If you find €10 left in your pocket, you can easily find your party, your lover, or simply someone to have sex with on the streets of Barcelona.

As a metropolitan city, Barcelona is full of places to visit. In such a city, everything can be found: from cathedrals, sunny beaches, green parks, museums, discotheques, to prostitutes. Many have heard, many have seen, many have witnessed… but little is known in depth of prostitution in Barcelona.

Creative cities like Barcelona have lots to offer to its residents as well as to its tourists. When sharing experiences to remember by a tourist in Barcelona, this city overflows with the spirit of energy and experimenting, every moment passes with ease, creative and relaxed vibes. Nevertheless, there is always a side of the city that we choose not to see, or we just don’t take the time to go into find out more about it.

The oh-so-popular Las Ramblas street along with the Gothic Quarter and El Raval are some of the main spotlights of the city. These places are filled with the ‘here I see you, here I catch you’ prostitution. 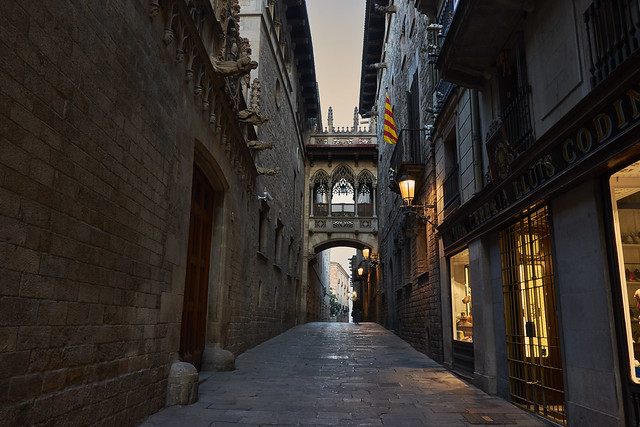 The OBLATAS Association agreed on an interview, speaking their minds and putting prostitution on the spotlight. This association was formed in Madrid in 1870 and arrived in Barcelona in 1898; they represent a group of activists that care about the empowerment of women.

El Lloc de la Dona (The Women’s Place) belongs to a religious congregation Oblatas del Santísimo Redentor. Women who find themselves in difficult times are taught their rights and duties as a citizen, as well as Spanish as a non-native language. To help women’s deprived situations as a sex worker, they are assisted in performing normal tasks, to get around and get used to life in Barcelona.

They give new opportunities outside of the depths of prostitution, for those who want to get out of it.

Being involved in prostitution and having a wish to change that position in life requires lots of effort. Because among those that like their job is a sex worker, the majority are forced to do so.

With no doubt, there are sex workers who willingly sell their body while enjoying it, and others who suffer being in this position. The latter usually find themselves under the sharp knife of underground criminals of Barcelona, working for their ‘masters’ involuntarily.

The trapped women are usually foreigners who have been tricked into coming to Barcelona to seek their dreams and getting away from precarious situations in their home countries. Women caught in the spider’s web of Spanish criminal clans are promised transportation from their native country, accommodation and a normal job in Barcelona.

But after arriving in the city of their dreams, they soon realise that not a word of the promise is going to happen. Barcelona becomes a prison, a city of their enslavement.

How does it all begin?

Still unaware of being a potential and future sex worker, their ‘journey’ starts by taking a loan of €40,000 to €60,000, intended to serve as a push for a fresh start. This ‘support payment’ is usually spent by the victim, trying to get around in their new place of living easily. But the gun’s trigger is pulled when the loan reaches its deadline to be repaid. Women who took the loan are threatened with their lives as well as their families’.

They are put in a corner, obliged to return the borrowed money. It is a nicely moulded scheme, constructed to ‘enforce’ women to get involved in prostitution by themselves, without physically forcing them. If verbal and psychological threats don’t work, physical would.

Their livelihoods are threatened and limited, as they are both physically and psychologically threatened and coerced to return amounts of debt. If borrowed money is successfully returned, chances are that marginal amounts of cash have to be shared or completely given to their ‘master’ or pimp.

What adds salt to the wound is that some sex workers travelling to major cities with big touristic populations like Barcelona know in advance the work they are going to do. Even though they don’t like the idea, they do it to financially to support their families, or to flee from the conflict situations in their native countries.

OBLATAS spokeswomen, Paz and Puri said: “Women join prostitution because of different reasons. Some join because they need to help their family out in their native country. Others, because they want to leave their country, which is in a difficult political state, war or crisis. The rest, because they are in a bad economic situation and don’t see any other solution or path to go down. Also, there are those who are forced and exploited to do it. However, let’s not forget about those who do so because they find it just like a regular job in which they feel comfortable.”

“The hard part is to start”

It’s a phrase most women engaged in prostitution agree on. Once they become a sex worker, they start thinking of it as a dignifying labour option. There are occasions where they set themselves a deadline to work as one, with a goal to save money for future dreams they want to achieve. Unfortunately, this deadline gets extended way too often than they thought.

In Catalonia, prostitution is not only the domain of foreigner women, there are many young middle-class women who, due to economic problems or to pay for their studies, beginning in the world of ‘luxury prostitution’, as escorts and companions. Their situation is completely different from that of South American, African or Eastern European women, who in many cases are victims of trafficking.

The majority of Catalan sex workers are independent, work freelance, keep what they earn and do not belong to any network. The prices they charge also vary a lot and are much higher, usually €200 or €300 an hour, and €1,000 for all night. If they are hired as travel companions, the prices are usually €1,000 per day, plus expenses. They are usually girls with studies that they dedicate to other professions.

“They have chosen the easy way”

Sometimes women seek help and eventually, they are able to get away from the depths of the prostitution holes. To start fresh in their life, in Barcelona they can find jobs in the sectors of home services, cleaning, caring for the elderly in care homes and such.

People sometimes wonder why they don’t work their way up from the beginning in another industry. The typical erroneous phrase that echoes as an answer is that ‘they have chosen the easy way’. In the cases of deceived sex workers, nothing could be further from the truth. We should wonder how someone would get a job in a country in which they are promised a flawless start, where they don’t speak the language, are not used to the culture, do not know any laws and find themselves in it irregularly? 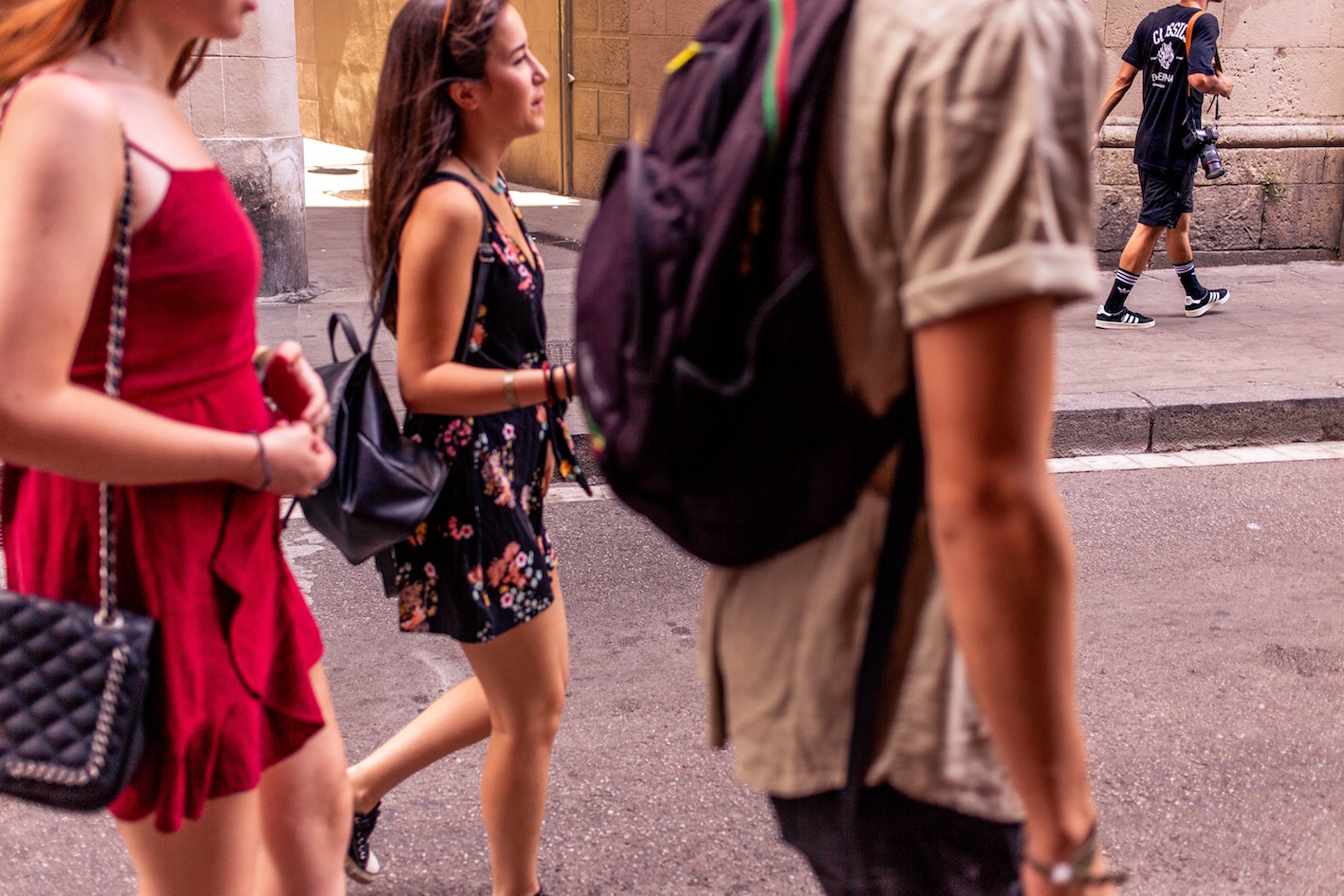 Women walking down the street in Barcelona [Unsplash: Charisse Kenion]

Imagine you are alone in a place you don’t know, carving a path for a better life. In such an overwhelming situation, try to figure out for a moment how ‘easy’ would that way be. One example we were given by the OBLATAS is that there are other ways to help oneself in such cases. But if an economic crisis were to happen, like Spain’s 2008 recession, possibilities grow high that the cleaning ladies will be left unemployed, because their jobs as cleaners and others having a job similar to this one are usually precarious. As a result, they return to be the freshly–caught meal of a starving snake.

When locals share their thoughts on this topic, the main reactions highlight being pressurised and unsafe due to very open sex trafficking on the streets of Barcelona, both during the day and the night. A major issue of the city, usually with the core at the narrow streets in the centre of the city, easily found if pursued. But the truth is that the population knows very little of the amount of prostitution going on in this city.

Why does no one in power take initiative to resolve what has become an infection in the city? ‘’You simply don’t say what you don’t want to be known,” said Puri and Paz. “No authority is interested and everyone looks away from the subject of prostitution.”

A drop of attention is only given by the local citizens to the street prostitution in Barcelona when its presence leads to violent conflicts or drug trafficking shown to the media such as mass TV and radio stations, as well as on the internet. An important and surprising fact is that this city is one the most of the most prostitution-populated in Europe. Spain has become known as the brothel of Europe and is the third biggest capital for prostitution in the world after Thailand and Puerto Rico. Amsterdam’s red-light district is given a lot of hype, but the case is that tourism prostitution here in Europe happens mostly in Barcelona, the city of a broken dream.  A plague will continue furiously infecting it if it’s not prevented. But prostitution will not stop by itself.

Not all sex workers become one for the same reason. Although, sometimes it is a matter of own will and perhaps passion, sometimes it is a matter of survival. Noticeably, the decision is the one that concerns us the most. It is definitely not easy to make such a choice if the conditions are those of subsistence, considering that no more options are possible for someone in a country with a context of precarious living.

People tend to believe this last statement is not true. Many argue that there is always another way, another path, another solution. It is worth wondering how a little fish lost in the ocean of Barcelona tries to escape from a huge fishing net.

By Emil Brierley
1 Mins read
We explore what Food for Life is and how they manage to feed over 200 people a day.
Culture

By Oriol Escude
6 Mins read
The unfinished Sagrada Familia has become known for tourism, crowds, kitsch souvenirs and paella restaurants. Its completion threatens the homes of hundreds of residents.
Lifestyle

By Daniela Ferreira Teixeira
5 Mins read
The impact of Covid-19 on the beauty industry has been immense, and made worse by a government that failed to understand and support it.