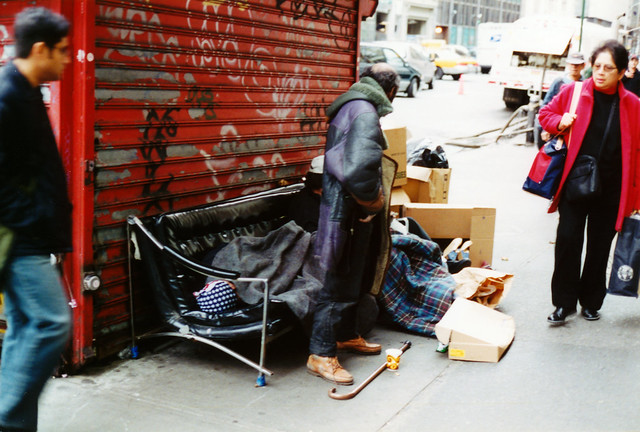 It was around seven in the morning. The smell of stale urine that had embedded in the tiles across the subways of New York had become more tolerable now and it was all starting to feel less foreign. As I struggled to drag my heavy suitcase up the stairs to another platform, I distinctly remember thinking to myself that I, a well-travelled woman, wouldn’t see much more American culture that could take me by surprise.

But then I saw it. What I had thought would be an empty carriage had in fact turned into a hotel for those without beds; the subways are where the homeless retreat for warmth, comfort and safety. Ironic, I thought, as I would picture the tunnels of London being built as an escape from a deadly war zone.

You would probably have to prepare for the severe neglect of humanity that the greatest city in the world has to show. It is hard-hitting and morbid. New York City’s homeless population represents 86% of the state’s total and if you think about it, this is hardly surprising; America is partly known for its abject, first world poverty with little to no welfare system. From mumbling schizophrenics with cats to half-naked drug addicts, I had seen the sheer amount of mental health issues for a week, the eccentricity of New York reeked of anguish but it certainly gave it character.

I disregarded the magical feeling I got from being able to splash the cash in Times Square. The big lights were far from inspiring, rather a hostile reminder into the sinister side of capitalism. All of the charm that came with New York had swiftly turned into darkness. The funny sirens had become haunting, the beautiful brutalist tiled stations had become clinical and the friendliness had become seedy. 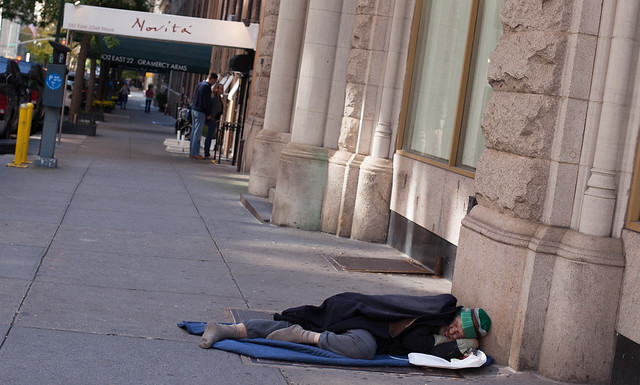 I could only imagine how chilling it must have sounded on 9/11, those distorted sirens howling like lost wolves beneath the concrete walls. One, two, three, four… lost souls, lost stories, all sprawled out across the plastic seats.

Men with their heads hanging down beneath their legs, others staring blankly into space. You would almost feel the heroin shoot up inside of you, as you would try to ignore the aggressive detriment that these corrupt and unjust systems all around the world have on vulnerable people.

Just how bad is it? Some statistics might help us to understand, and perhaps I should start off by saying that there are more than 42,000 children sleeping in sheltered systems.

That means that the American government has failed just as many, and it is breeding more mental health issues with a vengeance like no other. As if that wasn’t bad enough, in 2018 the Trump administration published a proposed new rule that would change how immigration officials inside the United States would get to punish migrants who are deemed a “burden” to the government. Statistics published in The Nation suggested that an estimated 65,000 to 115,000 would fall into poverty due to this “deterrent” effect of the public charge rule in NYC.

It is separating families, hurting children and continues to stir an evidential condition of hate; though this problem is at large a welfare issue, it’s also a racial one. African-American and Latino New Yorkers are disproportionately affected by homelessness, counting for approximately 89%.

“Because there is no federal law mandating sick leave in the US, it makes it even harder for those who can’t afford health care, it’s a vicious cycle that isn’t being fixed,” said Charlie, a 34-year-old photographer and local who is struggling to pay his bills.

These mundane but important remarks regarding livelihoods in America are all the more worrying when you consider other aspects and sick pay is something that we all take for granted. Whether it’s due to domestic violence, a lack of affordable housing, lawful (or unlawful) eviction, a natural disaster or even gentrification, there really are no easy ways out for those who are crumbling into a serious case of first world poverty. 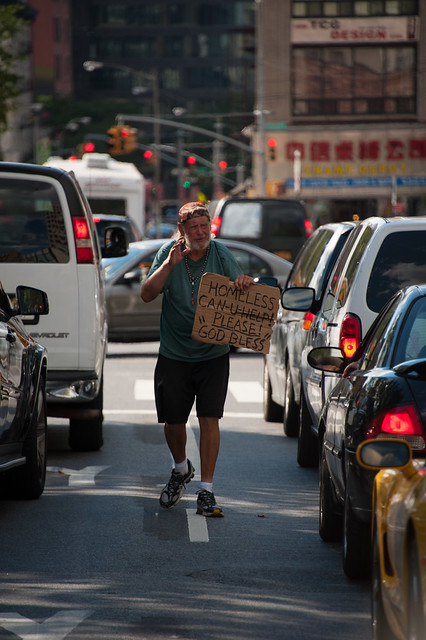 Domestic violence, in particular, has a lot to do with the lives of those in pain, and it is thought that one in five families who are now on the streets have come from this type of broken home.

Fearing for their lives, people all over the world are fleeing, often with children and no place to go. Fortunately, there are some things that have been put in place to help people put into “situational” homelessness.

One example would be where apartment management companies have partnered up with non-profit organisations to place program participants in entry-level jobs and housing at safe communities.

It’s called a multi-family industry, whereby they benefit each other in providing shelter or service. It is one of the few road backs to self-sufficiency, and should, in turn, be used to its maximum potential – this thriving and expanding apartment industry may be feeding into gentrification but at least it gives people opportunities.

Opinions also vary. We live in a world where they swing like a pendulum, and it’s difficult for us to come to a definitive solution.

Shiba Perry, 28, from Michigan expressed his views on how gentrification might be the shimmering hope for those on the streets – “I think it’s important to know that not every area in New York is in poverty, and every city has differing industries. Generally, it’s cultural indifferences that stop people from actually working towards escaping it.

Some of them are raised in such an environment where they have subdued their self-esteem and self-worth to selling drugs, performing criminal acts, and working part-time jobs because that is what the people who are around them are doing, and they are just carrying along because it’s what they are used to. [Gentrification] is needed to encourage healthy environments and lifestyles.”

The problem is not that there aren’t enough homes. The United States, by design, has a system that keeps people out of empty properties. Even if a city like New York was to provide entry to hundreds of habitable warehouses, let’s not forget that where there is poverty there is violence. In 2018, CBS2 got a first-hand look at the struggle of families too scared to seek shelter, instead opting to live out on the streets.

Also in 2018, a 56-year-old man was discovered laying on a bed in a pool of blood with his neck sliced and wrapped in wire, inside a room at the Bellevue Men’s Shelter. His body was wrapped in plastic and taken into an ambulance outside of the Bellevue. His blood was bleached away. The homeless continue to sleep on yoga mats on the same grounds, dreaming of their traumas, their lost children and their next hit.

Whilst normal members of society gathered together to eat copious amounts of meat during Thanksgiving, others were building makeshift homes out of cardboard and plastic. It’s somewhat self-sufficient, considering that our modern condition is to be helplessly reliant upon previous generation’s inventions, such as electricity and gas. 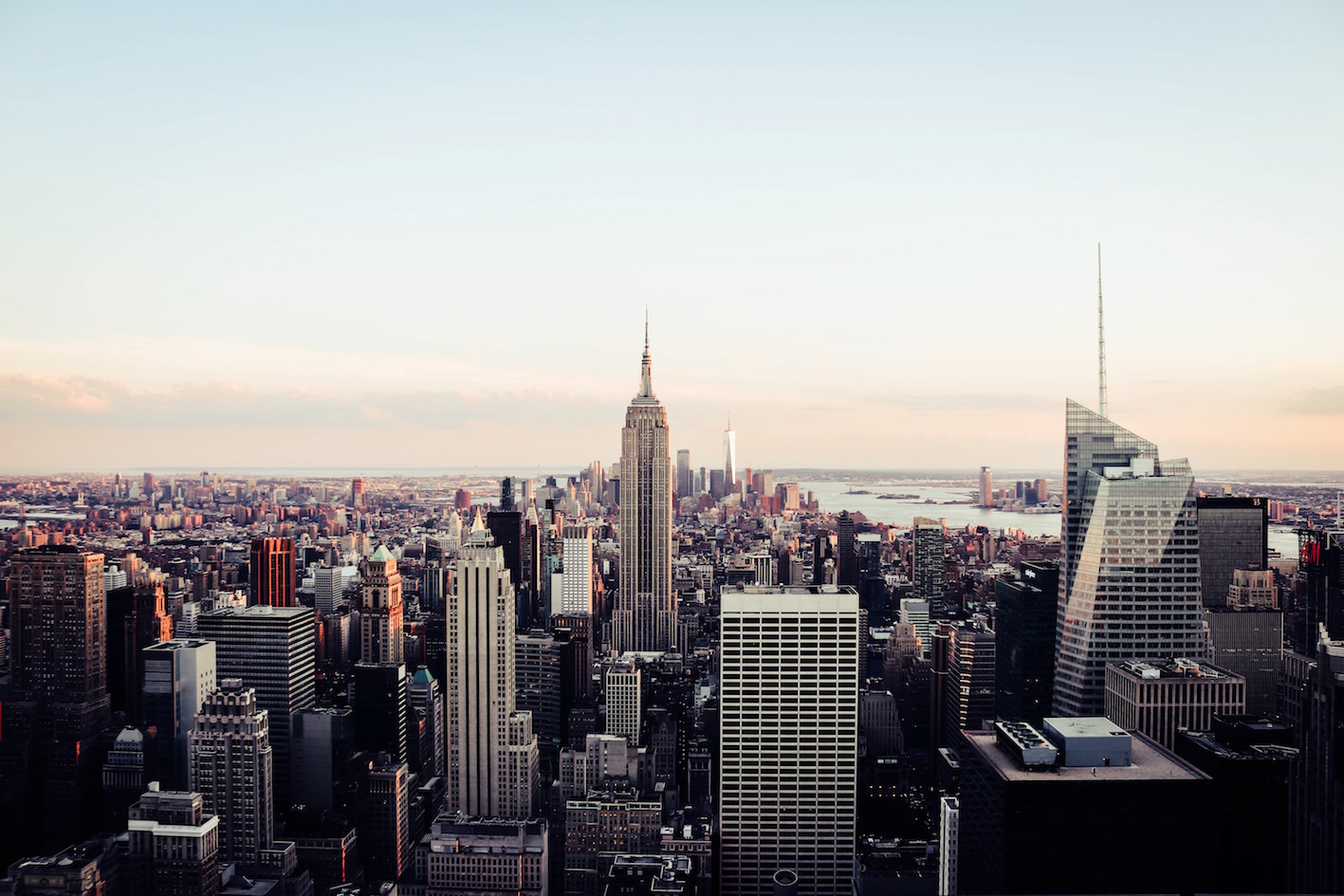 As our survival instincts simmer beneath the surface of our unscarred skin, the homeless are in survival mode every minute of the day and you’ve got to give it to them. Sleeping on a concrete floor has to be traumatic. In 2018, New York City limousine driver Douglas Schifter shot and killed himself in a rental car in front of NYC Hall in lower Manhattan. After having just been put out onto the streets (despite having an income), Schifter left a suicide note explaining that his act was in protest against the political and corporate establishment for “systematically lowering the standard of living for professional drivers”.

“Companies do not care how they abuse us just so the executives get their bonuses,” Schifter wrote. “They have not paid us fair rates for some time now. Due to the huge numbers of cars available with desperate drivers trying to feed their families they squeeze rates to below-operating costs and force professionals like me out of business. They count their money and we are driven down into the streets we drive becoming homeless and hungry. I will not be a slave working for chump change. I would rather be dead.”

Those in poverty will undoubtedly need years of support to get over the severe mental and physical detriment that it has caused them, and this is where some might come to realise that it’s really not that simple. What’s simple is this, though: it’s a blindingly obvious argument that corporate greed is the root cause of this highly concentrated poverty, and we’re all guilty of enabling it. What lies beyond the Tower of Trump is an exploited opportunity into our hedonistic whims.

New York is pretty god damn incredible, so if you’re thinking of visiting then remember that even the dark aspects have charm. Its reputation of being the “city that never sleeps” is warranted, the architecture makes you feel just as tiny as when you read about space as a child, and one visit up the Empire State can make you feel invincible. The flippant division between the classes is aggressive and apparent but there’s so much more to it than that if you’ve got the dollar to spare.