Located 120 kilometres (75 miles) from the Romanian capital of Bucharest, in the city of Pitești, lies Smeura; it is home to more than 6,000 rescue dogs, making it the largest animal shelter in the world.

Smeura reflects not only Romania’s troubling past, but also how the country still struggles with the aftermath of that today. Thousands of strays have been brutally killed in an implausible attempt to battle overpopulation, sadly with no effect, as an estimated four million strays are still living on the country’s streets today.

In Pitești, it is not unusual to see dogs left to die on the side of the road with broken limbs or having rocks and rubbish thrown at them. It is hard to comprehend the mentality behind such cruel acts towards innocent animals – perhaps it can be explained as the damaging result of a corrupt communist regime, the consequences of which remain deeply rooted in Romanian society today.

During the rule of dictator Nikolae Ceausescu, from 1965 to 1989, people were forced to leave their homes and move into small apartments in the city. Their living standards were neglected and they had no choice but to leave their pets behind, which ignited the evolution of an ever-growing population of stray dogs throughout the country.

When Ceausescu’s regime collapsed after he was executed in 1989, the stray dogs became victims of his corrupt government for years to come. 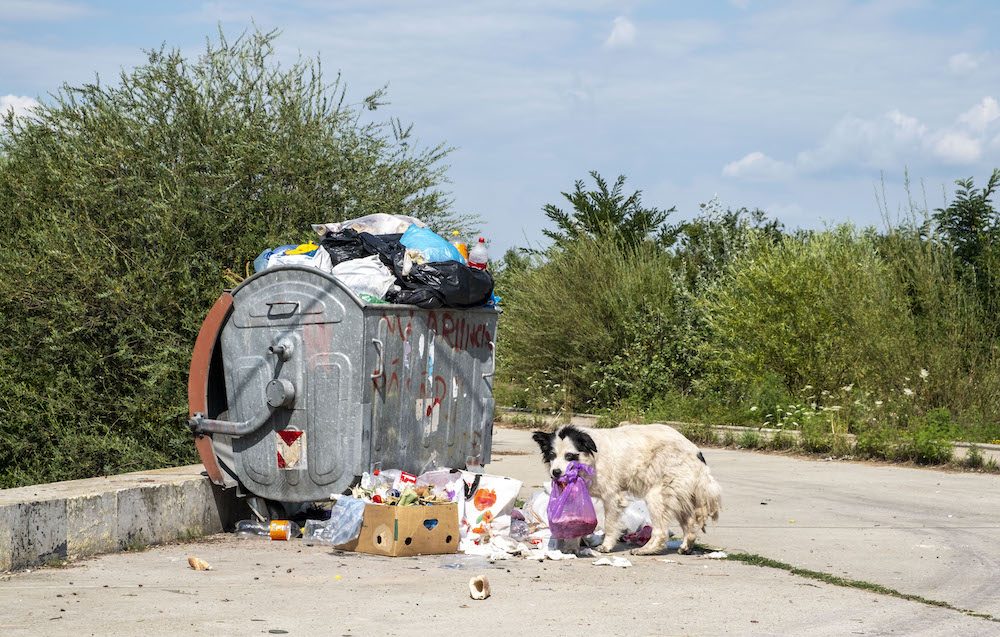 Smeura was founded in 2000 when Ute Langenkamp bought what had previously been a fox-fur farm which used to be owned by the communist regime. After the farm went out of business, Langenkamp witnessed how the government was simply killing thousands of street dogs.

Truckloads of living dogs were thrown into deep pits, which were then filled with water and eventually covered with dirt. There was no way Langenkamp could forget what she had seen, which is when she pleaded to the major of Pitești that she would take responsibility for all dogs in the town.

The mayor agreed – without knowing how many dogs there were, and having no money or infrastructure, Langenkamp’s heroic act ignited the fight against animal cruelty and gave thousands of dogs hope for a better future. The killings stopped immediately.

Matthias Schmidt has been managing the shelter since 2012 and is chairman of the German charity responsible for Smeura, Tierhilfe Hoffnung. Schmidt recalls arriving in Pitești with Langenkamp for the first time: “We were faced with catastrophic conditions. An abandoned old fox farm, with no water, electricity, employees or food, there was nothing. And it took us years to get everything running.” 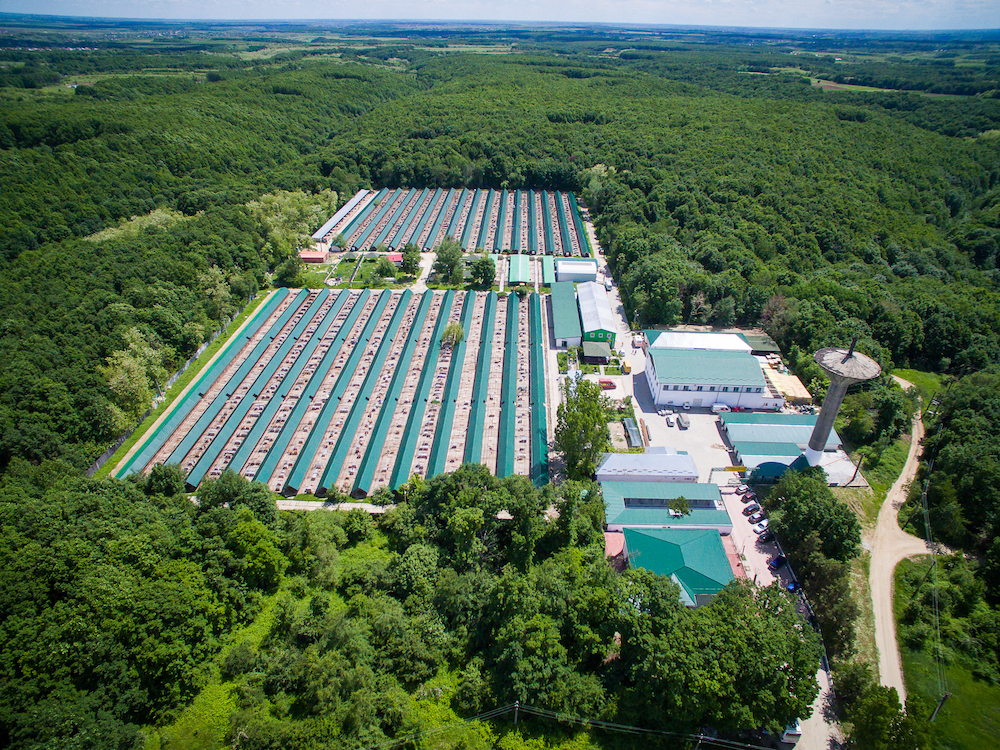 The 4.5 hectare complex is surrounded by a large forest near the city of Pitești [HuibRutten] 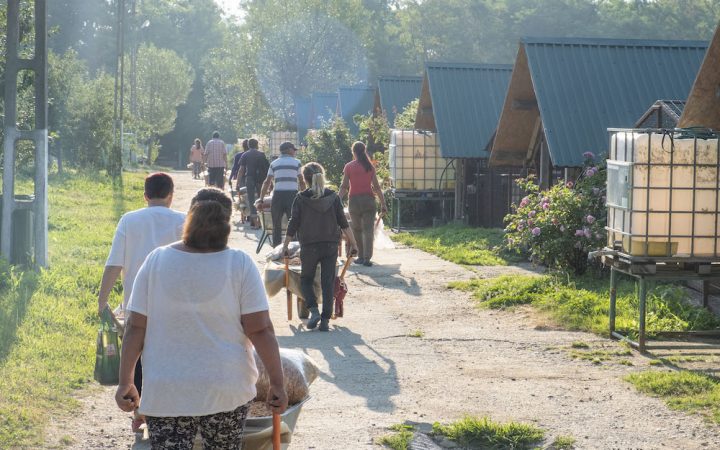 Smeura’s staff start early, pushing wheelbarrows of food; the dogs are fed in a strict order and at the same time as those across from them to avoid jealousy [HuibRutten]

Years later, the charity has managed to construct a shelter housing thousands of dogs, with a well-functioning infrastructure and a strict feeding and medical routine to make sure the dogs receive the care they need. For the 92 full-time employees, the day starts at 8:00am, when they carry 2.7 tonnes of food through the 116 metre-long rows of paddocks with 140 to 180 dogs on each side.

This is followed by a cleaning process that covers the whole 4.5 hectare compound, after which there is time to care for some of the dogs individually with activities such as medical examination, grooming and walking.

In addition, there is separate housing for dogs in need of special medical care. The dogs that come in from the killing shelters have often had traumatic experiences from which they need weeks to recover. Alongside these is a heated complex for 776 puppies, as well as more sensitive older dogs.

Due to the tremendous number of strays, the team’s initial goal was to castrate and chip the dogs and then bring them back to where they had been found, with a source of food and water that was refilled on a daily basis. Their strategy proved successful, with 35,000 strays castrated and chipped since the shelter opened in 2013. The ultimate goal was to castrate every stray in the country, which would eventually allow the population to decrease naturally. 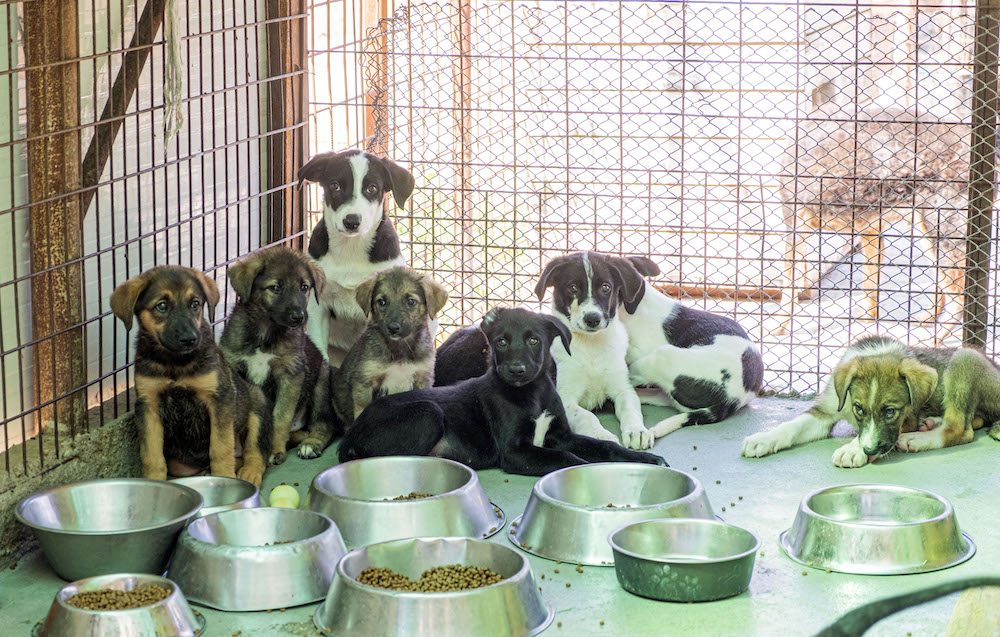 The dogs live in separate paddocks, often in groups of five, nine or 12 [HuibRutten]

However, in 2013 there was a turn in events that meant a huge step backward for the fight against the overpopulation of strays, when a four-year-old boy was bitten to death by two dogs.

The media portrayed the event as street dogs having attacked the boy on a public playground in the middle of the day. A few months later, it was revealed that the boy had entered private property and was killed by private guard dogs. This, however, was not presented in the media and the case remained unclassified.

Schmidt says the effects of this were swift and brutal: “Within a few days, or rather 72 hours, the government had implemented a perfectly thought-through law, legalising the killing of stray dogs. At this point, it had been passed by all courts and was declared effective immediately. Also, months before, an EU-supported animal shelter, or rather killing station, was built and was completed, long before the boy was killed.”

Some have speculated that the reporting of the event may have been an orchestrated act to pass the killing law more swiftly. “There is more, that was not portrayed by the media – the doctor who treated the boy went to jail for an unofficial early release for a funeral, the two dogs were killed immediately without being examined, and the man who owned the private property was part of the government and left the country shortly after,” Schmidt states. 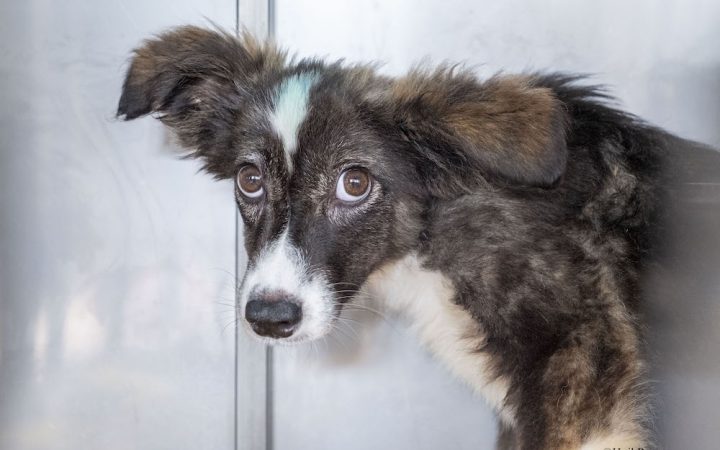 There seems to be an increasing amount of evidence, that the event became the new gateway to re-start the brutal killing of dogs and turn this act into a form of business. The killing of strays became legal under the “Stray Dogs Euthanasia Law” and the EU and OIE (World Organisation for Animal Health) supported the opening of killing shelters, under the guidelines that dogs had to be kept for 14 days before they could be euthanised.

However, the OIE’s lack of awareness about the execution of these guidelines, demonstrates a flaw in the system, as it can be manipulated easily. Rather than implementing an effective strategy (such as castration) to stop the population from growing, it has become more common that people are supporting the fraudulent business scheme of catching and killing.

Financially, the EU provides up to €75 (£64) for the catching, 14-day holding and euthanising of a single dog. In reality, however, the money is lost to the pockets of criminals and as a result, the dogs suffer in inhumane conditions. They are often kept with no food, water or space, laying in their own excrements for days, until they are eventually brutally beaten to death.

This raises the question – how can the World Organisation for Animal Health and the EU be seen to be supporting such a cruel system? Unlike the killing shelters, Smeura receives no financial support and is funded entirely by donations.

As long as these schemes continue to exist, a future in which the stray dog population is controlled is hard to imagine. This is what remains the hardest part of Schmidt’s job: “It’s very emotional and with time, this work does something to you. Something breaks in you. The solution is tangible, but we need to shut down this ineffective, brutal reality first.” 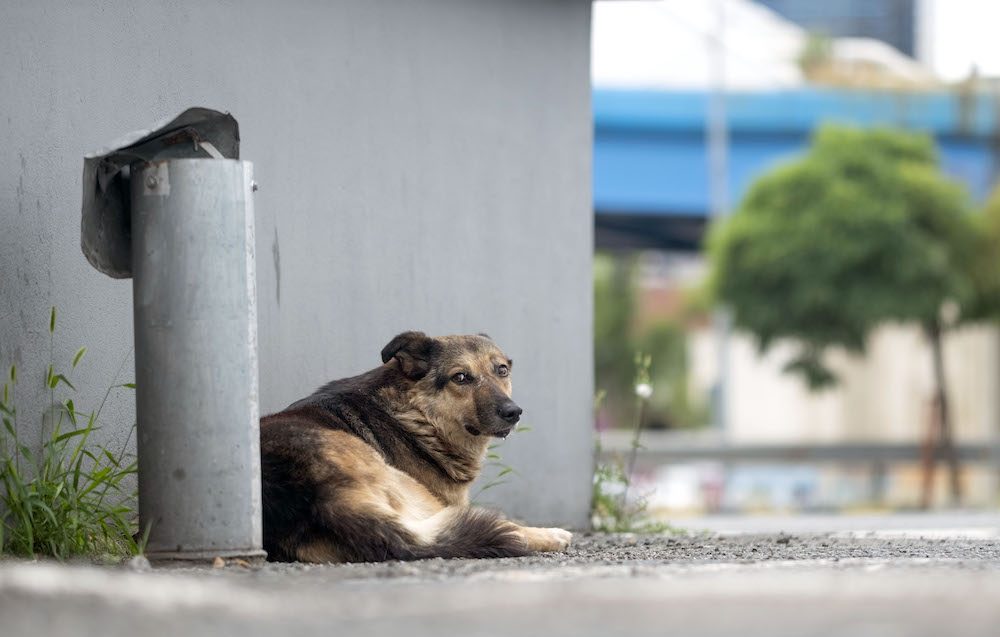 Dog catchers show no mercy when bringing animals from the street, as they are rewarded by money from the EU and OIE [HuibRutten]

Schmidt’s team has managed to negotiate with several killing shelters who have agreed for Smeura to take the dogs that are left after the statutory 14-day period. However, terms and conditions seem to vary, as cruel manoeuvres and sadistic games by the managers often lead to heated situations.

“It’s hard to remain calm in some situations,” Schmidt says. “There are moments where it’s hard to control your rage. I have often thought about lashing out, that way I could potentially help myself, but this would in no way help the suffering dogs.” 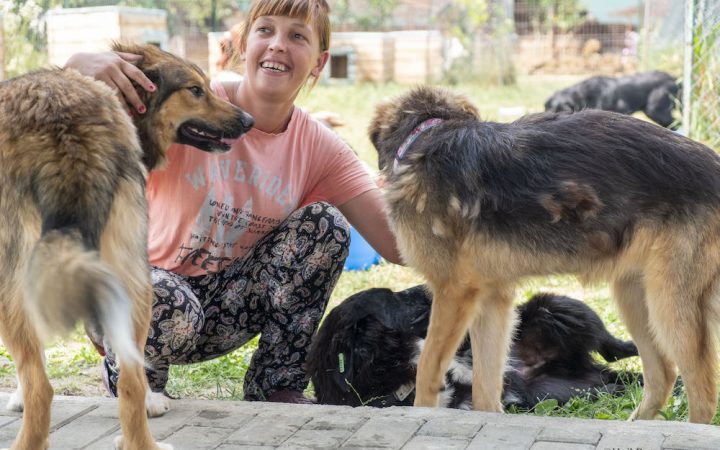 Most employees in Smeura are from Romania. They are trained on-site as caretakers and are passionate about their job [HuibRutten]

The introduction of the law has put an incredible strain on Smeura, as they can no longer release dogs back onto the streets safely and there is no way to re-home them within Romania.

No doubt there are suitable homes in the country, but most people with an animal-friendly mentality already own several pets. Therefore, it remains unreasonable to re-home them here and the only way to secure a safe future for them is to take them out of the country.

Over the years Tierhilfe Hoffnung has partnered with 90 shelters in Germany, and dogs are transported to them on a weekly basis – up to 3,000 leave Romania every year. The animals are given official EU pet passports, medical checks, identifying chips, castrations and behavioural assessments, and then embark on a long journey (of up to two days) that gives them a chance at a better life. Once they arrive in Germany, they are assessed and cared for during an acclimatisation period, during which they can build confidence and be checked more thoroughly on behaviour.

While the staff at Smeura feel it is important to save as many dogs as possible from these horrendous conditions, they also want to implement a long-term solution to secure a change in the future.

Another of their recent projects aims to tackle exactly that – the conversion of two old hospital vans, equipped to castrate dogs more accessibly. “We travel to more remote areas on a weekly basis and castrate up to 20-30 dogs a week. We go from home to home and the people accept our help,” Schmidt told Artefact. 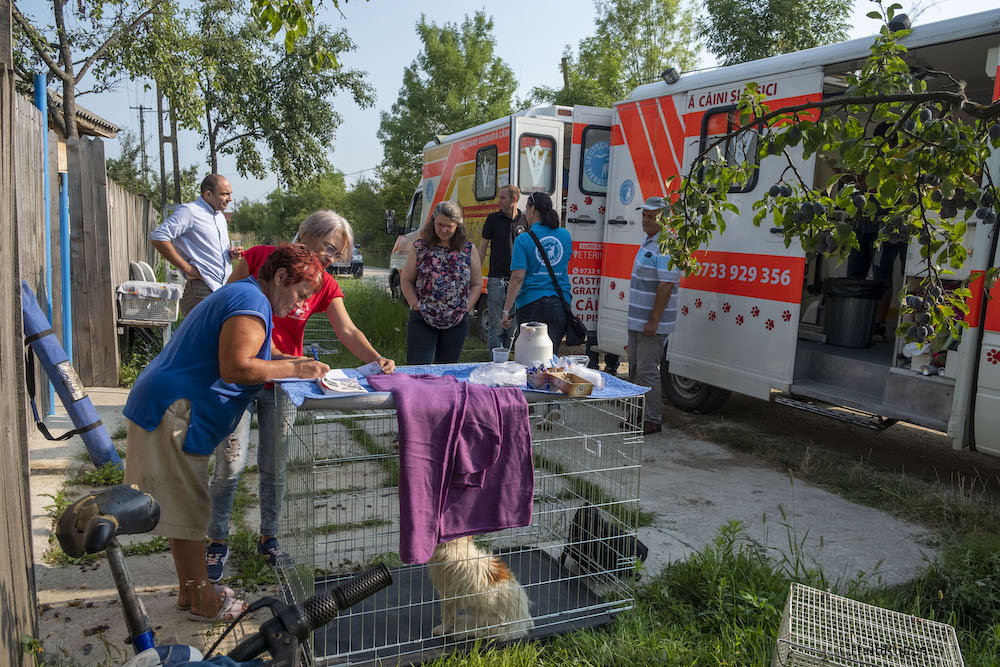 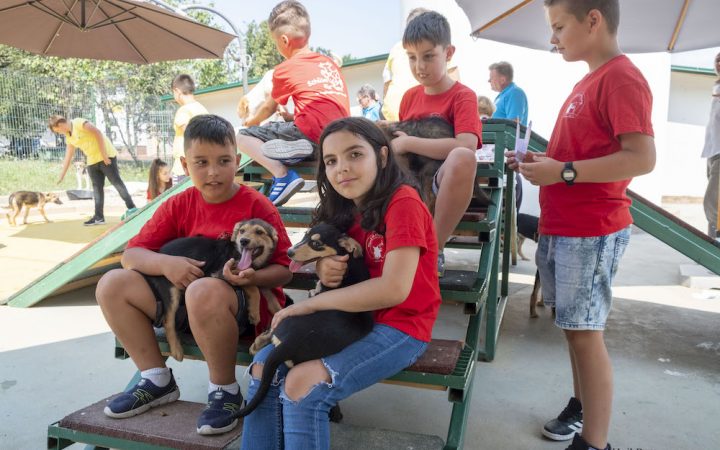 Another focus is on engaging with local schools in the area. “We notice that children and young adults are open and interested in living differently. You can tell that parents have had dogs on chains for years and project that mentality onto their children,” says Schmidt. “Therefore, it is so important that we keep working on our school projects and enlightening programmes.” The Smeura team hope that the younger generation that will grow to have a healthier mentality towards the welfare of animals.

The dogs have become victims of immoral human activity and are no different to the four-legged friends we have at home, wherever that home is in the world.

It is important that we do not turn a blind eye only because it is happening beyond our horizon, and help support international animal welfare for the sake of giving every dog the chance at a good life.

Schmidt believes that: “Something will change in Romania. Politically, it will continue to be difficult. But, I hope the day will come where more people realise that it’s not the right way. We will not give up.”