Cho Nam-joo’s bestseller, Kim Ji-young, born 1982, was published in 2016 and has sold more than a million copies since. It was crowned as “one of the leading feminist novels in Korea”, but led to controversy within the country.

The novel follows a woman in her thirties, balancing her time between work and family and struggling with gender discrimination in her everyday life.

The novel aims to represent a large demographic of women; Kim Ji-young is one of the most common names in Korea and in choosing this to be lead characters name, Nam-joo hopes to portray the life of a majority of the female society.

Now the novel’s movie adaptation has been released, which has further contributed to the ongoing feminist battle in South Korea. Not only was Nam-joo criticised and encouraged to fail, the leading actress Jung Yu-mi was condemned, especially online, for taking on the leading role.

Korean student, So Young explains that any association with the novel or film is frowned upon. “There are incidents where Korean actors, singers, just mentioned to have read the book, and they were criticised, people just assumed that they are feminist,” she says.

Over the years, the term feminism has developed many negative connotations and anyone who encourages it, is considered radical and a threat that intensifies conflict between genders.

In 2018, pop artist Son Naeun received a backlash on Instagram, having been seen with a “girls can do anything” slogan on her phone. Naeun was so harshly criticised, that she later deleted the post.

Haram, who lives in London but recalls many conversations with her friends back home in South Korea, says: “Feminism in Korea has a really bad reputation because a lot of feminists are radical. The feminists say that women are just better. Instead of asking for equality, they try to show that women are better than men.” 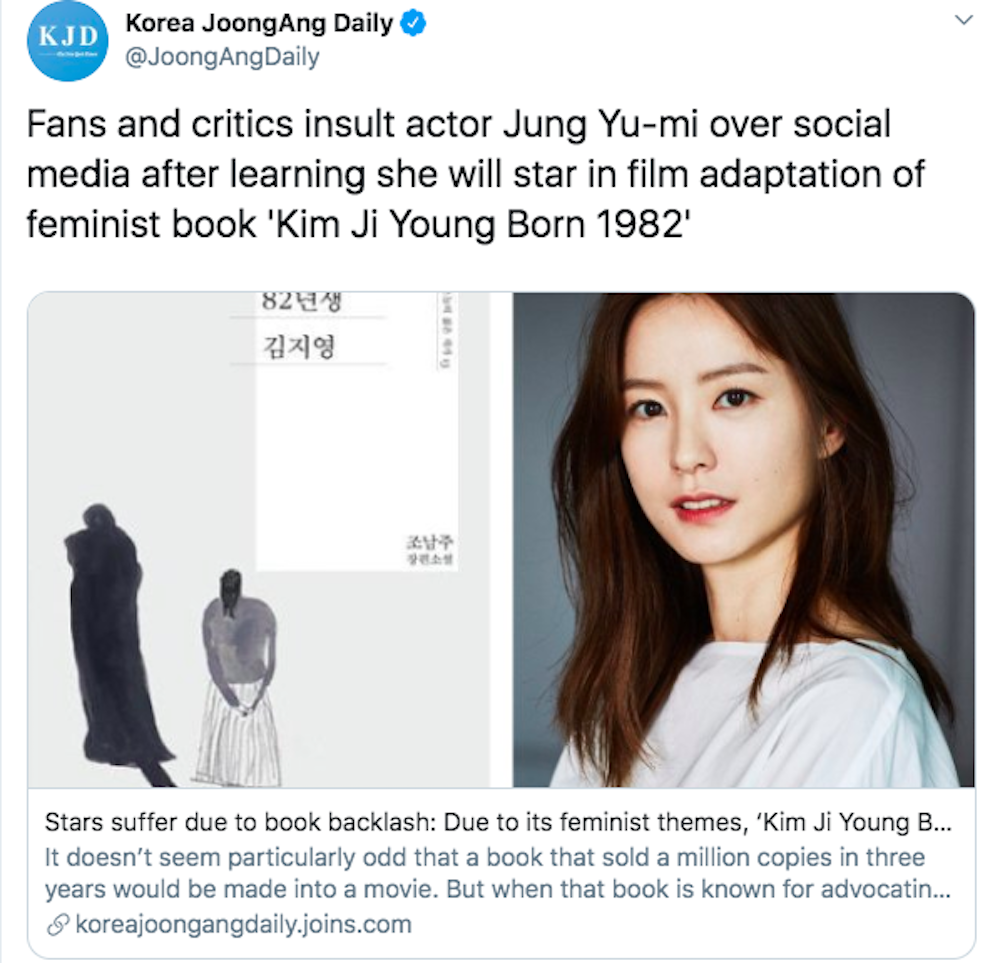 Social media has been used for critciism of the author and lead actor [Twitter:Korea JoongAng Daily]

Although not portrayed in western media, the #MeToo movement reached South Korea at the start of 2018. At one of the protests in central Seoul, almost 200 women came forward, publicly speaking about their experiences with sexual assault.

However, the movement was not as well received as in other countries. After South Korean actor Jo Min-ki committed suicide following sexual assault allegations from eight women, many people chose to blame the #MeToo movement, referring to it as a ‘witch hunt‘.

Haram hopes that the movie might create a more positive awareness for gender equality in South Korea: “It’s an independent movie and it hasn’t been advertised a lot. But, I assume since it’s tackling such a big issue, it’s going to be a really overwhelming movie. It is not for making money, it’s for raising awareness.”

So Young adds: “I bet there is going to be a lot of controversy and criticism because it has different views and Koreans get really sensitive about having different views, but I am really looking forward to watching the movie.”

Despite being a fictional character, Kim Ji-Young represents the voice of many Korean women. Author Nam-Joo explains: “Kim Ji-young’s life isn’t much different from the one I have lived. That’s why I was able to write so quickly without much preparation.”

The original novel has had critical success in neighbouring countries including China and Japan, and is considered the second-best novel in South Korea, following the The Vegetarian, published in 2007.

Others have welcomed the new film [Twitter:Simon & Schuster UK]

The English translated version will be available in the UK at the start of 2020 and as translator Jamie Change told the BBC: “the book will resonate with people in Western cultures. I think we tell ourselves there are certain aspects of misogyny that is specific to Korea or Eastern culture and doesn’t happen anywhere else in the world but that’s not true.In fact, the book is likely to bring awareness of the South Korean wave of feminism in Western Society.”

Feminism, specifically the #MeToo movement, has gained a lot of attention in western countries, but the movements in Asian countries have not been followed closely.

“Outside of Korea people are not really talking about the Korean society and Korean issues. There is a lot going on but no one really knows about it,” So Young explains.

Kim Ji-Young, Born 1982 not only has the potential to raise awareness for feminism in South Korea, but to connect with women all around the world.