Protestors have taken to the streets of London to campaign against charging migrants for treatment which they say makes the NHS discriminate against them.

The group assembled outside the Royal London Hospital in East London as part of the protest, organised by Docs Not Cops, a campaign group comprised of NHS professionals and patients, alongside a number of other grassroots organisations who are calling for radical changes to the NHS system.

“The disease had infected his hip bone … he had to have a hip replacement. After that, they whacked him with a bill for £54,000.”

It’s two years since the government introduced rules which required that patients ineligible to free care should pay up-front for non-urgent secondary care (including paediatrics, antenatal and maternity care, and cancer treatment), a move which campaigners say has created a hostile environment within the NHS.

They say the charging policies enforced in October 2017 currently affect as many as 600,000 individuals between rejected asylum seekers, under- or undocumented migrants and people who overstayed their visas. Of the 600,000 people impacted by the legislation in question, 120,000 are estimated to be children.

In the demonstrators’ view, the charging regulations that the government introduced as a way to discourage “health tourism” have ripped the NHS founding principle that everyone has a right to treatment regardless of who they are and where they come from. 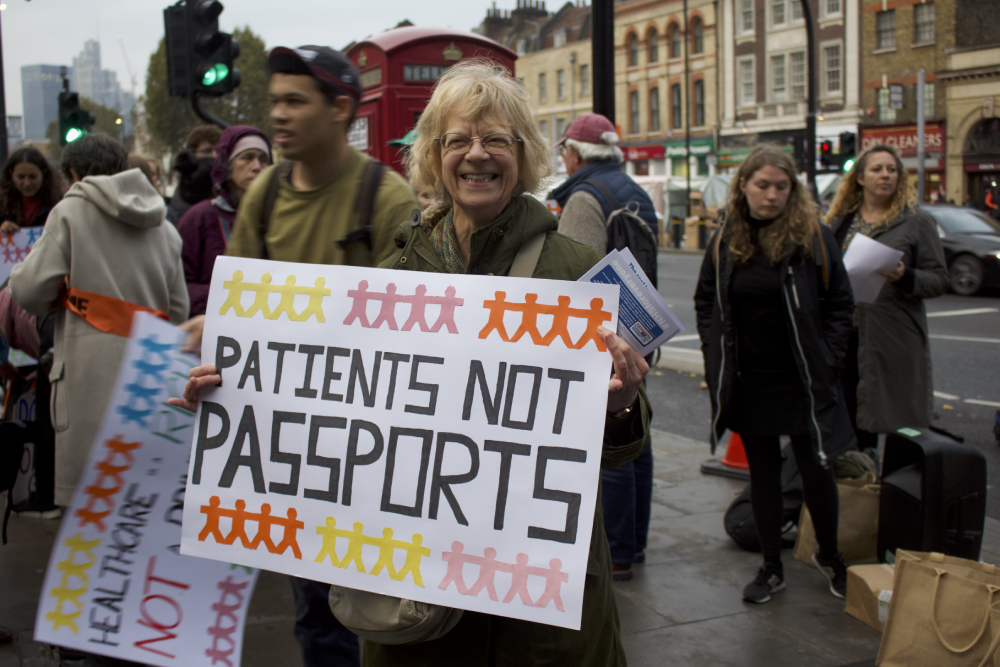 One of the protestors, Luke, a senior nurse in the NHS told Artefact that the hostile environment has drastically compromised healthcare workers’ primary duty of care.

“I started working in the NHS because I believed that care should be given on the basis of need, not ability to pay, but the charging regulations brought in under the hostile environment have completely overturned that. It’s becoming increasingly impossible for me to care for and build trust with my patients when they know I might ask them to pay.” 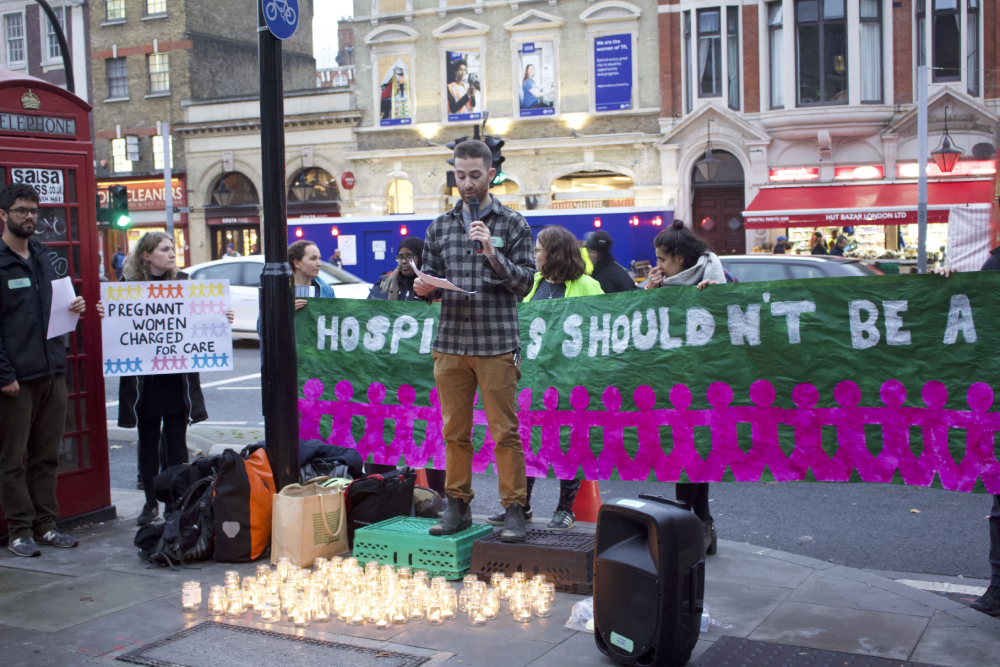 Protesters shared stories of those who had suffered at the hands of NHS up-front charging.

In addition to that, charging regulations seem to have created a climate of fear that is currently deterring migrants from seeking treatment.

Aliya Yule, a member of Migrants Organise, a grassroots group which co-organised yesterday’s protest, said: “The introduction of charging for migrants has meant that many people are scared to seek the care they need. They are fearful of healthcare providers reporting them to the Home Office and landing them with extortionate bills, rather than helping them when they are unwell. Everybody who cares for the NHS should be worried.”

The end of up-front charging was not the only action yesterday’s protesters were asking from the government. In fact, demonstrators also took a stand against pre-treatment ID checks, the immigration health surcharge and, lastly, the sharing of data about overseas patients with the Home Office.

Although such a practice was officially stopped in May 2018, with the government ensuring it would only request information on migrants suspected of “serious criminal activity”, today’s protesters claimed the situation still continues, albeit in more surreptitious ways.

Earlier during the day, the same group of campaigners that organised the evening demonstrations had staged a blockade in front of the NHS England building in Elephant and Castle, highlighting their concerns to commuters coming out of the nearby London Underground Station.

At some point during all of yesterday’s protests, demonstrators took the time to commemorate those who lost their lives or were severely harmed by the hostile environment.

Over the past two years, a number of incidents have shown how deadly the charging regulations can be. Famous is the case of Elfreda Spencer, who, after being long denied urgent cancer treatment for not being able to pay an up-front bill of £30,000, died at the Royal Free Hospital in January 2018.

Although the most dramatic cases have indeed received considerable media coverage, it is common for most smaller cases to go completely unreported.

Terry Day, a member of Docs Not Cops, told us of one patient affected by tuberculosis (TB) at her local hospital. “This man was meant to be exempt from charging because [tuberculosis] is an infectious disease. He was given treatment but the infection had already gotten quite bad. That was because he didn’t know he was entitled for treatment and was late in seeking medical care.”

“Since the disease had infected his hip bone completely, he had to have a hip replacement. After that, they whacked him with a bill for £54,000. That was challenged and it was eventually withdrawn but it absolutely terrified him. It was absolutely horrendous for him.”

In an earlier statement about the protests, the Department of Health and Social Care said: “All NHS trusts are legally obliged to check whether patients are eligible to free secondary care, but we have exemptions in place for the most vulnerable, including asylum seekers, and our guidance supports administrative staff in hospitals to make fair decisions on charging in the best interests of patients.

“Non-urgent treatment must be paid for in advance by chargeable patients, but treatment that clinicians consider is immediately necessary or urgent will never be withheld.”