Football is an unforgiving game; from grassroots right up to the Premier League, it’s savage and as a young player, I learnt this the hard way.

My first game of Sunday League was a baptism of fire. The lads in my village were short in numbers and on a disgusting Sunday morning in March, I got the call-up.

Off I went, starry-eyed, looking forward to my first game of real-life adult football. I was ready to complete my transformation from the under-17s average right-back to a rampaging right-winger.

Jesus Christ was I wrong. In the next 45 minutes, 16-year-old me was subjected to some of the most aggressive and downright dirty things I’d ever heard.

I remember at half time, hoping my Mum would whisk me home, wrap me up in a blanket and make me a cup of something warm. She never came. Looking back, I’ve seen and heard far worse on a football pitch since that fateful day.

There’s something about getting up on Saturday and Sunday mornings that can drive men to the very brink. We didn’t win. I didn’t score and to be honest I spent most of the 90 minutes praying the ball wouldn’t come my way, which might have given their left-back a chance to follow through on his promise to “break my fucking legs”.

Once you step out across the white line onto the pitch, the rules and regulations of the real world just seem to melt away. It’s far from what could be considered a ‘safe space’. Equally, the conversation surrounding football seems far from a safe space to talk about big issues.

But what if things were different? What if football clubs, with all the passion and camaraderie they bring, were a place to go to feel comfortable, accepted and free from judgement?

Britain’s LGBT football clubs have created that space. Up and down the country, they offer a place for people from all walks of life to indulge in their love of the beautiful game, all while working to provide a strong sense of community and change perceptions about what it means to be a ‘footballer’ in today’s game. 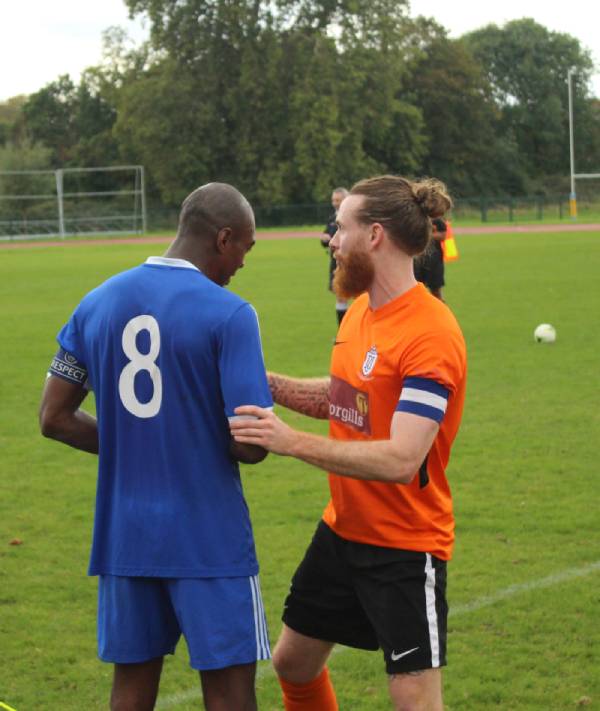 “I think the fact that there aren’t any openly gay players in football is a sports wide issue. Obviously they are based around a traditionally masculine environment, traditionally team sports as well, but I think there are a lot of people who can be doing around how we create safe spaces within team sports, and how we can increase that representation,” Jay Lemonius told me.

Jay is captain of Stonewall FC, and I had headed down to Barn Elms where they play their home games. During my research this name kept popping up. Stonewall FC this, Stonewall FC that; and that’s not for no reason. They’ve been tearing up the LGBT football scene since they were formed in 1991.

“We’ve had a couple of challenging issues, but I think what’s important and what’s been awesome is the league has been able to work with the club to correct some of those issues and process those complaints,” Jay told me.

They also work very closely with the pride campaign to raise the representation of LGBT people everywhere and challenge negative stereotypes. This led to a game at Wembley last year, playing under a rainbow coloured Wembley arch to mark the partnership the pride campaign within football.

I felt slightly intrusive. Mike Sholly, who runs the social media, and the team were very welcoming, but it was game day. Throughout our chat before the game Jay kept getting anxious looks from his manager, Eric, to hurry up.

They ply their trade in the Middlesex County Premier League, a high standard. Chatting to me rightly wasn’t the main concern of the day. The FA does a lot to help clubs like Stonewall feel appreciated but also provides them with support.

“We’ve come a long way, but it’s definitely been a step change, over the years we’ve had our challenges, but we’ve always had a secure level of support form the league in terms of processing any challenging issues that might have happened,” Jay said.

At this point, I’d kept him too long: he was summoned by the gaffer Eric and literally ran off into the changing room. They were playing Pitshanger Dynamo FC who sat third in the table, so I can’t blame Eric for hurrying us along.

The FA does all it can to try and challenge negative stereotypes within the game. A few years ago the rainbow laces campaign was set up – something most football clubs up and down the country could get on board with. It’s pretty self-explanatory; you all wear rainbow laces. It is a show of solidarity with gay footballers that it’s an environment where they are welcome, safe and can be involved with teams whether they are LGBT or mainstream; what’s not to like?

“We’ve got a fantastic relationship with the FA which has been cultivated over many years, you know, the FA comes under a lot of criticism but it does a hell of a lot of good work, whether it’s to do with racism or homophobia,” Eric had managed to creep away from the warm-up with about 10 minutes until kick-off. He told me about the sort of stuff they do down at Stonewall. “I joined Stonewall football club in 2001 as a player, and then became a manager in 2006.” You could tell Eric knew his football. He knew what it was all about.

“As time has gone on the feel around the club has generally become more and more positive, certainly when I first joined the club there was a lot more curiosity, there was more discrimination in the game that we played.” By the sound of it, the football club, along with the pride movement, has come on leaps and bounds. But one thing that was made very clear and that I could see from the quality of the football is they wanted to prove that no matter what your sexuality, football puts us all on the same level.

“There are obviously players who played in the 90s who can tell you some real horror stories, but from my time there was just the odd team who were just a little bit baffled by a gay football team and expected an easy game and were surprised when it wasn’t. As time goes on you build up a reputation and you build up a respect and that’s why we are where we are today.”

With the good work that the FA does throughout the rainbow laces campaign and the like, the game has changed massively. Football seems to be far more accepting than it was even half a decade ago.

But that’s not why these guys do it. Obviously the work they do off the pitch is quality, but the reality is, they play good football. They aren’t here solely as the ‘LGBT team’, they are here to win football matches.

“We pride ourselves on what we achieve on the pitch. I think with Stonewall FC obviously there’s the off-field stuff, but what we’re doing on a daily basis is challenging stereotypes for the people watching, to the people we play against. We are saying ‘you know what? Gay men play football and play just as well and exactly in the same way as heterosexual men’,” Eric said.

The game neared kick-off. Eric was watching the team warm-up as we sat in the small stand adjacent to the pitch and the intensity of the warm-up had gone up a level. Both teams looked fired up and to be totally honest, I was somewhat glad that I wasn’t about to go out onto the pitch. 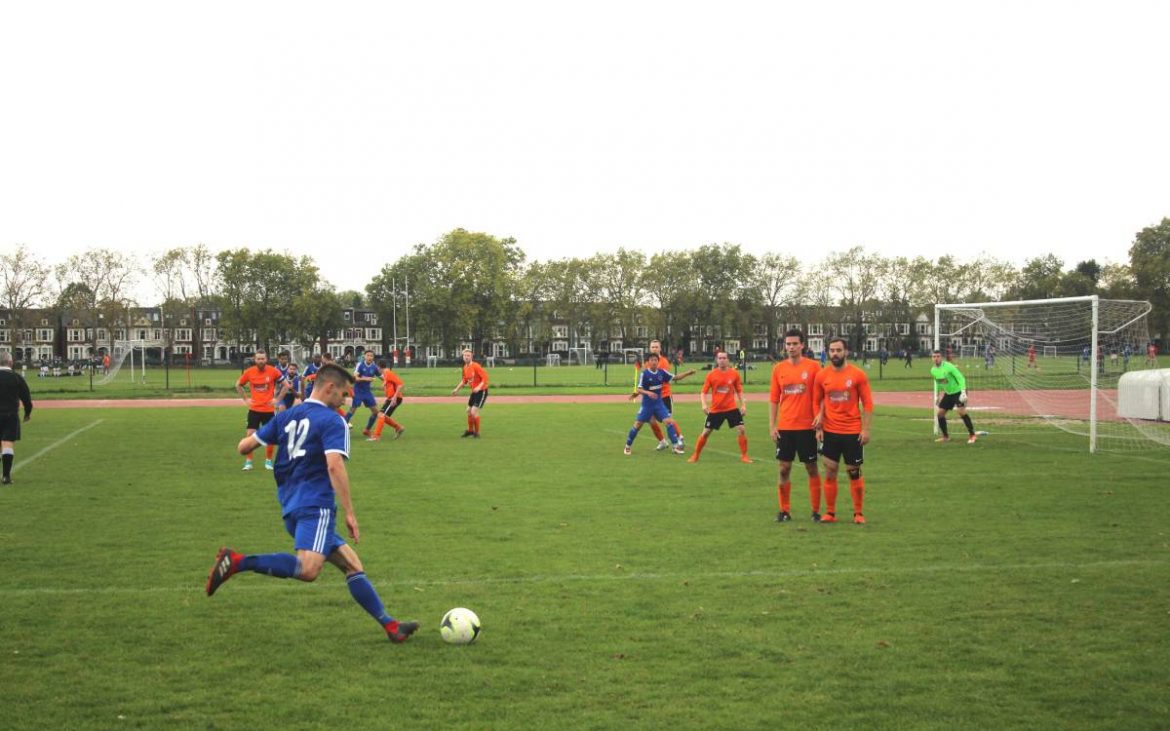 Football is a lot friendlier than it has been for a long time. But clubs like Stonewall are important. They challenge these negative ideas. I know that they don’t think of themselves as brave, but I do.

“The difference between us and other football clubs when you get out onto the white lines? There’s absolutely no difference. Once you’re out on a football pitch race, religion, background, whatever it is, it doesn’t matter,” Eric added.

The game kicked off and it was a good match. Stonewall took the lead early doors with a nice passing move, only to have Pitshanger equalise with a goal moments later. It was a fast and physical game and a good advert for non-league footy. I’m also glad my team won’t be playing theirs any time soon, they’d definitely win. “If you came to watch a Stonewall game and you turn up five minutes late, you’re not going to know who the gay team is and who is the heterosexual team because there’s nothing that sets us apart.” Eric was spot on.

After getting in touch with Stonewall, Titans FC, another LGBT club, got in touch and invited me down to one of their Wednesday night sessions. When I got there Terry, the club chairman, asked: “You bought your boots?” Not sure he knew I was here to talk about the club, and I hadn’t come expecting to play, but they welcomed me in to get involved. A chance missed to be totally honest. “We’ve got around 60-65 members. Some people just play five-a-side because that’s what they are comfortable with, but some prefer 11-a-side,” Terry explained.

“I’ve been here for twelve years now. The good thing about that is you make friends all over the country. I met Jim when I was playing for a team in Leicester, and he used to play for the Yorkshire team in Leeds. Over the years we’ve come down to London,” Terry continued.

You could tell these lot were close-knit and it was nice to see. “It’s a really good way for people to go, ‘well actually you know I identify as LGBT, I like football, this is actually a good way of socialising and having a community,’ most of my friends network is through the club.”

As the round-robin of games went on, Terry took to the field in a rainy west London and I managed to get to chat with Jim, who looks after the Titans’ social media. 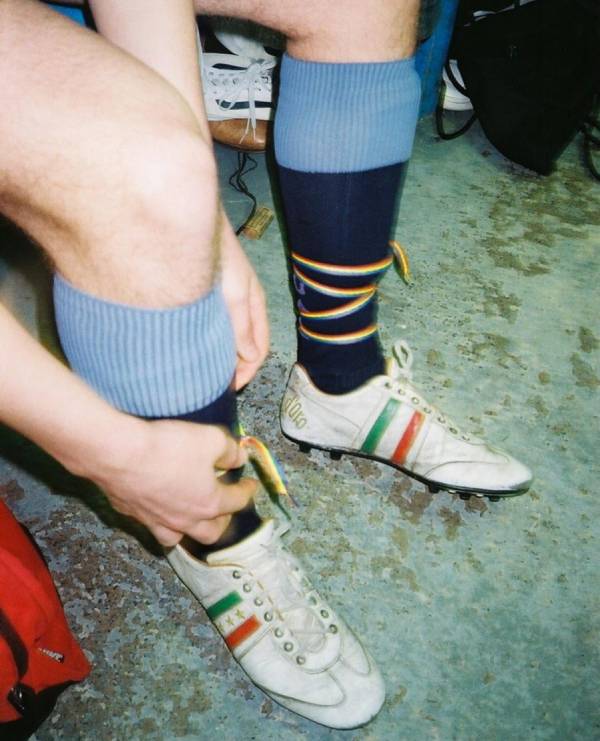 “The Rainbow laces campaign is important as it gets bigger and better every year and it’s just making people more aware. You’ll get the people that say ‘oh we don’t care,’ but having that sort of visibility is very important. Because if we didn’t have those visual and physical things then LGBT people wouldn’t know you could play LGBT football.” Jim said.

I was happy to see how much these guys appreciated the gestures the football community had made towards the rainbow laces campaign, to us it’s nothing, but in reality, it showed we’re all here to help whether at a mainstream club or within the LGBT clubs.

Jim continued: “If you just shove things down people’s throats then they are just not going to be receptive, but if it’s little by little. Yeah, we just have to keep doing what we’re doing.”

It’s all about making small changes but these guys are making a difference one game at a time. “I think at the grassroots level there is plenty being done, and I just think it will take one or two people to actually come out that will do so much more,” Jim said.

It’s great to see the LGBT football community thriving. A stereotypically masculine game that’s being rightly challenged by grassroots clubs like the Titans and Stonewall.

But there are also plenty of other supporter groups of big clubs out there providing safe spaces where people can feel welcome within football. So next time a centre back wearing rainbow laces tells me he’s gonna “kill me,” I’ll be happy.

Happy in the knowledge we’re spreading a positive message. Happy knowing that on those white lines we’re all equally unsafe.