Lauren MacDonald has just dropped out of university to become a full-time activist.

For some, tackling the climate crisis is not just about making little changes to their routine but big changes to their lives: “I went to one class [after the protest] and thought I couldn’t go back to my normal life after that. It’s such an emergency that I have to do everything I can.”

Lauren, from Glasgow, is just 20. She was studying a Masters in French and Spanish at university. But now wants to make a difference along with many others who have dropped everything to join Extinction Rebellion (XR). “I’m not the only one who has dropped out of uni for this, I’ve found lots of people who have made similar changes.”

We met at the October XR protests in London; this is not the first time they have caused disruption in the capital. Lauren tells me that she first went vegan about two years ago: “It felt like an awakening” she said.

Through social media and information available online Lauren educated herself in animal rights issues and researched how much the industrial use of animals contributes to the warming of the Earth.

Over the next year or so she started learning more and spreading the message to as many people as possible and, importantly, started interacting with other vegans and activists online.

Lauren tells me that  “even from a couple of years ago [she has] noticed a change in people’s attitudes,” with more of her friends making the change to cut out or reduce their animal products and overall greater awareness that people have of the facts surrounding the topic. 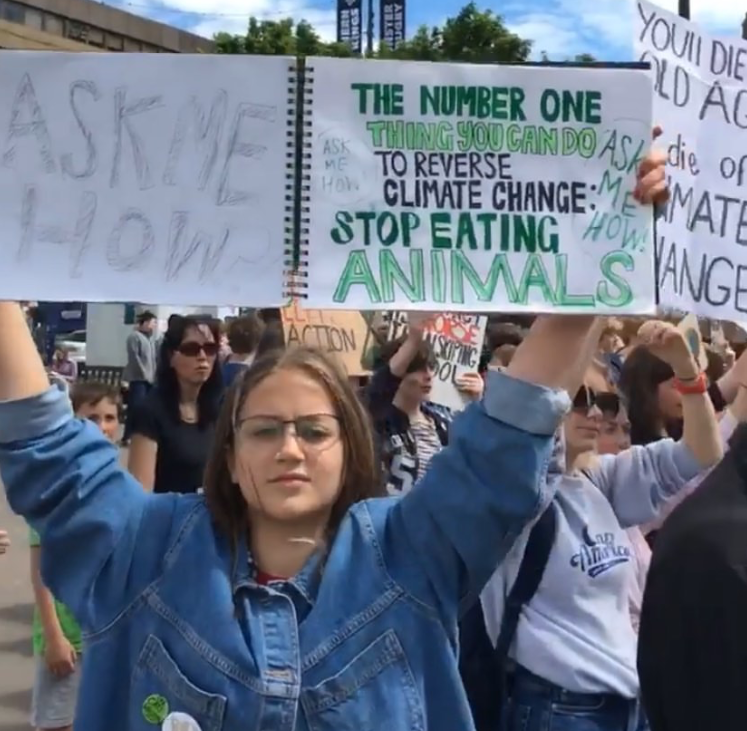 Lauren at the climate march in Glasgow, May 2019 [Instagram: @lauren.macdonlad]

It was with this newfound confidence Lauren went on her first climate march in May 2019, at the end they announced an open mic on the stage which she saw as her chance to speak up. From there she ended up talking with the Glasgow Youth Strike Team (of which she is now a part) who organised the march, and she was added to their WhatsApp group to help get involved with new action.

Later that day some of the members started asking in the chat who it was that gave the veganism speech and how they could find out more. “Even on the front lines of the climate crisis,” Lauren says, “there are people who still weren’t aware of the impact their food has on the planet.”

Extinction Rebellion was set up in 2018 and describe themselves as “an international movement that uses non-violent civil disobedience in an attempt to halt mass extinction and minimise the risk of social collapse.”

From the blockades in central London, they have taken action across numerous cities such as Brussels, New York, Paris, and Sydney to name a few. This is their third round of action in London, the others took place in November 2018 and April 2019.

The atmosphere at the protest in October is very uplifting, it feels like a small festival and with an appearance from critically acclaimed duo Orbital, it certainly sounds like one. There is, however, just like the overcast sky, a sense of fear and a lot of emotion hanging over Trafalgar Square. 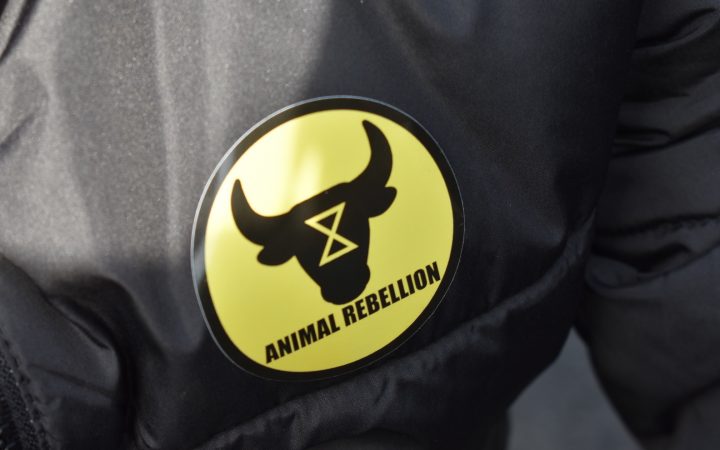 Back on the ground, Lauren tells me that through these new contacts made form the climate march she found out that a new group was being set up, Animal Rebellion (AR). “That was the biggest turning point for me, the biggest for my activism.” She tells me how this was a really exciting development because of the lack of animal awareness in XR, “It’s really important we have climate justice for all species.”

From there she ended up on the phone to one of the founders of AR who asked Lauren if she would like to be their regional co-ordinator for Scotland. From there she was invited down to London for the animal rights march in August, it was after this that Lauren set up AR Glasgow, “There’s about 40 of us in Glasgow and that just from being active for a month.”  There she organises meetings, talks and helps to bring together Scotland’s national response to any climate walks or protests.

Through her work, she has been able to meet many of those influencers and social media peoples that inspired her to get involved in the cause those two years ago. One of those was Earthling Ed who Lauren has met at numerous rallies and protests: “Every time I met him it reminds me how much he’s changed my life and made activism seems so accessible.” 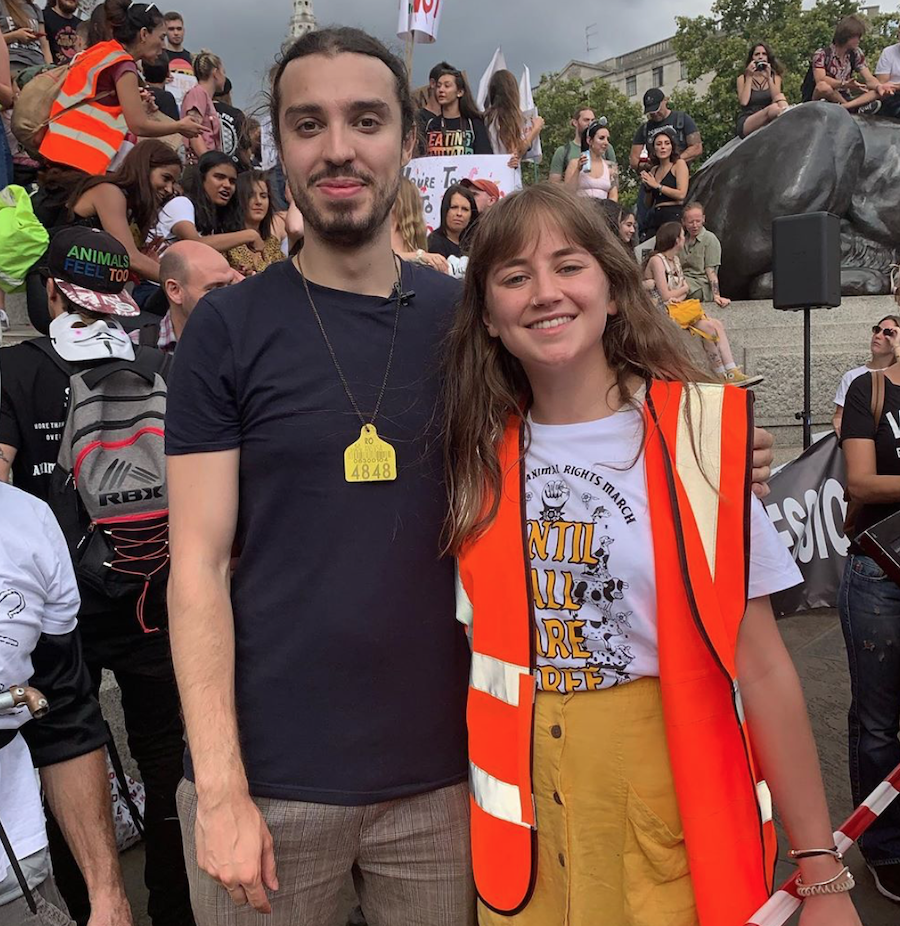 Lauren tells me that her time spent with AR and before has changed her outlook, “It has made me realise that they’re just people who want justice and I can do that too. Activism isn’t something that’s unreachable; anyone can do it by joining a march, protest or just spreading the word.”

And her advice to anyone wanting to get involved? “Come to a strike or a protest, meeting like-minded people is the best thing to do. Even if you don’t know anyone it’s a really welcoming environment.”

“For me, doing this, it’s a moral obligation. Sometimes it feels like the weight of the world is on my shoulders. We are really strong together and these are the people that remind me I’m not the only one fighting.”

More recently the protests have taken a much more heated turn. The Metropolitan Police issued a city-wide protest ban on October 14, this contradicting their original designation of Trafalgar Square as a demonstration area. Over the phone, I caught up with Lauren who tells me this sets a dangerous precedent for people’s right to protest:  “It’s making people scared to stand up for their rights and to join the protest.”

There was more contention on the Monday when a group of protesters dressed as various fruit and vegetables protested at Oxford Circus, this led to viral images of protestors dressed as broccoli and pod of peas getting cuffed and stuffed into a van. “It’s ridiculous,” Lauren says, “Having fun and trying to spread the message, how can you get arrested for being dressed as a pea?!”

Lauren has two years if she wants to resume her studies at Glasgow University. The question is will enough have been done in that time to stop the oceans rising and food running out?