The Scandinavian countries are largely known for one thing; being pricey. Travelling to most places in Europe is incredibly cheap (mostly with thanks to the bittersweet novelty that is Ryan Air) but whilst the flights may be cheap, we always hope for similar prices at our destination.

The climate in all Scandinavian countries is very similar to that of Eastern Europe, so why would you go to a more expensive place when you can go somewhere comparable for less?

The city of Oslo has high prices for one main reason: Scandinavian employees have higher incomes, meaning that production costs are higher. This stems from taxation being high, with VAT at 25% and personal income tax hitting the 55% mark. Although this may seem like a burden for those working in Oslo, most see it as a benefit as every resident is covered by the welfare system.

There is little inequality between classes in Norway, making society a friendly and happier place to be a part of as people feel safe and secure. This has led to Norway being ranked the third happiest country in the world in 2019 according to the World Happiness report.

An atmosphere of happiness resonates throughout every person, shop and street in Oslo, making it hard to feel down in this beaming city.

According to Talor, from Talormade Doughnuts (a must stop for breakfast and a coffee whilst staying in the city), “the happiness of locals comes from surrounding themselves with friends and food” and  “exploring the pretty architecture of the city with the suburbs not too far away.”

Oslo is one of the less-visited Nordic cities, it’s non-touristy element gives the city a laid back feeling, something that is hard to find in Europe and a quality that entices ‘off the beaten track’ travellers.

Oslo is graced with ever-changing seasons, making it desirable for every kind of holiday. In the winter, wake up in the city and by the afternoon, be on the mountain strapped into a pair of skis before ending the day in a sauna. For summer, swim in the fjords and hike the before snowy slopes, ready for a relaxing evening stroll through the city parks and a delicious dinner at an abundance of metropolitan restaurants.

A city blanketed in snow is always picture perfect. Speak to any Londoner or New Yorker and they’ll express hate for their cities in the snow as most of the time, it’s all slush, grit and ice. 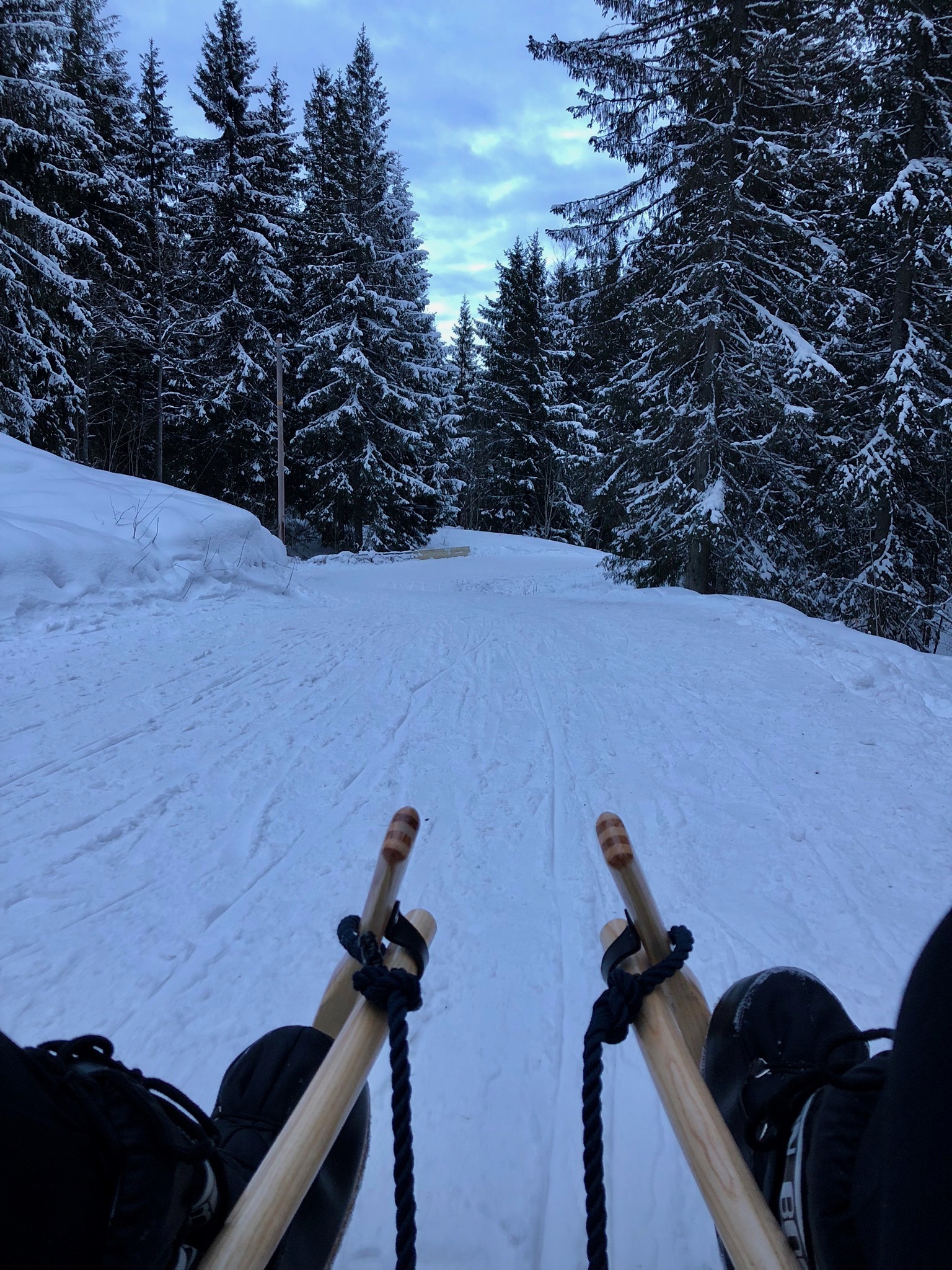 In Oslo, every day gets a fresh sprinkle, painting the city a pearly white throughout winter. The natural winter beauty of Oslo is breathtaking, but it comes at a price.

The city is so cold that a five-minute walk is only just bearable before having to dip into a cafe for a warming drink. This makes exploring the city extremely difficult, resulting in a bill of 300 Krone (£25) just for a brief dip of warmth.

The struggle to find boots that’ll keep your feet toasty but supported is a real challenge and similarly expensive, this is also a big added cost. Add a big coat and a couple more thick jumpers, that will lighten your wallet.

However, winter activities are cheap and cheerful. The fountains in the city freeze over, making them free to skate on for everyone; skates are available for hire for 120 Krone (£10) or for a more rustic option, head to the surrounding lakes in the forest suburbs which are picture-perfect just in time for Christmas.

You can head further out of the city, to the end of the metro line, to the neighbourhood of Frognerseteren, where sledges are available for hire next to an antique Viking chalet. Warm-up with a hot cup of cocoa before heading down the sledge run on vintage wooden sleds, costing around 100 Krone (£8.40) for the day. 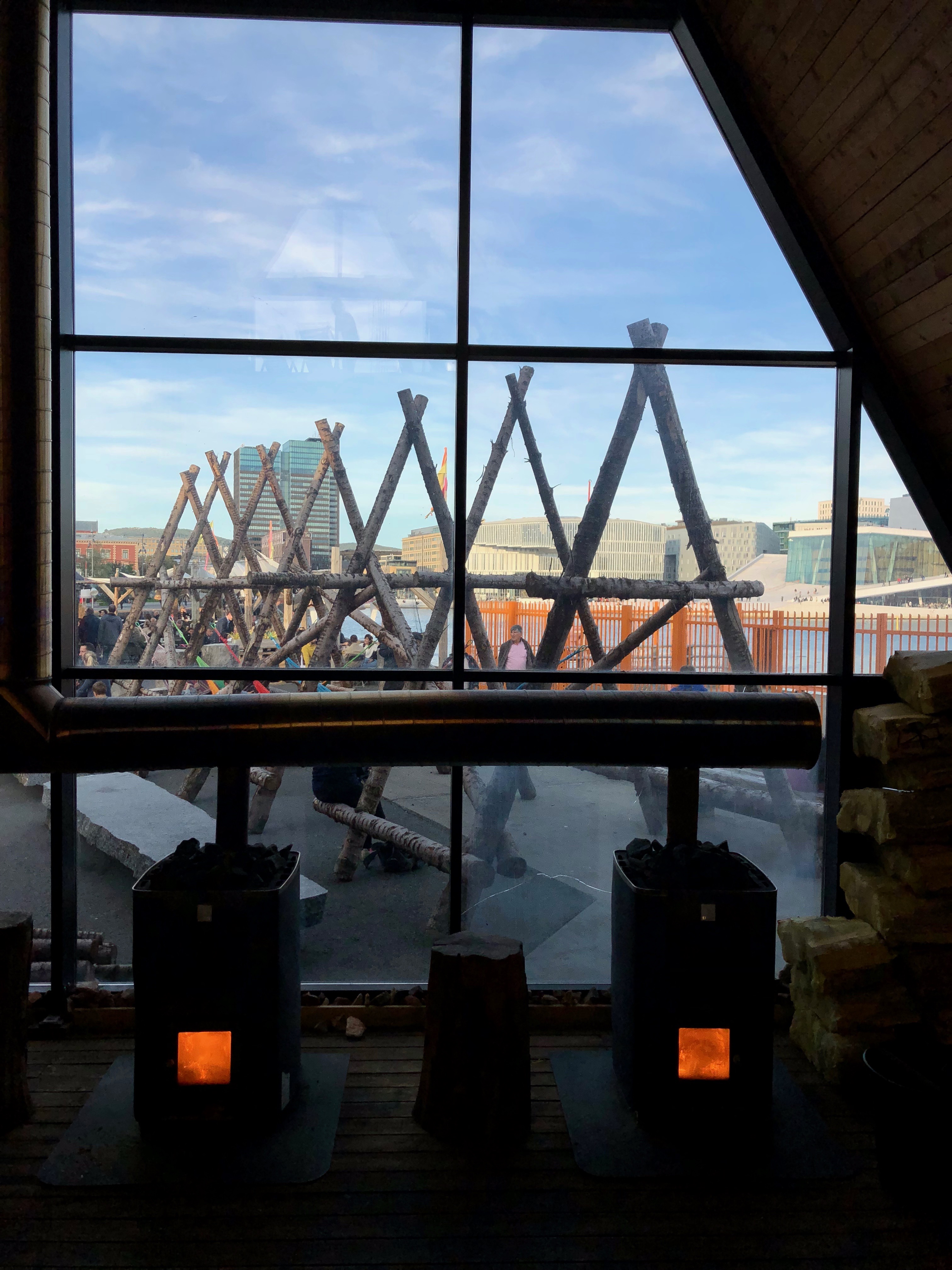 View of SALT from the sauna.

The most relaxing part of winter in Oslo is becoming immersed in the Nordic sauna culture. The sauna began in Finland but was quickly adopted in Norway as a way of relaxing on a cold day. The culture in Oslo has boomed with the introduction of floating saunas, which explore the fjord for the day, giving the ability to sit in the warmth and jump straight into the freezing cold water.

The largest sauna in the world, SALT, has taken a more nomadic approach by making the sauna culture one of community. Here, visitors can partake in cultural rituals, ice-cold baths, and even enjoy a nice beer in the sauna with other enthusiasts. At 150 Krone (£12.61) for a few hours, it’s the perfect way to stay warm in the chilly winter months.

With the warmth of summer comes the greenery of mother nature, which bursts throughout Norway. Temperatures don’t tend to hit above 20ºC so whilst this may not be the perfect place to relax and catch a tan, it’s a perfect place to walk and explore. The city itself is not all that big so walking is recommended and makes it easier to see more of the city sites. With the introduction of Lime Scooters, getting around the city has never been so easy.

Wander through the Vigeland Sculpture park to find more than 200 sculptures by Gustav Vigeland, or stroll along the fjord front to look out over the distant islands. Walk to the top of the Opera House to look out over the colourful city, or discover an abundance of Nordic knits in downtown vintage stores. The city in summer enables tourists to get the best out of the city just by walking, which is always free. 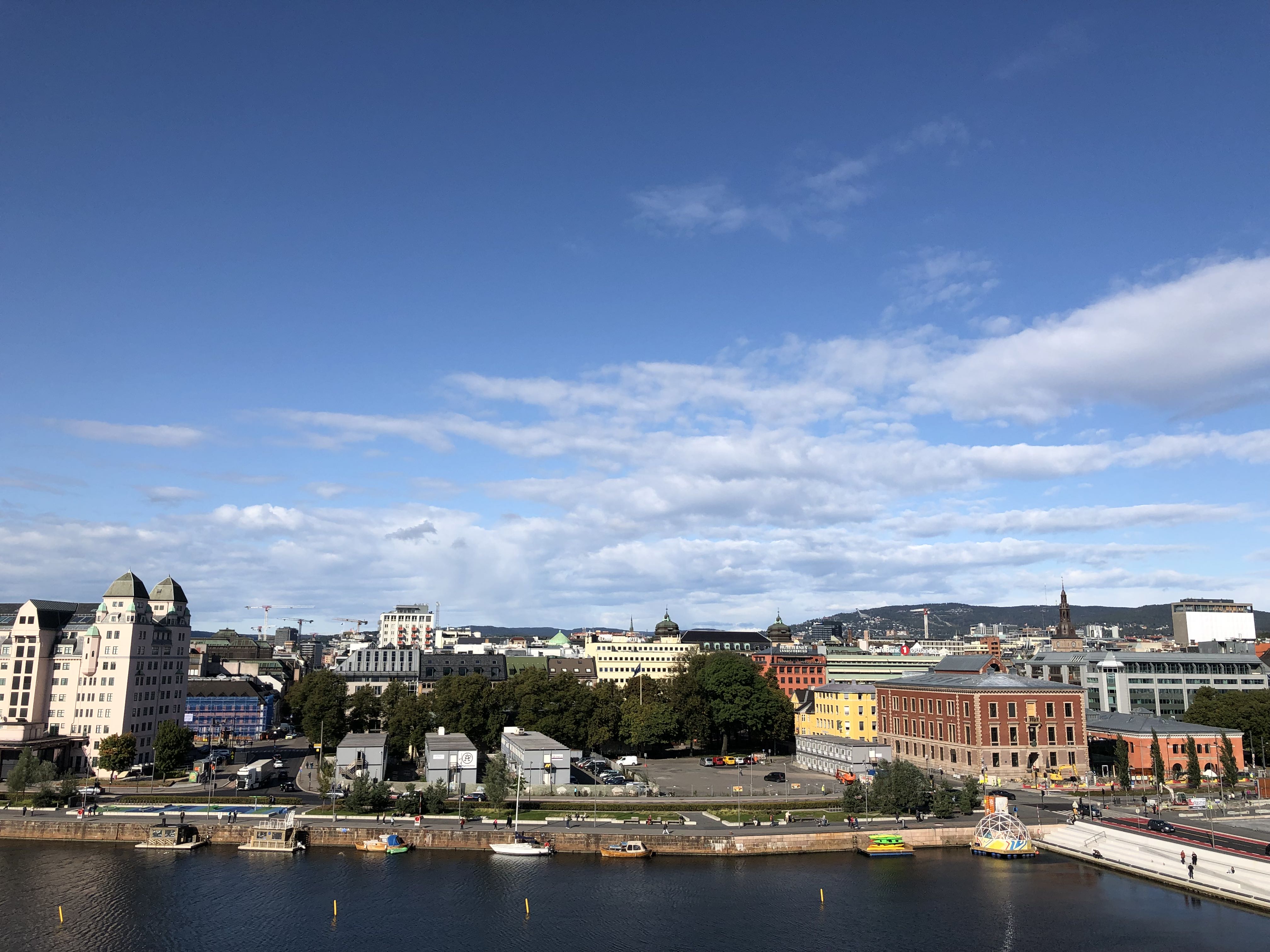 View of Oslo from the top of the Opera House.

Oslo Fjord is beautiful to explore in the summer season, with boat trips leaving from the central harbour every 15 minutes. These trips cost around 70 Krone (£5.88) for a return ticket and being out on the open water gives a stunning view of the city, contrasting with its suburban islands. These islands are mostly residential so there is not much to see or do, but the boat trip is worth taking just to be out on the open water. 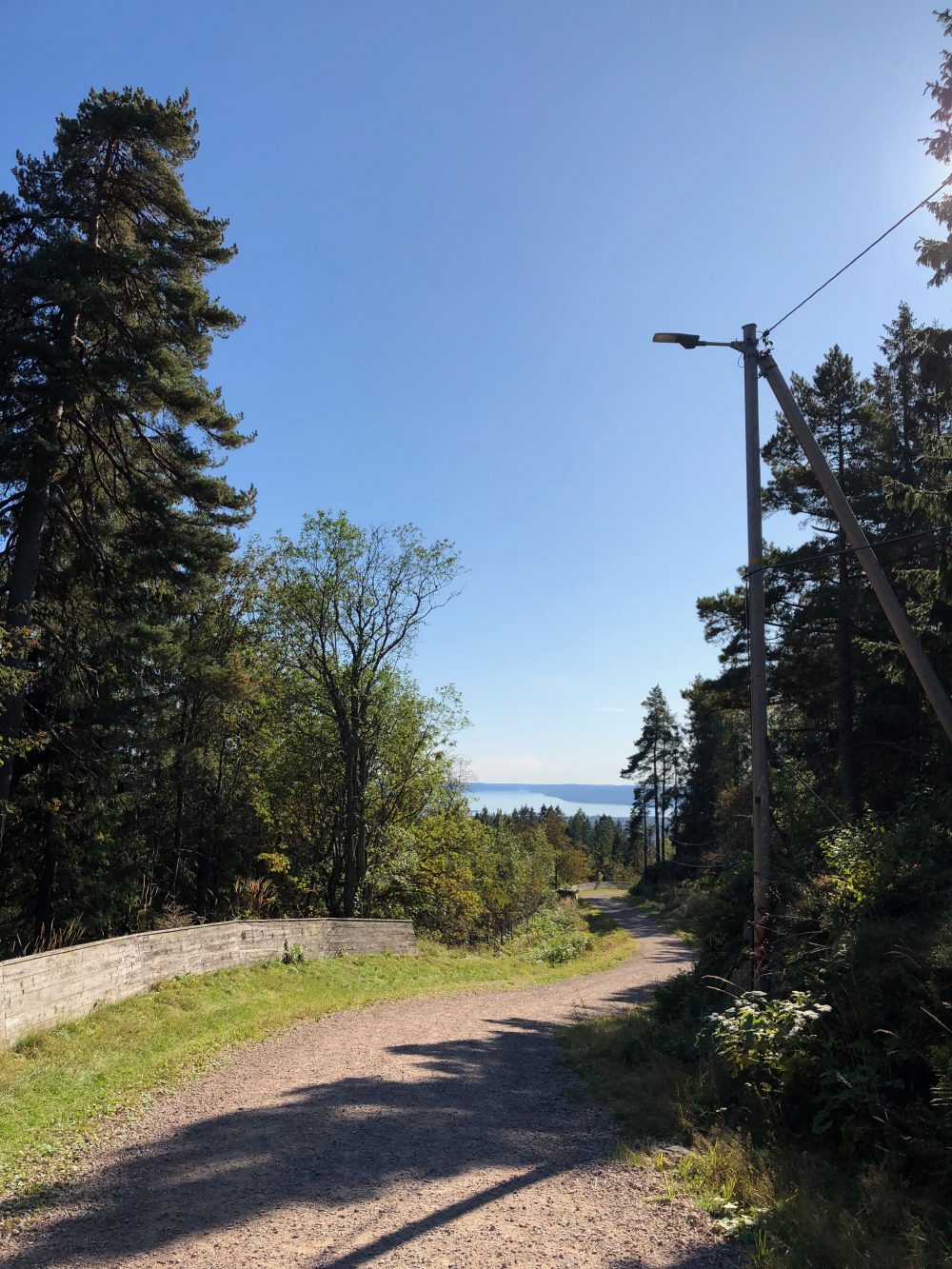 View of Oslo from Frognersetern.

It is also worth taking the metro up to Frognerseteren again. The chalet is still open for business and has a dining terrace looking out of the city. The food is pricey due to the location and view but is worth tucking into. Then retrace the sledge run in the sunshine, winding down a woodland path alongside a running stream. About 2.2km down the walk, hop back onto the metro at Midtstuen and ride back to the city centre.

For foodies, Oslo is the place to visit come winter or summer. With multiple indoor food markets like Vippa, Mathallen and Oslo Street Food, there are almost too many options. All of the food vendors in these markets are similarly priced to fast food restaurants in the UK and the atmosphere and delicacies combined lead to a far more enjoyable experience.

Eating out in Oslo is uncommon for residents and this is where the expense comes from. An average main meal costs at least 150 Krone (£12.61) and to have a beer in any restaurant will knock you back around 70 Krone (£5.88), not much more than in London but certainly more than other cities in the UK. Food markets are definitely the places to eat on the cheap, but two firm favourites for fine dining are FYR Bistronomi and Girotondo.

Oslo is a year-round city to visit, so it could be said that there is no “best time” to visit this wonderful place. But, if wanting to indulge fully in the city while keeping to a budget, summer is the season to go.

The trick to Oslo? To spend the week or week-end as a local would. Explore, indulge and enjoy.

All images by Georgia Boyle

By Sophie Patrick
6 Mins read
An in-depth look at the 117th National Western Stock Show in Denver, Colorado, and at what makes this once-a-year event so special.
Travel

By Margit Potsepp
10 Mins read
We give you a first-timer’s guide to a travel destination that should definitely be on your bucket list – Tallinn, Estonia.
Lifestyle

By Tatenda Kavendekete
6 Mins read
We look at the growing social media trend of getting your teeth done in Turkey and why the procedure may not be the best remedy for you.