With a population of 18 million, Cairo is one of the largest cities in the Middle East and Africa, but it has no city-wide waste disposal system.

What they do have is an army of people known as the Zabbaleens located in Mokattam, Manshiet Nasser. This is the largest garbage village in Cairo, Mokattam is a Coptic Christian area where the Zabbaleens saw trash as an economic opportunity.

For generations, the residents of Cairo have depended on the Zabbaleens (literally meaning garbage collectors in Arabic: الزبالين) to pick up their trash. More than 60,000 people living in Garbage Cities earn a living from recycling materials that they collect.

They go to the city and pick up garbage from the street and from households and then bring it back to Manshiet Nasser, where they divide plastic, metal cans, clothes, materials and clean it so they can sell it to recycling companies both in Egypt and to other factories in the world.

Men and boys go to collect the trash and women, girls and the young boys stay at home to sort it. Every family has their own type of business and specialises in a type of material; for example, plastic bottles.

[pullquote align=”right”]Their only focus was how to make money[/pullquote]“I grew up in Mokattam and went to school there when I was six years old but I had to leave school after two years to help my family financially,” said Adham El Sharkawy who is now 32 years old.

He later changed his business to drinks cans. He collected mainly Coca Cola cans and removed the top of the can from the bottom: “By that time the body of the Coca Cola can was metal and the head was aluminium and to be able to recycle them I had to separate the two materials,” he explained. Elsewhere in the world, this process is done by machines, but in Egypt it is labour-intensive work.

Manshiet Nasser village has collected garbage for decades, starting back in 1910 where a group of Muslims from the Dahkla area, known as Wahiya people, relocated to Cairo and started collecting garbage from households for a small fee.

In 1970 the Zabbaleens, who at the time were farmers and landless peasants, migrated to Giza where they were given a four-day eviction notice from the governor of Giza and subsequently moved to the abandoned quarry at the foot of Mokattam Hills.

Although the government of Cairo accepted the Zabbaleens living there, they never issued a lease or legal tenure, so they initially lived in makeshift settlements of tin huts and homes built from other things they could find among the trash.

Only after the establishment of the Saint Simon cave church in 1975 did the Zabbaleens feel more secure in the area and began to build permanent houses. 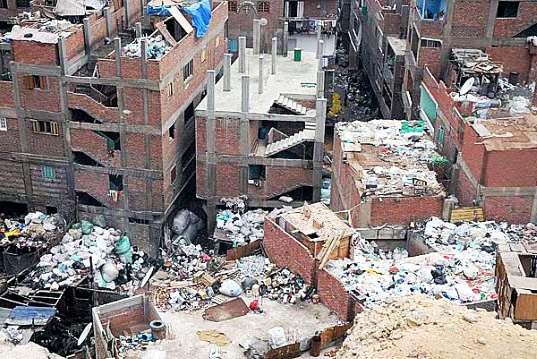 Permanent buildings are now springing up in Garbage City [YouTube:Kortfilm]

In 1989 there was an agreement between Wahiya and Zabbaleen, as the Zabbaleens needed the organic waste for their pigs and started collecting garbage themselves on their donkey carts.

Despite the fact that the Zabbaleen community has created one of the most efficient recycling systems in the world, where they recycle up to 85% of the waste, their Christian beliefs still separate them from the predominant Muslim majority of Egypt. In 2003, the Egyptian government sold annual contracts to international companies to collect and deal with Cairo’s waste.

There were three companies, two from Spain and one from Italy. This takeover was a massive threat to the Zabbaleen community’s socio-economic sustainability. In 2009 they faced a further threat when the Egyptian Agriculture Ministry ordered the culling of all pigs because of the possible spread of influenza H1N1a virus – pigs are essential to their recycling system as they eat all the organic waste.

“We are really good at what we are doing. We have recycled for so long, generation after generation; my father taught me and his father taught him. The international recycling companies only recycle 20% of the waste where we recycle at least 80% of the trash we pick up. All their leftovers are being dumped somewhere in the desert,” explained Adham.

In 2009 the documentary Garbage Dreams showed how much of the trash picked up by the international companies was just being driven to the desert where they dumped it instead of recycle it.

The Spirit of Youth Association (SOY) was founded in 2004 in Manshiyat Nasser, and they work closely with the residents of the Zabbaleen.

“The youth growing up in the Zabbaleen need education and learning opportunities. Especially after the appearance of the international trash companies, we need to help educate the youth of the Zabbaleen in relation to sustainable entrepreneurial recycling businesses,” said Malek Danial, executive director for SOY. “We educate through projects that are funded to give those people hope for the future.” 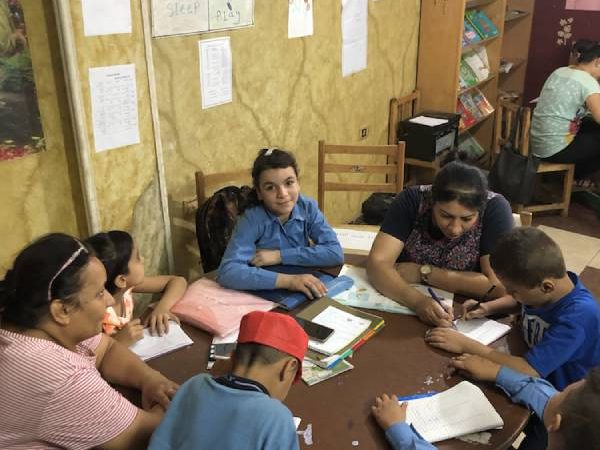 The NGO received various funding grants for different projects over the years including support from Unicef, the Bill Gates Foundation, UNESCO, Hands on the Nile Foundation and the African Star Foundation.

“I accidentally came across SOY when I was about 12 years old,” said Adham. “At SOY Learning School, I was taught Arabic, Drama and we also had instructions about health when working in garbage. My dad didn’t want me to join but I had this dream to go abroad and study so I went to the lessons and he accepted that in the end.”

Adham finished his learning at school and got a certificate; at the same time a documentary filmmaker was filming the documentary Garbage Dreams, and Adham was one of the main characters.

After making the film, he was nominated to go to Wales for a 14 days exchange to learn about recycling abroad. Adham later took off to America where he studied English and following this, he moved back to Manshiyat Nasser.

“In 2007 SOY hired me as an Arabic teacher for the younger generations and I worked for them for a few years. I stopped working with the kids because my passion was way above their interest in the recycling business. Their only focus was how to make money.”

Adham decided to start up his own business as a Freelance Coordinator and Translator. He tells me that he still has dreams about going abroad to study either English or Technology. And whilst he is still currently working with SOY, this is no longer his only endeavour.

Many children in Manshiyat Nasser work with their parents from the age of four or five years old and do not have the same dream as Adham because there is a lack of belief in education.

They learn the family business to survive and earn a living but dreaming of leaving the Garbage City is rare because they cannot comprehend life outside of the area where they grew up.

However, there is a strong belief within the Zabbaleen community that Cairo needs them. They have collected and recycled for so long and educated each other how to do it in the most efficient way

“I believe that the focus on recycle your garbage or bring it to a recycling place, buying things that are made from recycled material and so on is a growing interest globally,” Malek Danial said.

“Hence why the Garbage City will still be recycling many more years ahead and I don’t see how anyone should be able to takeover recycling in a city like Cairo.”