30 years ago, on November 9, 1989, the Berlin Wall came down after three decades of separation.

The division that was once imposed on the country by the wall that dissected East and West Berlin for 28 years, is still felt within the country today. The anniversary has been a time for the country to reflect, remember and celebrate.

The wall was built in 1961, splitting the sectors occupied by the United States, United Kingdom and France (West) and the Communist Soviets (East).

After an impromptu wall, made from barbed wire and concrete blocks, was built overnight on August 14, 1961, conditions in the GDR began to get worse.

East Germans were not allowed to travel, had access only to state-run media and were closely watched by the GDR state security, the ‘Stasi’, which was spying on all its citizens – they had no political or physical freedom.

For 28 years the Berlin Wall separated families, ruined lives and took them, including those of the 140 people who died trying to cross into the West.

“The wall destroyed by many families, including my own,” says Karola Stumpf. Now 60, she spent her childhood and early adulthood living in the shadow of the wall.

Although she lived in the West, a large part of her family were confined in the East. Stumpf’s mother was born in East Germany, but after meeting her father she moved to the West before the wall was set in place.

Stumpf’s mother was the only family member living in the West – she did not know when she was ever going to see her family again. 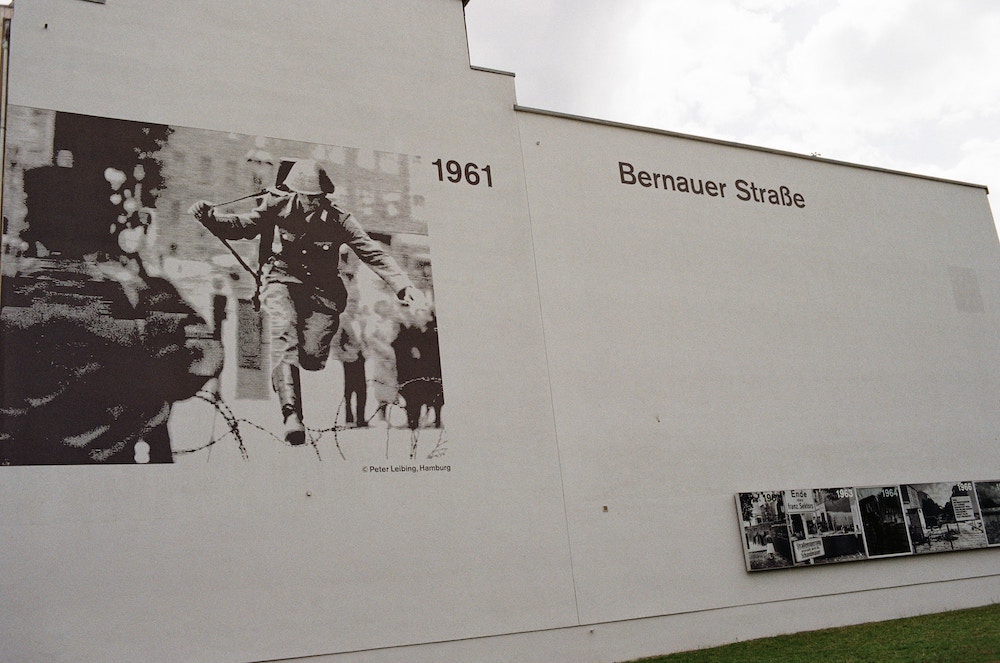 An iconic photograph printed on the side of an apartment block on Bernauer Straße captures the moment border guard Conrad Schumann escaped from West Berlin to West Germany by jumping over the barbed wire fence [Unsplash: Markus Spiske]

Her uncles, cousins and grandmother all lived in the East, specifically on Kremmener Straße, parallel to the infamous Bernauer Straße, which was, again, directly parallel to the wall. When the houses on Bernauer Straße were demolished because the GDR feared people were jumping out of their windows to cross the border, the apartments in Kremmener Straße were now directly overlooking the 3.6 metre (12 feet) high wall.

“When we were lucky, they could open their windows. When we weren’t, the border soldiers demanded them to shut their blinds and our meeting was over.”

Following the ‘Passierscheinabkommen’ (Permit Agreement) 28 months after the closing of the border, West Germans were allowed to travel to the East over a short period during Christmas – the first time any contact was possible since the wall had been built.

In the following three years, the permit agreement’s regulations fluctuated and allowed more visits into the East, under strict observation.

“My grandmother moved a few houses down so that the border guards could no longer watch her through the windows. We then started celebrating Christmas there once in a year, my whole family crammed into her tiny one-bedroom apartment,” Stumpf remembers.

Several years later, at age 12, Stumpf and her mother had the opportunity to visit her grandmother in hospital. “I was wearing tight pants with a zipper on the side. Beneath I was hiding medication wrapped in the silver foil of a chocolate wrapper. When we were stopped at the border crossing, the guard became suspicious of our intentions to enter the East. So a soldier carrying a machine gun escorted us to my grandmother’s bedside. Luckily, I could secretly pass the medication onto my grandmother in private,” she recalls.

Another vivid memory Stumpf has is of travelling to the East when she was 14 and spending the night at a disco: “I was wearing a suede jacket with tassels and sheepskin. Immediately, I was surrounded by people touching my jacket saying ‘You’re from the West!’ and asking me if I had chewing gum.” 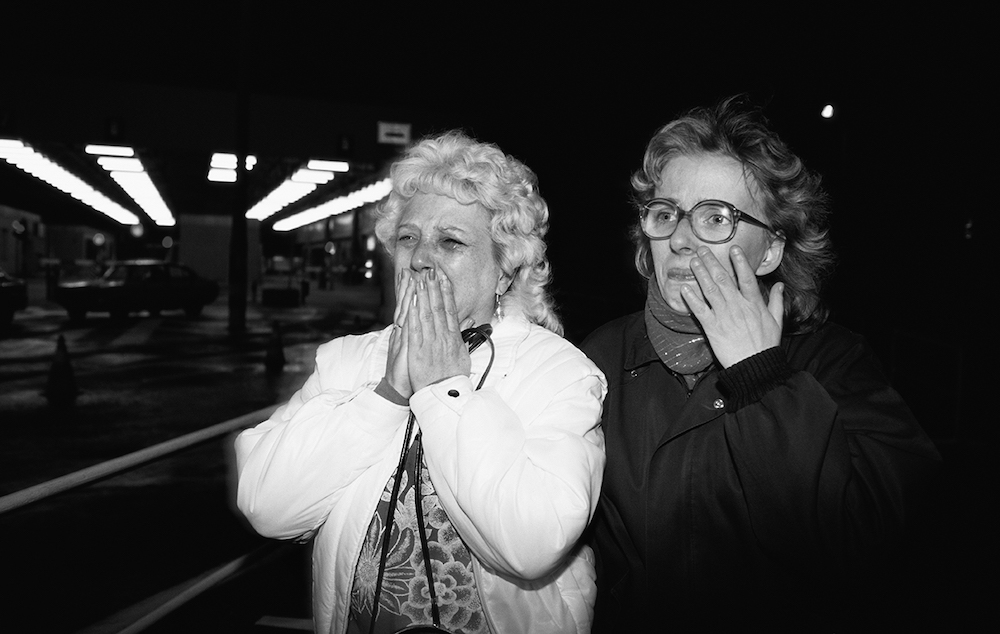 Two women are overcome by joy when crossing the East Berlin border at Checkpoint Charlie on the night of November 9, 1989 [Tom Stoddart]

The aspiration to leave the East was growing drastically. Protests had been taking place for years, but the ‘Montagsdemonstrationen’ (Monday protests) that started days before the collapse became especially significant – they were led with the slogan “we are the people,” and were aimed at fighting for political reform.

People from both the West and East (who were watching the channels illegally) took this as a declaration that the wall was open and demanded to cross.

By the end of the evening, people were stood on top of the wall with champagne, taking sledgehammers to the wall and driving across the borders as the guards stood aside. It was a moment of peace that everyone felt and with reason, this became the ‘Peaceful Revolution’ written in Germany’s history.

When the Wall fell in 1989, it was a triumph for the people and ultimately it was individual courage that manifested itself against the government.

“When the wall fell we did nothing, we were overrun by our family from the East,” Stumpf explains. “The next morning I went to work,” she continues.

At the time Stumpf was working at a bank, responsible for handing out the ‘welcome money’ given to East Germans moving to the West. “I remember my boss at the time giving the first man in line 100 Deutschemarks (€51, £43) and told him to go buy hot drinks and cake for everyone waiting.”

For East Germans, the period following the fall was a time for new experiences. Author Heike Geissler, who was born in the GDR in 1977, told The Guardian: “I was embarrassed about going into shops in West Germany and being a grey and dark-blue complex of drab timidity amidst all the colours. With my first western money I bought myself a neon-coloured rucksack and a cassette recorder. I ate yoghurt for the first time and liked it, and I draped myself in colours.” 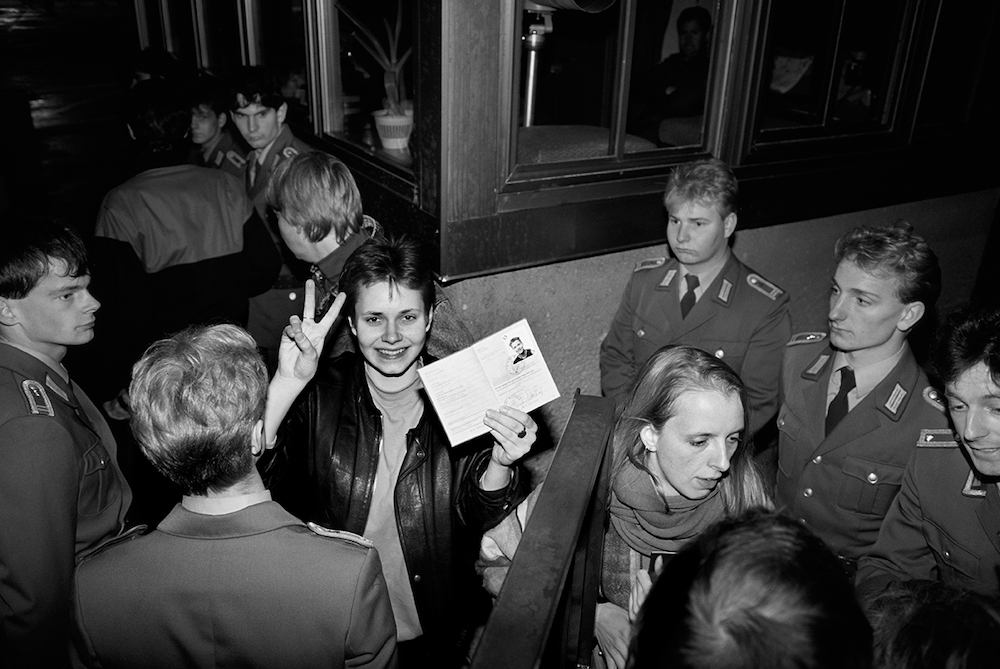 Crowds celebrate their freedom at Checkpoint Charlie on the night of November 9, 1989 [Tom Stoddart]

After years of physical separation, the wall left its mark on the space between Stumpf and her family. “Before the wall came down, meeting our family was so important. As soon as the wall came down, it got less and less important. The East Germans in my family stayed in their neighbourhoods and eventually we all drifted apart.”

This is not an uncommon phenomenon in Germany. Whilst the reunification, a year after the fall of the Wall, had an extremely enlivening effect on generations to come, many still feel the separation between East and West.

Although the difference has greatly decreased, income levels remain higher for West Germans. Statistics by Frauke Suhr show, that whilst the average monthly wage for a West German is €3,340 (£2,860), East Germans only make €2,790 (£2,389).

On top of this only 1.7 % of the top professional positions in politics, administration, economics, science, culture and in the military, are occupied by East Germans.

Germany’s political landscape is another clear reflection of this division, where right-wing politicians are consistently gaining more popularity.

Recent polls in the district of Thuringia, a rural former East German state, showed the AfD, Germany’s right-wing ‘Alternative Germany’ party, rise by 12.8% since 2014, making them the second-largest party there. 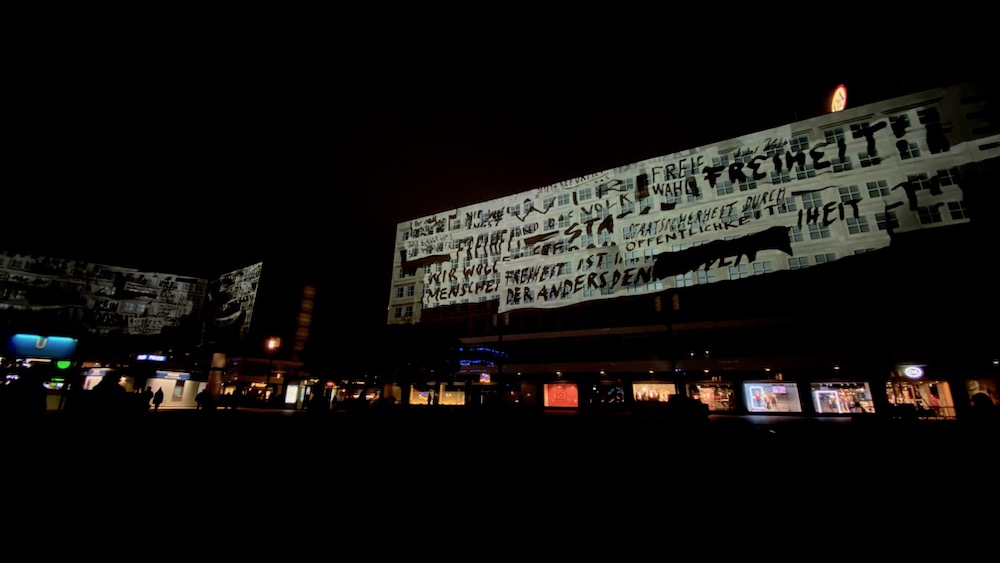 Half a million people gathered at Alexanderplatz several days before the Berlin Wall fell, making it one of many places significant to the Peaceful Revolution [Franziska Eberlein]

The aftermath of the far-right riots in the eastern city of Chemnitz in 2018 further reinforced the image that the East remains radically right-wing.

“This is often attributed to the anti-leftist world-views after the wall fell and the economic downturn in East,” an article in the Washington Post stated. After the Wall fell the East was neglected, over 800,000 people left for a better life in the West, leaving the people who remained, somewhat deserted in what had been their home for the last three decades.

Although politics are changing, Chancellor Angela Merkel remains certain that: “The values on which Europe is founded; freedom, democracy, equality, rule of law, human rights, they are anything but self-evident and they have to be revitalised and defended time and time again.

“No wall that keeps people out and restricts freedom is so high, that it cannot be broken down,” she added, during her speech at the Berliner Kapelle on the occasion of the anniversary.

Thirty years on, installations and events in and around Berlin were aimed at remembering and celebrating the fall of the Berlin Wall, whilst encouraging people to learn and reflect on the society today. With 200 events scattered all around the city, it was a memorable celebration not just for Berliners, but people from all around the world. 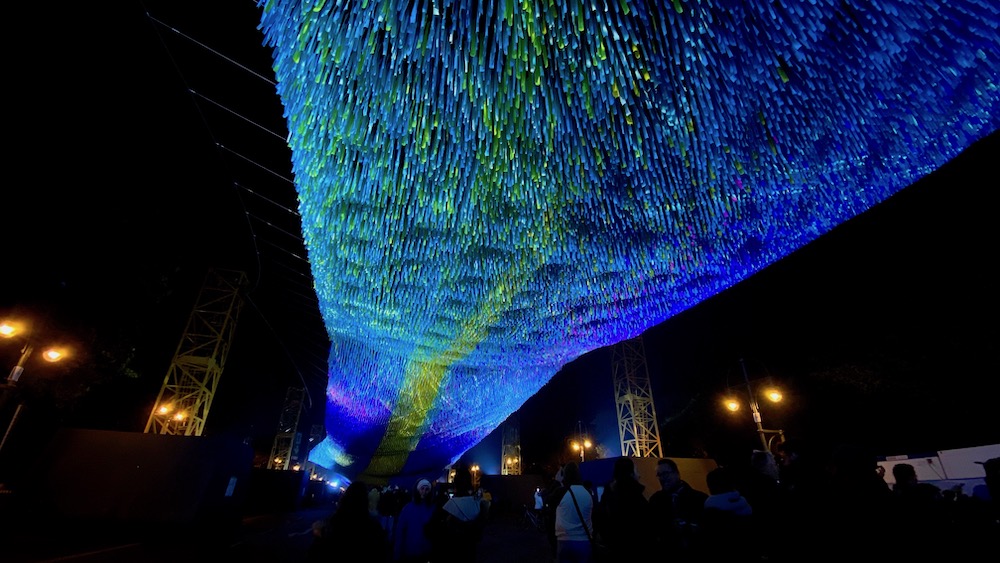 Alexanderplatz, became the canvas for 3D light projections – a 15 minute dive into the events leading up to and on the night of, the fall of the Berlin Wall, including moments like the Shabowski press conference. On November 4, 1989, Alexanderplatz became the most one of the most significant places in the history of the Peaceful Revolution.

The biggest protest in the history of the GDR took place here, with half a million people calling for a better state of society. Standing here, being reminded of the magnitude of the Peaceful Revolution, makes one reflect on how much the country has changed and how important unity is.

The Visions in Motion installation at Brandenburg Gate showcases exactly how desired a unified and better future for everyone is. More than 30,000 individually written messages, on hope for the country and the world, formed the ‘sky-net’ created by artist Patrick Shearn.

It seems that for many, the Berlin Wall is a representation of unwanted segregation and for that reason, resonates with people from all around the world, especially in today’s disunited political landscape.