“We have removed as much plastic packaging as we can without affecting the quality of fruit and veg. And we’re continuing to work on how to remove more.”

So reads the statement on one of the fresh produce plinths at a Waitrose in Oxford and is one of the numerous signposts scattered throughout the store advertising a plastic-free approach to shopping.

In June this year, a Waitrose & Partners store on Botley Road was the first of the chain’s 344 outlets to trial an alternative way of shopping called Unpacked.

In recent months, all the supermarket giants have been put under increased scrutiny for their unnecessary use of plastic, such as fresh produce items packaged on plastic trays and sealed in crinkly single-use plastic bags.

Unpacked aims to break free from something we have all become accustomed to. The scheme, with the aim to save thousands of tonnes of unnecessary plastic packaging, gives a greater availability of loose, fresh fruit and veg in attractive displays.

It also provides customers with the chance to bring and fill their own containers with dry goods such as coffee, pasta and other grains, as well as beer, wine and household detergents. Many of these refillable items are 15% cheaper than their packaged equivalents. 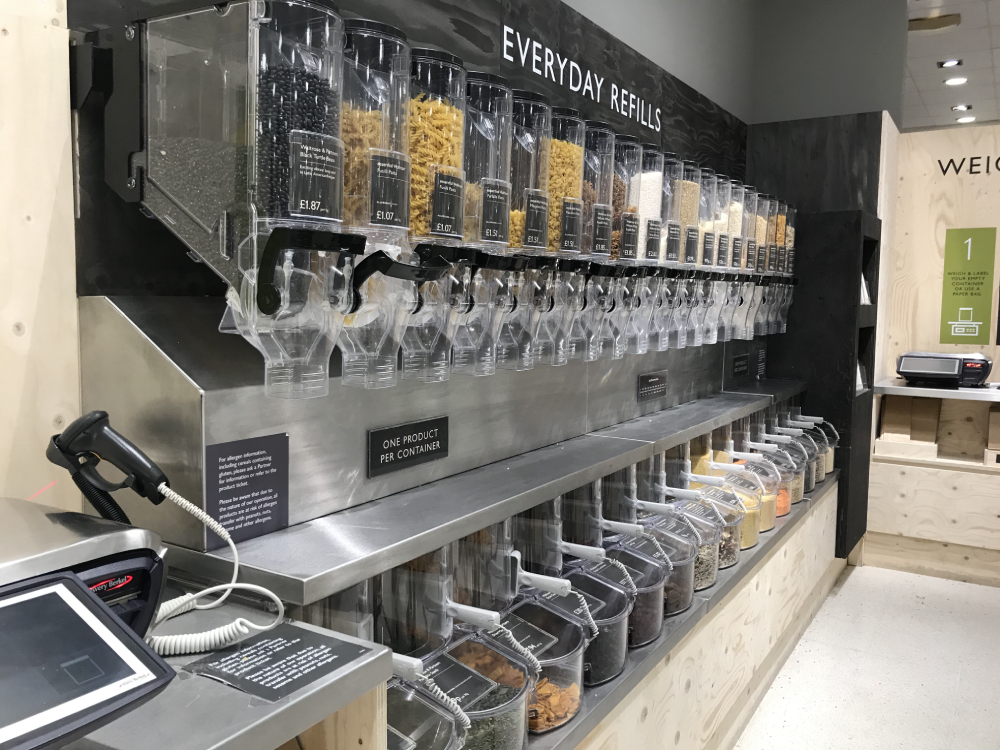 As the 11-week trial was received positively by shoppers, it has remained, and Waitrose has expanded this initiative to three other stores: Cheltenham, Abingdon, and Wallingford.

The Oxford Waitrose store is not the first outlet to operate a plastic-free approach to shopping. Traditional grocers, farm shops and zero-waste stores have become particularly popular and more readily available, albeit typically charging a premium. It is a model that gets a vote of approval from most consumers.

Various supermarkets have expressed they are committed to reducing the amount of plastic they use, as well as implementing more reusable and returnable alternatives. Reusable produce bags, bringing your own containers to fresh food counters and removing plastic sleeves from flower bouquets are some of the small steps taken by Sainsbury’s, who say they want to halve plastic packaging by 2025.

Similarly, Tesco state that they aim to “remove one billion of pieces of plastic from products by the end of 2020.” While it is evident that supermarkets have a strong desire to act on plastic, none of these pledges are legally binding.

Sam Chetan-Welsh, political campaigner for Greenpeace UK’s ocean plastics campaign, says that whilst supermarkets do need to do more, government legislation needs to be implemented: “Companies are going to start setting targets but it is fundamentally down to government to ensure that firstly, there are minimum standards and secondly, to push ambition much further and to overhaul the packaging system.”

Getting our supermarkets to an ideally plastic-free and recyclable alternatives utopia-like state would be an intricate and lengthy process. There are definitely more steps that could be taken by supermarkets and these would likely occur if legislation was used to greater effect.

In most stores, milk is still typically sold in single-use, plastic containers, but there seems to be not appetite for supermarkets to find alternatives such as glass with returnable schemes. “The UK has a really remarkably small amount of dairy suppliers, but all of them have made the decision to package milk in a single-use plastic bottle,” Sam tells us. 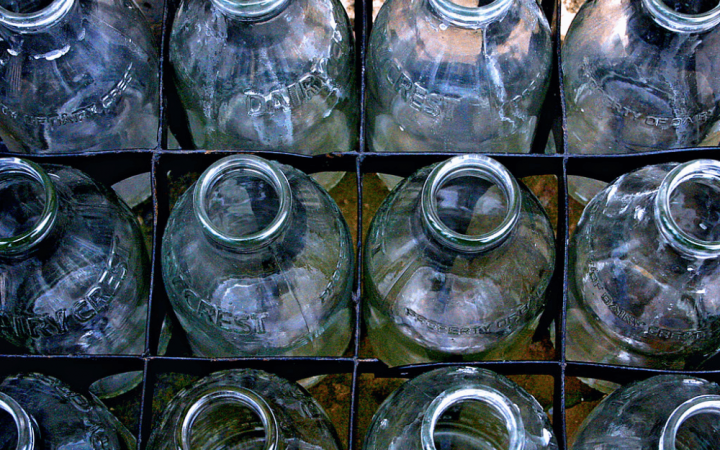 The sight of the traditional doorstep pint outside British homes within recent years has dwindled [Flickr:Karen]

“If all the supermarkets got together and told the dairy suppliers, ‘we don’t want to use single-use plastic bottles anymore’, then they could do it. They don’t because they don’t all want to move as one. That’s because it’s very difficult to get them to do that without legislation.”

The proposal, which can be described as a ‘reverse vending machine’, would introduce a levy such as 10p, on drinks sold in all types of containers: plastic, metal and glass. The levy acts as a deposit, which is returned to the consumer if they were return their drink bottle to a deposit station location such as a shop or restaurant. This provides an overall incentive for consumers to recycle.

Gove’s stance was criticised because it was unclear whether he would back an all-inclusive DRS scheme, one which would have the widest possible impact or instead back a “watered-down” and “on-the-go scheme.” It was feared the latter would happen after interference such as corporate lobbying.

Sam believes a watered-down scheme “would unnecessarily restrict billions of plastic bottles every single year from being part of the scheme. People don’t just buy 500ml bottles, they buy two litre drink bottles too, so to just unnecessarily exclude those is just absolutely mad to us.”

The UK Government’s latest Environment Bill was released this October. Whilst it positively included a DRS scheme, there is still strong scepticism among Greenpeace campaigners who argue there is still no clarity over how the scheme will be implemented: “Theresa Villiers, the current environment secretary, has not been specific on her position about those two things [all-inclusive DRS scheme or a watered-down version],” Sam said.

“The government have said they are going to do another technical consultation in February. But really in our mind, particularly since Scotland has already confirmed they are going to do a much more ambitious version of the return scheme, it seems crazy to have an unnecessarily less ambitious scheme here in the UK. Organisations like ours are still advocating for government to do it properly.”

It is evident that through more robust government legislation, issues such as plastic pollution can be tackled further. The introduction of the 5p plastic bag charge back in 2015, requiring all large retailers to charge 5p for all single-use plastic carrier bags, indicates this.

According to Defra: “the average person in England now buys just 10 bags a year,” compared with: “140 bags bought in 2014 before the charge was introduced.”

The DRS scheme is one piece of legislation that, if put into practice fully, would be able to turn the tide regarding the issue with plastic water bottles, a large offender of single-use plastic. A recent report by the House of Commons Environmental Audit Committee details how within a 15-year-period, the consumption of plastic bottled water has doubled, putting unnecessary strain on an already outstretched recycling regime.

It is symbolic of a throwaway culture that we have all become so accustomed to: “Water bottles now make up around half of all plastic bottles. To reduce the 7.7 billion plastic water bottles used each year in the UK, a culture of carrying a reusable bottle should be embedded through the provision of public water fountains and access to free tap water.”

Some individuals are, of course, more engaged in the recycling practices mentioned; using reusable bottles, coffee cups and bag for life, helping to work towards a reusable culture. However, enforced legislation such as the 5p bag scheme, shows that government intervention is necessary, not only to highlight the problem of single-use plastics but to enable the much-needed changes to tackle our recently declared ‘climate emergency.’

More than 1.5 million people have signed Greenpeace’s petition urging UK supermarkets to ditch throwaway plastic packaging. If you would like to get involved, you can sign the petition.