Kanye West has been impossible to pin down over the last decade. From titling a song I Am A God to starting a church, it comes as no surprise that West has received heaps of bad press for his ever-changing views.

On October 25th, he subsequently released the long-awaited Jesus Is King, a self-proclaimed gospel album littered with bible references, religious themes and West’s own gospel choir.

The record was quick to reach the Number One spot on the Billboard Album Charts, and the 11-song album contents climbed onto the Billboard Hot 100, although music critics did not receive it as well.

Consequence of Sound’s Wren Graves titled his review ‘Kanye West Even Bores God with the Passionless Jesus Is King.’ The review went on to describe the album’s religious themes as “vague gestures”, while in Pitchfork’s review, which wasn’t as direct but equally as doubtful, they described his interpretation of the gospel as “more dogmatic than faithful.”

Though most of the mainstream media slated the album, numerous Christians have come to West’s defence. This was something unforeseen says Federico Vindver, one of the producers that worked closely with West to make the album. Vindver has known West both before and after his conversion, so we caught up with him to talk about the response he’s seen, and why he genuinely believes in West and his new-found faith.

“He’s one of the nicest people I’ve ever worked with,” he told us. “After the Christianity element appeared in his life intensely, I think he just changed completely. He became even more aware of everything that was happening around him.

“So many times you see people who call themselves Christians but pick and choose what parts of the bible they want to obey, and I think Kanye is on this mission to be 100% accurate on biblical terms and everything, from his lyrics to the way he acts in day-to-day life.”

The album process was different from anything Vindver had previously produced. West took everyone working on the album out to his ranch in Wyoming where they “separated from everyday life problems, and just focused on God, day and night.

“The music took a whole different meaning. It started becoming, ‘is this track good enough for God?’ That became a completely different conversation. It became about analysing line by line, lyric by lyric, every single thing in the album to make sure it’s the best thing we could possibly do.”

The making of the album began to revolve around God, from bible classes to pastors coming out to visit the ranch. Even West’s personal pastor, Adam Tyson, who could not currently chat with us, guided him throughout the process to make sure the album was spiritual enough. “We had bible classes, so we were studying the bible together. It was just a beautiful thing. [It was] very communal, based on love and based on the love of Christ. It was just a dream come true.”

Though the road to release Jesus Is King was no easy one, the album was 12 hours late to its third release date. Initially entitled Yandhi and set to come out in September 2018, leaked tracks were being uploaded to YouTube weekly to indicate the album’s current state. The first sets of songs, which can be listened to online as a bootleg, included copious amounts of swearing and a completely different set of featured artists, including the late XXXTentacion and Nicki Minaj.

It’s clear there was some indecision within the making of the album. Vindver told us one time in the studio, West nearly quit rapping completely: “Kanye said, ‘maybe I shouldn’t rap anymore’ and there were a few people in the room who were like ‘man, no, you have to rap’ so he was like ‘Okay, let me do some raps.’”

The result of this ended up on the definitive tracklist, a song titled Hands On. “He was literally sitting on a little wooden box and hitting it, creating his own drums,” Vindver said. “It was all done acapella, no beats or tracks. He wasn’t miked, he was doing it almost for us.”

Both West and Vindver understood that there would be criticism from the public after its release: “Not only did we have to come with this project for God, but we knew we were going to have a lot of backlash from Christians and non-Christians and a lot of people questioning Kanye’s faith and the whole project.”

After the album was finally released, the response from Christians turned out to be very different than they had first predicted. “I go through YouTube, and social media comments and every Christian is saying ‘Oh my god, Kanye, we are with you, and we support you 100%’ – they’re so proud of him,” Vindver told us.

“I spoke to some of my old pastors who have said attendance in church is going up since this album came out. A lot of people who were maybe at a distance to Christianity, due to the judgemental nature of some Christians are thinking, ‘if Kanye can do this, I can do it too’, people are really getting into the faith more.”

A survey found today less than half of millennials are Christian, so whether West’s fans are truly turning to Christianity due to Jesus Is King is undetermined. However, after the album dropped, Christianity-related Google searches spiked and Christian organisations started to get involved too. The American Bible Society, who publish, distribute and translate the bible recently gave away 10,000 free bibles to West fans.

Meanwhile, West has been traveling around America accompanied by his Sunday Service Choir, a.k.a. The Samples, performing a range of minimalist covers, including West’s own songs (minus the swearing), every Sunday since the start of the year. Titled Sunday Service, the performances started as an exclusive invitation-only event that drew celebrity crowds from the Kardashians to Brad Pitt.

Eleven months on, it’s turned into something far greater. From a Coachella crowd of more than 50,000 people to following in the footsteps of Johnny Cash and performing in Harris County Jail – something West described as “a mission, not a show” – a line taken from one of the album’s tracks, God Is, arguably the most spiritual song on the album. 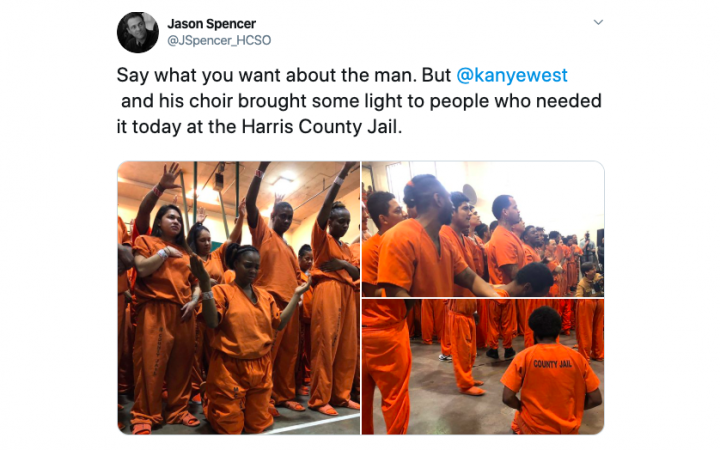 West’s jail visit came just a day before he performed in pastor Joel Osteen’s megachurch, Lakewood. Osteen is a controversial figure who made headlines in August 2017 during Hurricane Harvey, when he refused to open his 16,000 capacity church as a shelter. Described by the Financial Times as a “preacher for Trump’s America”, Osteen is known for his televangelism and has racked up reported the net worth of over $50 million.

It brings up many questions, not only about the authenticity of Osteen, but also on the authenticity of the born-again West, who recently made a guest appearance on James Corden’s Carpool Karaoke where he openly admitted he received a $68 million tax return this year. West described it as a “gift from God”, something that was highly criticised due to his on-going support of President Trump.

Though this isn’t the first time West has flirted with the notion of religion and spirituality, it had a prevalent place in his music since the beginning of his career. From his renowned breakout track, Jesus Walks, taken from his 2004 debut album The College Dropout, which included the line: “I want to talk to God, but I’m afraid because we ain’t spoke in so long”, to his polarising LP The Life Of Pablo, something West, who is never one to shy away from controversy, defined as “a gospel album with a whole lot of cursing.”

Although the album featured highly-respected gospel artist Kirk Franklin, many Christians were offended by his comment and unimpressed with the ‘gospel’ title put on the album, with Christian rap website Rapzilla describing the album as “muddied with cussing”. The article goes on to say there is a ‘spark’ in The Life Of Pablo that suggests he may one day turn to Christianity and three years on; they couldn’t be more on the nose.

New-found faith may just be the tip of the iceberg for West, who plans to run for president in 2024. In his most recent Zane Lowe interview, he warned: “There will be a time when I’m President of the United States, and I will remember — I’ll forgive, but I’ll remember.”