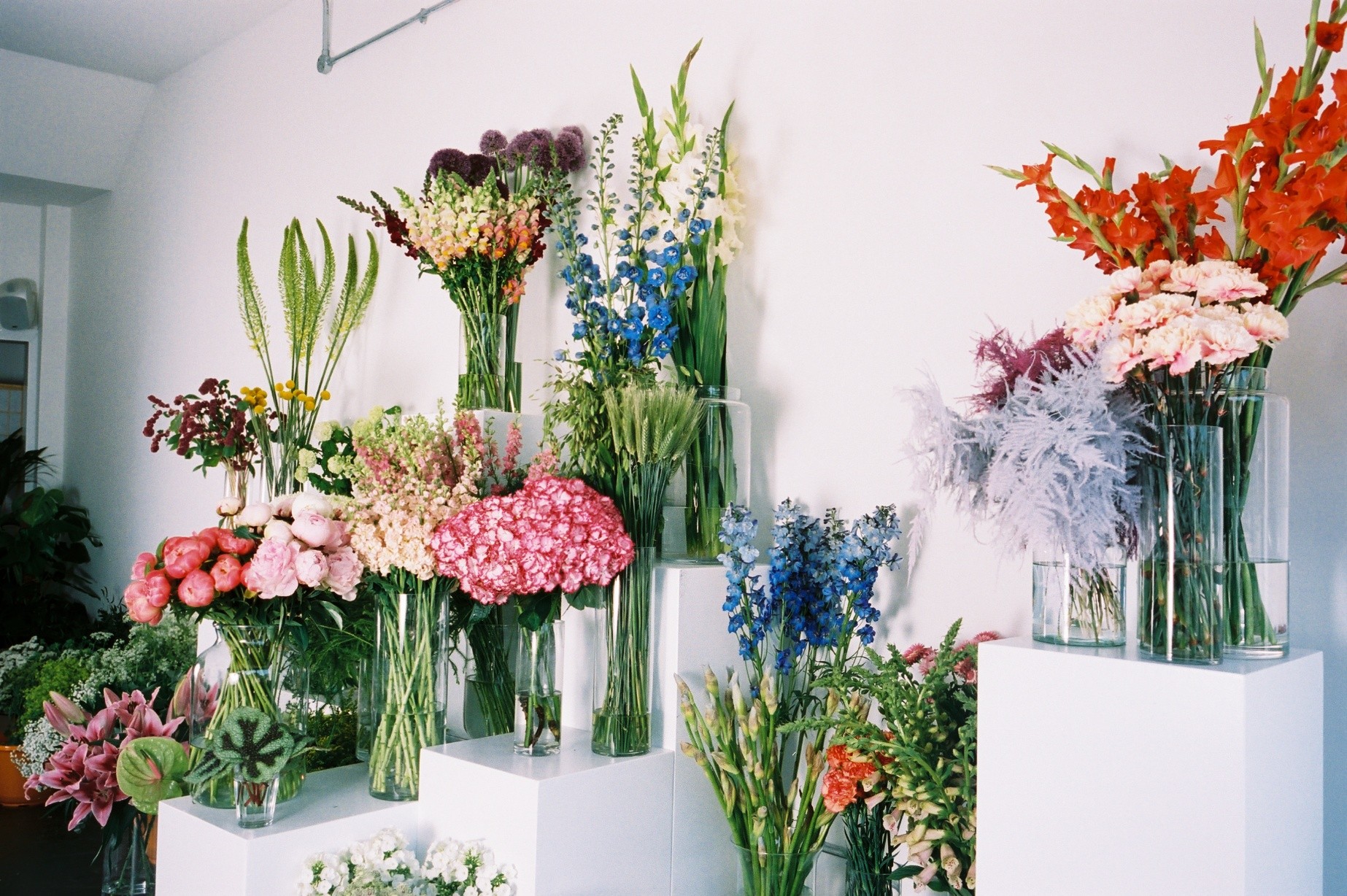 Perched upon plinths like sculptures, these aren’t your mediocre ‘that’ll do’ daffodils and tulips. Exhibited in all their glory are neon pampas grasses, speckled ornamental gourds, hydrangea clouds and waxy flamingo lilies.

A refined pick and mix selection, SAGE flower shop provides a cocktail of colours and textures within one conceptual retail space. Big glass windows allow natural daylight to cast upon every leaf and petal. An impactful shopfront, lacquered in matte black paint, leaves Peckham passers-by with a lasting impression.

Iona Mathieson (25) and Romy St Clair (28), co-owners and brains behind the brand, were originally introduced by mutual friends in 2017. As their friendship flourished, they forged a vision for a floral company they felt filled an untapped gap in the market.

In May 2018, the hard work began; the pair worked as freelance florists, hosting pop-ups, nomadic workshops and commissioned requests until March the following year when their shop opened its doors to the public.

“I wanted to start SAGE to be able to explore contemporary floral design through my own lens, instead of executing other people’s ideas as freelance,” explains Iona, Romy chimes in, “we had to go for it!” 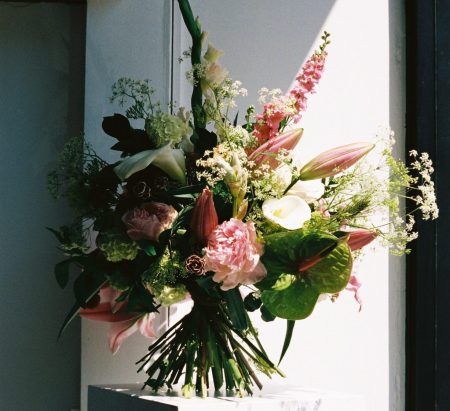 Floral arrangement in the window of SAGE

SAGE sits tight on the corner of Peckham’s ever evolving high street – Rye Lane. “I hadn’t even dreamt about opening a shop 10 months into our existence. We didn’t even celebrate our first anniversary because we were too busy!” says Romy.

The DIY attitude of the area means that SAGE made sense to anyone who shares the same kind of outlook: “It wouldn’t make sense for us to do this anywhere else,” says Romy. Iona elaborates: “South London is in my blood and a huge inspiration for me,” highlighting the fact they themselves are residents and want the business to be local to them and a fruitful addition to their community.

In what sometimes feels like an oversaturated market, their success really relies upon their attention to minor details, personalising each twine tied bunch, and logo stamped paper bags that are all lovingly hand finished.

What makes their company differ from other high street florists is their keenness to constantly be collaborating with other creatives. “We see floristry as a much wider offering than flowers for special occasions, so we make a lot of effort to work within different creative spheres, be that film, food, art, fashion or music; it can really enhance all of these things,” says Romy.

Their shop is brimming with other goods – pro-cannabis independent magazine Broccoli, MALIN + GOETZ apothecary and perfume, ceramics by Londoner Milo Made and romanesco shaped candles by Brooklynite native Piera Bochner.

“Our shop is a beautiful space and using it as a platform to showcase the art and works of others, as well as our own, has always been important to us. Quite honestly, we just like beautiful design,” says Iona.

In the future, Romy explains that their plan is to pack it full of SAGE-curated products including beauty, apparel, chocolate and scent: “We’d honestly consider anything!” This will come along with being more established, meaning they are able to invest in many more brands: “I can’t wait to introduce the next lot,” she says.

As the pair keep busy maintaining the shop day to day, they continue to work freelance on side projects. They’ve acquired an impressive repertoire of collaborations since fruition from Paul Smith, Christian Laboutin, Matches Fashion, Evening Standard to Neneh Cherry at Glastonbury.

“Glossier was a big tick off our list,” says Iona about their bouquets for the progressive, New York beauty brand’s first London event adorning Mortimer House, Romy describes this particular job as a “dream gig.” 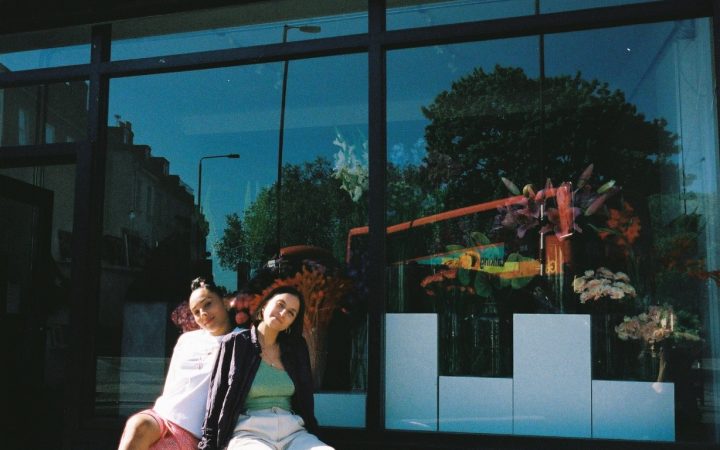 The desire for their services doesn’t stop there, Gucci commissioned the pair last spring to work on their Gucci Bloom fragrance campaign with Dazed and Confused magazine. “I’d love to work in fashion more, doing a runway would be great,” says Iona. “A Fenty show would be sick.”

Little did she know when interviewed that Rhianna was to hire SAGE to cover three floors with their flowers for her brand’s British Fashion Awards after party in December.

Romy wishes it were possible to do flowers for a Hype Williams film/music video: “Those deep blue tones… I’d love that” but she settles for working on a campaign for French brand Jacquemus as a sufficient alternative.

The pair use Dutch suppliers @hoekflowers when dealing with large events but are keen to source as much of their stock as locally as possible.

This involves early morning trips to the New Covent Garden wholesale market, multiple times weekly. Iona says that the effects SAGE has on the environment definitely impact the way in which they choose to run their business.

“We’re aware of the carbon footprint some of our flowers have, having come from faraway places, and we try to offset this by being as green as we can be,” she explains, confirming that all of their green waste is turned into biofuel.

Houseplants and flowers seem to have become vital interior enhancers in many modern homes and Iona believes this is down to our increased amount of screen time: “A lot of people spend their days in front of computers, or constantly on their phones. Having plants/flowers in one’s home can be an escape from that, a reconnection to nature that most people may not get in their day to day life,” she says.

Romy, however, thinks that Instagram has “connected the two worlds” and we’ve seen this trend crop up again and again over the decades. “It’s cyclical. In the late eighties/early nineties people loved house plants, like a big monstera, and huge vases of lilies were my Mum’s favourite.” 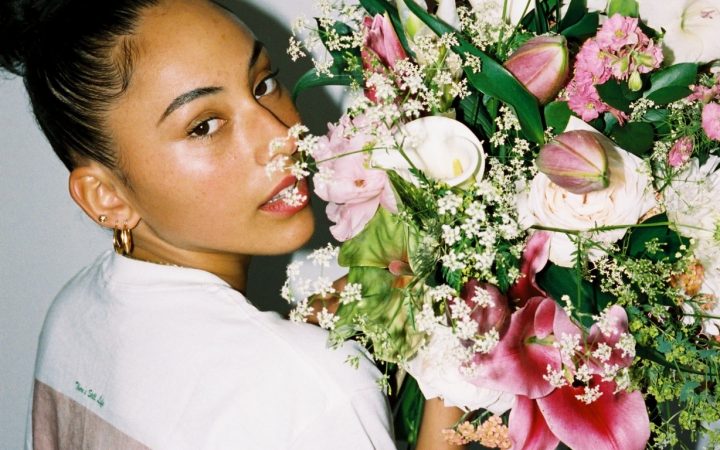 Inspiration for these women takes shape in diverse forms, they look outside of what others in their field are doing, taking an inverse approach. Iona says she’s into “art that’s kind of gross but very beautiful” name dropping two food artists Jen Monroe AKA @badtaste.biz and @paid.technologies’ botanical cakes, expressing her admiration for Masie Cousins’ work too.

At the same time, Romy is heavily influenced by architecture. She cites art deco interiors at Greenwich’s 1936 Eltham Palace, the embellished halls of decadence at Holland Park’s Leighton House, the curvature of Sardinian Cupole di Antonioni and the fusion of industrial metal and glass on rotating screens at Maison de Verre in Paris.

“I take a lot of inspiration from the atmosphere, palettes, textures and shapes, there’s such a seductive romanticism and history in these places.” So different to one another, yet these two visions seem to fuse seamlessly in their combined practice.

Owning your own shop is often just a farfetched fantasy for many, especially in a time when businesses are thriving without the need for bricks and mortar.

Romy tells us: “It is hard competing with the big discounted floral retailers, especially when it comes to deliveries, but we believe we offer such an enhanced product and experience that we sort of occupy different lanes!” Iona describes the reality of owning a shop: “It’s hard work! But it’s worth it.”

Keen to dispel the myth that this type of product is exclusive and luxury, Iona thinks that accessibility is the key to success: “We charge a lot less per stem than other flower shops to try and be as accessible as possible to our local community,” she says.

Running regular, varied workshops from their shop space also allows customers the chance to hear it straight from the source in an informal, intimate setting.

They take pride in working alongside local charities, youth clubs and other businesses, aiming to share their passion and knowledge with as many people as possible. In August, SAGE worked with 13 young locals to build a largescale floral sculpture which wrapped around a CCTV pole in the street for Converse’s #sparkprogress initiative.

Converse also teamed up with Refinery29 in November to provide the duo with functional outfits to wear whilst at work. Together they created a limited run of beige, durable workwear jackets stamped with their red graphic across the back, available to purchase while stocks last. 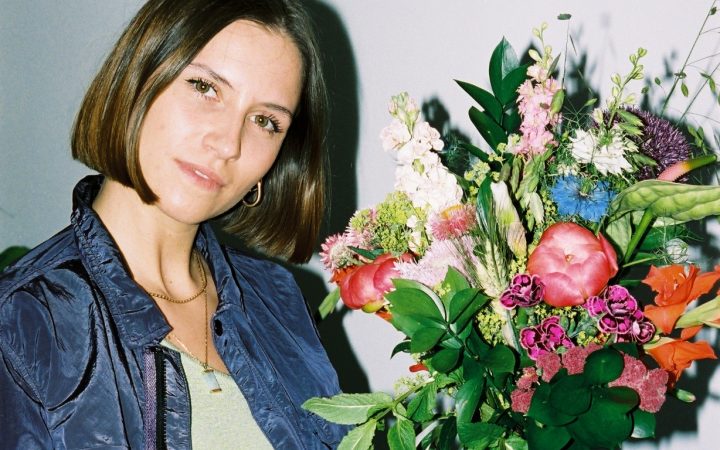 “We’re so grateful for our regulars,” Iona says. “They come in every weekend, they pop their heads in on their way past from picking their kids up from school, we’ve even been sent a couple of postcards from them when they go away!” Clearly their personable, face-to-face approach is paying off. “Everyone always asks us how we’re doing and genuinely wants to support us, and that’s amazing,” she continues.

As well as all the praise they receive in person, these two women get even more positivity from their growing Instagram community, posting each and every new venture they undertake as the brand develops.

“I’m definitely surprised at how quickly it’s grown. I feel very very blessed,” says Iona. Romy tells of “big plans for the next 12 months” explaining that as time goes on, she has “learnt to think big and just roll forwards with the momentum.”

SAGE is particularly supportive of other females in business, demonstrating the importance of lifting other women up. “We have the pleasure of working with such incredible females all the time. Girls running their own things, like our friends Bossy LDN (a music and fashion based creative agency) and Claire Burman (creative consultant) who have worked with us from the beginning and have always been a huge help, we should support each other as much as possible,” says Iona.

Both girls recently featured on Bossy LDN’s new podcast ‘Bossy On Air’ informally discussing contemporary female issues. Romy says that working with women has only ever been positive for her: “We really encourage other girls to take the risk and do their own thing!” she reiterates.

Having both decided to take the plunge and switch careers, this ambitious pair show a huge amount of bravery. Iona says that she was “very ready to leave restaurants behind,” working in Hong Kong at the time. Counterpart Romy was initially in healthcare consultancy and so owning SAGE provided them both with a necessary creative outlet and the opportunity to be their own bosses.

Being branded as a failure, lazy or indecisive if we’re unsure about our current career path is too big of a risk for many women: “I definitely feel like society makes it hard to career change,” says Iona. Romy adds: “Both emotionally and financially it’s tough, it’s so hard to feel like you haven’t wasted time and money when you’re thinking about taking the leap. But the truth is you haven’t, all of the experience Iona and I have gained from our previous roles have definitely contributed to our success in this one!” 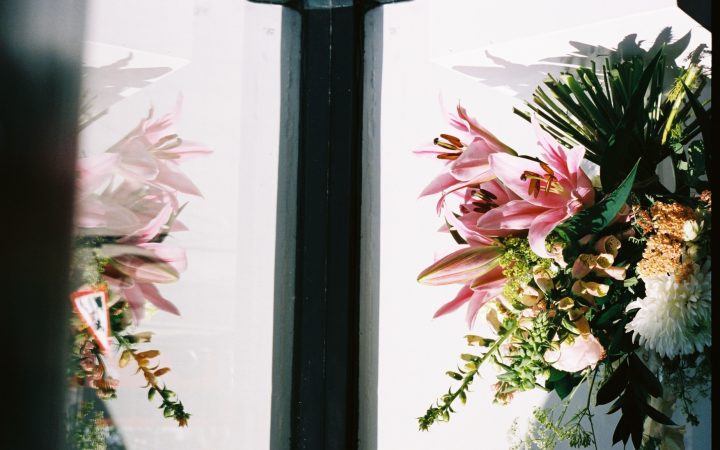 Bunch reflection in the window

According to Romy, success means “being able to run a viable business with fair pay for everyone we work with” and for Iona, it’s “being able to go somewhere every day and create beautiful things and call it ‘work.’” However, their jobs do involve some hardships.

Constantly inventing new visual merchandising methods for their shop can occasionally take its toll: “Sometimes practicality defeats creativity, you’re working with such a perishable product; it will restrict what you can do and how long for,” explains Romy.

Dealing with very particular briefs from clients also has its limitations according to Iona, “but we still always manage to get some SAGE in there! It’s hard being super creative when you’re tired, which we are a lot of the time! Tiredness is a real creativity curb-er.”

The duo are rightfully taking up an increasing amount of space amongst rising London-based creatives. Proving flower arranging can push boundaries and exceed expectations, Romy and Iona will continue to intrigue those at the top with SAGE. Their calendars for 2020 are filling up fast!

You can follow Romy and Iona on Instagram @sage.flowers to keep up to date or pop into their store at 232 Rye Lane, Peckham.

All images courtesy of Rory Griffin