Rather, the Californian landscape architecture studio’s designs are concerned with concepts and ideas. Their designs shape space into something that simultaneously celebrates and expands upon itself; it is modern landscape philosophy in motion and nobody else is doing anything quite like it.

“We’re not really interested in having a particular recognisable style per se,” explains David Godshall, who co-founded Terremoto in 2013 together with his business partner Alain Peauroi.

David runs things in Los Angeles while Alain takes the helm in San Francisco. On the East Side of LA, the studio has created over 150 residential gardens.

“We prefer to let weird ideas, existing site conditions and an open dialogue with the client and builder be the driver for our design methodology.”

This approach is best shown in their projects – take this one from 2019: 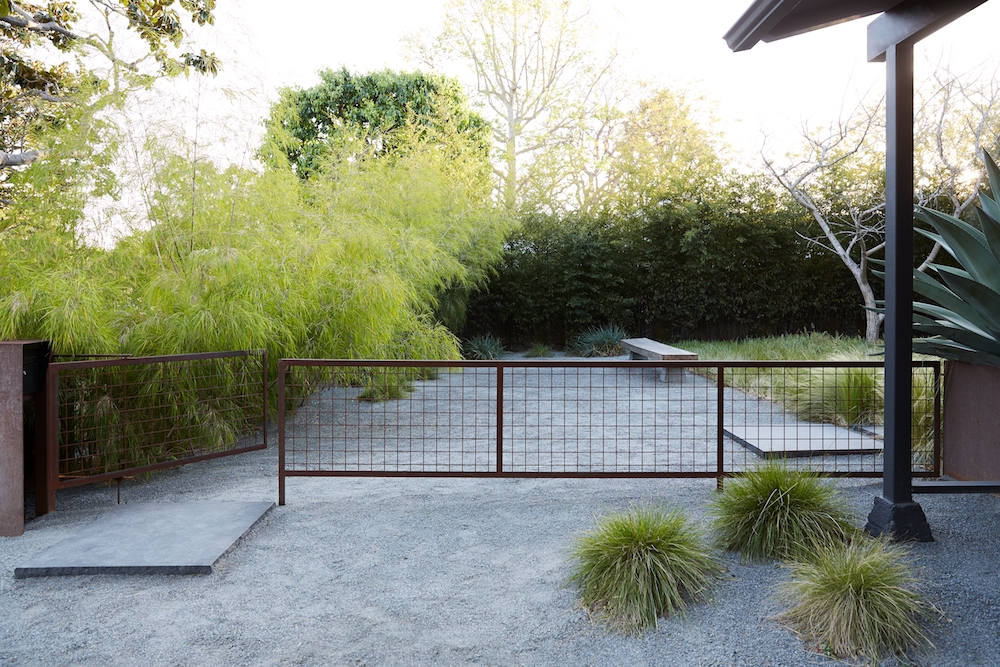 Architect Takashi Yanai paints his bungalow matte black; the neighbours don’t get it. Terramoto tears up the old garden. They bring in strong silhouettes and laid-back colours; Mexican Feather grass (stipa tenuissima) along the path, Century agave (agave americana) and Totem Pole cactus (lophocereus schottii monstrosus) framed by the the building’s now subdued details. All at once it is calm, minimalist Japanese, wild and free Californian.

Terremoto’s gardens are radical in an elegant way and there is meaning and narrative instilled in how they are designed. Native and invasive plants play fight and mingle in a very deliberate fashion. Each garden is a study of the history and culture of Los Angeles and David has gone as far as to devise his own theory to explain how this connects to their work. 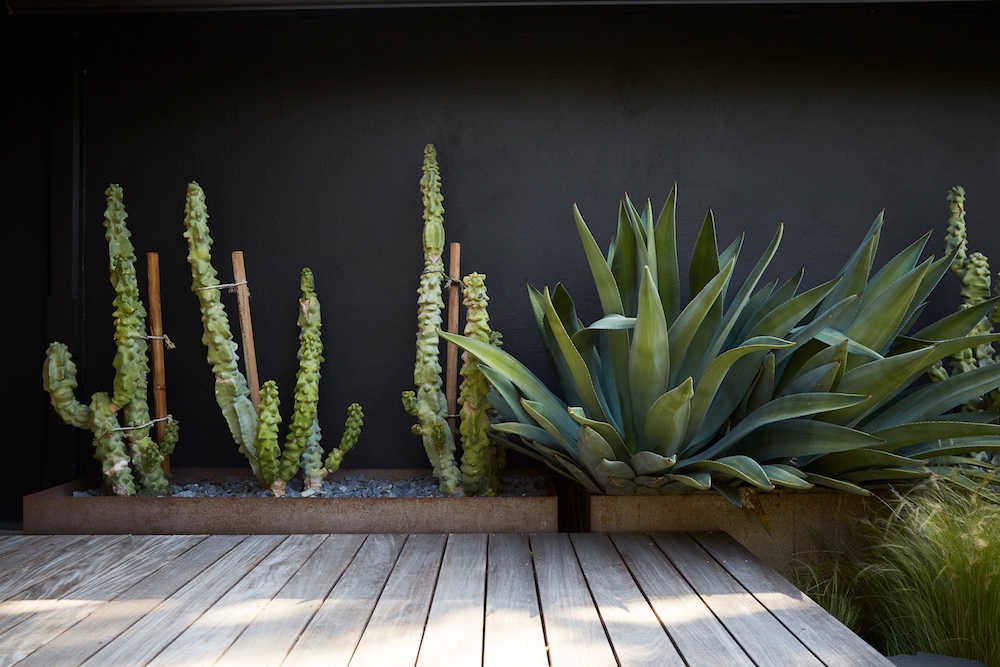 “Horticultural semiotics is our little theory that allows us to read the Angeleno botanical panorama and extract meaning from it,” he explains.

“If you’re able to identify the majority of botany in Los Angeles and if you have a general understanding of the history of the city, then you can arrive at meaningful conclusions as to why the horticulture of the city looks the way it does.

Few landscape architecture studios can claim to be as in sync with their surroundings as Terremoto. Their work exists in self-aware recognition of the ways Angelenos have curated and continue to curate the nature around them. In turn, it is the culture of LA itself to which they can attribute the ability to take such a radical approach.

“California is very liberal and free. There’s less history of garden-making, and in turn, less dogma than there is on the East Coast or in Europe,” David explains.

“Thus Terremoto finds itself in this wonderful position where we can make gardens that include a magical real range of horticultural species in a region that encourages experimentation.”

But this is not to say that Californian attitudes to garden design are wholly progressive. Rather, the region is subjected to the wider historical and cultural trends of US garden design, something that can present unique challenges when trying to bring the Terremoto philosophy into a physical reality.

“Garden design in California from the 1940s to the present day, wasn’t really grounded in region, place, or ecology,” David suggests.

Anywhere you go, you can get a sense for what he is saying. As in almost any US city, LA plays host to a certain kind of garden; a post-war act of self comfort. A clipped green lawn, box hedges and rose bushes, a living wall to mark off one little square of the American dream. In LA’s sprawling metropolis, these gardens are plentiful. 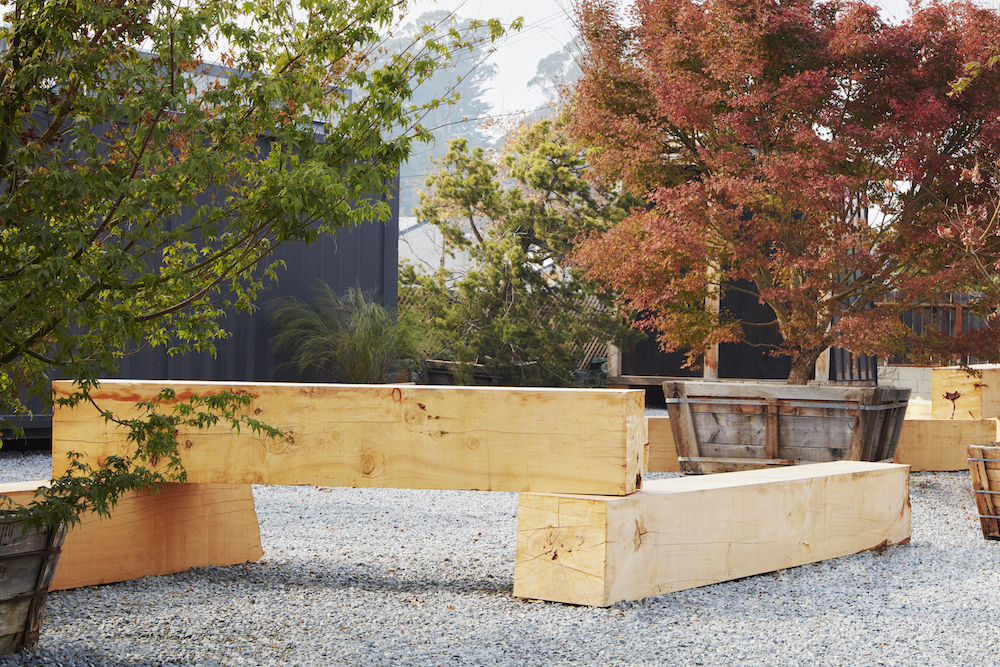 Terremoto’s design for Marinship Studios a waterfront site inhabiting a former World War II shipbuilding factory. The garden is built as a modular ‘kit’ where furniture and planters can be rearranged using a forklift [Caitlin Atkinson]

Terremoto’s dynamic, long-term projects buck the trend; plants do not like to be rushed. They change with the seasons and they do not always stay green. Such is the very normal, natural way of indigenous plants. It is not what people are used to, but a change in mindset is starting to happen.

“We’re living in a moment of great change and transition as it relates to residential garden-making, and people are beginning to understand that their home gardens should be exercises in native and regionally appropriate ecology,” he suggests. In pursuit of normalising this relatively modern understanding, David and his team have had to become teachers of the new tradition.

“Native gardens, and regionally appropriate gardens for that matter, come with a more seasonal aesthetic than what people have perhaps been accustomed to in the previous decades. Thus in California, part of our challenge as landscape architects is ushering in this new era of garden-making that no longer includes grass lawn or foundation shrubbery,” David says.

“Educating our clients becomes a pivotal aspect of what we do.”

In the summer of 2019, Terremoto built Platform Park and brought their new way of doing things out into the open. What better way to educate the people of LA county than to give them a chance to immerse themselves in the product of this radical method.

A once derelict site beneath a Culver City underpass becomes a place to gather, to pause, to watch it all happen. It is full of life, but the shadow presents a challenge: how do you make a garden largely hidden from the sun, in a place too hot to grow plants from cold climates?

Horticulturalist Jonathan Froines, who worked with Terremoto on the planting design, did his research and found an answer: borrow from the neighbours.

The Plume poppy (bocconia frutescens) is a Mexican native and Los Angeles used to be Mexico. Having those deep-lobed leaves on the scene just makes sense. African Linden (sparrmannia africana) does not need a lot of light to get 12 feet tall. Perfect for the lively, shady pocket with E-Line trains rolling overhead. It is unique for its haptonasty; contact with its stamen from a person or pollinator makes it ‘reach out’ – a social plant for a social space. 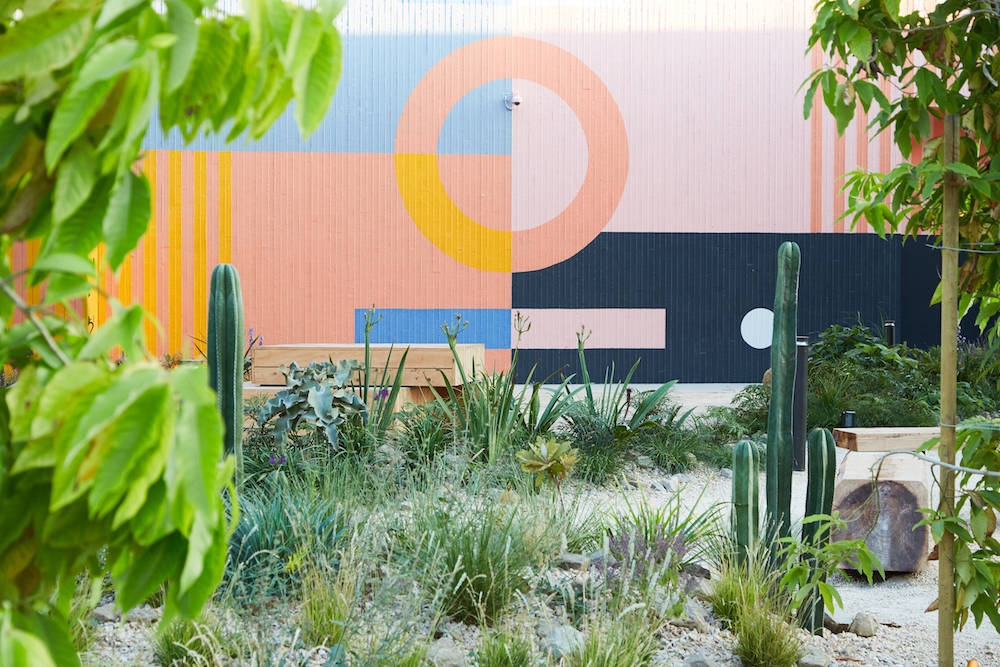 There are the tough guys, too. Cast Iron plant (aspidistra elatior) gets its name from its mighty resilience – shade, drought, whatever, it is just happy to be there. The Dragon Tree (dracaena draco) has a figure as bold as its name. It takes a while to get going, but give it time and it will become quite the scene-stealer.

All of it comes together as an energetic, ‘anti-civic’ space. Rather than tell you where to go, the garden offers itself up for exploration, interpretation and habitation. Projects like these will be essential for winning hearts and minds in the battle for better garden-making.

Californian attitudes are changing and so is California itself. Like the rest of the world, Los Angeles is getting hotter. Plants must adapt to survive and with them, so must the people designing the spaces they inhabit.

Terremoto are increasingly using plants that can tough out far hotter summers, whilst addressing the state’s perpetual water access issues take on further prominence in their planting plans.

Green spaces require further consideration to exist with the modern climate, but when created with ecology in mind they have the potential to become a valuable asset in the ongoing battle to protect the environment.

Can garden design save the world? David believes it can certainly play a role: “Over the past six years of practicing in Los Angeles we’ve built over 150 residential projects on the East Side of the city. That means there are now 150 ecological islands that previously didn’t exist, through which pollinators, birds and native insects can move.” 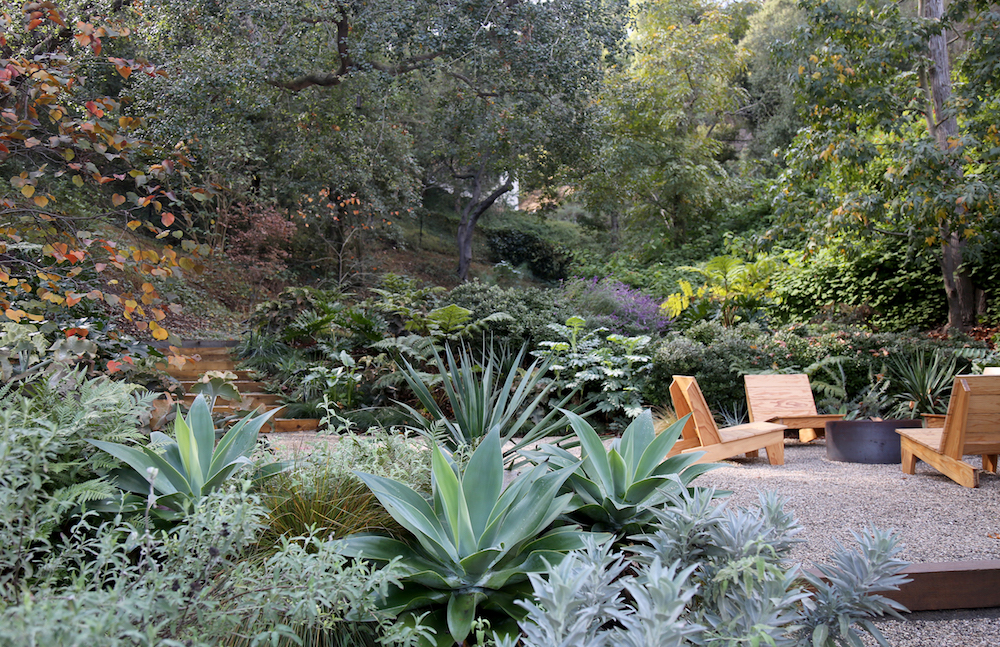 Design for a year-long residential project; reviving the site of a neglected post-modern home in the hills of Bel Air [David Godshall]

“Our local oeuvre of work thus creates a patchwork ecology of green spaces that, collectively, can begin to have major ecological reverberations. This is part of the power and strength in designing residential gardens.”

As awareness of the planet’s serious climate issues becomes more widespread, so does the desire of the individual to try and have an impact. Naturally, not every Angeleno with a passion for ecology can go down the ‘full garden rebuild’ route.

David’s response is Plant Material, an: “ecologically and aesthetically opinionated nursery,” that challenges the norms of retail, the way Terremoto does those of garden design. The nursery is its own thing, but the two businesses are philosophically inseparable.

“Californians are now quite deeply beginning to understand that the way we’ve been gardening our homes over the past decades is no longer appropriate, and that as citizens, families and communities, it’s time to change,” David explains.

“That said, this change can be confusing and perplexing, because it’s a brave new horticultural world! Plant Material wants to help with that.”

Based in LA’s Glassell Park neighbourhood, the nursery mixes horticultural goods — plants, seeds and tools — with a selection of apparel, reading material and art objects.

The latter are largely produced by or in collaboration with local artists, such as Jacob Hopkins and Sarah Rara. The nursery site, designed by Terremoto, also provides a space for art and live music; David describes it as: “a striking example of what the post-retail world could look like.”

“Our plant offering is about two thirds native, 100% regionally appropriate and has an earnest and blunt ecological focus. We’ve been open about a year and we feel like our mission and goal is resonating and the energy is good.”

Positive energy, broad cultural awareness and a desire to do things differently; these are key to the philosophy of Terremoto.

It is easy to see where it comes from. Amongst the twelve members of his team is an eclectic mix of past careers, ranging from movie set production and sculpture to music and industrial design.

Art and culture are referenced throughout the studio’s work and by remaining open to influences far beyond the sphere of landscape architecture, Terremoto are able to operate outside of the traditional definitions of how a studio must go about their practice. 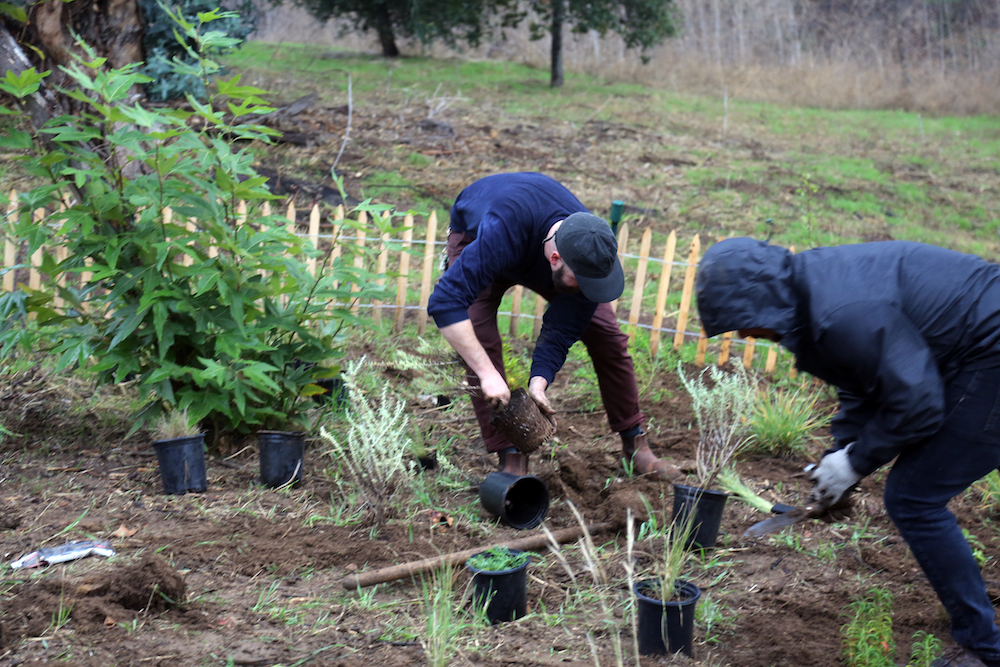 Test Plot, a joint project between Terremoto, Saturate and the Citizen’s Committee to Save Elysian Park, provides a space to experiment with ecology for future efforts to revitalise the park [Dawn Wang]

“We take great inspiration in the work of conceptual artists like Robert Irwin,” David elaborates. “I think the way his paintings were often manifestations of almost psychic wanderings perhaps relates to the way we practice.” Like many in the team, his personal interests have become intertwined in his work; he’s a landscape architect by trade and a punk rocker at heart.

“Punk rock took the paradigm of how a rock and roll band was structured and functioned and then said ‘yeah, we’re not going to do that’ and used the instruments to create a sound that was wholly anew and different.”

“A simultaneous reverence and complete disregard for history. I’d like to think that Terremoto’s approach to garden-making has strong parallels to that.”

Featured image by Caitlin Atkinson. All images courtesy of Terremoto.

By Atiyyah Ntiamoah-Addo
11 Mins read
We sit down with the influential writer and activist on climate justice, animal rights and alternative systems in fashion.
Life

By Atiyyah Ntiamoah-Addo
4 Mins read
We explore the impact and toxicity of fast-fashion, through the lens of young students and individual responsibility.
Culture

By Aman Hafiz
7 Mins read
We explore the reality of a character called Vincent van Dope, the drug dealer alter-ego of someone who has made enough money to turn his life around.