It is perhaps their recognition of the importance everyday objects, that has allowed them to develop an approach to design that creates quality products, furniture and spaces.

The pair began collaborating on industrial design products in 2012, and in 2014 founded Visibility, a New York-based studio that has been internationally recognised for its thoughtful, well-designed creative output.

Together they have gone on to design everything from shelving, stepladders and paintbrushes to yoga blocks and cookware, working with a plethora of clients who recognise their sensibility for constructing and re-interpreting objects in an innovative manner. 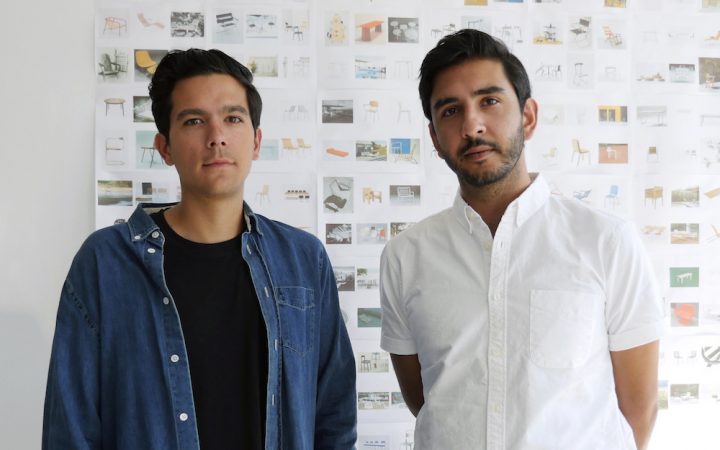 But it all started with an acknowledgement of the importance of the things we interact with daily, no matter how small; a recognition that developed early in life. “I think we both come from families that cherished the things they had; objects, heirlooms, things that represent milestones,” Joseph explains.

This approach allows the pair to subvert the idea of ‘mundanity’; any object can have value and by re-imagining ordinary things, it is possible to subtly improve the lives of those using them. In much of the studio’s work, this appears to start with a recognition that form and function are far from separate. Rather, the two elements are intrinsic to one another and a thoughtful approach to one area can greatly benefit the other. 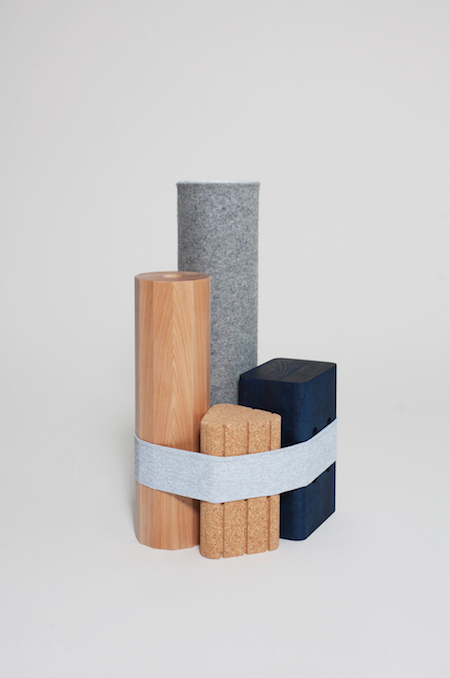 Visibility’s ‘Shapes Bundle’, a set of versatile yoga accessories that are designed with a deliberate ambiguity so as to function in any number of exercises [Visibility]

Take the ‘Shapes Bundle’, a challenge to the clinical appearance of yoga accessories. Created in 2015 for the Wallpaper* Handmade project, Visibility worked with fitness apparel brand Outdoor Voices to design exercise tools that can exist in day to day life, rather than just in the context of yoga.

The design uses playful shapes and natural materials, without sacrificing ergonomic suitability for their purpose. The bundle’s three blocks, yoga mat and resistance band appear to fit together organically and are designed with a clever ambiguity that leaves them open for use in various exercises. It is a perfect case study of Visibility’s competency in striking a balance between form and function.

By considering the wider contexts of objects, it is possible to interpret them in a way that gives them life far beyond their standard purpose. As such, it is often in fields outside of the world of design that skilled designers can look to for new ideas.

“Formula One is my latest interest,” Joseph admits. “The cars, equipment and teamwork are inspiring. Engineers, designers, manufacturers and drivers collaborating together for an almost superhuman outcome.”

Sina draws from nature, with birds being a long-term obsession. “They’re remarkably beautiful creatures; the interplays of colour, whether functional or not, are deeply moving.”

The pair’s appreciation for the surrounding world lends itself to producing original concepts; the ‘Barbican’ bar trolley demonstrates this in practice. Produced for homeware brand Dims, the trolley showcases the careful consideration of the day to day context in which an object exists, something inherent in many of Visibility’s designs.

Architectural qualities are channeled into a piece of furniture; like a building defined by the lived experience within its confines, it is what the trolley carries that gives it purpose. The piece’s muted yet stylish form, constructed from ash wood and steel, is a direct response to this idea. 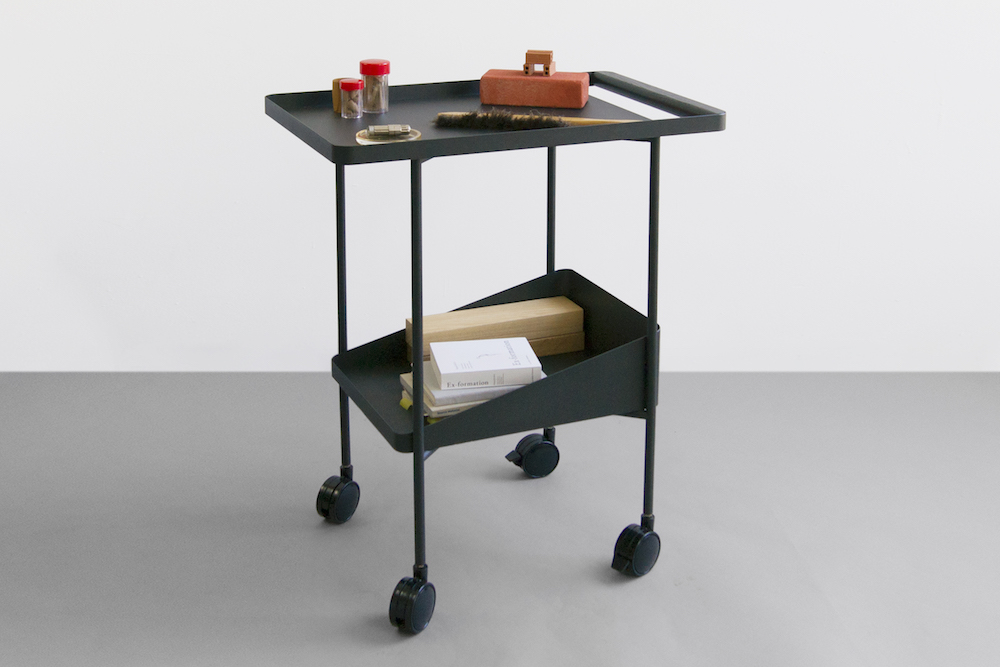 The ‘Barbican Trolley’ brings architectural qualities to a piece of furniture, putting an emphasis on what the trolley holds rather than the piece’s form itself [Visibility]

It is no surprise that the studio’s work has expanded into the fields of interior architecture and design. Objects and the spaces they inhabit are intrinsic to one another and Visibility’s insight concerning the former has transitioned seamlessly into how they create the latter.

In 2017, the studio designed a mobile concept store for THINX, a company who produce period-proof underwear. Situated inside the back of a truck, the store makes effective use of the long, narrow space, incorporating a central display with intuitive storage solutions. A translucent partition offers privacy for appointment consultation’s without making the space as a whole appear smaller.

Inspired by the work of surrealist painter Giorgio de Chirico, the interior is set in a warm, modern colour palette, accented with clear windows displaying empowering typography that does well to defuse any clinical feeling a mobile space might otherwise evoke. 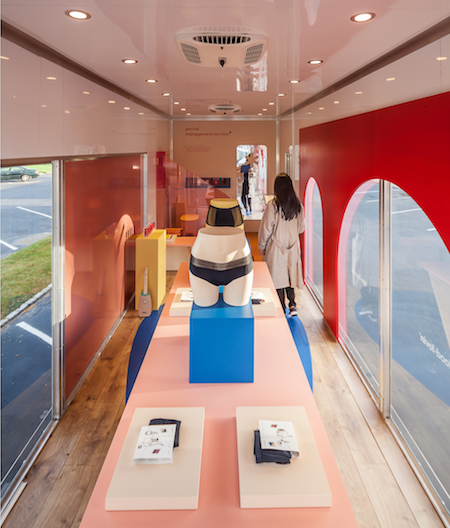 It is a fittingly frank space for a client set on changing taboos; exactly the kind of people Sina and Joseph look to work with. “We look for a partner to collaborate with that has the proper domain knowledge, but also a willingness to let us fully explore. We want to try new things with companies that bring manufacturing know-how or a heritage of bold design,” Sina explains.

“We also work with companies who just want to challenge the status quo and are excited to reinvent something.”

A 2019 project for Lalo, a baby goods start-up, did just that. The task — to design a pram both simple and comprehensive in nature — resulted in ‘The Daily’, a pushchair praised for its streamlined nature; no extras required, everything comes as standard.

Designing a pushchair presents a unique challenge; it is an object with two distinct users — the parent and the child — with very different needs. Additionally, a long list of consumer regulations must be followed for a product of this nature to make it onto the market.

“That project definitely created a lot of anxiety and headaches,” Joseph reveals. “It’s hard to push the boundaries of a design when safety is of the highest concern. We’re happy with the outcome though, particularly the soft-goods element.”

The pair found a solution through research. The pram’s functionality emerged through conversations with parents; its final design reflecting their desires as users, as much as the basic needs required.

Whereas stability is a given in a product of this kind, it is subtler quality of life innovations that have the greatest impact in the long run. Removable parts give the pram an accommodating, modular feel, better suited for cleaning and storage. Pair all this with an attractive minimalist aesthetic and it is clear the parent has been considered as much as the child passenger. 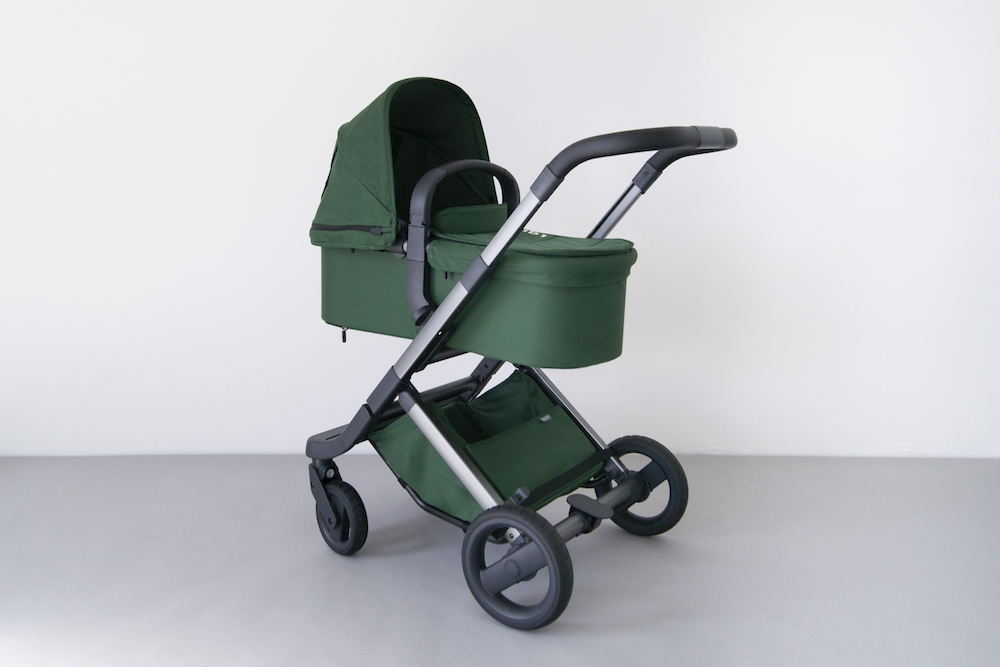 ‘The Daily’, Joseph and Sina’s take on the pram. Many subtle considerations have been made for both users; parent and child [Visibility]

The end result is testament to the understated ways in which Visibility’s designs cater to the user without compromising accessibility, all whilst identifying ways to solve the overlooked design problems found in everyday objects.

However, many of the design problems that most urgently need solving are concerned not with use, but post-use. Visibility have addressed this with their concept for Myro, a refillable, plant-based deodorant designed with ecology and sustainability in mind.

Unlike a conventional roll-on deodorant, Myro’s plastic chassis is permanent. It is the deodorant itself that is replaced; fully recyclable ‘pods’ can be swapped out using an intuitive mechanism, significantly reducing the amount of plastic waste produced.

As with many of the pair’s designs, careful attention has been paid to the tactile experience, ensuring ease of use while giving the packaging an eye-catching aesthetic.

Myro earned Visibility a Wallpaper* Design Award in 2019; the product was highly praised for its elegance and environmentally conscious concept. Joseph’s views on the industry’s environmental responsibility suggest that an awareness of these issues will continue to play a great role in Visibility’s work going forward. 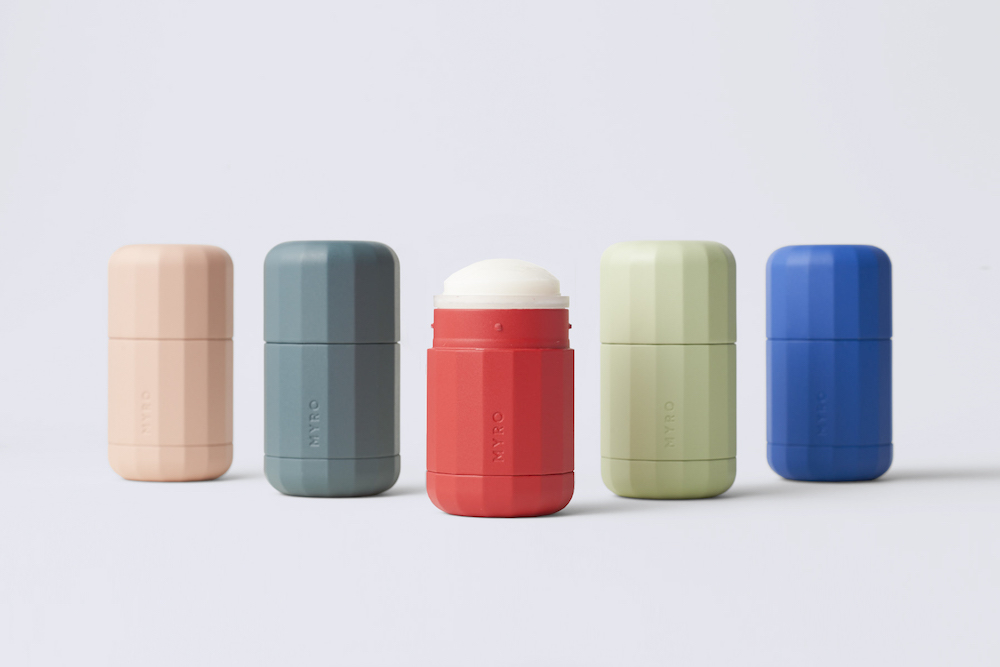 The refillable, plant-based Myro uses 50% less plastic than a conventional roll-on deodorant; it picked up a Wallpaper* Design Award in 2019 for its forward-thinking environmental responsibility [Myro]

“These are questions that are not easily answered, though, and I wonder if the industry is up for the challenge.”