It might not feel like there’s ever any good news for the planet, however, 2019 did see some pretty important progress – Extinction Rebellion protests, school climate strikes worldwide, a ban on a wide variety of single use plastics and, last but not least, Time‘s Person of the Year was 16 year old climate activist Greta Thunberg.

For the first time ever it looks like we’re at least starting to head in the right direction.

Everyone needs to help and football clubs are certainly not exempt. It can seem a million miles away from the environmental crisis as you look out onto the perfectly kept, green playing surface; but as an industry, football’s carbon footprint is big and things need to change.

No-one in the world of football is as environmentally conscious as the Forest Green Rovers. Nothing matters more to them than the environment (and the football obviously). They’ve even been described by FIFA as “the greenest football club in the world.”

They are the worlds first completely carbon neutral football club, achieving accolades from the United Nations, and along with this, the only completely vegan football club in the world. Impressive stuff right?

That’s just the tip of the iceberg of what these guys do: they have a solar powered lawn mower, their shirts are bio-degradable and made from recycled material, they have a ban on harmful plastics, their rainwater is collected to be reused and they even use bamboo shin pads. 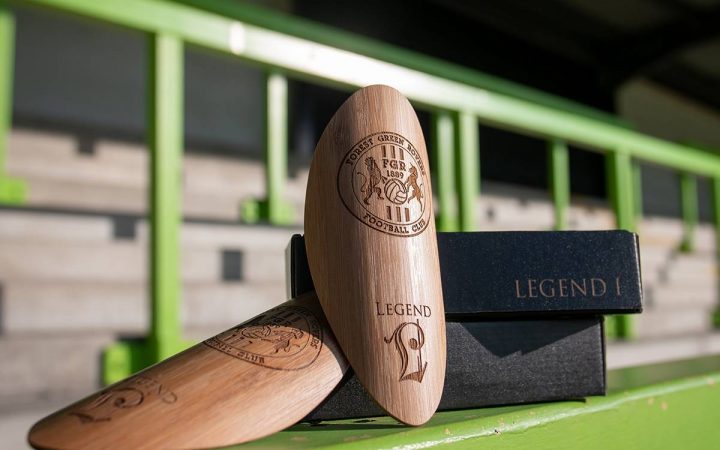 Forest Greens’ new bamboo shin pads. Made by Legend Soccer and 50% bamboo. They will replace plastic shin pads in the players’ equipment.

It’s probably not like any football club you’ve seen before. Their home pitch, the New Lawn, is tucked away in the rolling hills of the Stroud Valley. The ground is located in the picturesque village of Nailsworth in Gloucestershire. It has a population of just 5,800. Certainly not your stereotypical League Two club, but, after all, who wants to be normal?

Choosing what you eat carefully is one of the biggest ways you can impact the environment – one of the main reasons why Forest Green made the decision to become the only vegan football club in the world. “Since working at Forest Green I’ve been a lot more conscious of my carbon footprint,” said Jade Crawford, head chef at the club.

“I think it’s really important football clubs take the environment seriously along with any sports ground that has the power to make a difference,” she told us. “I think if Forest Green (a small town team) can do it and make a huge name for themselves then it should be easy and necessary for larger clubs to go green.”

Jade’s been running the all-vegan kitchen for a couple of years now. Dale Vince (owner of the club) kick-started the green revolution at the Rovers by turning the club vegan five years ago. We chatted about good food, veganism, the planet and how she ended up working at the Rovers. 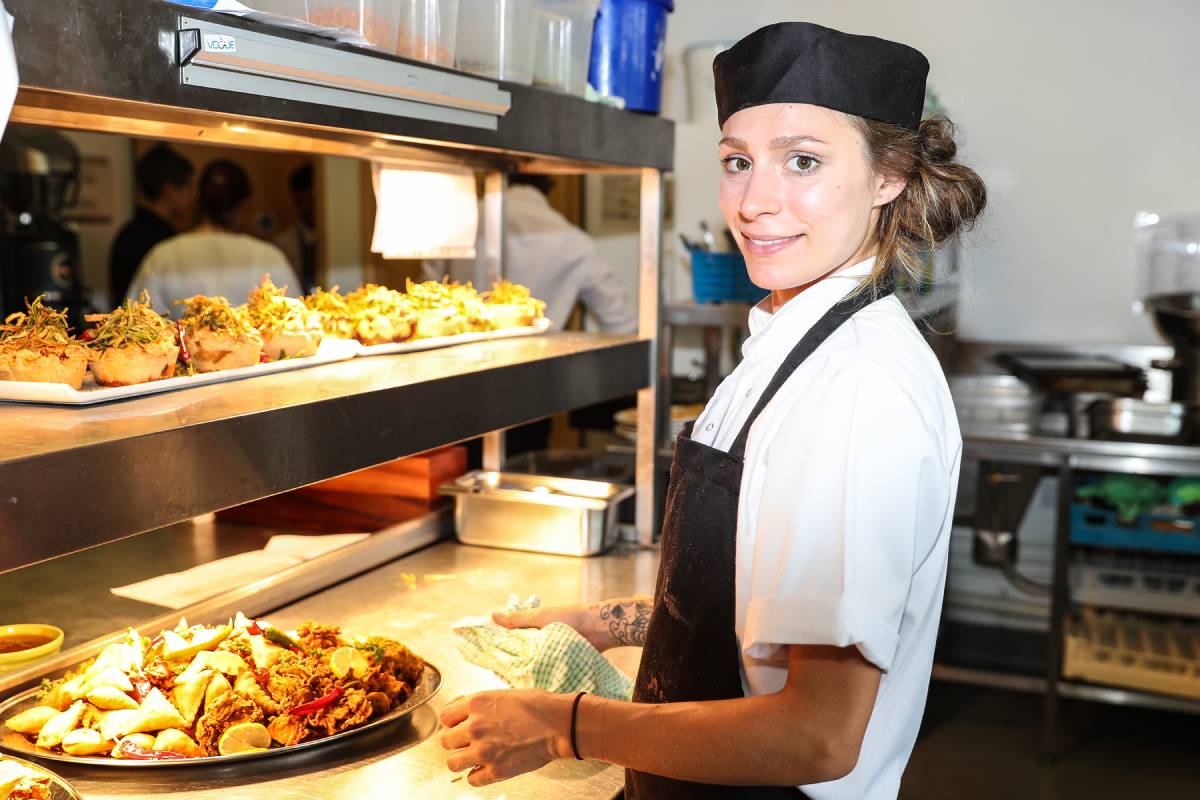 As ​an on-and-off vegetarian throughout her older life, Jade turned vegan almost three years ago. She explained that looking carefully at the food she eats has always been on her mind: “Nutrition and looking after my body is a big part of my life, cooking came alongside that and I am grateful every day that I get the opportunity to do cook every day in my career.”

Like most chefs, Jade loved cooking from a young age. She worked in restaurants for parts of her life, then after some time away in Australia in a Health Food cafe, her love for cooking was renewed.

“I fell back in love with cooking, when I started cooking with plant-based foods and realised how much you can do, I never looked back,” she said. It was here she began seeing just how good a vegan diet can be for both for the planet and for your health.

“I was studying plant-based nutrition in my own time and that really interests me, I wanted to challenge myself and change my body, I want to see if I could do it, and it’s great, highly recommend.”

Owner of Forest Green, Dale Vince, a green energy mogul, became the club’s major shareholder in 2010. His company Ecotricity provides the club’s electricity produced entirely by green methods, they also serve as the club’s main sponsor. With the planet in mind, he revolutionised Forest Green.

“It breaks my heart thinking about what is happening to our planet. I don’t have kids but one day I might. What kind of future are they facing? We need to think of our future generations,” Jade told us.

The Green Rovers seem to be smashing it on and off the pitch by coupling good food with good football and an eco-friendly ethos. Vince has taken the small club to all new heights, and his ambitions continue to grow.

It’s clear these guys are going above and beyond for the planet. It’s just what they do: “We reuse the oil from the fryers, that will be​ recycled into bio-diesel​ for the tractors. The pitch is organic and chemical free, the majority of football pitches are treated with chemicals​​.”

It never stops and even the playing surface is environmentally friendly. “Our groundsman, Adam, is amazing at what he does, he really knows his stuff, he uses natural nutrients from other plants and sometimes even herbal teas!” Jade said. 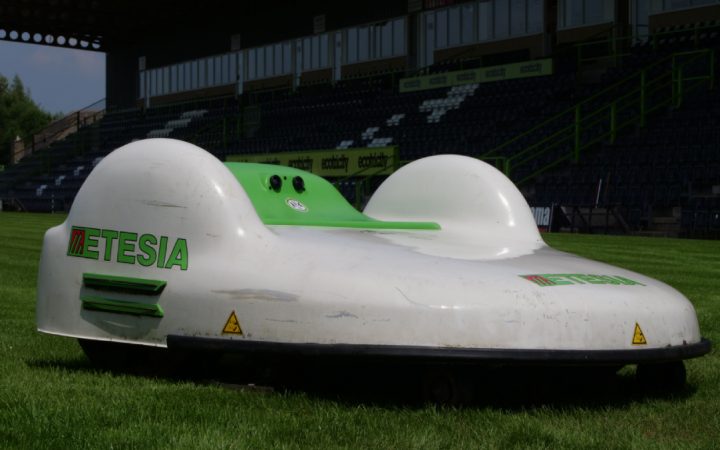 But Forest Green is a football league club, and you can’t win football games just by being green. Jade has the same job as any other football league chef: feeding fans, players, the chairman and everyone in between.

“​We have a lot going on at the stadium, from matches to large events, children’s education and cooking classes,” Jade said. It’s non-stop. Football clubs are always fast-paced and Forest Green is no exception.

“All week I’ll be cooking, I prepare a lot of food throughout the week that I can freeze. Obviously not fresh things like curries and chillies, but things like pies, sausage rolls, things like that. I’ll get them prepped in advance,” Jade told us. “But on Fridays, if we’ve got a match I’ll just be cooking. To be honest, I’ll be cooking non-stop! I’m just constantly cooking or writing menus.”

It’s a big job. “We have lots of events up here, ​it gets pretty hectic and every week is different which is amazing. I love a challenge!” she told me. “The football club opens peoples’ minds, people that would never usually think to try vegan food. If you’re coming to Forest Green to watch the football, you’re going to be vegan for the afternoon and there is so much good in that!”

It’s a long way from the stereotypical burger and chips that the normal pre-match meal, but as Jade says it will certainly open people’s minds to eating vegan options.

Cooking for the players is a huge responsibility. But unlike other clubs, Jade needs to meet the players’ nutritional requirements without using dairy or meat products. “Athletes have special nutrition needs to support a high level of performance,” she told us.

The squad need to be fuelled, recovered and ready to go again week-in week-out for the whole season. If they aren’t the season could fall apart very quickly. Injuries can often cripple a team. Eating right along with solid training are key to avoiding injuries and being prepped for games. Luckily for the Rovers, Jade knows what she’s talking about. 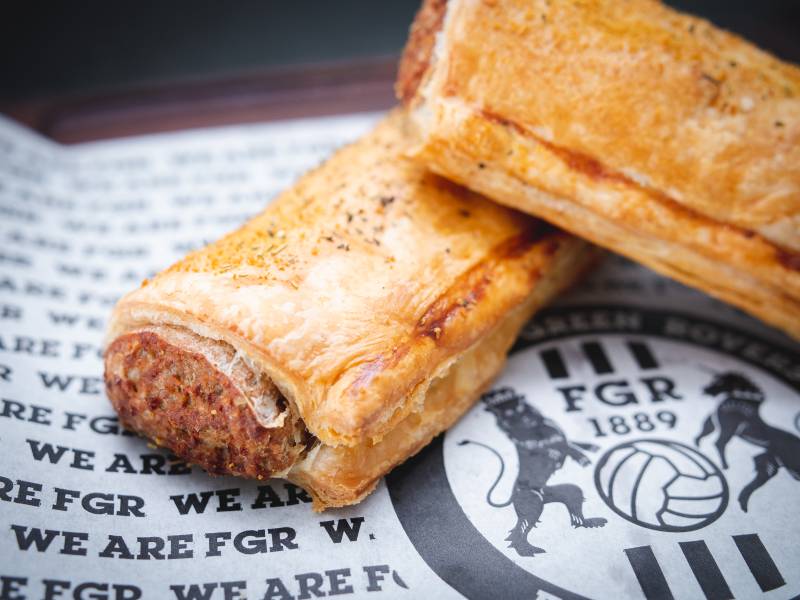 “There are reports on scar tissue healing faster on a plant-based diet. When done properly and taken seriously an athlete will thrive on a plant-based diet. The players have said they have noticed a difference and their energy levels have increased; however not all of the players are full-time vegans, it’s their choice, but when they are working home or away they are on a strict vegan diet,” Jade said.

The push for promotion from League Two is well underway at Forest Green; Jade and her team are a key to this success. “I’m not the one scoring goals and doing the training, the food doesn’t win football matches, but what it does do is keep the players fit, healthy and ready every week which is a huge part of any successful team, plus it gives our fans a totally vegan, eco-friendly experience which hopefully they’ll take away with them and make changes of their own.”

Forest Green’s profile continues to grow. As well as climbing league tables, the number of off-field accolades is constantly rising. “It’s pretty amazing isn’t it, it’s such a small little stadium making such a big difference. I absolutely love meeting new people in general, especially people I’ve looked up to in the past like Jamie Oliver,” Jade told us. 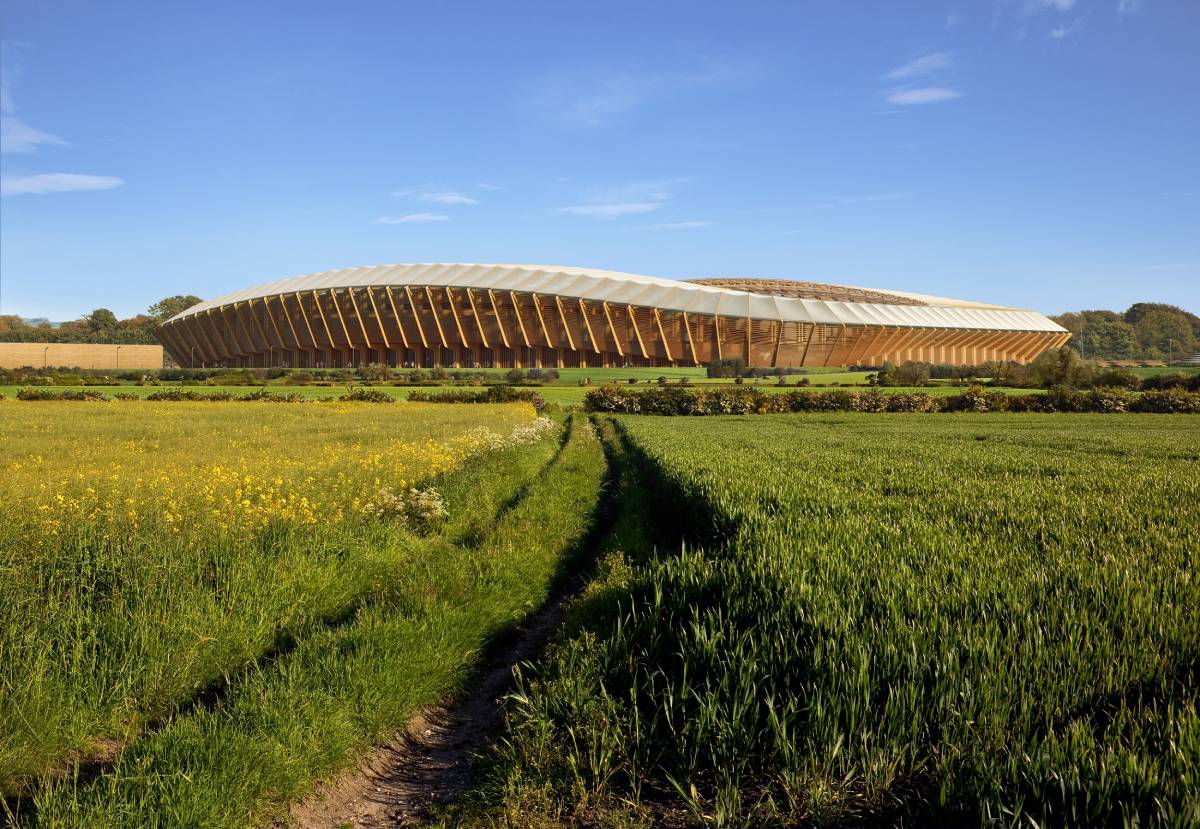 Forest Green are a perfect example of what football clubs can do to help the cause. They’re game changers, trailblazers, doing things that no one has even thought of before and people are starting to take note.

“Larger stadiums are now adding vegan options to their menus. People from other stadiums visit to learn more about the sustainability principles we follow here. It’s all about reducing your carbon footprint one step at a time – but its certainly possible, no matter how large or how small!” Jade said.

Learning about what they do at the Rovers was such a great insight into all the things not just football clubs can be doing, but all of us. “We run a community programme called ‘Fit 2 Last’. Local schools will spend the morning learning about Forest green, our sustainability, recycling, the football and the food,” Jade told us.

“​The children will then learn to cook a vegan dish taught by myself. I think it’s very important to teach children about plant-based nutrition from a young age, so that they can make an educated decision on what to eat.”

All the work they do here is important. Education, sustainability and reducing as much waste possible. Even from the short amount of time I spent talking to Jade, I learnt so much. It’s even inspired me to try being a vegetarian, and not just for footballing reasons.

The club has recently had plans for a new all-wooden stadium approved as they move onto the next stage of their innovative environmental mission. Other football clubs certainly have some catching up to do as these guys are sitting top of the eco-football table.

Special thanks to Jade and the Forest Green press team for all their help. Follow their socials on Instagram @jadesgreenkitchen @fgrfc_official