The fashion of skate culture has taken off to a place people never would have imagined in recent years.

Skating has always been a sport which has distinguished its own culture, it’s an adrenaline junkie’s dream, full of challenges, excitement and thrills. These are just a few of the factors that have enticed people since it emerged in the 1940s; this, and the effortless coolness that comes with it.

It didn’t take long for the fashion industry to recognise that and use it to their advantage. From high fashion photoshoots to runway debuts, they have not been secretive with using skate culture as an inspiration in their work.

They’ve often used skatewear as props and some designers have created similar designs as popular skate brands; the only difference being the unaffordable price tag. This has been sure to create conflict amongst the two industries.

In 2016 Dior Men had their Autumn/Winter show in Paris, their runway was transformed into a skatepark with illuminating LED lights outlining skate ramps and half-pipes. The designer, Kris Van Assche, had evidently taken inspiration from skate culture in his collection; something very unexpected for a fashion house like Dior.

The collection was praised for being “more free” by Vogue Runway due to its cool everyday choice of clothes, however it still lacked a real correlation to the culture. There were crisp white shirts with sharp bow ties, black cargo trousers and leather, as well as bold black and red checkerboard prints.

Jeremy Scott had taken this approach even further with his Moschino collection in 2013, to such an extent that he even received a lawsuit from leading skate brand Santa Cruz for copying Jim Phillips’ iconic artwork designs in his Autumn/Winter collection at New York fashion week. Scott showcased clothing and handbags on the runway which seemed to represent a very similar design to Phillips’ well-known work on skateboards and surfboards.

Bob Denike of NHS Inc, who distribute Santa Cruz in California, spoke to Highsnobiety about the reaction to the show: “It may just be artwork to Mr Scott, to be used and thrown away by next season, but these artists and brands mean a lot to many people around the world.” Scott was later forced to stop any future plans he had for using these designs and the pieces that already existed had to be recalled.

Keith Martin has been hooked on longboarding for the past 10 years, so much so he created his own online magazine based on the industry called Thane, and he can see many reasons why the fashion world is so drawn to skate culture: “Underneath pretty much all of it is about being a little anarchic, it’s about doing your own thing and not joining bandwagons.

“Fashion is very much the opposite of that, it’s cherry-picking visual bits and pieces from cultures and trying to create something interesting from it. The fashion industry uses this but a more sanitised version in order to sell clothes [and] that’s what pisses off a lot of skaters.”

It has become easy for the fashion industry to take inspiration from different subcultures and use this in the creation of forthcoming collections, but this is evidently going to cause conflict and dislike towards the fashion world, especially as they often fail to represent subcultures in a realistic manner.

Many magazines including Vogue have published photographs of models posing with skateboards while sporting inappropriate full glam looks, even Céline’s Spring/Summer 2011 ad campaign showcased a model posing topless while flaunting a skateboard with rhinestone trucks and baby pink wheels. 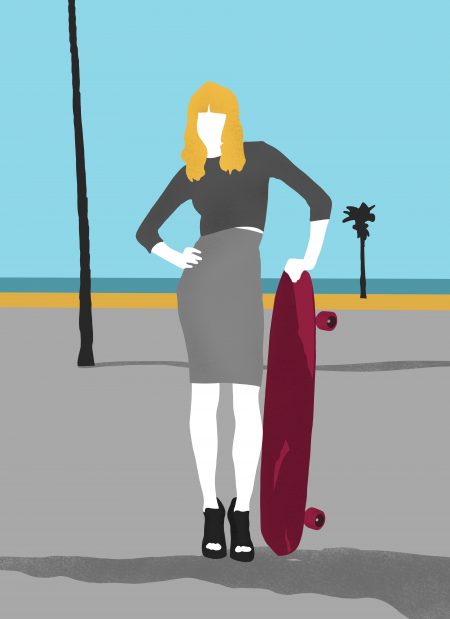 Many magazines have combined high-end fashion with skateboard culture

Besides this, the fashion industry isn’t all to blame. Back in 2000, the skatewear brand Supreme received a cease and desist letter from the leading fashion house Louis Vuitton. They had created a series of skate decks, beanies and T-shirts using the iconic Louis Vuitton monogram print.

While still trying to make a name for themselves Supreme didn’t fight back. Instead, they took the decidion to stop all production and the skate-decks which had already been showcased were all to be recalled, amid reports that the French fashion house had demanded the products be burnt to avoid them getting into the hands of collectors.

Since creating the brand in 1994, James Jebbia the founder of Supreme has made a huge stamp in the fashion industry; you could even go as far as saying the brand has changed it. It started out as a skate brand and a hang out spot for the subculture based in New York City but now has transformed into one of the biggest streetwear brands in the world.

With stores in London, New York and Japan, millions of committed fans take to the streets to queue for their latest weekly drop. The likes of Drake, Rihanna and Justin Bieber are just a few of the many celebrities who have sported the brand for years.

Fast forward seventeen years, the creative director of Louis Vuitton, Kim Jones, joined forces with Jebbia to create a collaboration between both brands. Jones told The Fashion Law: “You can’t have the conversation of New York menswear without Supreme right now, because it’s such a global phenomenon.”

It was showcased at the Palais Royal in Paris during the Fall 2017 menswear fashion week. The collaboration contained a mixture of accessories which all incorporated Supreme’s bold red and white branding.

People weren’t surprised when this left a sour taste for the fans of both brands, especially the lovers of Supreme who were disappointed in the unattainable price tag.

One anonymous buyer told Women’s Wear Daily: “They started the brand as a fuck you to fashion, and now they’ve become it.” Similarly, Dan Bishop, an avid skater, told Artefact: “The brand has very much grown out of their skating ties in the recent years, they were pretty well respected but I’m not sure anymore.”

So how can the relationship between the two industries be resolved? Perhaps the fashion industry could try and approach it differently by being more authentic and realistic with their creative visions.

“I think the big problem really stems from a lack of honesty. However, I think if a fashion brand were to approach skate culture responsibly it might not work so well for them, even though they would have a better reaction. If they did it properly and had models in helmets and shin pads it doesn’t come across as well with that visual shorthand they are looking for,” added Keith.

There does seem to be a generational problem which is slowly but surely changing. Many of the younger generations of skaters have become more open to the collaborations between both industries compared to the older generation who weren’t as accepting.

Dan started skating at the age of 14, now at the age of 26, he told me what attracted him to the skate world in the first place: “At the time it was considered an ‘extreme sport’ which as a young kid was very cool. Also, I played a lot of Tony Hawk video games and I loved the music associated with the skate scene back then.”

When asking him why he thinks skaters dislike the fashion industry so much, he told us: “Personally I’ve come to enjoy the fashion industry much more than I used to so it really doesn’t both me when the two partner together. I think the problem is that the older generation see it as not a very ‘skater’ thing to care about.

“Through sports history, it’s been known as a very punk thing to be a part of, and to be punk is very anti-fashion. Skaters can be stubborn and want skating to stay innocent to change just like it was back in the late ’90s and early 2000s, but that’s just not what it is anymore.”

Now that newer generations are becoming more inclined to the fashion industry, there may be a shift in skaters’ attitudes. But the fashion industry needs to take responsibility and stick to being transparent with the inspiration they gain from skate culture.

It can only be hoped that this will establish a more understanding and respectful relationship amongst them while producing content and clothing all can appreciate.

All Images courtesy of Luke Blatchford.