Some time in the late 1980s, Eric Seltzer appeared on television. For a twenty-something with dreams of broadway stardom, it was a breakthrough of sorts; certainly a departure from serving baked Blue Point clams to made men in New York’s Little Italy.

Nobody can be sure how many people saw Seltzer’s first TV appearance or even exactly when it was shown, but one thing is certain, he was in his underwear.

In the 1970s, New York City made an agreement with several cable television providers, granting them permission to lay physical cable under the streets of the city’s boroughs to improve broadcast quality.

The city added a stipulation to the deal; a number of channels were to be dedicated entirely to public use. Time on these channels was to be offered free of charge, almost totally uncensored, on a first-come, first-served, non-discriminatory basis. In other words, anybody could get on TV, all you needed was a video camera and an idea.

What followed was a video free-for-all. The platform created space for a new breed of often experimental programming that pushed the boundaries of television in an unprecedented manner.

“It was something that wasn’t mainstream, which was part of its appeal,” Seltzer says of the unorthodox platform upon which The Eric in his Underwear Show made its debut. “You basically had an audience of insomniacs and stoners. At that time, that was my target audience.”

For the budding actor, comedian or host, public access was a golden opportunity to bypass the entertainment industry’s gatekeepers and get seen. People from all walks of life could make themselves heard and seek out fame, without concern for budgets, executives or professional connections. In Seltzer’s case, his scantily clad skit would make up part of a sketch show called The No Budget Comedy Show that came together amongst friends.

Seltzer’s underwear-toting character would prove popular with producers at Comedy Central, then a fledgling channel desperate for content. After cameraman Mike Posner sent in a tape of the sketch show, the network flew comedian Fred Willard to New York for an interview with ‘Eric’. Seltzer left the host bemused with an impression of The Godfather’s Don Corleone eating a hot dog, performed sans underwear, in the middle of Times Square.

“My friend Jonathan convinced me that I had to do something outside the box to get noticed, after which he quipped, ‘after you get noticed, then you can put your pants back on’,” Seltzer recalls. He was eventually able to get dressed, going on to play roles in The Sopranos and The Devil Wears Prada.

Not everyone who appeared on public access can boast such success. Much of the platform’s programming is now lost to time, or lives on only through scattered YouTube clips. But with a dedicated cult following, the borough’s three channels had their own stars; self-made media personalities not unlike the YouTubers of today, albeit without the sponsorship and with a far more local fanbase.

A number of the colourful cast of characters who appeared on access cable in the 70s and 80s would go on to become New York icons and contribute, in some small way, to making the city one of the world’s cultural capitals. 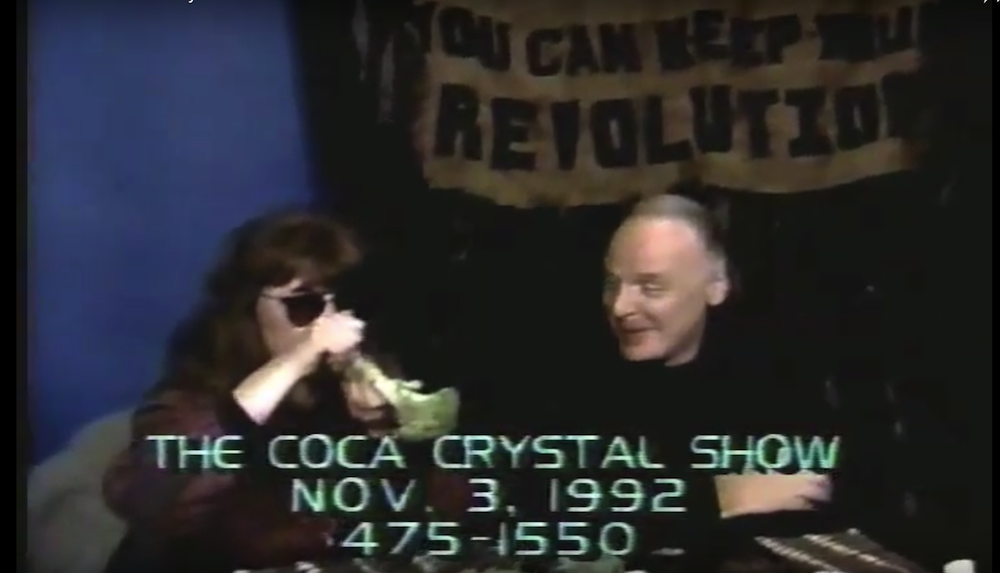 Within the limits of the law, cable companies were largely powerless to control what content appeared on public access channels. Here, Coca Crystal smokes a joint through a hollowed-out broccoli on If I Can’t Dance You Can Keep Your Revolution [YouTube]

‘Slumgoddess’ and political provocateur Coca Crystal opened every episode of her variety show,The Coca Crystal Show: If I Can’t Dance, You Can Keep Your Revolution, by lighting up a joint before launching into an hour of content rooted in current affairs and activism, as well as music, phone-ins and what the New York Times described in her obituary as: “spontaneous nonsense.”

Crystal emerged as an irreplaceable figure of the city’s countercultural scene. Her life would eventually be immortalised in a stage play, testament to the impact her show had amongst a small but impassioned local community in spite of the technical chaos that tended to unfurl every week.

“This is not a test. This is an actual show,” said writer Glenn O’Brien in the opening of an episode of the long-running programme TV Party. O’Brien was drawn to the public access having appeared as a guest on The Coca Crystal Show, putting his own spin on the television format with a live and largely unfiltered window into the underground New York scene of the time.

Once a member of Andy Warhol’s ‘Factory’ studio, O’Brien hosted the likes of Debbie Harry, Jean-Michel Basquiat and Iggy Pop on the air, using a talk show format to bring together some of the city’s most electric art and music personalities.

TV Party captured the spirit of Manhattan and the East Village with an intimate, chaotic hour with some of New York’s biggest characters of the era, at a time long before the age of instant online celebrity gossip. 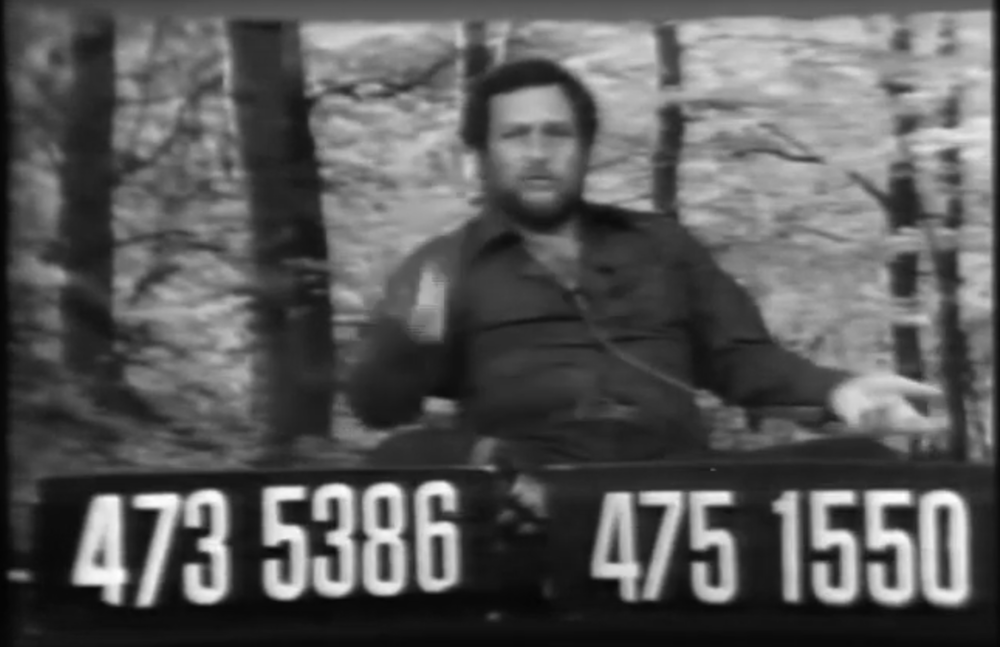 Audience interactivity was a popular approach to hosting on access cable. Steve Gruberg’s The Grube Tube took a simple yet captivating format; a man sits in a room with a phone number on screen and answers calls, live.

What followed was a display of New York at its most unfiltered. Gruberg would fend off everything from shocking racist abuse to cringeworthy jokes and on-air serenades from the late night audience, eager for their five minutes; or, should Gruberg cut them short with the simple press of a button, five seconds of fame. It was, in retrospect, like a proto-YouTube comments section; utterly unrestrained, anonymous and exposing.

The nature of public access makes success a difficult thing to gauge. If any metric is to be examined, it would be the longevity of certain shows despite being thoroughly amateur productions. In Gruberg’s case, 35 years on the air would evoke jealousy in the most seasoned of network showrunners.

Perhaps even more envy-inducing is the prospect of a lasting cultural impact to match. Despite its thoroughly amateur production, Concrete TV managed just that. The show took the form of a chaotic video art piece, featuring erratically collected clips of everything from fitness videos and fetish pornography to pro-wrestling violence and low-budget horror films. all set to a thunderous hard rock soundtrack and with a seemingly total disregard for any copyright law.

Only in September 2019 did the show come to an end after 28 years on Manhattan’s channel 67, where it filled the 1:30am slot every Friday night.

The show’s creator, ‘Concrete’ Ron Rocheleau, is hailed as the father of video collage. The format would be appropriated by MTV throughout the 90s. Right up until the very end, Rocheleau championed traditional editing techniques, relying solely on cutting up VHS video. Embracing the anarchic medium and all of its visual quirks would contribute to making it a cult favourite with a lasting aesthetic influence. 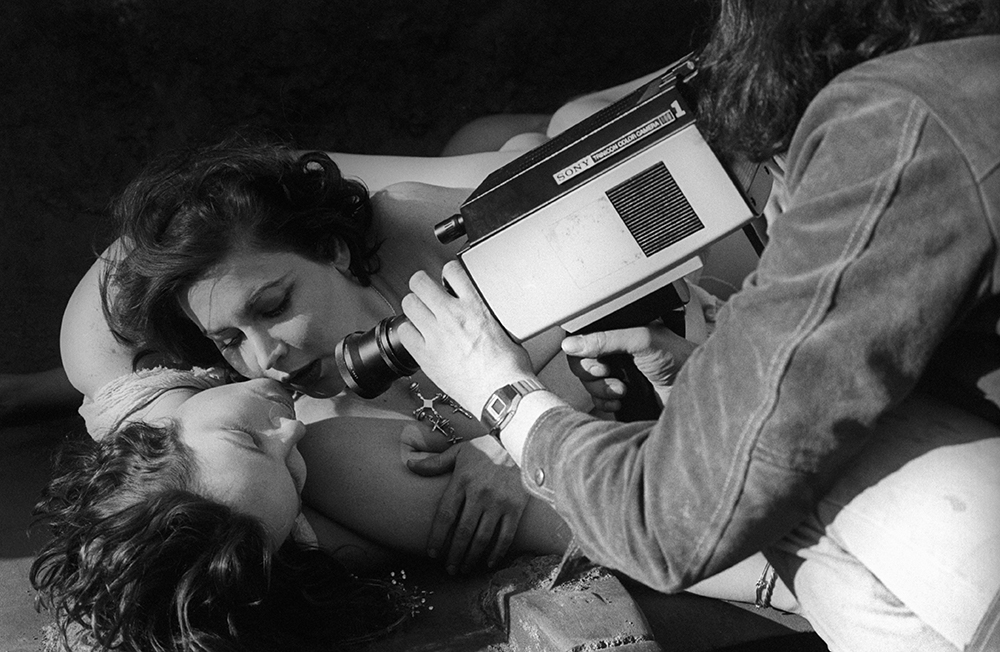 Behind the scenes on an episode of Midnight Blue. After producing around 13 episodes in black and white, Alex Bennett convinced Al Goldstein to invest in colour video equipment, a decision which proved lucrative [Annie Rhinestone/Alex Bennett]

Public access was a pioneer in the field of community-driven entertainment, but its long-term impact goes far beyond influencing who can create the media we consume.

The programme served as both a champion for the sexual revolution of the 70s and a showcase of Times Square’s then sleazy geography. Its creator, the pornographer Al Goldstein, had made a name for himself publishing Screw magazine; a tabloid filled with hardcore pornographic spreads and reviews of adult films, peep shows and escorts. 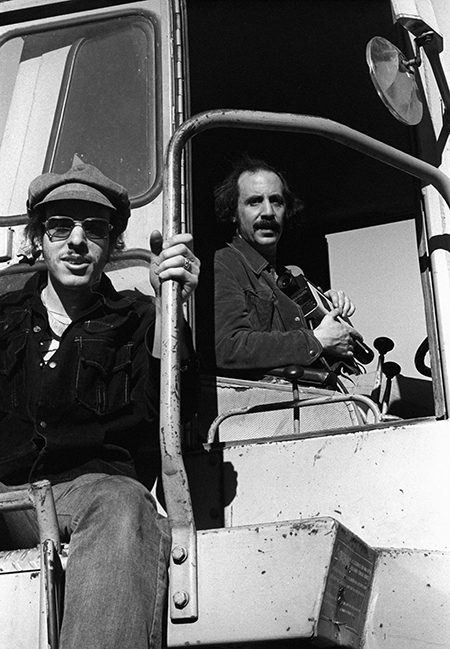 Public access provided a lucrative opportunity for Goldstein to expand his Screw empire; by law, the cable company could not refuse to air his programme. Initially launching as a video counterpart to the magazine titled Screw Magazine of the Air, the thrice-weekly series would soon reinvent itself when radio broadcaster Alex Bennett became involved in the project as a producer.

“Screw magazine had pictures of blow jobs and women getting screwed. We couldn’t do that on cable, they wouldn’t let us! We had to create our own reason for existence, in other words our own identity,” said Bennett of his motivation for bringing a new direction to the show. Midnight Blue was its own animal, as was cable, so an entirely different approach was necessary.

Midnight Blue would become noteworthy for its innovation in more than just presentation. A provocateur, Goldstein had already established himself as an unlikely champion of free speech and the first amendment, fighting and often winning costly legal battles to defend his right to print whatever he pleased.

Bennett furthered these efforts on public access, unashamedly focusing on the ‘scandalous’ sexual issues that were very much front and centre of the growing cultural changes of the day.

“If certain eras were defined by what the revolution was, the revolution at that time was a sexual revolution,” he explained. “Not that it was everybody running around having wanton sex, but the issues were all sexual. Whether it was gay rights or women’s liberation, they were all kind of sexual issues. We were simply dealing with the issues of the time that no-one else was dealing with!”

But this rebellious attitude did not sit well with the cable companies. Bennett speaks of particular ‘altercations’ with the TV giants, who, at a time when the show was the most popular item on public access, went to great lengths to try to censor its content. 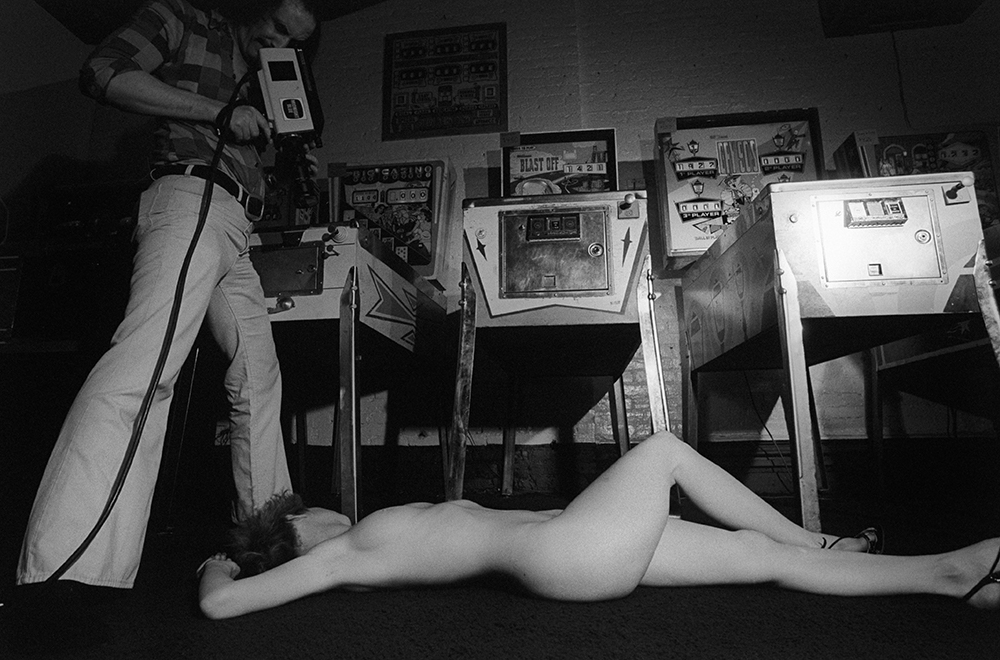 Alex Bennett shooting a ‘video centrefold’. The show’s almost avant-garde approach to soft-core erotica flaunted the rules of what was allowed on television in the 70s [Annie Rhinestone/Alex Bennett]

“I had [pornographic actress] Marilyn Chambers on doing a dance with a guy who was naked. They said we can’t put that on the air because his penis [was] bobbing up and down. I said ‘so are her tits, but you’re not complaining about that, right?’ and they said ‘right’. So I said this was a sexism issue. They let us put the thing on the air.”

Bennett still takes pride in the impact the show had in not only influencing the conversation and portrayal of sex on the screen, but by opening the door to change across the wider media world. What were once taboo but very real subjects are now commonplace in our news and entertainment, in part thanks to unlikely pioneers such as Bennett.

“One day this guy from NBC came up to me, a reporter, and he said ‘you’re Alex Bennett. I know you from the radio, but I also know you from Midnight Blue’. He told me ‘I want to thank you, for opening up what we can do. You’ve made it easier for us to cover stuff that we weren’t able to cover before’. So I thought ‘I’ve done my job!’”

Bennett still works as a broadcaster to this day. His talk show GABNet streams live on YouTube, a platform that Midnight Blue and its access cable cohorts unwittingly paved the way for back in the mid 70s.

While the freedom to publish is one perhaps taken for granted in the social media-dominated 21st century, the importance of online video sharing’s humble, characterful predecessor cannot be understated.

“There were these flashes of brilliance. It gave everyone this ability to be seen. It was kind of like the internet is today. Anybody can go on YouTube. Anybody could go on Manhattan cable,” Bennett fondly recounts.

“There was a lot of really interesting stuff being done. I look upon it as a very important experiment.”