Rich with bold, pastel colours, layered with contrasting textures and detailed ethereal aesthetics – for a second you may think you are staring into the dream of an early twentieth-century avant-garde artist, or perhaps the work of Salvador Dali had he been alive today.

Although the shift towards digital seems to have taken over the world of art, Australian artist, Karen Lynch, is proving that incorporating movements of previous eras, as well as techniques one may now deem traditional in our modern world, can produce striking new works of art.

Formerly the owner of a horticultural business, Karen discovered her love for art and decided to go professional as Leaf and Petal Design in 2014. “From practice, consistent hard work, and trying to create a decent portfolio. I started as a hobbyist and now work as a self-employed full-time artist,” she states. 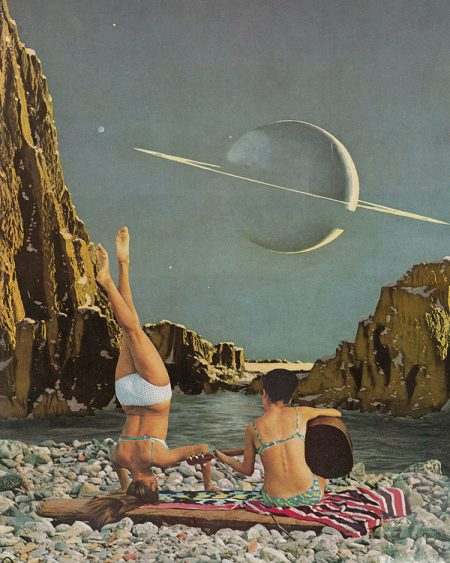 The term ‘collage’ dates back to the early 19th century, derived from the French terms ‘papiers colles’ or ‘decoupage’ – used to describe the term of pasting paper cut-outs onto different surfaces. The term was invented by cubist artists George Braque and Pablo Picasso, who although famous for their paintings, have also experimented with collages.

Karen’s work follows a clear surrealist style, often featuring images of space, miniature worlds and exaggerated fantasy landscapes: “I’m not fascinated with space and fantasy, but magazines from the 1950’s and 1960’s definitely were. You can see rockets, astronauts and planets in anything from children’s books to advertising from that era, so it’s really inherent in the material sources.”

She recalls the first time she experimented with art and created her first collage: “In 2013, I made a collage using images from a 1950s sewing pattern catalogue and sewing pattern instructions cut into triangles to form a geometric base and glued them on to a canvas.”

“First it was just a creative outlet for me,” she continues. “Then after being offered opportunities in the music industry and other commercial commissions, I branched out to doing both personal and commercial designs.”

Karen has exhibited her work in France, Italy, Norway, Canada and Australia. She has since collaborated with various commercial clients, such as Coach and Mercedes Benz Australia, and created album art projects for Sony Music Australia, Universal Music, and various independent record labels.

In 2016, the artwork provided for Australian musician Bernard Fanning’s two-part album Civil Dusk, was nominated for Best Cover Art during the ARIA awards.

Karen explains how commissioning album art for musicians differs to her usual collages: “You are creating something that represents someone’s music, so you have to work closely with them so their ideas, meaning behind lyrics or the vibe of the music is portrayed in an interesting way.

“Even though I’ve done a few 100% analogue ones in the past, they really need to be digital for the revision process that inevitably comes with working with a team of people, especially if it’s for a record label.” 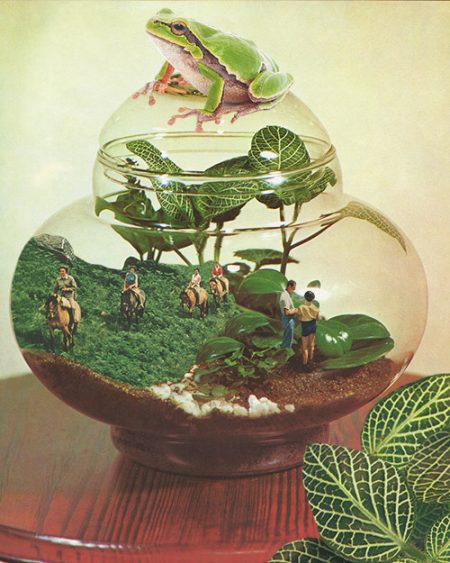 Karen’s use of colour makes for vibrant paintings which are quick to grab many people’s attention. Every painting has a unique colour-way, ranging from a soft pink sunset to a warm blue ocean.

“I love how colour conveys emotion and affects people. I wish I could say I’m an expert at colour theory but sadly I have no clue as far as the technical side of it works. So, it really is very instinctive, and learning through experience [and] experimenting.”

Not only is she making a statement highlighting the effectiveness of hand-crafted art, but she is also reducing our societies impact on the environment due to waste. Her art philosophy centres on “the idea of resuscitating and transforming long-forgotten pieces of the past into colourful, surreal, retro-futuristic landscapes.”

In a world where we have instant access to visual material and the capacity, through widely accessible computer software, to design whatever we can conceive of, many would consider it to be time-consuming and a struggle searching for recourses to create collages. Karen agrees and claims that this is the most crucial part in the collage process: “The hunt for source material can be both the most exciting and most frustrating part of my work.” 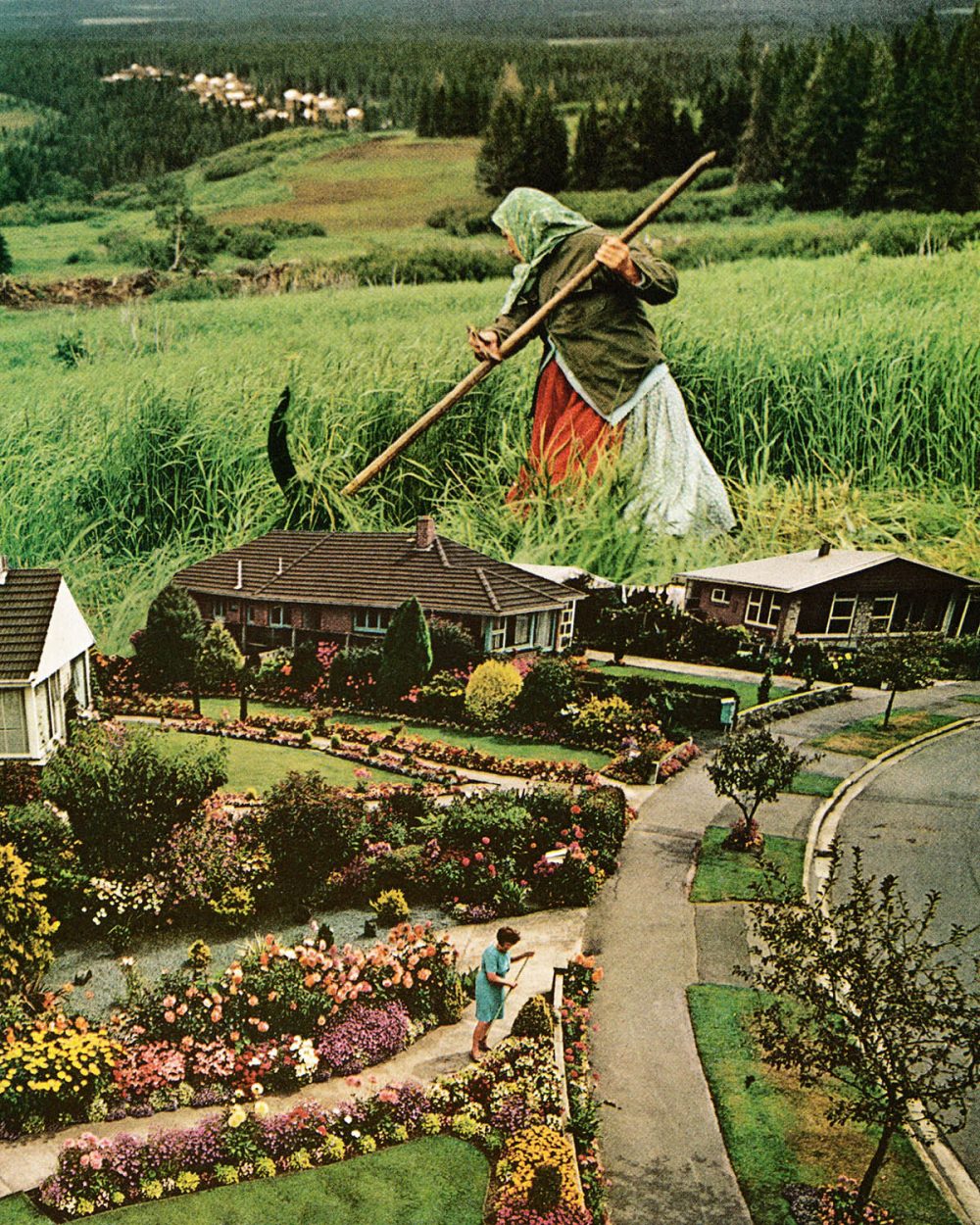 The struggle to find resources has led Karen to look in unusual and original places: “I’m fortunate that I live in a dry city, with little humidity, so there is a lot of well-preserved vintage magazines available. I find material at second-hand stores, thrift shops, garage sales, car boot sales, eBay, Facebook marketplace, anywhere really. I also use stock images and my own photos.”

She gave us a brief insight into the process of creating her collages: “It usually starts with one key image, maybe a person, building or a colour palette and everything gets built around that. Then it’s a matter of trial and error, mixing and matching elements, trying different combinations to see what fits or provides a contrast.” 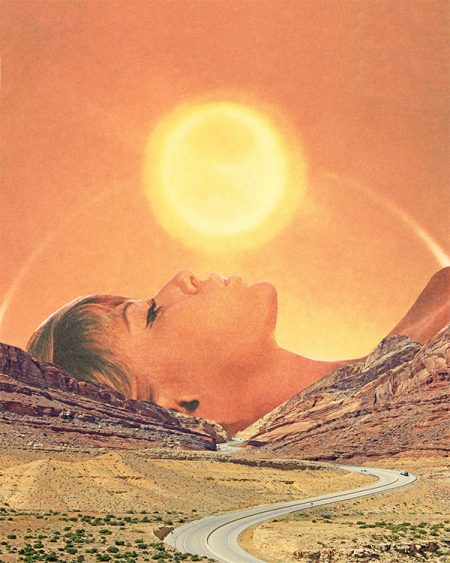 The process often involves scanning the images into Photoshop, she explains this is what allows her to: “Adjust the brightness and contrast which is often lost in the conversion process or I might fix a torn or creased image.”

When questioned on the meaning behind the art she creates, Karen stated: “It’s purely about aesthetics. It’s material-driven, so it’s all about the source material and what I can create from that. I’m a feminist and I am concerned about issues such as gender equality and LGBTQI rights, but I don’t think they are themes that come through in my work at all.”

The captivating landscapes of Australia are the source of inspiration for Karen’s artwork. “I live and grew up in South Australia, which is for the most part flat, so it’s definitely ‘big sky country.’ I also grew up near the purple mountains of the Flinders Ranges and a pink Salt Lake, so they often feature in my images,” she says.

“I now live by the beach, which faces west so we have perfect sunsets, and I use photos of them in my work,” she continues.

Karen tells us she uses various methods to price her work. “For originals, by comparing what others are asking or on gallery curator’s advice. Fee’s for commissions are based on my past experience, asking other artists, and the expected turnaround and difficulty of the project.”

In the future, she hopes to campaign for Gucci or [create] an album cover for Lady Gaga: “I’m open to collaboration with clothing brands. Fashion can often be art and it’s all about design and creativity.” 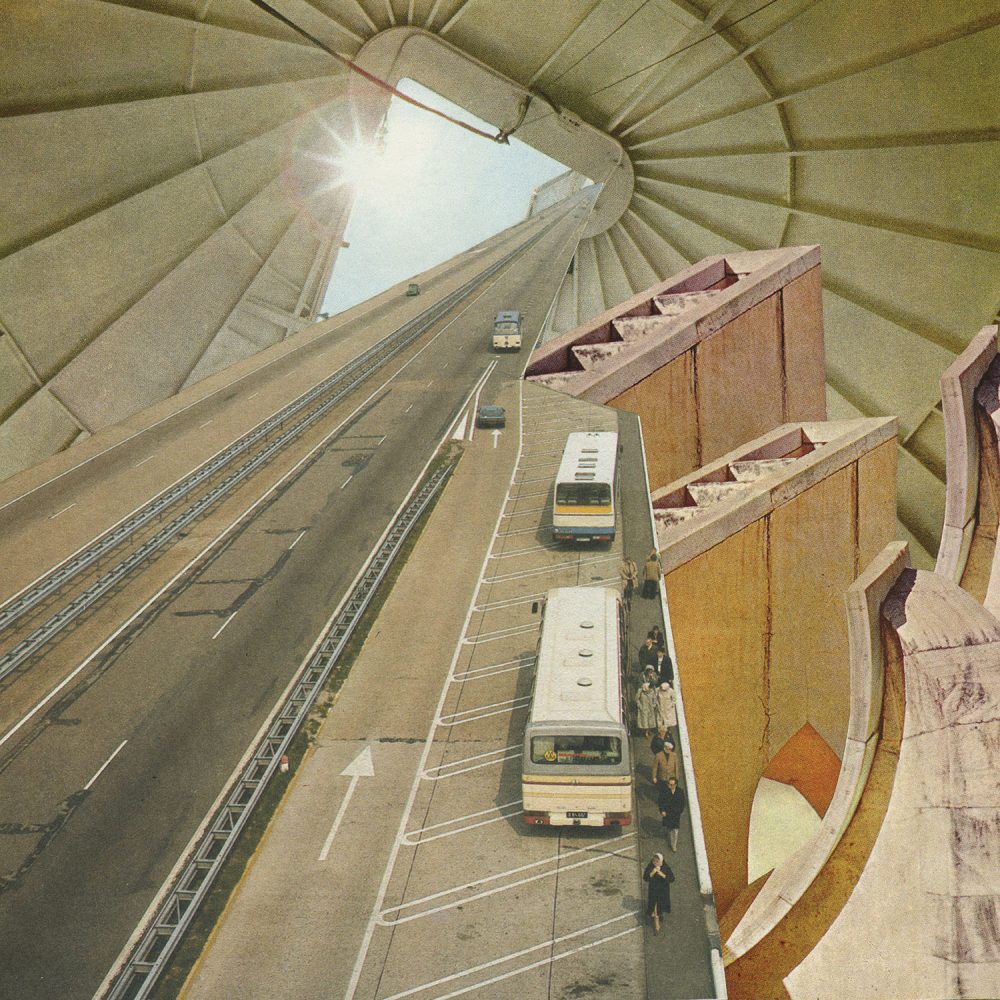 Karen’s artwork is available on many social platforms, including Instagram, where she has 116,000 followers, but also Facebook and society6.

She believes it is important to stay up to date with modern technology: “Art is more accessible and affordable than ever. Instagram, virtual shows and online galleries, and people’s fascination with everything visual makes it an exciting time to be creating.”