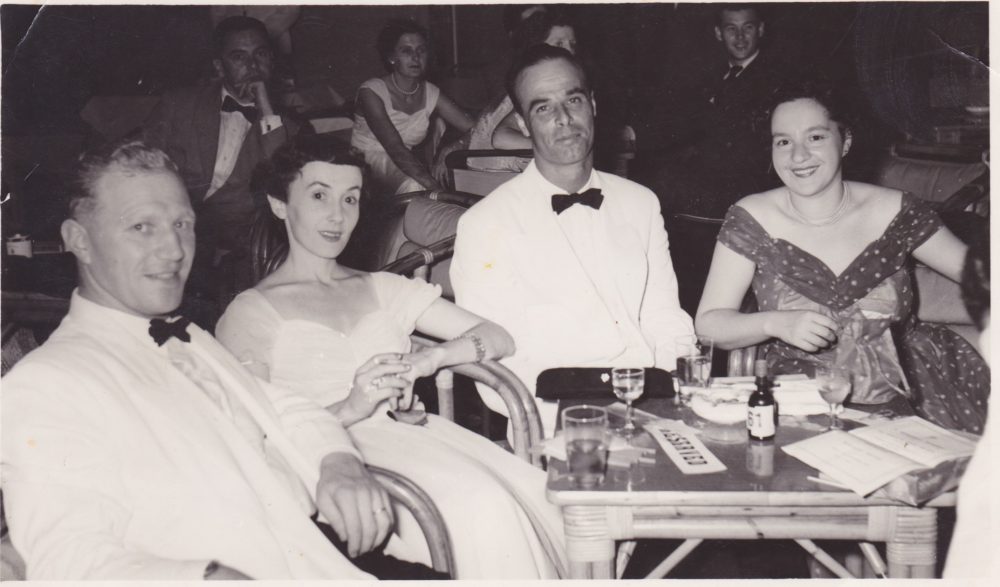 What does it mean to be the grandchild of an immigrant? My grandmother moved her life from the rolling hills of Emilia-Romagna, to Essex, the overwhelming majority of her life being spent in the UK. My grandfather, born in India, intrigues me more.

Would he have considered himself an immigrant to the country of which he was legally already a citizen, despite never setting foot there before the second World War? It is a question I may never know the answer to. He died in 1980, 13 years before I was born, and so any answers are now lost to time.

Throughout my life I have felt a deep connection to my Italian heritage, my childhood spent making dishes such as ciambella and garganelli alongside my Nonna (grandmother). Had my grandfather still been living during my lifetime, I feel certain that I would have understood the Anglo-Indian culture far more than I do now.

Without doubt, I am culturally different than a native Italian or Anglo-Indian, I was raised by English parents, so can I truly say that the homelands and cultures of my grandparents continues to influence me now?

In modern society, much is made of the importance of retaining the culture and heritage of family by first- and second-generation immigrants, but what of the grandchildren of immigrants?

Born in 1920 in Cochin, India to a French mother and Anglo-Indian father, Herbert William Janes was my paternal grandfather. He survived the evacuation at Dunkirk as a 19-year-old Royal Engineer, being carried to safety aboard a Royal Navy destroyer, and would spend the next five years of his life fighting for the freedom of Europe against the grip of Nazism.

The war took him across the deserts of North Africa, including the famous British victory at El-Alamein, to the bullet-scarred hillsides of Southern Italy, where he fought as part of the Allied offensive, pushing north toward the Alps. 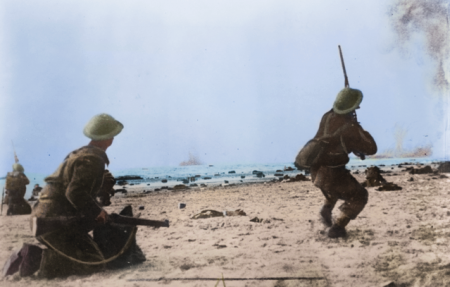 The Dunkirk evacuation in 1940 was a crucial moment in the early period of the Second World War. Here, British soldiers are under fire from a Stuka diver bomber on Dunkirk beach.[Cassowary Colourizations].

He had never set foot on English soil before the outbreak of war in 1939, yet soon found himself thrust into the deadliest conflict in human history. What would I have asked him of the war had he still been alive?

Most certainly of the tales told to me by my father: of Valentine tank armour so hot in the African desert that it could cook eggs, or building bridges, fortifications and roadways whilst under heavy machine gun fire, and almost certainly about the screaming sirens of Stuka dive bombers above the beaches of Dunkirk.

My paternal grandmother, Giovanna Maddalena Zaganelli was born in 1925 in Lugo, Italy. One of two children, she grew up in Mussolini’s fascist Italy, witnessing the war from its beginning to end in her home town, surviving German retaliations against Italian partisans, bombing raids and life on the frontline during the Allied advance into Northern Italy in 1944.

The same year, her younger brother Francesco vanished whilst travelling by train nearby. He would not return until after the war, having been sent to Blechhammer, a satellite camp of Auschwitz, where he witnessed the liquidation of the Jewish prisoners and allied bombings before the camp was liberated by Soviet forces.

As the Allied armies advanced north, and the frontline came to Lugo, she left with her mother to seek refuge in a farmhouse. In the build-up to the final spring offensives of 1945, German troops occupied the farmhouse, using the building as an operational base.

During the occupation, she developed tuberculosis, and had it not been for the swift action of a German military doctor, she would likely have died. The end of the war brought peace, and by chance, my grandparents met on a beach in Venice in 1945; within two years they were married, and eventually settled in the UK several years later. 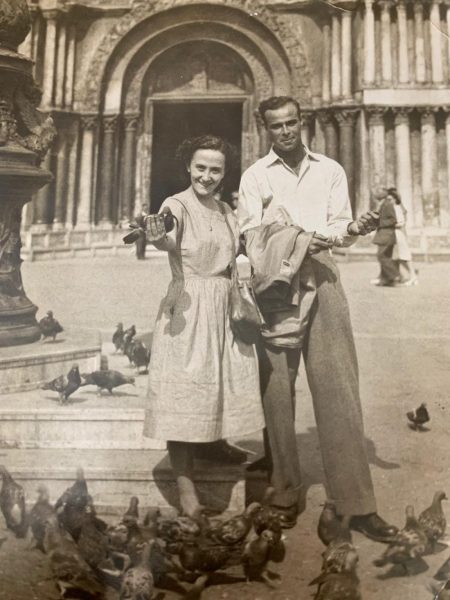 My grandparents in Venice, the city in which they met in 1945. Their story is one of many to come out of the devastation of the Second World War [George Janes]

There were times in his life that my grandfather faced slight discrimination – his heavy Anglo-Indian accent and dark complexion made him stand out in post-war Britain, despite his English ancestry. My uncle also encountered schoolyard comments regarding his parents, with the notion of his father having been born in India seeming impossible.

He recalled a discussion about ethnicity at school. “I said my father was born in Cochin, India, and my mother was born in Italy. One of the kids in the class laughed and asked, ‘How could that be?!’ Afterward I thought, that’s a bit strange, and got self-conscious.”

My pride for my Italian heritage was often ridiculed during childhood, because outwardly, I hold no stereotypical Italian or ‘Mediterranean’ features, being light skinned and freckly as a child – even being nicknamed ‘The English Rose’ by my grandmother’s friends. But why should be perceived as being odd whilst I celebrate and uphold my cultural and ethnic background?

I spoke with several friends whose grandparents were immigrants in an effort to gauge other thoughts on the subject. Nathan is the grandson of Irish and Maltese immigrants, both sides of his family line being influenced by immigration. “I feel massively connected to the culture of my grandparents,” he tells me.

“In many ways I feel the way they raised me, in line with the way they were raised, brings me closer to parts of Irish or Maltese culture than I feel to that of the UK’s. Obviously, there are countless elements that I’ve picked up from my own parents/life, and from having never lived in the countries of my grandparents that would probably have me appear as a total alien should I ever live in Ireland/Malta, but I definitely feel connected to the cultures of both.”

“Holding onto these gifts that make me who I am, is central”

His thoughts indeed echo mine, I feel a sense of immediacy regarding my Italian heritage, especially since the passing of my grandmother, but also a deep understanding that the culture can never truly be mine.

This sense of dilution and separation can be found across online forums and web pages, in which people discuss their thoughts on being the grandchild of an immigrant. “Why would I move there? I have no connection other than my name,” writes one, “I love her country – I wouldn’t leave it for nothing,” writes another.

Clearly, the thoughts and feelings of individuals are just that – individual. The subject does not appear in mainstream media, more focus placed on first-generation and second-generation immigrants, on-going issues such as the European refugee crisis taking centre stage in the depiction of modern-day immigration.

An Australian friend also has Italian ancestry. When I ask him whether he feels connected to his grandparents’ native country he responds almost overwhelmingly ‘yes’: “I feel connected, probably because my father is, and I still have my Nonna (grandmother) in my life. I have also spent time in Italy and have attempted to learn the language before.”

Language is critical in our retention of friends, traditions, and beliefs, often being the first steps in an individual’s journey into a new culture. My own grandmother spent many hours (largely unsuccessfully!) teaching me the Italian language during my childhood, and we often spoke together in what broken Italian I could retain.

The loss of an immediate connection creates a very real and very tangible separation within a family – over time people fade from each other’s lives, especially when distance, language and culture are heavily involved.

With this, for me, comes a sense of duty. I am honour bound to continue my grandparent’s legacy, and ensure that my own family retains the history, stories, and traditions that define us.

Guilt is present, the nagging feeling that I should have asked more. “Keeping my ties to Ireland and Malta alive has always been of huge importance to me,” Nathan says, echoing my sentiment. “Holding on to these gifts that make me who I am and will hopefully one day go on to impact my family, is central.” 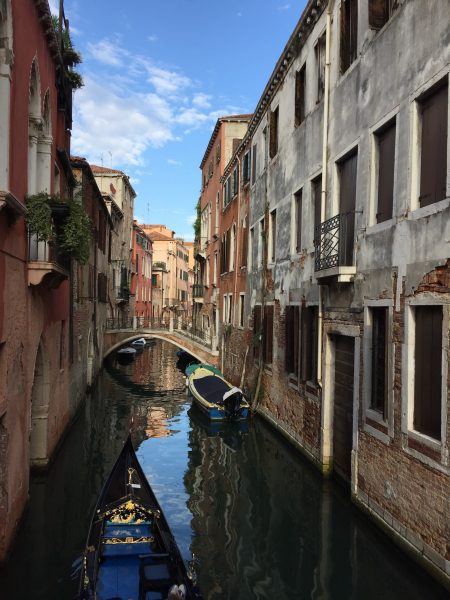 The city of Venice holds significance for me and my family. Immigration and citizenship have been controversial topics in Italian politics in recent years [George Janes]

Looking inwardly at what defines my own personal identity has brought both resolve and uncertainty. Identity has become more politicised than ever, especially in a world in which immigration is hotly debated daily. In Italy, winner of last years Sanremo music festival, Alessandro Mahmoud, has faced controversy, as by many traditional and right-wing publications, he is seen as un-Italian.

Mahmoud was born to an Italian mother and an Egyptian father, but despite his citizenship and clear immediate family history, his cultural differences set to mark him out as a target amongst a minority of Italian society.

Who can truly define what ‘makes’ someone a member of a defined culture, or nationality? I feel connected with my Italian heritage, but that does not make me Italian by itself, despite my birthright to citizenship. Whilst Mahmoud has clear connections with Italian culture, society, and citizenship, he is also outed as un-Italian by many in Italy, granted that is, by right-wing politicians and social commentators. Is it not enough to feel connected? To engage in the traditions, the language, the history, arts and culture?

My grandfather faced racial discrimination because at a glance, he did not look ‘English’, with a heavy accent and dark complexion. He had fought through the war for Britain, yet was perceived to be different.

No doubt many others faced the same. Post-war Britain was heavily influenced by mass immigration – indeed, without it, Britain’s shattered cities and the economy would have struggled to recover following wartime devastation.

Many often neglect looking back into their past, to discover where their families came from, and why their ancestors’ lives led them where they did. With a society screaming ‘us and them,’ to take a break from shouting into the void and reflecting on themselves, many would find their own family trees rich with stories of war-torn communities, tragedy, joy, adventure and immigration.

“I love her country – I wouldn’t leave it for nothing”

As Rebecca Morrison writes for PRI: “When the results of my DNA cheek swab came back, my family tree got a lot bigger. The Kurds, Syrians, Israelis and Palestinians, were suddenly more cousins. The world news hurts a bit more when I think of them in those terms.”

People are different. Beliefs, traditions, language, religion and culture are all what define us, but ultimately, we are all human. It is important to know where we are from, but equally to know where we are, who is around us, and how we all, as a collective, can continue our own cultural traditions alongside one another, in an embracing and welcoming society.

The concept of ‘third-generation immigrants’ is yet to truly exist, and I do not believe it ever will. Certainly, I do not consider myself to fall under that category – my parents’ traditions and my own personal experiences distinguish me from my grandparent’s generation, I am entirely rooted in British society and culture, from my earliest childhood memories.

What I do have are the things which have been passed down to me; the language, food, cultural traditions and family history.

Perhaps Nathan sums up my thoughts best when he says: “We still cook like my grandparents did, we still celebrate what they did, and frankly I am passionate and proud of my heritage and do everything I can to hold on to it as the third generation.”