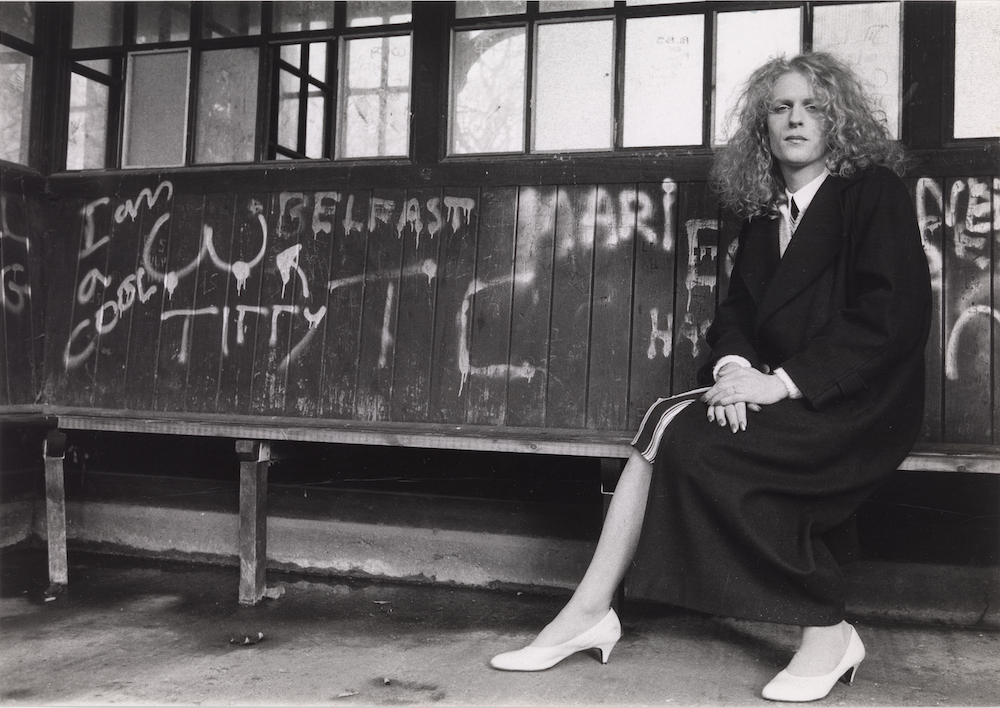 The exhibition, based at the Holburne Museum in Bath, is a showcase of 80 ceramic pieces from the early 80s to the mid-90s: the years Perry spent laying the foundations of his career, before gaining notoriety for becoming the first potter to be awarded the Turner Prize in 2003.

The show is opening after a public appeal was put out by the Holburne and Perry in 2018 for any ceramics or accompanying work dated between 1981 and 1994. The call out received more than 150 responses and dredged up works Perry had not seen since taking them out of the kiln many years earlier. 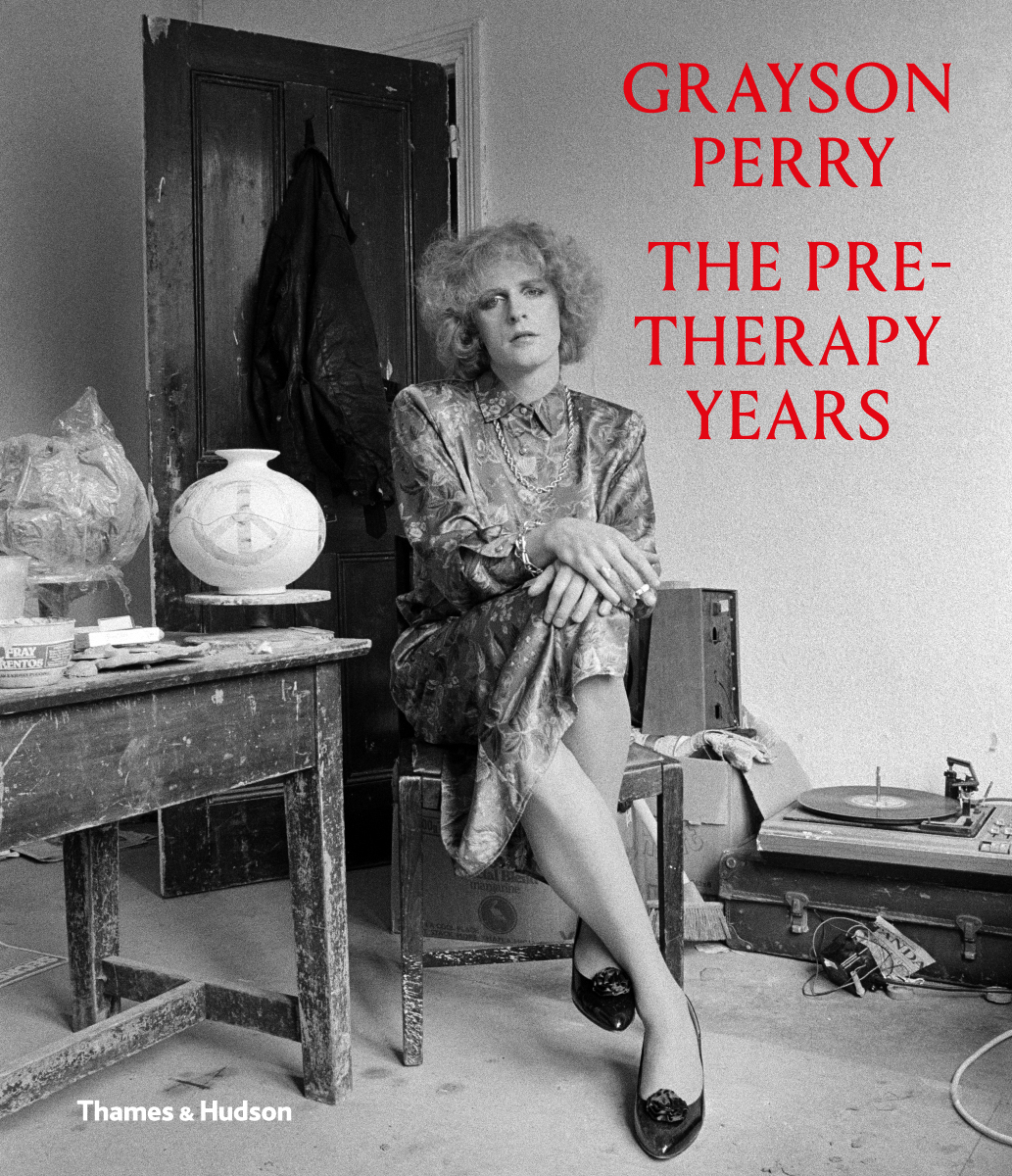 A number of the pieces, which are now on loan to the gallery from generous collectors, were thought to have either been donated to charity by Perry’s wife, Philippa, or treated with similar neglect by the artist himself, who either sold them for a pittance or gave them away.

With the Holburne being a historic museum – both in its architecture and content – its Director Chris Stephens, told us that it seemed like a natural step for the gallery to host this exhibition which takes a historical view of a contemporary artist.

“The show is part of a bigger move to make the Holburne more exciting and more dynamic, both in what we show but also in the tone of voice and the style of the museum.”

The exhibition, which will run until May 25, before travelling to York (York Art Gallery, June 12 to September 20) and then Norwich (Sainsbury Centre, October 2020 to February 2021), is the biggest selection ever shown of Perry’s early work and arguably presents him at his rawest and most unfiltered.

The show begins in 1981, whilst Perry is still at art school and full of early 20s angst. It continues with pieces from up until 1994, the year that he transitioned from “fringe” art galleries in London to exhibiting at the sought after D’Offay showroom, just off Bond Street.

When reviewing the proposed dates with the Holburne team, it was Perry himself who described these as his “pre-therapy” years, as in 1998 he embarked on six years of psychotherapy, culminating in his Turner Prize win.

At the opening of the long-awaited show, Perry – dressed up as none other than his alter ego Claire in her best pottery teacher look – told us: “I walked into the show yesterday for the first time and I was quite moved from that sudden full-on encounter with my earlier self.

“The person that made all of the work in this show was a lot angrier and more fucked up and very obsessed with kinky sex.” 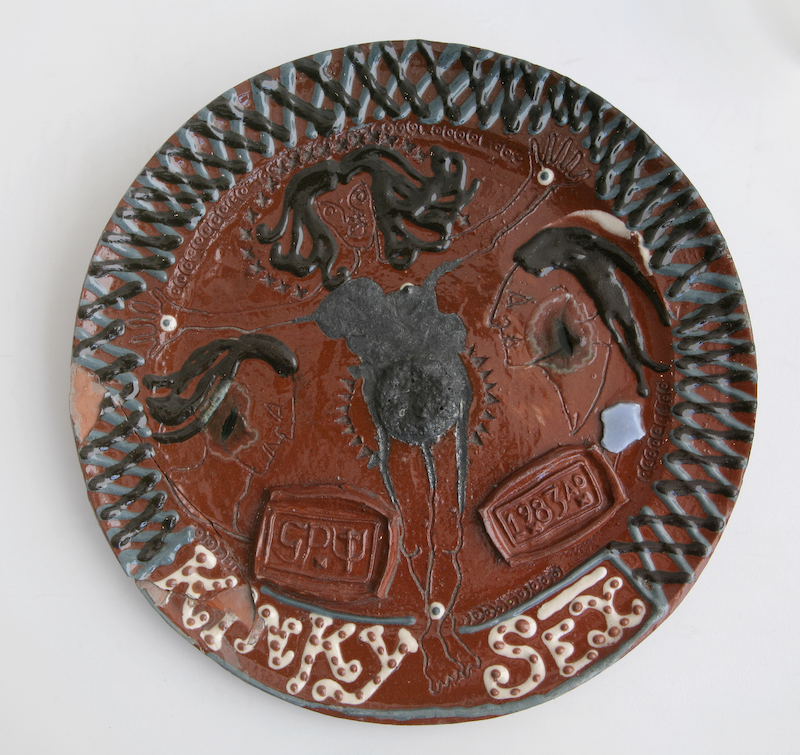 The subject matter of the show is dark, absurd and honest: the kind of topics you’d discuss in a challenging counselling session. In fact, it is arguable that these were his therapy years as it is evident that he uses his art as a coping mechanism. Chris Stephens agrees and suggests that the exhibition is a great reflection of Perry “working things out”.

From his childhood trauma, growing up in Essex and his affinity with witchcraft, to his first explorations of sexuality, transvestism and his ability to fetishise just about anything, Perry’s earliest pots, plates and figurines leave little to the imagination and provide a graphic reflection of the complicated layers of his psyche.

Best known for his ceramic work, Perry has taken the pot – a seemingly mundane piece of mantlepiece furniture – and turned it into a vessel for wider commentary and wit, but getting to this point wasn’t as straightforward as it looks.

Taking us back to beginnings of his career – where he attended evening pottery classes – Perry became conscious that if he didn’t use imagery that would counter the history of ceramics, he would turn out like any other potter; something he was desperately trying to avoid. Instead, he made the decision to purposefully display subversive motifs of violence and sex (amongst other equally inappropriate icons) as a “reaction against the friendliness of pottery.”

Perry explained that in the 80s, he believed pottery was seen as a “second class activity” and so decided to put the emphasis on the portrayal of his identity in the work, rather than in the actual craft.

Not wanting to be labelled a potter at this point, he admits that during his classes, he would refuse to sit at a potter’s wheel as he deemed them “talismanic” – something he still won’t do to this day. 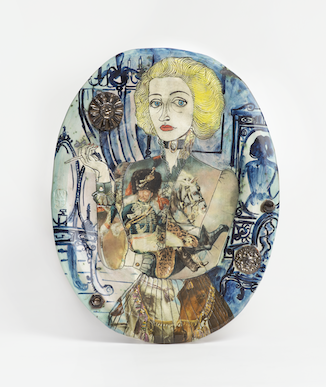 Claire as a Soldier, 1987 [© Grayson Perry. Image courtesy the artist and Victoria Miro]

One plate that stands out in the collection is Claire As a Soldier; the name in itself presents a paradox and this is matched with the visual – carved lines that make up Claire’s hair contrasted with a photo-realist painting of a soldier adorning her coat – create a style that is distinct from the rest. It’s a piece Perry described as “pretty sophisticated” when it was pointed out to him.

This plate, he explained, was an attempt to recreate the artworks inside his early sketchbooks, which are also on show as part of the exhibition: “I did a lot of collage and watercolour and I was trying to replicate the style of those, but it was much more difficult to do with ceramics.”

With provocative imagery at the crux of everything Perry has created – think phallic figures, devilish gargoyles and funeral urns with barbed wire rims – words also feature heavily in the pieces: “There is something about Britain’s literary culture, in the 80s, we didn’t have the kind of art-visual culture that we have now,” he told us. 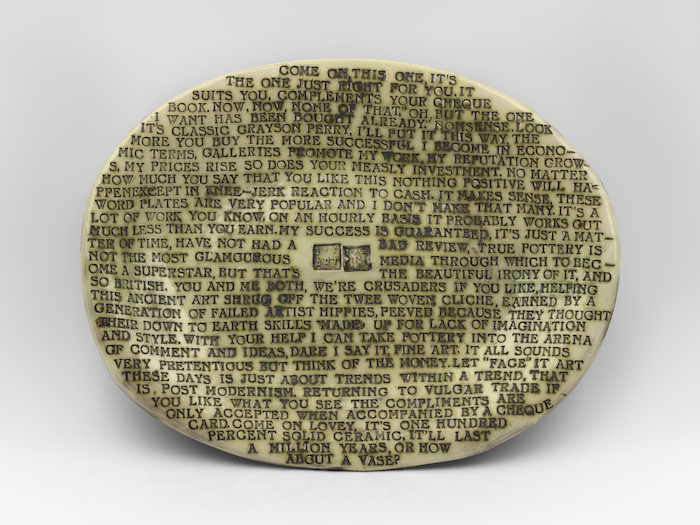 “So, I thought if people have something to read, they will take it [his work] more seriously and they’ll spend longer in the exhibition, so some of these pieces have a lot of text on them.”

Reflecting on his creative process, Perry described how his work is a constant negotiation between the style and the content, all of which he does whilst trying to communicate something in a way that feels genuine to him.

And this doesn’t always mean something ground-breaking: “A lot of things I put on the pots were about awkwardness or something a little bit naff.  I didn’t like it to feel slick or fashionable. My worst nightmare is to become fashionable.”

Building on that Perry told us that if, in 1990, you’d have asked who his female role models were, he would have said newsreaders. He explained that their well-groomed appearances and commanding presence was, and still is, a fetish of his. And this is why he made Newsreader: a plate which perfectly embodied his fantasy of normcore women, an illusion which, at this point, he was not yet to be able to articulate outside of his art. 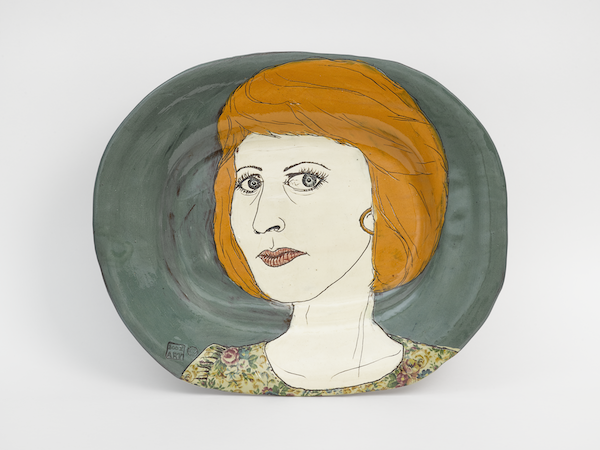 Since the period covered by the show, Perry has become a rather unconventional national treasure and with his unmistakable quick British wit and ability to talk so engagingly on themes of social class, politics, gender and identity, you can see why.

In 2013 he was awarded the CBE for services to contemporary art, and in 2015 he was appointed Chancellor of the University of the Arts London, and every year runs a contest for students to design his robes for the Graduation ceremonies.

As for his early work, despite the pieces being made over 30 years ago, they are teeming with relevance for today.

Tickets and further information can be found at: https://www.holburne.org/