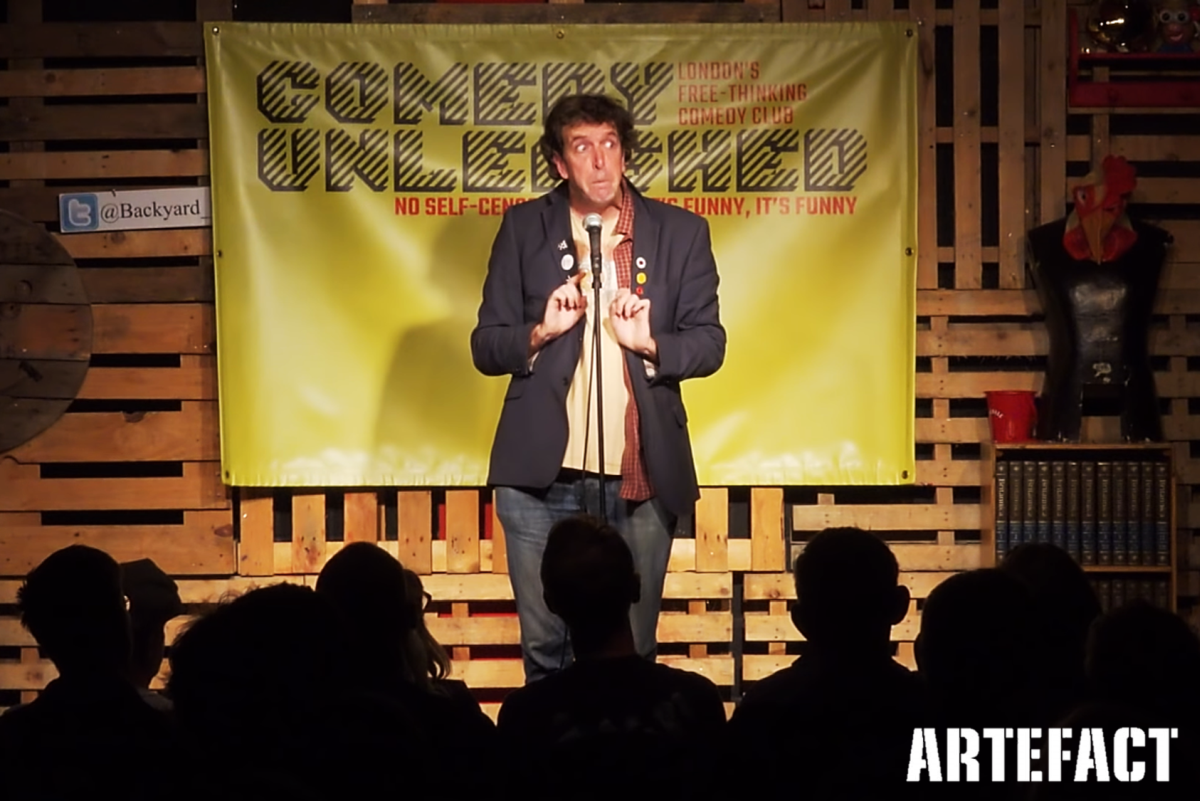 There appears to be a growing awareness among the general public of a heavy prevalence of left-leaning liberal ideals on our television screens and a shortage of more right-leaning and/or conservative thoughts, especially when it comes to comedy and entertainment.

Are TV networks pushing those who push a desired cultural and social narrative into the light in order to bring a societal or cultural change they wish to see? Or is our entertainment industry truly reflecting our diverse culture and equally diverse amount of ideas?

For some, this may be true but for others, a feeling of neglect and often ideological resentment from the ‘other side’ looms over individuals who fail to fit in with the ideals and beliefs our society holds most dear.

Anyone who doesn’t subscribe to entirely liberal PC beliefs, have been left exhausted with the comedy television giants like the BBC have been offering its customers for the past 10 years.

Popular panel show Mock the Week seems to have lost any viable future since Frankie Boyle’s exit and they struggle on relying solely on one political side of the aisle and do not shy away from their bias.

When it comes to a healthy balance of views some believe the BBC has been nothing but apathetic with their attempts at creating a platform for all points of view to be heard and considered.

Stand-up comedy is also under pressure by the overly offended and sensitive crowds. Demands to self-censor or silence are increasing but many are choosing not to fall by the dull sword that is social justice.

US comedian Chris Rock has recently explained how he no longer plays to college audiences because of “their willingness not to offend anybody”. He also discussed how the prevalence of social media has forced comedians into self-censorship.

Canadian comic Russell Peters has also explained “If you look at TV in the ‘70s versus TV now, and you see the things people said back in the day – they said the most off-colour stuff and nobody’s feelings were hurt. Do you know why? Because it’s about intent. The intent then was to make you laugh. And the intent is still to make you laugh, but they’ve drilled it in into your head that you’re not supposed to laugh at this.”

Former Monty Python star John Cleese has been particularly outspoken in his views against PC culture dismissing it as “condescending”.

So, what does the future of comedy look like if comedians are feeling pressure obliging to a narrow consensus of the perpetually offended and outraged? The answer is brighter than you may have thought; thanks to Comedy Unleashed.

A free-speech comedy club located in Bethnal Green, where free-thinking comedians can ‘leave their self-censorship button at the door’.

Co-founded by Andy Shaw and Andrew Doyle who believe no comedian should need to self-censor when performing on stage. They aim to provide a space where comedians can explore and hone new material in front of an audience who appreciate different points of view.

We travelled to Backyard Comedy Club in Bethnal Green where Comedy Unleashed is held, to get a taste of the unrestricted comedy they had on offer and to speak to one of the co-founders Andy Shaw.

On arrival the bar is already packed with people for the sold-out show, adults of all ages turned up in high spirits and were ready for the night ahead.

Headlining the evening was Scott Capurro an American comedian whose material is deliberately provocative. The night was hosted by female comedian Ria Lina, who was quick to make everyone in the audience aware they should keep their outrage to themselves if any joke were to cause offence. 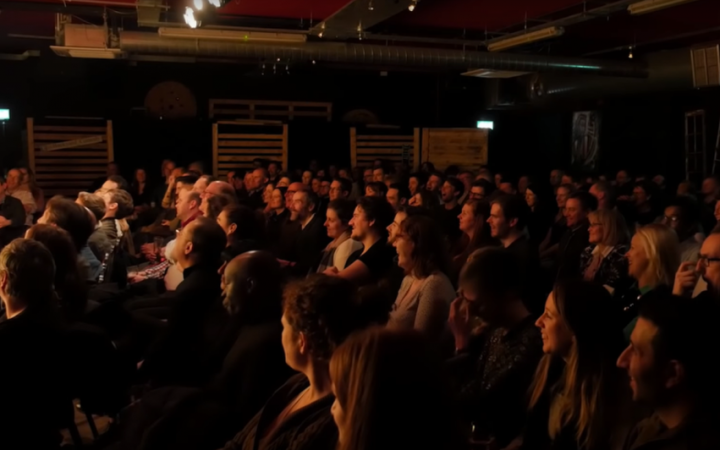 Busy crowd in for another night of Comedy [YouTube: Comedy Unleashed]

The first comedian to enter the stage was Will Franken an American comedian from Missouri who moved to London in 2013. Franken was excellent and his critique on climate activist Greta Thunberg was a highlight with the crowd. “There should be a lipstick called climate change so it can always be on everyone’s lips” warmed up the crowd for the slew of outrageous gags that were to follow; “Sweden is the Mecca of…well its just Mecca” was one of many controversial one-liners to hit a home run with the crowd.

Co-founder Andy Shaw was in attendance that evening working behind the scenes. We asked him if Comedy Unleashed always intended to be a pro-free speech/any joke stands or did it evolve due to political and cultural climates forcing them to make this point.

“Andrew Doyle and I set up the club because we wanted to provide a ‘permissive space’, where comedians could try out new ideas, with an audience that would appreciate it. It seems to have struck a chord and 300 people are turning up to most of the gigs and we often have to turn people away at the door.”

Many are clearly attracted to the premise of the night and is showing no signs of slowing down in popularity. “Comedians like it because they can try out material that they may not do at other clubs or experiment with new material,” explains Shaw.

“Personally, I was bored with most of the comedy that’s on offer. There is a lack of creativity, absurdity, risk and satire. What passes for political satire has decayed into a hackneyed repetition of the news with added punchlines. It has become un-thinking and follows a well-trodden path, with the same old targets. It is quite lazy and, more often than not, snobbish with a veneer of liberal sentiment. I wanted to help shake things up a bit, take some risks and see what happened.”

Shaw has succeeded in bringing a breath of fresh air to the comedy scene with his ideas and feelings towards the current status quo within the industry.

The night contained no self-censorship and you could tell the comedians were never willing to hold back on what they wanted to say to the audience despite the PC culture that engulfs many comedy clubs around the capital, Shaw has solidified the freedom of expression ideals into the club and takes pride in that fact.

“We consider the club to be a home for free-thinking and free-expression, rather than free speech per se. Having said that, we will book any act that has been banned, hounded or ostracised for crossing the line, on principle. If they’re funny, we’ll book them,” he said.

“Laughter itself is liberating, it is a spontaneous response. Sometimes, comedy tests taboos and clever comedians can make you laugh at things that you don’t believe in. We book comedians from across the political and cultural spectrum, or as we say ‘left-wing, right-wing, no-wing, anything except clipped-wing’.”

This mindset has clearly sprouted out of not wanting to conform to the outrage culture that is suffocating many aspects of human communication today and the comedians performing at Comedy Unleashed thrive when acting against the grain of conformity with smart and well thought out jokes the audience clearly appreciated.

Comedy Unleashed is not simply a club for outrageous crude jokes, it is a truly safe space for the darkest and most untouchable of subjects to be made fun of and criticised with the use of clever, well thought-out wit.

We asked Andy why the perpetually offended have so much dominance within culture and why it has become so easy to offend today; “Most people aren’t,” he said. “The majority of people assume the best in other people and take people as they find them. But there is a rapidly developing conformism in our culture, one that imposes an expectation on how we should relate to each other and how we communicate.

“It is re-shaping our language and how we relate to each other. Lots of people in influential positions are worried about taking risks in case they are accused of insensitivity or worse. So, our culture is becoming increasingly risk-averse, bland and conformist. Taking the piss out of the absurdity of this situation is the best tonic.”

Our night at Comedy Unleashed was one to remember and we will definitely be returning for more, places like this are needed now more than ever, in order to revive how it feels to be an autonomous individual rather than members of faux tribes that do their utmost to always agree with one another out of fear to cause offence or upset. Better ideas come out of this along with better jokes.

“There’s a huge audience for comedy that addresses the gap between top-down culture and everyday experience.” Shaw explains. “The popularity of the club is really encouraging and there is an audience for what we do in every town in Britain. If anyone wants to set up a Comedy Unleashed club up in their town, we’ll give them a helping hand. The YouTube site is doing really well, we film all the acts in 4K, we could move into TV production. Some people would like to develop a sketch show. We’ll see.”

The future of Comedy Unleashed looks bright, we urge everyone to make the trip to Bethnal Green to check out the fantastic night of comedy these guys have on offer, even the thin-skinned among you should test yourselves and see how much offence you can handle. It could do a lot of you a lot of good.