When mankind started harnessing the power of nuclear fission it became clear that radioactive waste was going to be produced that would have to be dealt with in a way that could not harm anyone.

Radiation itself was only discovered just over a hundred years ago by Marie Curie, we had so little understanding of its effects that her notebooks from the time still remain highly contaminated and have to be stored in lead-lined boxes.

Many different ways have been explored to try and deal with nuclear waste. Send it into space to crash and burn in the sun is one, but what if the rocket explodes in mid-air, contaminating vast areas of land?

Sinking it to the bottom of the ocean is another, which was in fact done until the practice was banned in 1993. Others suggest sealing and sinking it into the ocean sediment to be swallowed up and cocooned into the rock. The problem with this is that there is no guarantee marine life will not be contaminated and it would be extremely difficult to try and clean up.

It is currently estimated that there are around 250,000 tonnes of high-level nuclear waste on Earth right now. All of this waste is currently being held in interim (non-permanent) storage. These facilities submerge the spent fuel into vast tanks of water, water being a very good insulator against radiation.

They can be kept there, theoretically, indefinitely. However it requires constant supervision and maintenance from humans. The fuel rods are hot so the water surrounding them must be constantly cooled to prevent it from boiling off and exposing the radiation to the air where it would spread.

This problem became very real in Japan in 2011. The tsunami that year knocked out the main and back-up power supply to the containment pool at the Fukushima Daiichi Nuclear Power Plant leading to some of the water evaporating.

Thankfully the engineers were able to restore the coolant system before any radiation could leak out however this shows us how fragile our current method of storage for nuclear waste is. 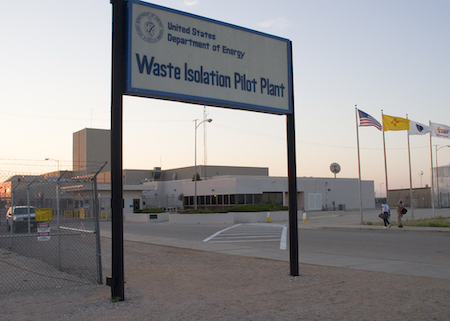 Entrance to the WIPP facility [Courtesy of WIPP]

There have been a few different government projects to determine a way in which to permanently store nuclear waste. The Waste Isolation Pilot Project in the United States is one, their aim is to store hazardous materials from the US’ nuclear weapons arsenal and keep it contained for 10,000 years.

Here it is stored deep in the salt bed of an ancient sea, formed over 250 million years ago, out in the New Mexican desert. They fell substantially short of ten millennia of containment however when it was discovered in 2014 that radiation was leaking from the facility. This led to a $500 million (£384m) cheap up operation and the plant being closed for three years.

Finland is working on a permanent solution for water from its nuclear power plants and they are currently the closest to opening a facility of this type. Onkalo, which means ‘hiding place’ in Finnish.

Construction began in 2016 and it is expected to start receiving spent fuel from Finnish nuclear reactors in 2023, this is a very long term project with the tunnels not expected to be finished for at least a hundred years and a designed to remain sealed for 100,000 years. Never to be open again. Nothing on this scale, this timeframe, has ever been worked on before.

What’s the oldest man-made thing you can think of; the Colosseum, Stonehenge, Pyramids of Giza? Chances are if someone asked you to name something manmade that was 10,000 years old you wouldn’t be able to, and for good reason.

The oldest manmade structure we’ve found is The Cairn of Barnenez in France which was built in 4850 BCE, around two thousand years before the pyramid of Giza was even finished. 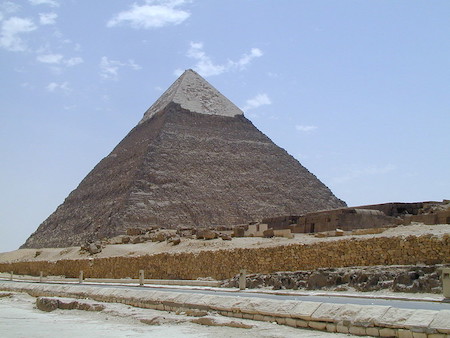 One of the three pyramids of Giza [Manfred Caruso via Flickr]

But what if these places are found? What if they are opened? We have no sure way of knowing what future peoples will think when they come across sites like this if they were to discover them what could they think, something religious, a burial ground perhaps. The hiding place of long forgotten treasure?

If we look back in history we can see examples of sites that were meant to be sealed for eternity, the pyramids are one. They were intended by their builders to be the final resting place of the Egyptian Pharaohs. However, curiosity still got the better of explorers even with warnings of curses and death to anyone who dared enter.

We all did Shakespeare in school which is only around 400 years old, and Beowulf which is a thousand is incomprehensible to us as modern English speakers. The Ancient Egyptians also give us another good historical example when it comes to the problem that we face trying to send a message thousands of years into the future. Their language of hieroglyphs, only 5,000 years old, was lost to us for millennia and wasn’t able to be translated again until 1822 after the discovery of the Rosetta Stone.

So what could be done to warn people in thousands of years about the dangers of radioactive waste? The first and most obvious thing would be to put up a sign, “Danger! Do Not Dig Here.” or something similar with more detailed information about the properties of nuclear waste and why we cast it into the earth.

Again this raises problems, will the people the message is intended to be able to understand it just as we couldn’t with the hieroglyphs. Will they even be able to read?

Artist’s impression of what these spikes could look like. [Michael Brill courtesy of WIPP]

To get around that problem it has been suggested to use symbols instead of text; a skull and crossbones, cartoons of people dying after coming into contact with what’s buried. This idea has been taken even further to include hostile architecture. Dark spikes rising from the ground, imposing blocks of stone to make whoever comes across them feel unwelcome and frightened. This approach would rely on scaring any potential intruders away rather than passing on any information about what is there.

Will making the site in fact just bring the unwanted attention which we are trying to avoid? This raises another important question, why put anything there at all? Let these sites be forgotten and reclaimed by the wilderness. After all, any structure that we could build will start to wear away until eventually there is nothing left.

There has been much thought over the problem of warning our ancestors and some very interesting ideas which have come out of it. In the early 1980s, the German Journal of Semiotics (Zeitschrift für Semiotik) sent out a poll asking readers to send in their suggestions about how a message could be sent 10,000 years into the future.

Linguist Thomas Sebeok suggested creating an atomic priesthood, the idea behind it being that religion has been one of the longest-lasting influences that we have today in the modern world. He suggested that by using myths and rituals the priesthood would be able to preserve the locations of nuclear waste sites along with communicating their dangers and perhaps even enforcing punishment for those who go against their teachings. 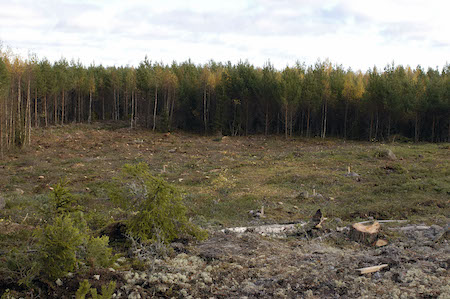 The Onkalo site in 2003 before construction began. [Posiva Oy]

Another suggestion that was published came from Françoise Bastide and Paolo Fabbri, they proposed genetically engineering cats to glow in the presence of radiation.

The reason they chose cats is due to the long standing nature of the domestic relationship man has with them and theorised that this would continue into the future.

Similar to Sebeok’s idea they envisioned the creating of songs, fairytales and a culture around the idea of these glowing cats and the dangers that it meant if you were ever to see one. This idea became the subject of a short documentary in 2016 was saw renewed interest in the creativity of Bastide and Fabbri’s idea.

One thing we know for sure is that anything could happen. We simply cannot predict how humans will look, what culture will be like in a hundred millennia from now. If they will know the dangers or if our warnings will have been lost to time.

Today as we keep our arsenals of nuclear weapons maintained and our scores of nuclear reactors running more and more hazardous waste will be produced, there is currently no way to make the stuff inert so it must be hidden.

The scientists at Onkalo use the term ‘Decisions Under Uncertainty’ to describe the challenge they face. And part of that challenge is knowing that there are questions we cannot answer.