Art and cycling, after all, are both expressions of freedom and creativity.

The futurists became slaves to the speed that bicycles, motorbikes and cars could offer. They saw the ideal man as machine men, with machine hearts, who had become one with the product of man’s industry. Others loved the careless whimsy the bicycle offered, riding around country lanes on sunny afternoons.

Other creatives take it so far as to celebrate ‘Bicycle Day’ on April 19 to remember the day that Swiss scientist Albert Hofmann experienced: “Kaleidoscopic, fantastic images surged in on me, alternating, variegated, opening and then closing themselves in circles and spirals, exploding in coloured fountains, rearranging and hybridizing themselves in constant flux,” all whilst riding his bicycle home from his laboratory, escorted by a lab attendant.

This was no surprise, as that afternoon Hoffman had just invented and accidentally ingested 250 micrograms of Lysergic Acid Diethylamide, better known as LSD.

Artists of all kinds have taken inspiration from the bicycle since its invention in 1817, and over 200 years later still are. One such artist is Andrew Thomson, based in Guildford, who spends a majority of his time in his studio “drawing and trying to stop myself from avoiding answering emails, sitting in a nice coffee shop drawing people, or out cycling.” 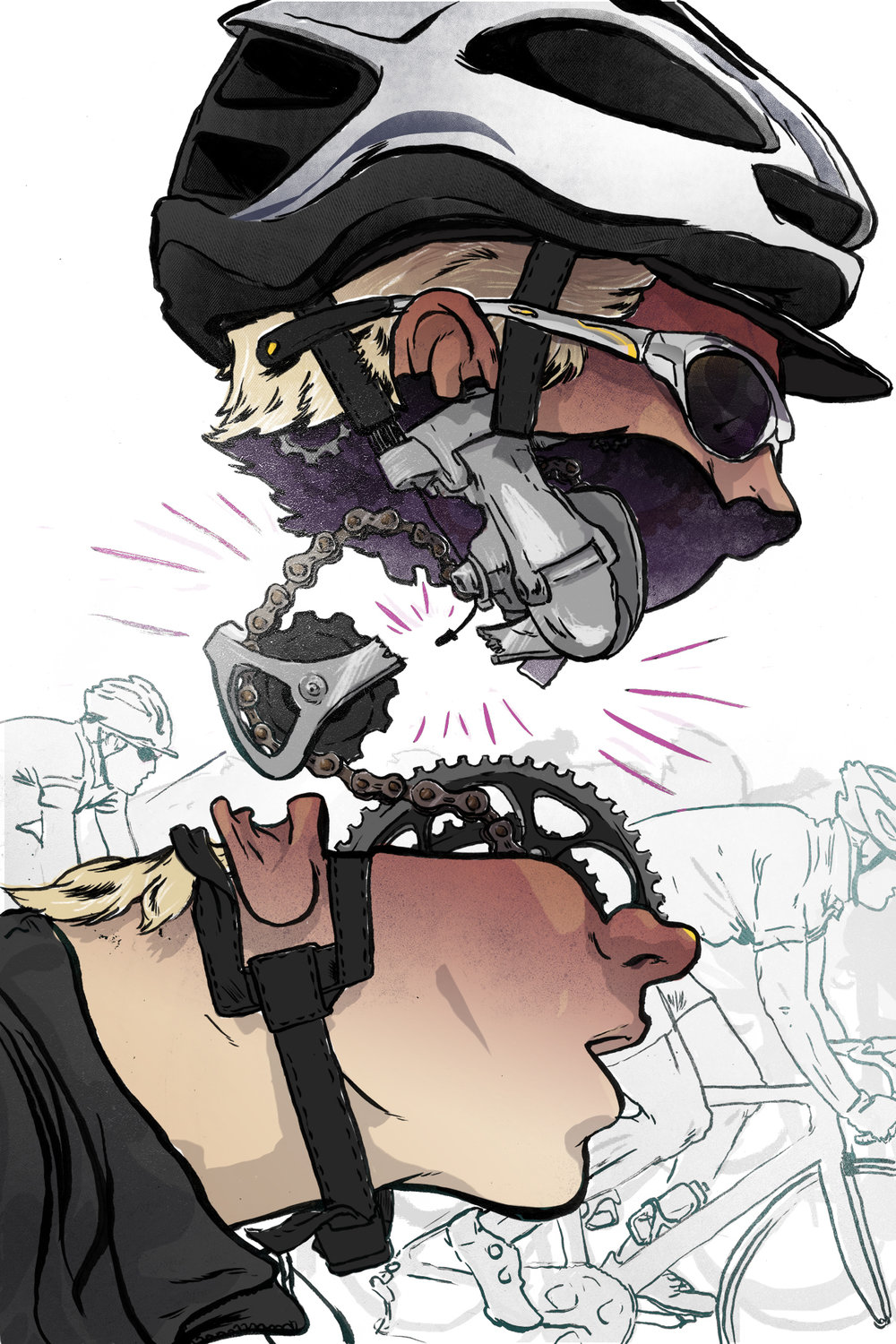 Andrew has worked on a variety of projects from children’s books to magazines, often travelling up to London on his Brompton folding bike. Andrew is fortunate enough to live close to the Surrey Hills, a British cycling Mecca for those in the capital: “Getting out to explore the hills, lanes and forests around here is hugely important to me.”

Andrew fits into the bracket of cyclists who benefits from the meditative properties cycling provides. “While I’ve never pushed myself hard enough to get fast enough to do any racing, I still enjoy the Zen-like long miles, challenging gradients and the speed that comes with being out on the road,” adding: “the bike is the best place to think that I have.”

After Andrew left university to set up his own illustration company he bought his first road bike off eBay. Soon after this he experienced the connection between art and cycling; now he talks about cycling and drawing as if they are almost childish hobbies that lean into one another.

“I always tell people the reason I can draw well is just because I never ‘grew up’. Every kid draws, without inhibition, expectation, or even a plan. Kids just draw. At some point, ‘real-life’ starts to creep in and drawing gets seen as something childish, or uncool, or not real work, and so people stop,” he tells us. 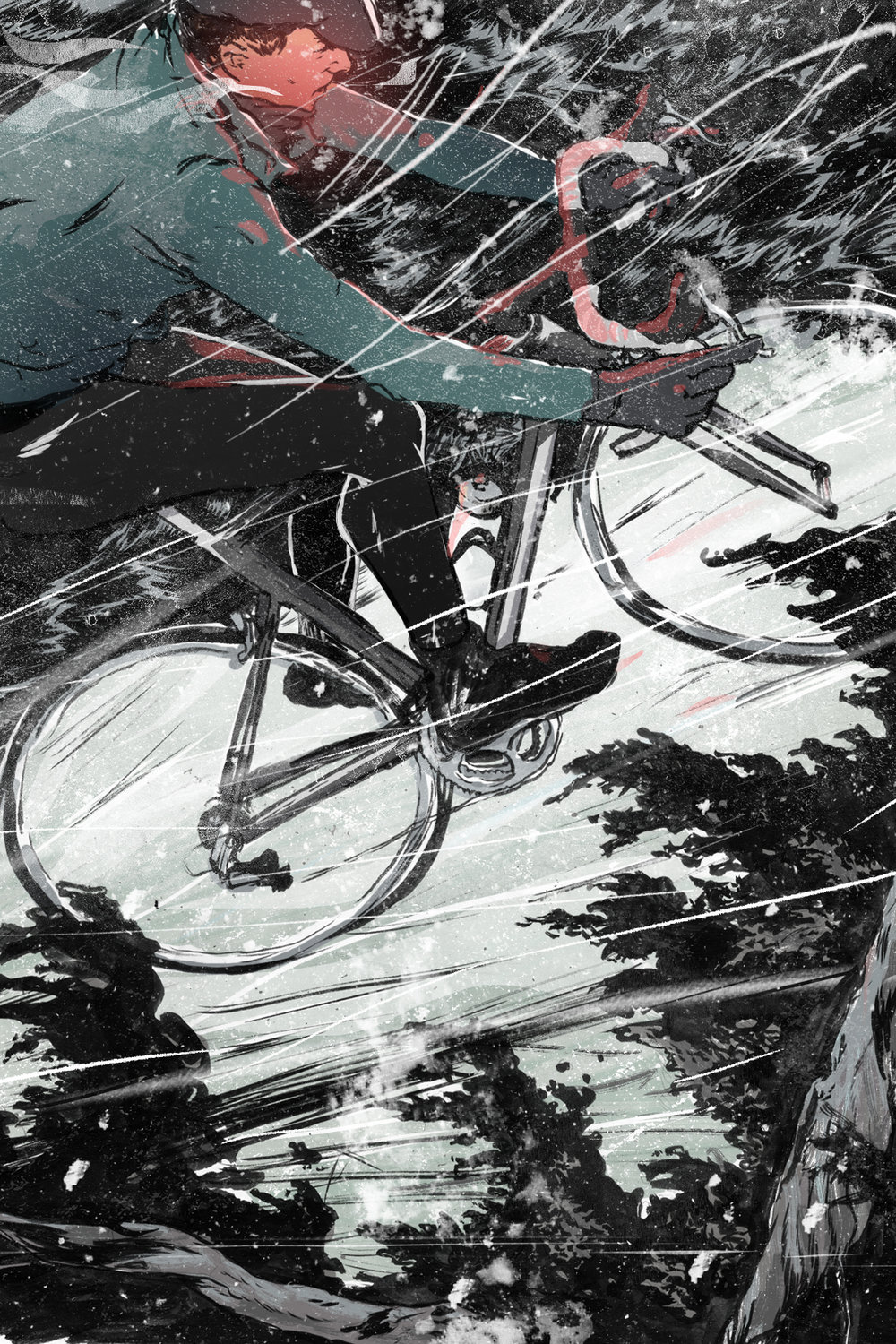 Cycling, like any exercise, is good for mind, body and soul but, it can hurt. “You’d be surprised the ideas that pop out when you’ve just finished climbing a steep gradient, deep in oxygen debt, your lungs and legs screaming for you to stop,” he says.

It can be easy to forget why we put ourselves through what can only be described sometimes as absolute misery. In those moments where everything hurts and you need to focus purely on one thing can be the only times you truly empty your mind, forget about work, stress and relationships and once you are done the new ideas flood in. 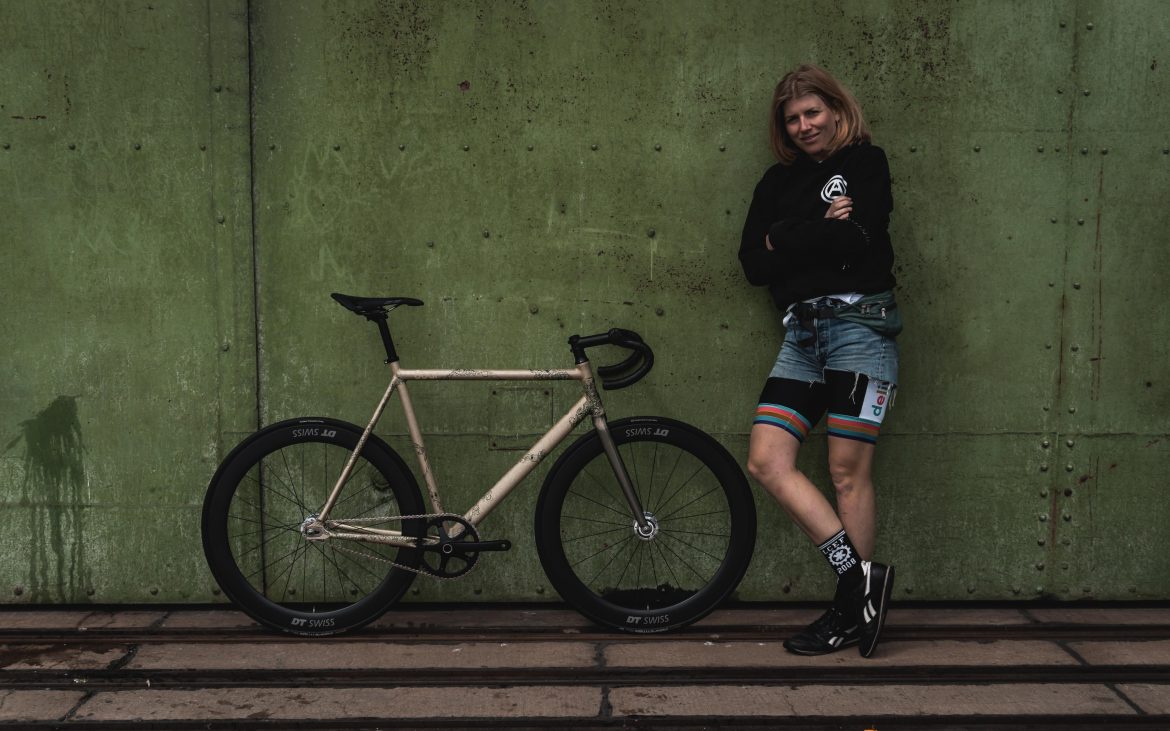 Cycling is unique in this respect because it is very much a sport in which you get out what you put in. On the other side of every hill, there is a decent and in seconds you can find yourself “flying down a country lane with only the sound of your breath and tyres on the tarmac in your head.”

Anyone who has done any serious riding will tell you that the adrenaline that comes with taking on up to 50km/h (31 mph) on a twisting road with only a couple of millimetres of rubber between you and a trip to the hospital is just as euphoric as the pain and glory that comes with the climb. “In that respect, cycling impacts my work a whole lot,” Andrew says.

Cycling has a long and prestigious history in the UK, we are by no means short of champions flying red, white and blue on the podium. It is time, however, to look from the country to the continent.

Every major event on two wheels that has etched itself into the history books has been raced on the mountains that have carved boundaries on the European Continent. From the Tour de France to the Giro d’Italia, the continent has the roads, the climbs and the competition. 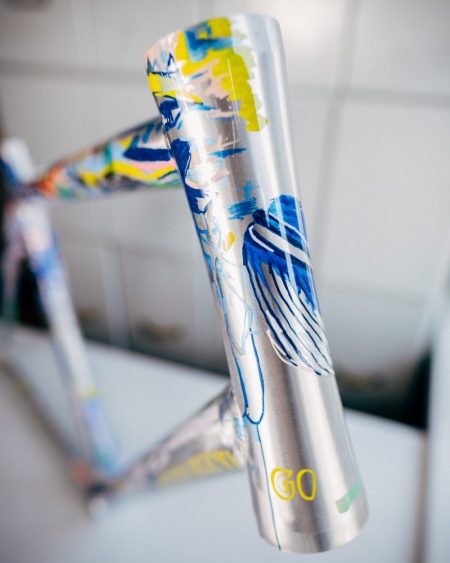 This is where Juliane Borths has found her corner of the world. Jule, from Germany, has lived in countries and cities all over Europe settling in the coastal town of Rostock in Northern Germany. Unlike Andrew, Jule competes in various forms of cycling but calls the road riding that Andrew loves “boring”.

Jule got into cycling through riding Fixed Gear, a street style of cycling that is regarded as a more, exciting, dangerous and underground discipline. Since then Jule has moved away from Berlin where she began riding Fixed Gear and moved towards Gravel, a mix of road riding and off-road with gears and brakes – and Tracklocross which is a combination of fixed and off-road, without brakes or gears.

“I have this feeling in Germany now that all the Fixed Gear crews are transitioning to gravel or ultra distance. And maybe some who do Tracklocross like me. If you do it in the woods you think yeah I don’t have a brake, it’s fine,” says Jule.

Jule started out as a fashion designer in Belgium, this is where she met a colleague who encouraged her to start riding to work. “One day she said hey Juliane, do you want to come and I was like yeah! So I started to ride in this really crappy single-speed city bike with no brakes and yeah just a crappy bike. And so we did it one evening in the rain and I was like this amazing. My flatmates had a road bike and they said I could take it and I got hooked.” 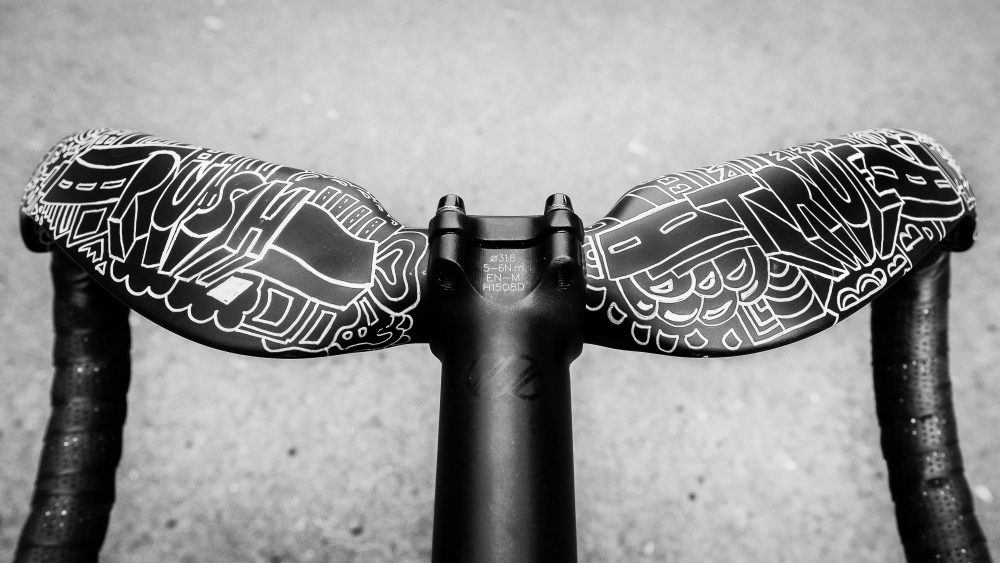 A means to commute has morphed into a love of competing on two wheels, racing every weekend and recently signing up to the B-Hard Ultra Race, a 1200km (745 mile) bomb across Bosnia. When Jule moved to Berlin she began racing on the Fixed scene and then one autumn injured herself.

“I had a bunch of white saddles from 8-Bar (a Berlin based manufacturer) at home and I started to draw and thought, why not draw on the saddle? So I got a random pen and I didn’t even think if it would practically work. I uploaded it on Insta and everyone was like oh that’s cool, and I even surprised myself.” Jule’s Instagram @i.draw.on.bikes, where she documents her journey from saddles to frames to custom-designed parts, now has more than 2,000 followers.

Although Andrew and Jule are very different in many respects, from their art to their sport, they can agree on one thing: “Sometimes just a ride in the woods helps me forget about the daily stress and bills I have to pay. When your mind is free and kind of bored you have the best ideas. For me, art and cycling are dependants on one another, if I couldn’t cycle I would not be able to create art,” says Andrew.

Jule’s experiences riding for pleasure and competing have been very different. Competition can be a very stressful and intense event: “You go to a race, they have a coach, sponsors and their team and the younger ones usually have their parents with them who shout at them during the race.”

Fixed gear racing, on the other hand, is a much more social event. “If you go to a fixed gear race you get there before, meet with your friends have chitchat and then you do your race and then afterwards it’s partying and beers. It’s completely different.”

It is perhaps not surprising that Jule prefers her time with what she describes as a “left-wing, equality, creative bubble with a lot of people moving in the same direction.” Perhaps it is also not surprising therefore that Jule considers the most important thing you need to know about her is that she has a self-professed sense of humour.

Andrew also agrees that “links via bike messengers to the fringes of society, people unsatisfied with the day to day grind who feel driven to push against the grain, whether you’re riding bikes for a living as a messenger, drawing pictures as an artist. People like to group together and make things with others who have a like-minded approach to life,” is one of the key reasons he loves the sport. 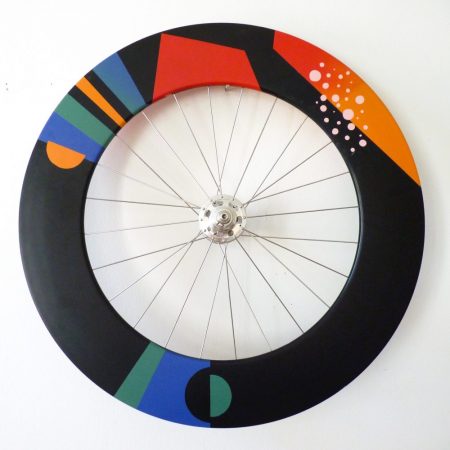 I came across Andrew when reading a blog post which was a segment of a book by award-winning writer Julian Sayarer, a bike messenger who ended up riding around the world. Juliane documented his time as a courier and a creative living on the other side of society, not living a ‘nine till five’ lifestyle.

Much like the act of drawing or painting or simply creating art any way you know how is a way of escaping life and the messy complications it can throw your way. Andrew says that: “occupying my entire body, and a majority of my mind, on a bike ride relieves the pressure.”

Life is full of expectation, social and societal norms and pigeon holes we are constantly pushed into. Jule talks about how she moved away from this in her life by taking responsibility for her own actions by riding from Berlin to Copenhagen armed with just a paper map, her legendary sense of humour and some goodwill.

This came after being told by her grandmother that it was not safe to travel alone as a woman and that it would be dangerous. Jule says that these days there is no excuse to go on adventures: “Nowadays everything can be sold with an app, online with money, we are not used to asking any more for basic things. Sometimes I am also shy to ask for help.”

Both Andrew and Jule decided to go on an adventure, take a chance and do their own thing. Cycling has been there for both of them as it has been for so many others to bring the hectic nature of life in and out of focus and allow them to grow as people.

You can visit Andrew and Juliane’s Instagrams at:

By Alexandra Andronache
6 Mins read
With AI imaging improving over the last few years, the question has also arisen about how it will affect real art and artists.
LifestyleVideo

Portraits of a broken heart

By Tayler
1 Mins read
An intimate examination of heartbreak in all of its forms, we discuss grief, loss and betrayal, looking at what it truly feels like and whether we can really overcome it.