After the worldwide success of the Chilean feminist performance ‘Un violador en tu camino’ (A rapist in your way), women in London came together in December 2019, to demand an end to sexual and gender-based violence.

“Patriarchy is a judge, who judges us for being born and our punishment is the violence you don’t see. It’s femicide. Impunity for my killer. It’s the disappearance. It’s rape. And the fault wasn’t mine, nor where I was, what I wore.

“The oppressive state is a macho rapist state. The rapist was you. The rapist is you. It’s the cops, the judges, the state, the prime minister. Sleep calmly, innocent girl without worrying about the bandit, over your dreams smiling and sweet, watches your loving cop.”

We are the angry and loud scream of all those women who have lost their voice.

These lyrics were chanted alongside a unique rhythm, by Latin American women in London, who started a series of protests from Tower Bridge to Soho and Parliament’s Square.

The chant and choreography were first performed on November 25 in Chile, to commemorate the International Day for Women’s Rights. This day has become highly regarded in Chile, following the murder of the three Chilean Mirabal sisters, political activists from the Dominican Republic, who were brutally murdered in 1960 by order of the country’s president.

Every year since, NGOs and activists have organised activities to raise awareness and eliminate the on-going issue of violence against women. 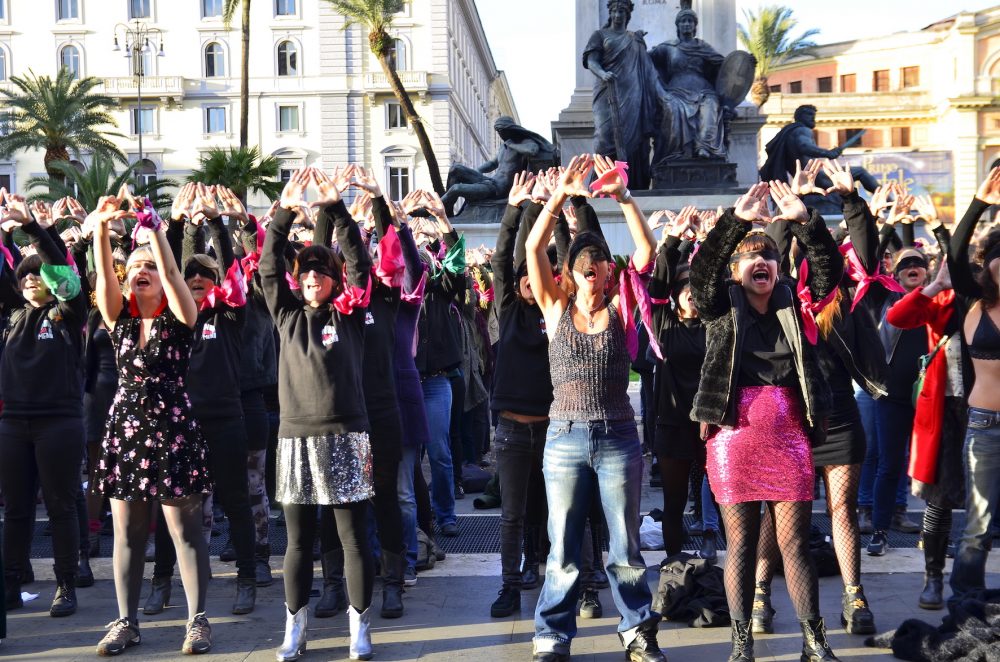 In 2019, International Women’s Day was commemorated by hundreds of Chilean women shouting in union for the first time, in front of Santiago’s parliament, becoming a memorable and powerful event.

Remarkably dressed, with black blindfolds covering their eyes and red hands painted on their mouths. Accompanying the lyrics, the women created a simple but effective choreography going with an electronic beat, which left viewers with goose bumps and conquered the sensibility of people around the world.

The video uploaded to the web created an immediate global sensation, the biggest manifestation ever seen since the start of the protests. 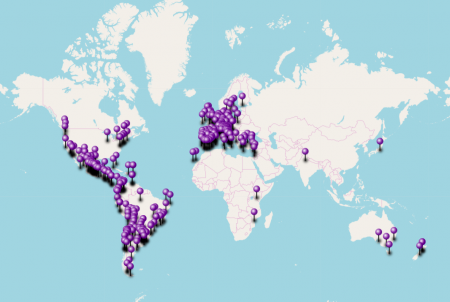 World map showing the countries where the performance has been replicated [Data: Umap]

Since then it has been seen in Latin America, Central America, the United States, Australia, Africa and Europe. Women of all ages and various nationalities, affected by different realities and social systems, felt involved and immediately began to replicate the flash mob as an act of solidarity, often singing in their own language. The song has also been translated into sign language.

‘El estado no me cuida, a mi me cuidan mis amigas’ (The state does not care about me, my friends take care of me), was a verse written specifically, to highlight solidarity between women.

The choreography also brings to surface, other issues facing our society – the repetitive crouch down/squat, is a portrayal of the position women protestors have to take when arrested by the police. Additionally, feminist participants blindfold themselves as a act of solidarity, to those who have been blinded by the brutalities committed by the police.

In one city after other, women have inspired each other to keep performing the chant, reaching 10.000 participants in Chile, only a week after the first protest. 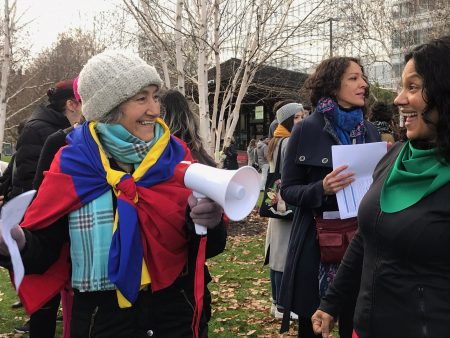 Feminist activists during the protest in Tower Bridge [Carlotta Proietti]

“I think it’s great how this movement has been spread around the world. No matter which country you are from, neither how the situation in your country is, we are women, we just want to get together and create this huge community to support and defend each other,” a Latin American activist performing in London said.

Weeks later, the web is still bombarded by thousands of videos of the chants in hopes of echoing around the world. It is not only an act of solidarity, but a genuine call for justice for those who understand that femicide is a global issue. Harassment, exploitation and rape can happen anywhere in the world and must be tackled.

“We are fighting all together for the same justice, against gender violence. We are not part of any feminist association but we are feminist women that since the diaspora are asking for structural transformation in our country of origin,” said another protestor in London. 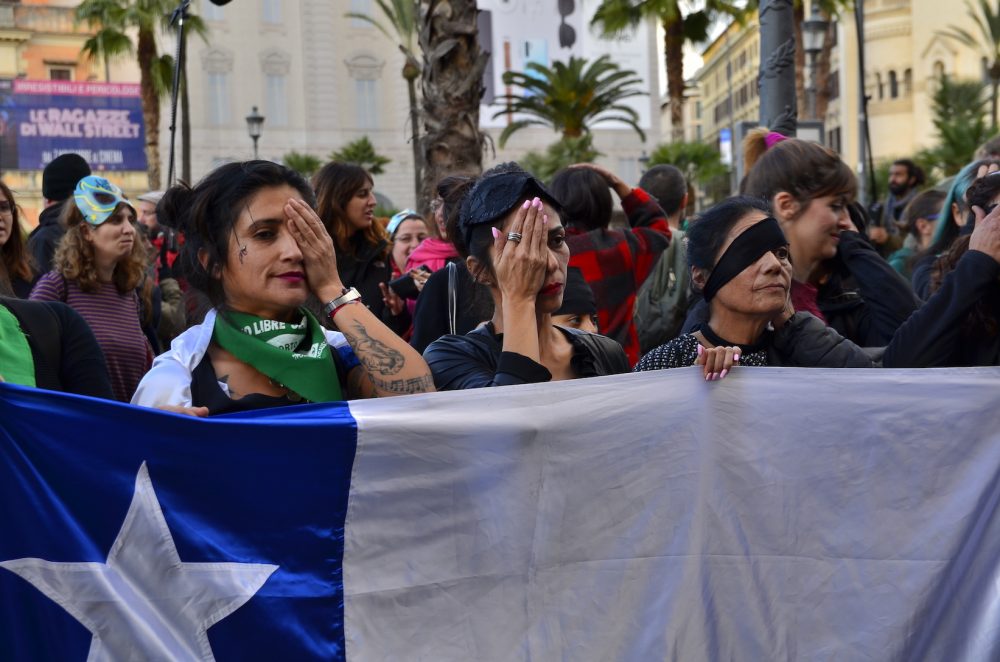 “Violence against women is a human rights violation, social justice and public health problem that touches every level of society in every part of the world,” PAHO states.

The worst case of such is femicide – the murder of women simply because they were born a woman. The term was first coined by criminologist Diana Russell in 1976, when she testified about lethal misogynist crimes at the International Tribunal on Crimes against women in Brussels.

Since then, the term has been widely adopted in several other Latin American countries. It corroborates the significance of the issue and has motivated feminists to create anti-femicide organisations to combat crimes of violence against women.

“What state can exist, when it is the same system that support the continuous violation of human rights?”

“Femicide is usually perpetuated by men, but sometimes female family member may be involved. It differs from male homicide in specific ways: most case of femicide are committed by partners or ex-partners, and involve ongoing abuse in the home, threats or intimidation, sexual violence or situations where women have less power,” a statement from the World Health Organization (WHO) explains.

According to a United National Development Program Report published in 2017, Latin America has the highest rate of gender-based sexual violence against women in the world, and in Central America, two of every three women killed are victims of femicide. 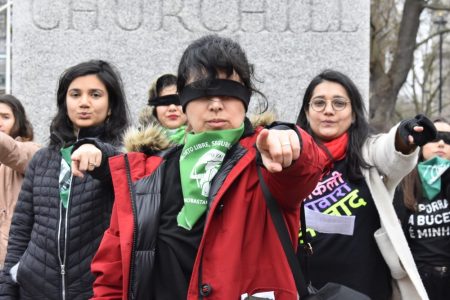 “This performance rises in a moment when social mobilisation is strong and profound. The feminist struggle is part of this fight for alternative system to the current one, for the need to change what is no working,” a member of the Chilean Assembly in London said.

The idea of the performance originally came from a feminist theatre group in Santiago, known as ‘LasTesis’, initially composed by four women. It is based on the work of the Argentinian feminist theorist Laura Segato, an international authority recognised for her work concerning sexual violence and the murder of women.

She believes that sexual violence is not a social problem but instead a political one, and society has to be taught in regard to gender-violence issues.

This topic was explored by the feminist activist and academic Ana Carcedo, in her research ‘We don’t forget. We don’t accept. Feminised in Central America’, in which she analysed how the increase in femicide is linked to the political and economic context of the region.

Carcedo explains the concerns and the problems that globalisation has brought to Central America, particularly towards women. With the countries’ development, the Mafia has become the most successful business, enabling the traffic of drugs and women.

“Today, criminals have started to use women as leverage. For example, if the mafia behaves like ‘gentleman’ with the enemy who steals their drugs, they will never recover their money or drugs, but if they are good ‘businessmen’, they use the women in his family, because they are ‘disposable’ and their enemy will feel threatened,” Carcedo told us.

In this climate of distress and anger that populates the country of Chile, Chilean feminist association ‘RedChilena’ asks: “What state can exist, when it is the same system that support the continuous violation of human rights?”

In fact, after the Pinochet military dictatorship in the 1990, Chile has seen 30 years of democratically elected administrations, achieving benefits and economic growth.

However, according to the Atlantic Council not all Chileans have benefited from this expansion: “Privatised education, health care and pension system still disproportionately favour the wealthy, and they have left a significant portion of the population in poverty or debt.” 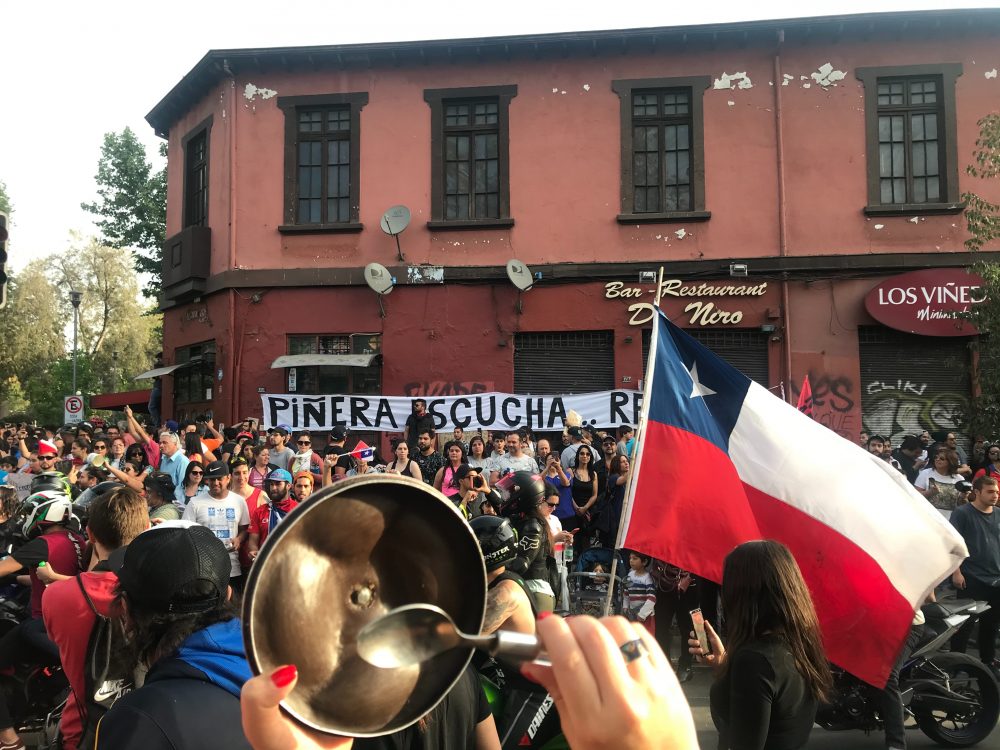 On October 18, the enraged citizens of Chile started to take action for their rights. The battle was initiated by a student protest over the spike in transport fares, becoming the start of an ongoing civil protest, highlighting the frustration of the population.

People have taken to the streets against government reforms, high cost of life, bad public services, education and health. Since the Chilean constitution was created during the dictatorship in 1980, they are demanding a new constitution that meets the benefits of everyone.

In response, the current president Sebastian Piñera, declared a state of emergency and sent military forces to the street. Police started firing pellets or tear gas canisters directly in the face of protesters, with no exception. 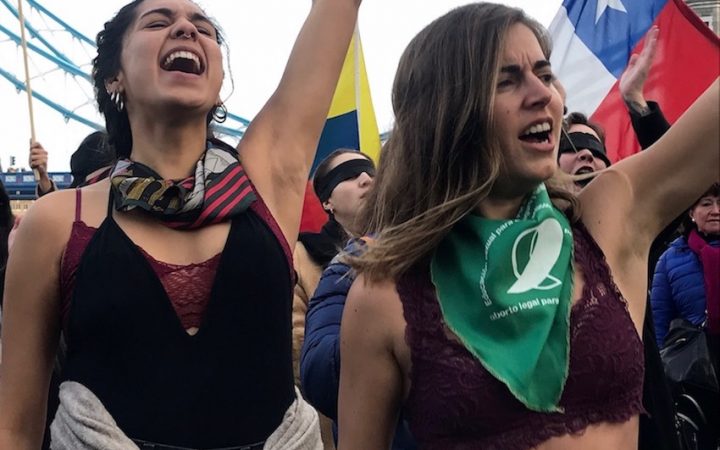 Women shouting as a sign of rebellion, during a feminist protest in London Bridge [Carlotta Proietti]

In an investigation conducted by the UN concerning the period from October 30 to November 22, 113 cases of torture and ill-treatment due to beating have been documented.

It was also revealed that 24 cases of sexual violence against women, men and adolescent occurred, including also practices such as forced stripping, touching and rape by members of the police. In this scenario, the feminist protest was and is essential to shine a light on the constant and unjustified violence against women.

In London, the protests were organised by the Chilean Assembly in London who launched the feminist hymn in the country, and by the Alliance of Women in Academia (AWA), marking the end of the 16 days of activism global campaign against the violence towards women.

“Yet, nothing has changed. We still want women rights to be considered human rights, locally, nationally, regionally and worldwide. We demand serious policies, actions and budget to fight the overlooked pandemic of Sexual and Gender-based violence,” the AWA posted on Facebook.

The feminist struggle has been prominent for decades, nevertheless a woman’s need of recognition and respect is still an ongoing demand.

It may take time for women’s rights to be recognised worldwide and these protests may be forgotten, but every fight should be seen as an essential piece of the ‘equality puzzle’ that women fairly demand to be completed.

“The revolution will be feminist or it will not be,” the Chilean Assembly promises.