Australia has just faced one of the most brutal and relentless bushfire seasons on record, 11 million hectares of land is estimated to have been decimated by the fires that have swept the entire nation. At least 30 people have lost their lives along with an estimated one billion animals, with some endangered species under threat of extinction.

The fires started in September last year in the state of New South Wales before spreading rapidly to many other parts of the continent. In December last year, the state Government declared a state of emergency after high temperatures and prolonged drought intensified the bushfires.

Firefighters from New Zealand, United Arab Emirates, Romania, Canada and the United States, among others, have travelled to Australia in order to support the local fire services efforts, particularly in New South Wales. Every Australian summer the fire season hits, with the hot, dry weather making it very easy for fires to start and spread.

Many have been quick to blame climate change for the devastating events, with many celebrities voicing their opinion on the matter during the recent Golden Globes awards ceremony. “When one country faces a climate disaster, we all face a climate disaster,” Cate Blanchett declared. “Make no mistake. The tragedy unfolding in Australia is climate change-based,” Russell Crowe said in a speech read by actress Jennifer Aniston in his absence.

Former Secretary of State and 2016 presidential election candidate Hillary Clinton, was also quick to tweet out her climate change concerns; “Australia’s bushfire emergency, spurred by climate change, has killed 24 people, destroyed thousands of homes, and led to the loss of an estimated half a billion animals.”

The assertions of climate change are plentiful, backed up by very little fact and a lot of emotion. The claims come after nearly 200 people have been accused of starting the fires over the past few months with 24 people arrested for deliberately starting the bushfires in the state of New South Wales alone. So, is this devastating event a climate issue or a human one?

Dr. Paul Read, co-director of the National Centre for Research in Bushfire and Arson, explained last year: “About 85% are related to human activity, 13% confirmed arson and 37% suspected arson. The remainder is usually due to reckless fire lighting or even just children playing with fire.”

A 16-year-old boy was found to have started a fire that destroyed 14 homes in central Queensland. The situation was dealt with under the state’s Youth Justice Act. Two more teens, aged 14 and 15, were charged with endangering property by fire that destroyed two homes and forced hundreds to flee the area.

Many are also blaming the negligence of the Australian government, who are accused of buying ‘green votes’ by locking up huge amounts of land as ‘national parks’. Some claim their Government have failed to use the funds required to maintain fire trails. 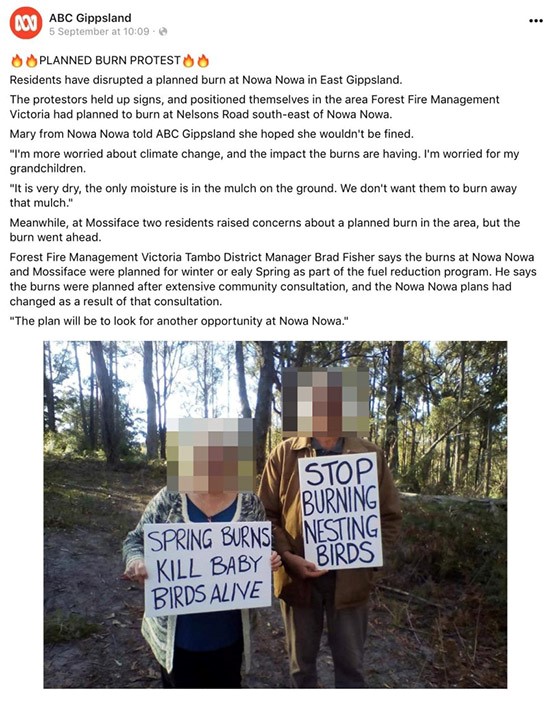 The technique is known to increase germination of some trees and reveals mineral layers that increase seeding, renewing the forest as a result. Unless heavy woodland areas are managed with these types of burns, out of control wildfires will continue to occur.

In September last year, the Australian Broadcasting Company (ABC) posted a story on Facebook focusing on locals who were protesting the prescribed burns, they claimed were “killing baby birds alive”. Local protestors managed to stop the hazard reduction burns from going ahead. The Forest Fire Management manager has stated these controlled burns were planned “after extensive community consultation”.

Shockingly, in large parts of Australia, it remains illegal to remove trees from your own land, even if you wanted to a create fire break to protect your property. Despite the obvious risk this ban puts on to homeowners living in zones where bushfires are more than likely to occur. Trees have been selected as a ‘carbon sink’ and supposedly offsets Australia’s CO2 emissions.

A volunteer firefighter was fined AU$100,000 (£52,000) in 2002 and was treated as a criminal for creating a firebreak on his own property. The man’s house was the only one not to burn down in around the area during the Black Saturday bushfires in 2009.

Many Australian residents are in uproar of the bureaucratic mess caused by the Green Party, many claim they have failed to take any blame and have instead chosen to aim it all towards climate change.

A debate among politicians is now under way, to whether more hazard reduction efforts and back burning could have lessened the impact of the devastating fires. Australian Prime Minister Scott Morrison and North South Wales Premier Gladys Berejiklian have both refused to be drawn into the debate, saying now it is not the time for politics.

A decision by the New South Wales Government to cut funding to fire services based on budget estimates, as well as a holiday taken by Prime Minister Scott Morrison, during a period in which two volunteer firefighters died, and his perceived apathy towards the situation, has also resulted in controversy.

No significant long-term decrease in rainfall or increase in temperatures has occurred in the affected regions. It has been dry in New South Wales where the majority of the fires started. Although there have been several years where the region has been a lot drier.

There is currently little to evidence in support of the claim climate change was the cause of the wildfires.  The claim is contradicted by the temperature and rainfall records of the Australian continent.

The image from the Australian Bureau of Meteorology shows rainfall in New South Wales is well below average, but is no worse than many previous years on record. 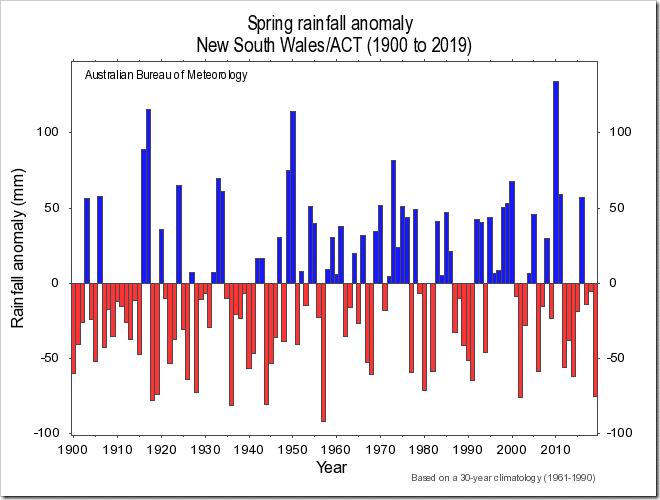 The same applies to temperature. Despite the current high temperatures in New South Wales, there have been times when it has been much hotter. Between 1910 to now, the temperature has not reached new heights since early 2000. 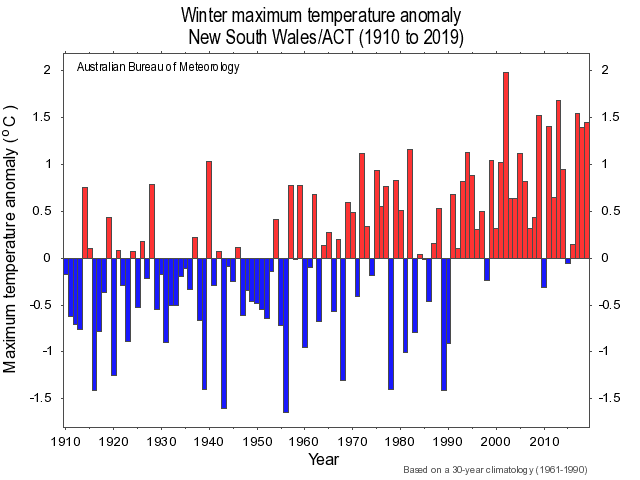 Authorities in Australia have formed Strike Force Indarra, comprising of detectives from homicide and arson units in an attempt to find the culprits who started these terrible fires. They have stated other causes for the fires include lightning strikes and a natural weather phenomenon called The Indian Ocean Dipole, again neither of which have anything to do with man-made climate change.

While climate change may be an issue of concern for many people, this should not allow the truth to be warped when disastrous events like this take place. If it is, we run the risk of seeing another tragic event like this happening again, due to the fact the decisions made to  willingly ignore the real prevention methods and causes. Our mainstream news and climate change activists are doing the world a huge disservice lying to the public on the true nature of the Australian wildfires.