Pie and mash has always been a part of London food culture; it is inherently British.

The traditional ‘English’ stereotypes of bulldogs, pints in the pub and an undying love for football still stand the test of time, but food in the capital is different. As in all areas of mass immigration, London’s society has changed and the food we eat certainly reflects that.

We eat Indian roti, Middle Eastern shawarma and Japanese ramen; dishes from all over the globe. It makes the extortionate rent worth paying. Yet, sometimes it is nice to reminisce to a time of cobbled streets, gas lanterns and horse-drawn carriages.

It makes you feel warm and wholesome, which is why I chose pie and mash for lunch recently. In a world of food that compete to be the extraordinary, pie and mash promises a good honest meal at an affordable price and boy, does it deliver. 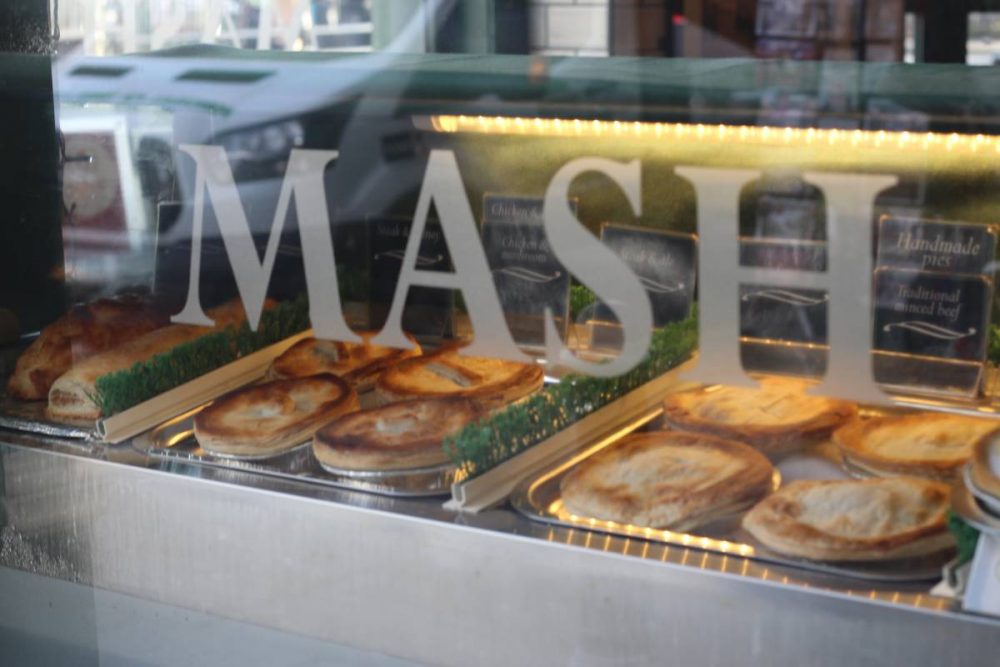 Fresh out of the oven pies in the window of Goddards.

My research led me to Goddards in south-east London. They have been around the block, quite literally. Having first opened their doors in 1890, Goddards is one of the longest serving pie and mash shops in the capital. Owner Jeff, from the fourth generation of Goddards, serves pies to hardcore Londoners, tourists and everyone in between.

After a couple of shop moves, they settled in Greenwich in the 50s when Jeff’s grandfather was in charge: “My grandad opened up the shop around the corner, then when he retired in the 70s, my Dad took over. He continued to work there with my Mum and us when we were kids. We helped out where we could, clearing tables, pot washing, you name it, until they trusted me to start making pies!”

Despite its traditions, things are always changing at Goddards. After Jeff’s father passed away, there was a decision to be made. “My Mum was probably in her 50s, nearing retirement. I was 20, my brother was 18 and we were thinking: ‘What do we do?’ We decided we wanted to keep it going. So we picked up the mantle in 1990.”

The shop itself is situated just down the road from the original, but it still has that traditional atmosphere. Having once been a pub, the decor certainly helps keeps the British feel of pie and mash meal.

The second you go in you are hit by that beautiful aroma of puff pastry and liqueur, something I had not tried until that day. The big, old-school wooden tables and paintings on the wall help give the place the look and feel of a family-owned place. It felt homely; lovely.

As the food landscape in the capital is changing, pie and mash is not the staple it once was. People’s dietary choices have changed dramatically since Goddards opened its doors. V

Vegetarian and vegan options are more popular than ever and with it currently being Veganuary, it is a growing trend, that even I am taking part in. Replaced by kebabs, coffee shops and a huge range of meat free alternative, some people see pie shops as outdated.

How wrong they are.

Jeff talked me through their range of pies, pointing out the ‘Banks’ Soya Pie’ as one of his best sellers: “If you have a big family come in and one of them doesn’t eat meat they’ll just leave and go find somewhere that they can eat. You can’t afford to lose business like that. We’ve had to change with the times, we do a pie for everybody.”

The price is not bad either. Although you tend to feel like you are constantly overpaying for food in London, somehow I felt I was underpaying here. “Our big selling point is its good honest tasty food at a good price. Part of the reason we’re busy is the prices are good and we will maintain that as long as I’m about,” Jeff told me.

Soft on the bottom, puffy on top, with just enough crunch, it is fair to say after 130 years, the Goddards know their way around a pie. The soya pie was the closest thing to real meat that I have tasted since I last ate, well, real meat; soft and chewy enough for it to be the real thing.

It was also the first time I have ever had liqueur. At first it looked a bit sinister, bright green all over the pie and mash; I was sceptical, but I changed my mind quick. It helped add a lovely creamy texture to the meal. I do not know why I am surprised to be honest, as I have said, this lot know exactly what they are doing.

Jeff talked me through the history of the ‘Banks’ Soya Pie’ and I was somewhat surprised to learn it is nothing recent. They have not jumped on the Veganuary bandwagon that has popped up over the last few years, in fact they have been doing it a lot longer.

“We’ve been doing the vegan soya pie since 2001 actually. So the pie isn’t a new thing. There was an MP called Tony Banks and when we were under the threat of compulsory purchase he came down to the shop and was telling us about how he had grown up on pie and mash,” Jeff explained.

“But he’d become a vegetarian and he said, ‘Oh, it would be nice if you did a veggie option but beef tasting’. So because he helped us out by getting the building grade two listed, we decided to honour him by naming it ‘Banks’ Pie’. 19 years later we’re still selling that pie,” he continued. 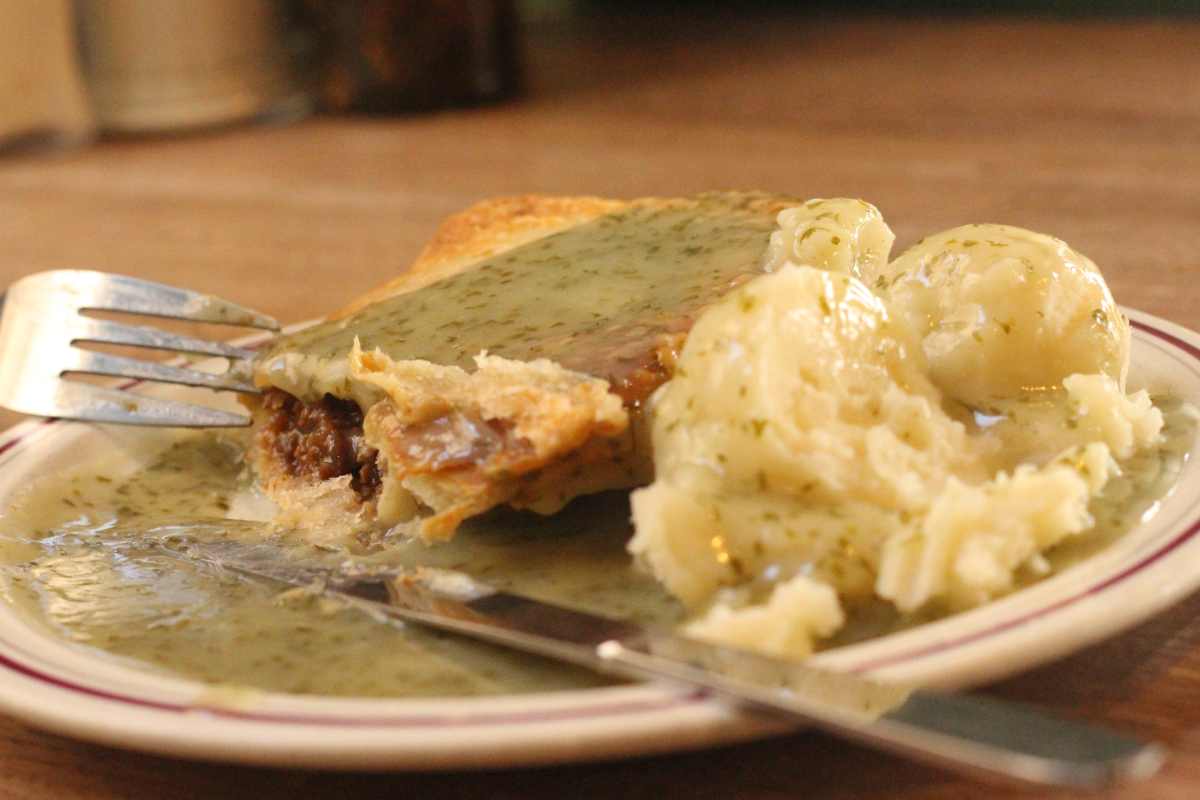 It is good to see the traditional roots of the shop coupled with today’s changing food culture. “I think the range of pies we’ve got has really helped us to prosper as a business. I know for a fact if we hadn’t made those changes then we would be struggling because people’s dietary needs have changed so much.

“We have a core ethos that we stick to but we’re happy to change with the times. But we don’t want to forget where we came from. Sometimes less is more.”

One of my favourite things about Goddards, apart from the food, was the way Jeff talked about his customers. He was not only welcoming of everyone but loves the range of people that come in to try Goddards’ traditional British cuisine.

“It’s a huge misconception that it’s food for old people. We get so many families and young people in here, we have days where I struggle to get all the baby buggies in here, and little babies sit here eating their first bit of mash and liqueur, that merry go round of father to son, mother to daughter will always continue,” Jeff said smiling.

Looking around the lunchtime rush I could see what he meant; every table was different. Amongst families, workers and tourists, there was an eclectic mix. “I just can’t see a reason why people won’t always gravitate to pie and mash,” said Jeff.

“It’s so established, it’s not super fashionable, but it is good honest food, and as long as we get it out for a good price, to a good quality I can’t see it failing. There’s no reason why in another 125 years someone won’t be sitting here talking about 250 years of Goddards!”

Although I am somewhat of an inexperienced pie and mash customer, I agree with Jeff. In today’s rapidly changing food market, it is nice to see such an old business thriving and changing its ways to suit today’s customer needs but simultaneously sticking to its roots.

I might not be around in 2135, but I certainly hope they are still serving up pie, mash and liqueur to Londoners right here in Greenwich.

All images by Oliver Goodwin.