It’s clear that Britain’s streets no longer have the variety of sub-cultures that they once had in the 1960s and 1980s. The voluminous hair of punks and Cure-inspired goths are rarer than they used to be, but they are far from dead.

When we think of sub-cultures, our first thoughts tend to lead us to images of garish, intimidating, anarchist youths; they always tended to have some kind of political background – put simply, for punks it was anti-establishment; for goths, existentialism.

Although punks and goths may be the front runners, skinheads also burnt a definitive path in our cultural history. After becoming known for their racism and football hooliganism, the sub-culture started to die, however, they didn’t start off with discriminatory beliefs and actions.

[pullquote align=”right”]“If they don’t like the music then it’s like, what you doing? You’re just kind of hanging around, dressed up all different.”[/pullquote]Skinheads awoke in the 1960s as a working-class sub-culture. Shaven heads, steel toe-capped work boots, braces, straight-leg jeans and check shirts defined the iconic fashion. It was a movement in response the perceived neglect of the working class, and as a result, people grouped together to spurn austerity and conservatism.

Music is probably equal, if not a greater factor, in defining a skinhead than fashion. Ska, 2 Tone and Oi! are the essential genres, with ska and 2 Tone heavily influenced by Jamaican music, and Oi! diverging from punk rock. Their fashion and music were influenced by mods and rude boys, and as punk came along it was also involved in the style and music.

James Lissimore, a 21 year old student says that, for him, it was the music that made him want to be a skinhead: “If you don’t listen to the music you’re just dressing up like a costume really, you don’t have to dress completely right by the book to be classed as skinhead or anything. I mean it helps to have, like, a shaved head or a feather cut but I don’t think you need to be.

“And a lot of people say that you do but I think they’re just kind of gatekeeping and the more people in the sub-culture the better because it takes guts to shave your head and get a hard haircut. Especially with the conversations there are today. But yeah, the music is the most important part. Because if they don’t like the music then it’s like what you doing? You’re just kind of hanging around, dressed up all different.” 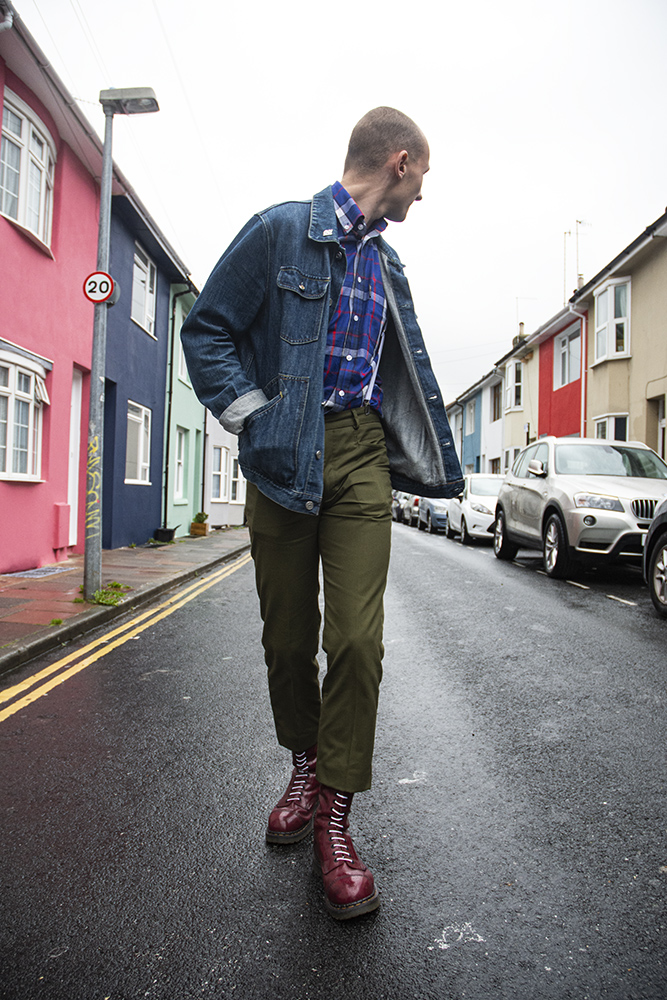 The racist reputation of skinheads is what they are most known for today. It was the second wave of skinheads which gave them this reputation. With the British National Front losing support in the 1970s, they turned to skinheads for support, and so began their decline in notoriety. Of course, many skinheads remained apolitical or left-leaning, which is why Skinheads Against Racial Prejudice (SHARPs) was formed.

SHARPs appeared in 1986 as a response to the rise of white nationalism in the second wave of skinheads. Having started in America, and soon spreading to Europe, the aim of SHARPs was to not only fight discrimination, but also to show that not all skinheads shared the same political views.

Although the music genre Oi! is not inherently racist, it has always attracted skinheads with alt-right leaning views. In 1981, a clash between South Asian youths and skinheads resulted in the destruction of the Hambrough Tavern, 110 people were injured and dozens were arrested in an incident which became known as the Southall Riots.

Several Oi! bands were set to play at the Hambrough Tavern in West London when, during the gig, South Asian youths threw petrol bombs and bricks at the venue. It was a response to various racially-motivated attacks their community had faced prior to the gig. When word travelled through Southall that groups of skinheads had been targeting Asian shopkeepers on their way to the venue, the Southall Youth Movement decided to retaliate. Oi! music was subsequently banned by Margaret Thatcher.

“I separate my politics from it all because otherwise, it gets all a bit complicated; people think that it’s what it’s all about, but it ain’t. The best way to enjoy the scene is to separate the politics from it. Even being moderate left, you start to find yourself falling into a crowd of the wrong people,” said James. 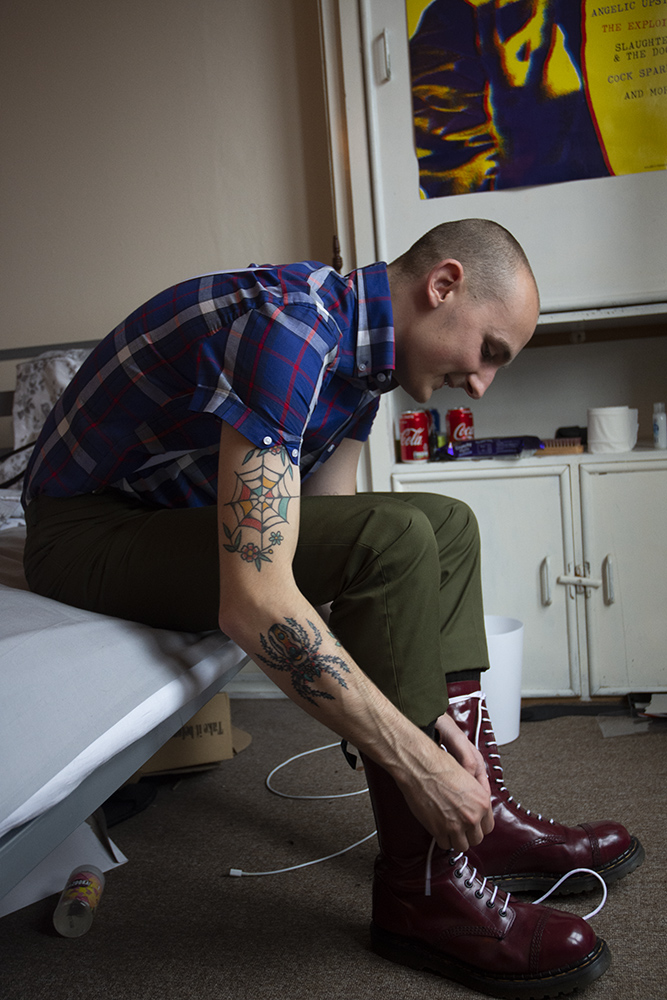 As with many things in society, sub-cultures have been subject to change, whether its political ideology, style or music. For skinheads, the style and ideology were very much tied together. The reason they wore the clothes they did was because of the practicality of it being smart workwear. Since the emergence of skinheads, a lot has changed in the way of societal class. What was once accessible for those with a smaller budget is no longer that way. The tall steel toe boots, a skinhead staple, have increased in price dramatically.

Doc Martens was the main brand of boots worn not just by skinheads, but also those in other grunge and/or alternative style circles. They were sold to many factory workers as durable, long-lasting footwear. Coupled with a huge fall in sales in the early 2000s and the cost of manufacturing shoes in England becoming more expensive, they moved production to Asia. Since the 1990s, the reputation of Doc Martens has fallen considerably, many people have said that they are nowhere near the quality they once were.

With modern Doc Martins becoming increasingly expensive and unreliable, it’s hard to see them being worn by a group whose style is based on affordable, long-lasting workwear. So, how do skinheads dress now that times have changed?

The best way to get skinhead clothes is to buy them second hand, according to James. Brutas, Britac, Fred Perry, Warrior and Ben Sherman are the main brands to look out for, other newer brands like Real Hoxton are cheaper and more accessible. Solovair, the original manufacturers of Doc Martens, still make the traditional boots, but a new pair would set you back £180 now.

James describes it as a timeless look: “There’s no point if it’s a competition, some people are complete elitists with it and complain if your laces are the wrong colour, or your hair’s too short, hair’s too long, or whatever, if your braces are too wide. Then it starts getting a bit annoying. I think you should just do what you want to do.”

Lace code was another arguably large part of the sub-culture. It was an unspoken language of communicating political affiliations through the colour of laces on shoes and boots started by the alternative scenes. As with many unspoken languages, there’s much confusion around lace code. Different areas of the country and different groups of people associated the colours of laces with different things. For example, some people believed red laces to mean the wearer had Nazi affiliations, while others thought it meant Communist tendancies.

Since the 1980s, lace code has pretty much died out, but recently it’s being spoken about again, mainly between alternative communities on the social media platform TikTok. The hashtag lace code has 8.2 million views on TikTok, which demonstrates the reach this revived topic has had on users.

It’s possible that we may start seeing more of lace code in popular culture. While it could be argued that this is a good thing as it lets people know who to avoid, it’s already been proven in the past to result in more confusion, rather than a demonstration of political allegiances.

The worldwide scene of skinheads is larger than one might anticipate, although there have been significant changes since its first appearance, it still has a lot of representation. With the help of the internet, it’s harder than ever to remain ignorant and uneducated. With this in mind, current and future skinheads may create a less racist world for us to live in.