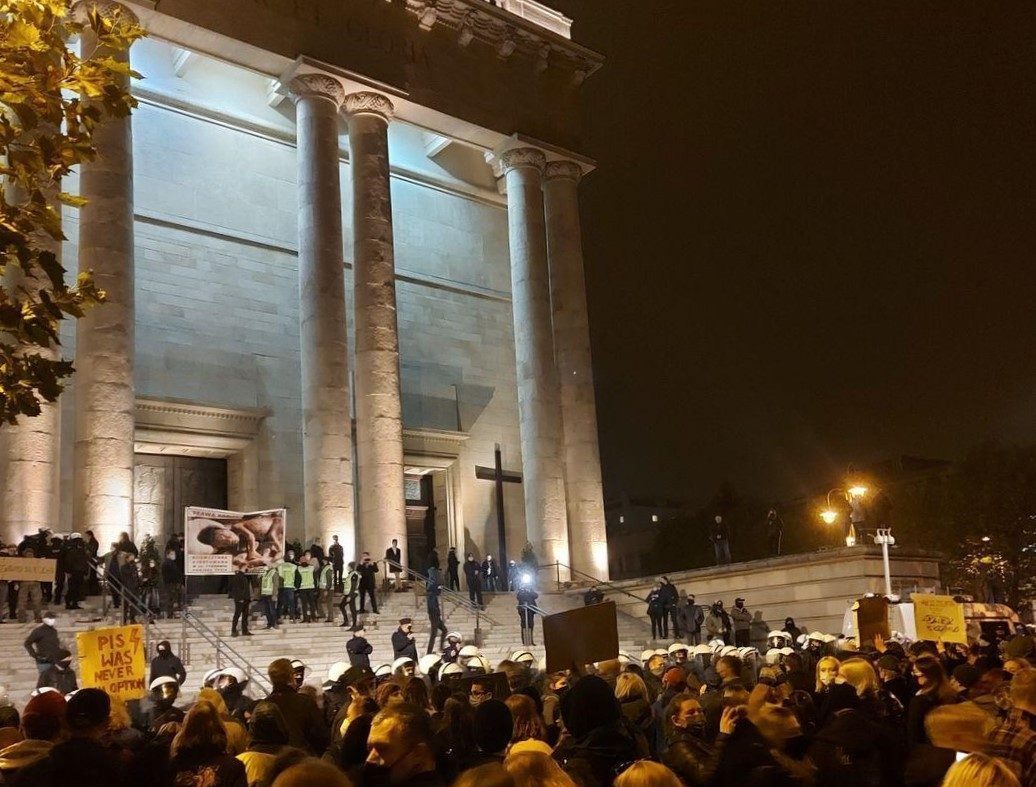 On October 22, the Constitutional Court in Poland ruled abortion in case of foetal defects was illegal, supporting the view of right-wing political forces and the Catholic Church; Poland joined Malta and Vatican on the list of countries with the strictest anti-abortion regulations in the world.

On November 2, Polish president Andrzej Duda submitted his own proposal regarding the new anti-abortion law that would allow abortion in SOME foetal malformation cases. The government and the president are now debating on which version of the law would be satisfactory for everyone.

The court’s near-total ban on abortion started a wave of protest in various cities not only across the country, but all around the world.

From October 22, the movement grew steadily, with more cities appearing on the protest’s map. These manifestations took place not only in the biggest cities in Poland but also in small, more conservative towns. For many, these were the first pro-abortion marches in their town’s history.

In theory, the new law bans only one of three possible cases of legal abortion, but in practice it reduces the number of abortions in Poland by 98%.

“The government is insulting women and with the new regulations that turns women into incubators.”

In 2019, 1,110 legal abortions were carried out in Poland – more than 98% of them were because of defects in the foetus, while 33 were because the woman’s life was in danger and only three as a consequence of rape.

The disagreement with the new regulations was so severe, that people with differing, sometimes opposite, political views united to join the protests. A lot of those who voted for Poland’s Law and Justice party (PiS) in the last parliamentary elections and for Andrzej Duda in the last presidential elections decided to support the strike.

Kinga Duda, the president’s daughter, remained silent after the new law had been introduced until she was called out publicly to give an opinion about the strikes taking place in Poland.

In a statement published on Twitter on October 28, she said that women should have the right to decide about their own bodies and be able to choose whether to terminate the pregnancy or not, because they are the ones who would have to face the consequences of their decisions and live with it until they die.

She also said that the previous abortion regulations, valid for the past 27 years, were a stable compromise between the pro-life and pro-abortion movements and although not ideal, gave women a choice, while the new law leaves them with no choice.

Many young women, who plan to become mothers in the future, agreed with the president’s daughter: “As a young woman and a student I can only say that I’m deeply sad about everything that is happening in Poland right now, especially about the Kaczyński’s proclamation. In terms of pandemic, I’m curious how many people will suffer from mental health issues due to the current situation. And the government couldn’t care less about the protesters,” said Marta, 21.

People protesting against the new anti-abortion laws in front of the theatre house in Katowice, Poland [Zuzanna Kozłowska]

“I am furious and petrified at the same time. I am also very happy to see so many people taking part in the protests and that they rally to the same cause. Taking part in a protest gave me a lot of strength and hope that maybe, soon, something will actually change,” 21 year-old Patrycja told us.

“I think that the fundamental rights to decide about our bodies had been taken away from us today. The government is insulting women and with the new regulations that turns women into incubators. I think that living in Poland isn’t safe for us anymore,” said Zuzia, 22.

To hide real numbers of protesters, journalists from national TV stations shot their content either at the very beginning or at the very end of the protests, never at its peak. Descriptions of what was happening there were biased towards the conservatives: “Left-wing fanatics are attacking the Church”, “a crowd of crazy feminists wants to destroy churches”, “left-wing extremists are ruining Poland” were only a few lines used by TV Poland (TVP) reporters to describe the peaceful protests.

“Everyone should be able to decide for themselves. The Church cannot tell anyone what to do!”

Photos and videos presented on television were far different from those on various social media platforms.Many people were confused and did not know which side of the conflict to support.

“Honestly, I don’t have a clear opinion on that. I can’t even imagine being in a situation of making such a difficult and complex choice. The way media portray the protests makes it impossible for me to support any of the sides. The amount of misinformation, hatred, and offensive statements from politicians towards one another only convinces me that media are here to divide people and make people hate each other even more,” said Paweł, a 22 year-old law student

On October 30, when protests were at their peak, more than 100,000 people took part in the main demonstrations in Warsaw, whilst smaller protests took place all over the country. After prime minister Jaroslaw Kaczyński’s proclamation on Wednesday, the general public was even more determined to carry on protesting

The leader of PiS political party said that those who take part in the protests are “committing a crime against common safety”, and that “Polish churches and Polish patriotism must be protected no matter the cost”.

The picture that the national media paints are that of “angry feminists” – in reality, the people protesting are Catholics, men, mothers, and those who, personally, may not choose to have an abortion. What they have in common is that they believe in having the right to make decisions on their own lives.

“I support the protesters from the bottom of my heart, and I am really sorry that I can’t take part in them because of the baby. I can’t even imagine how I would feel being pregnant and knowing that I will give birth to a disabled or even dead child. I was raised in a catholic family, but in my opinion, everyone should be able to decide for themselves. The Church cannot tell anyone what to do! We, people with free will should be able to decide what to do in such an extreme case as abortion- because no one actually understands what it means until you get to experience it on your own skin,” said the mother of a new-born baby living in London.

Although hundreds of thousands of people are protesting on the streets against the new regulations, religious and conservative groups welcomed the restriction with open arms.

“I am pro-life. I’m always on the side of life. Now, the judgement of the Constitutional Court, a tightening of the statue, is still to be enacted into law. By far the best outcome in this matter would be to specify exactly what should be forbidden,” said Kamil, a 20 year-old PiS voter.

“For instance, the killing of children is for me a criminal act, and each woman who desires this should be punished, as is typically the case for murder. Otherwise, this means the certain death of a child just like certain illnesses, which lead to the death of a child a few hours after its birth.

“In what sense are the children guilty, how are they at fault? And even if the mother disagrees. It is worth giving birth to the child and then handing it over. There are thousands of families who would welcome such consolation as they are unable to have their own.” 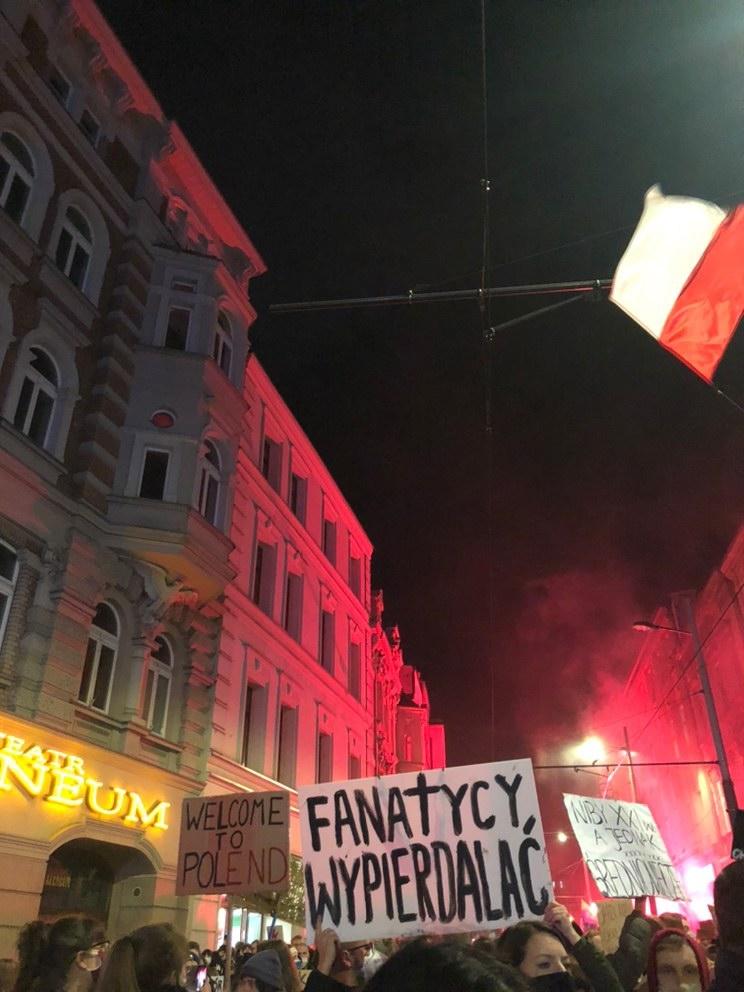 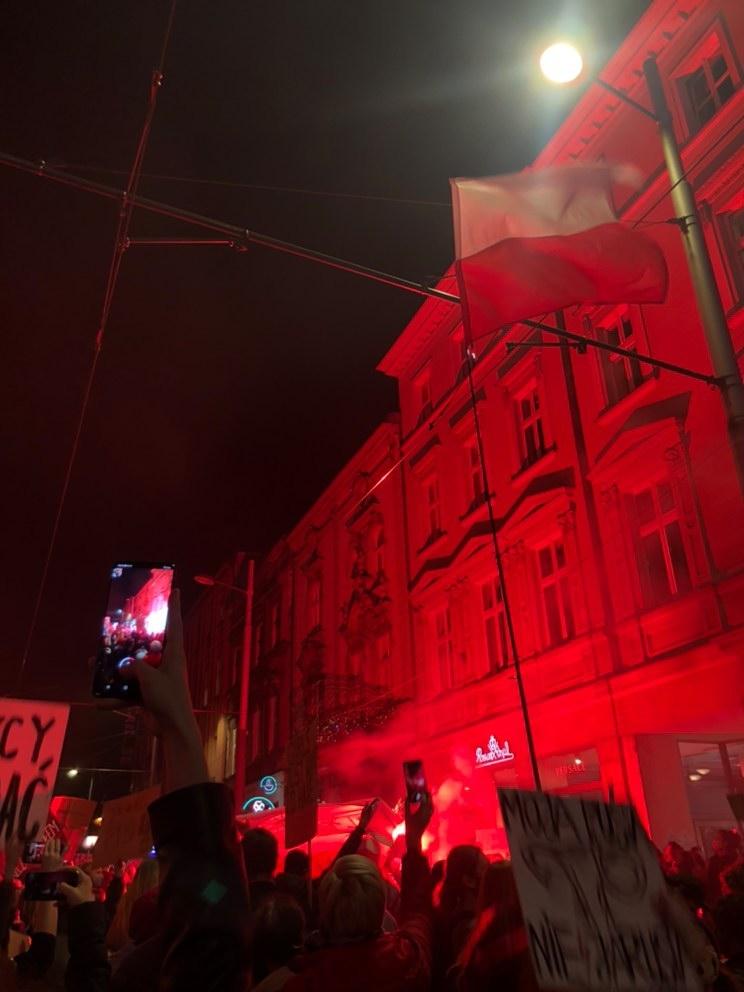 Red flares were used by the protesters in response to the pepper spray used by the police24/10/2020 Katowice, Poland [Zuzanna Kozłowska] 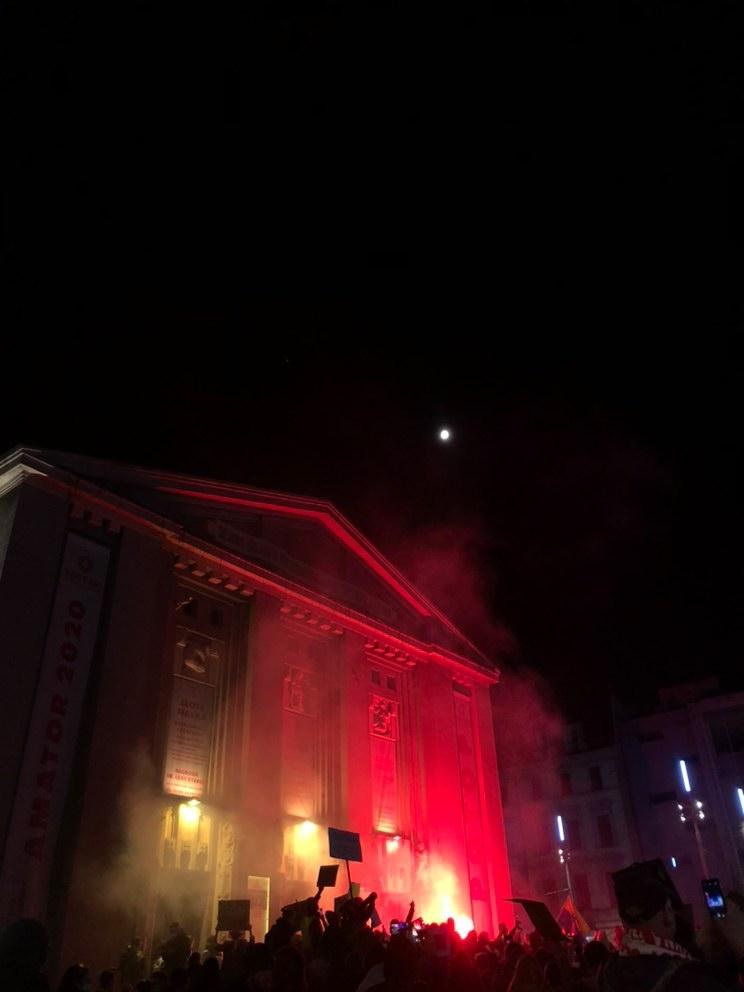 Thousands of people with banners and red flares protesting against the new anti-abortion regulations in front of a theatre house in Katowice, Poland [Zuzanna Kozłowska]

Footage from the protests went viral on Instagram. Unedited, amateur videos and photos were shared thousands of times, including celebrity support.

Model and educator Anja Rubik ran an educational campaign on how to prepare for the  protest in a Covid-19 friendly way, what to do if one gets arrested, and also gathered a group of lawyers from around the country who offered their help pro bono.

The protests in Poland caught the attention of various international stars including NikkieTutorials (a beauty guru), Elisabeth Rioux (CEO of Hoaka Swimwear), Dua Lipa, and Miley Cyrus (singers), who expressed their support for the protests on Instagram:

Restricting the abortion law is one more factor to consider for Poles living abroad before moving back to their home country. Many Polish people around the world decided to protest in front of their local Polish embassies and consulates. The biggest of these protests took place in London, New York, Chicago, Barcelona, and Berlin.

Those who live abroad and cannot attend protests in Poland are concerned about the future of their country: “Although I don’t live in Poland anymore, I won’t ever accept the infringement of human rights, the visible discrimination, and hatred! We must show our solidarity and inner fury,” said Julia, a fashion management student living in London.

Those Poles who live in cities with no protests feel helpless: “Our government is again showing ignorance by changing abortion laws in the middle of the pandemic, with daily Covid-19 cases over 10,000. What the government has done resulted in protests in many cities, and I’m very proud of every person who supports the national strike. No one deserves to live in a country that disrespects its own citizens, ignores global issues, and is controlled by white old men and ‘the Church’. Nevertheless, seeing very little international media coverage on that topic is not what I expected, especially when it’s all about fundamental human rights,” one protestor told us.

The most frequently asked questions in Poland now are “what’s going to happen next?” and “who will stop the government from taking Poland back to the Middle Ages?”. No one seems to know how to answer those queries.

For the Poles who feel that they cannot count on their own government and who seek help from abroad (from the European Union and the NGOs campaigning for human rights) the protestors in Poland feel it is very important that the public knows about what is happening in Poland and should be asked to support the movement.

What foreigners can do to support the protesters in Poland: spread the message via social media channels, sign the Amnesty International petition or donate to the pro-abortion organisations, campaigners said.