Probably not a term you’ve come across before but it’s a significant – and hidden – business in the fashion industry right now!

But what does it mean? AJ, a London based student, who does it for a living and wishes to remain anonymous, tells me it “means I need to observe people, to find and predict new styles and trends for the upcoming seasons. A ‘cool hunter’ is a person who is employed to identify future trends.”

The cool hunter spoke to me on condition that their identity and employer not be named as they are still employed in this position. Which raises the question; if the job really is only about predicting new trends, why would people be guarded about who they work for? Is it as ethical as they make it seem? 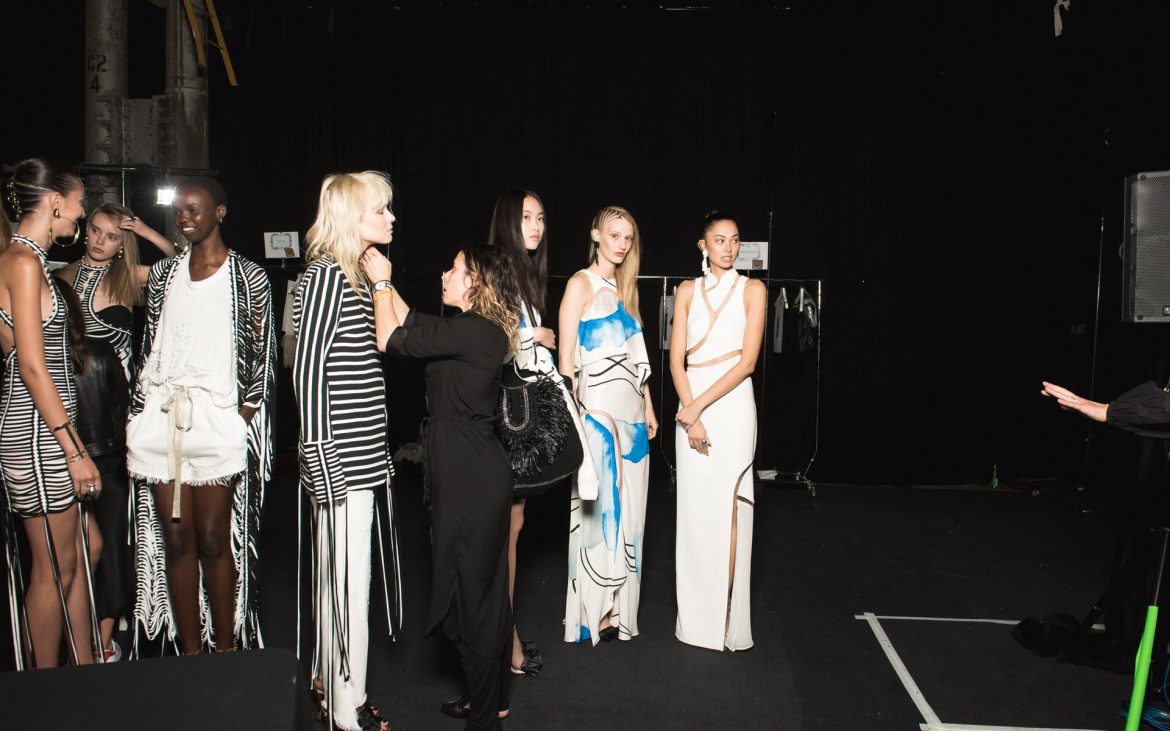 Fashion weeks across the world, from London to New York, are eagerly awaited by all in the industry, and no less so by cool hunters who scan the runways for ‘inspiration’. Weeks later, near-identical “dupes” from the latest runways find themselves in fast fashion retailers such as Zara and Topshop; who can recreate low budget, ‘inspired’ pieces.

Online-only brands like PrettyLittleThing and Missguided also participate in this regularly. If you see something you like on the catwalk, its often not too difficult to find a cheaper duplicate online a few weeks later.

“I was rubbed the wrong way by their lack of ethics and blatant disrespect for creatives that it left me feeling bitter.”

We see influencers quickly following suit, taking the opportunity to promote (often sponsored) content to their audiences. Videos such as Hailey Bieber style on a budget | Missguided styling haul by Youtuber Sarah Ashcroft, provide a blueprint for fans to copy the high-end style of their favourite celebrities.

Ranging from designers and catwalks at the top of the fashion world to the micro-influencers at the bottom – cool hunting has proved to be a big business and a costly one for the brands. As Business Insider reported in July 2019, Kim Kardashian successfully sued Missguided for “knocking off her clothes” and won $2.7 million (£2.1m).

Offering low-cost versions of clothes inspired by high-end fashion catwalks is, in fact, the commercial vocation of fast fashion brands. However, between ‘inspiration’ and ‘pedestrian copy’, there is a huge difference. These brands have a tendency to satisfy the fashion ambitions of their customers by bringing them items that are not only inspired by the leading designers of right now; they are an exact copy. 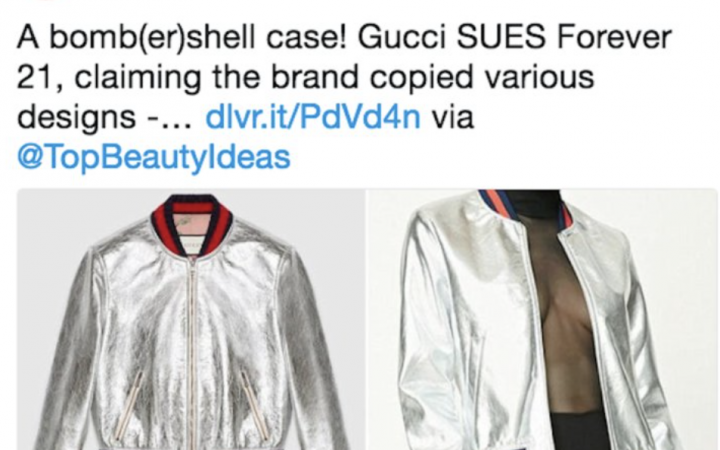 AJ tells me she “observes what and who surround her for inspiration” as well as social media such as Instagram or Pinterest, which she claims are also significant sources for inspiration.

Paulina, a journalist student who once worked for the same company as AJ, was the victim of a “cool-hunting job” herself: “I don’t think people realise how fast-fashion clothing companies work. After working in this shop for over a year, I was rubbed the wrong way by their lack of ethics and blatant disrespect for creatives that it left me feeling bitter, which is a shame as there is so much potential there but all they are doing is chasing money.”

Paulina recalls she found out “quite comically, as a colleague and I were unboxing new arrivals. She picked up a new item and started laughing and told me to turn around. At first, I couldn’t understand what was so funny, but she turned the T-shirt to face me, and I realised she wanted me to turn so she could see the tattoo I had on the back of my arm. It was essentially the same design, manipulated a bit but the same design. 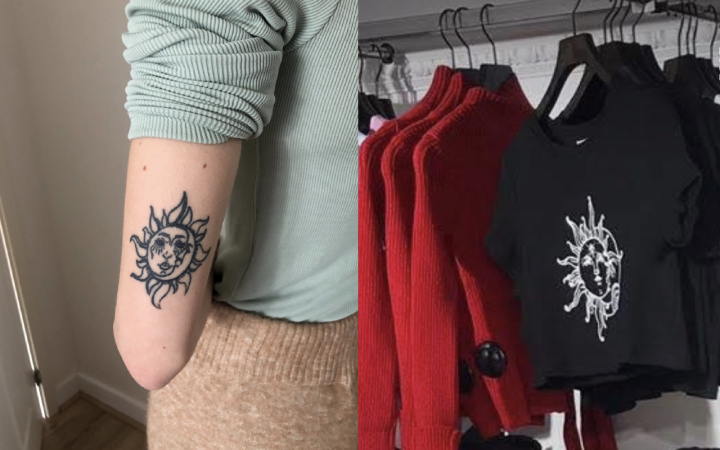 “At first, we had a good laugh about the situation. But the more I thought about it over time, the more used I felt. Especially because I hated how the design of my tattoo was depicted on the clothes. Every time I saw it, it just ended up making me question my decision to have this tattoo, it almost lost its value to me.”

So, it is not just clothes designers that fall victim to cool hunters’ “inspiration”. Katie, a tattoo artist at Vaporwave Tattoo studio in Shoreditch, told us: “I feel really disappointed at the thought that people don’t respect tattoo artists’ work and think it isn’t valuable. If something of the sort happened to a tattoo I designed, I would definitely contact the company and ask them to either pay me or stop using the design. I love all my tattoo designs, and, in my eyes, it would not lose value, but I understand why Paulina feels this way.”

Paulina remembers that around a month before the infamous “tattoo T-shirt” got printed and was available for purchase, one of the owners of the company came to visit the store. “She was taking photographs of the displays and sneaking pictures of outfits that customers were wearing for ‘inspiration’. I knew she was also taking pictures of me, but I figured it was to show the team which clothes I was wearing as my work uniform, as we had to wear pieces from the shop floor.”

“Very often, I do feel like I am doing unethical things, especially when I’m taking pictures of random people on the street.”

She added: “I have thought about taking legal actions against them or at least to bring it up to someone in the heat of the moment but quickly realised that, sadly, I don’t have any ownership of the design. The idea of claiming they stole it off my body seems preposterous and dramatic. I designed my tattoo with the help of an artist, but the inspiration came from outside sources. I guess my issue is not that they used the design, but how they went about doing it.”

According to AJ, the average salary for a cool hunter is around £21,000 per year for a starting position. With a lucrative sum for a job that virtually only requires an eye for trends rather than any design ability.

As of 2020, the London College of Fashion doesn’t offer any degrees in ‘cool hunting’, and there is no apparent qualification needed to become one, other than being “cool” enough to be recruited, of course. “I started as a sale assistant. After six months, I received an offer to become a cool hunter because they liked my style a lot,” AJ told us.

“I watched as the design team blatantly ripped off items of clothing from the company’s competitors. Sometimes it was legitimately just shameful copies of items they know sold well and designs which belong to other companies. The whole practice is a “f*ck you” to real designers who come up with innovative concepts and styles,” Paulina said.

The fashion industry is not protected by the same copyright laws as other creative industries such as the arts, film, and literature are. In the UK, designs are, in fact, able to be protected by copyright laws but here’s the catch; said designs must be completely new and not an adaptation or inspiration from a previous creation, leaving us with little or nothing to work with.

Recent cases to pass through the UK’s judicial system have been big brands like Vivienne Westwood with trademark concerns, such as buttons, colour-ways and patterns that had been previously trademarked.

To put it simply, we can’t expect tattoo artists to trademark all their work, it would be impossible. Also, we are unable to just trademark our existence in case a ‘cool hunter’ is around and ready to steal the design of the jumper your grandma knitted for Christmas in 2015.

AJ says her typical day at work is “walking around London, especially in places where teenagers tend to hang out, as the brand has a target audience of ‘cool’ girls in their teens. I look, take pictures of the coolest girls and coolest outfits to then inspire new ideas. I also change the outfits of the mannequins once a week.” She does have reservations though telling me “very often, I do feel like I am doing unethical things, especially when I’m taking pictures of random people on the street”.

When asked if she deemed a position like hers necessary in today’s fashion industry, AJ said “a cool hunter is like a ‘messenger’ between the consumers’ need and the producers’ attempt of creating distinctive goods. And in order to reduce mass-market production, having these kind of positions in a fashion brand is a solution as it helps to choose the right item to produce.”

In today’s society, pretty much everything is only one click away from us, whether it be information, inspiration or goods. We can’t expect brands and designers to come up with innovative and game-changing ideas all the time, but blatant copies are where the lines start to become blurred.

The creation and growth of positions like ‘cool hunter’ only leads to a fundamental question: are we running out of ideas?