Protests and demonstrations are nothing new. However, in recent years, advocating and demonstrating has advanced by using the internet as a way to spread messages further- mostly through the use of hashtags.

A recent hashtag that has risen to prominence is the #BlackLivesMatter movement. Commonly known as BLM, the movement was founded in 2013 following the acquittal of George Zimmerman in the 2012 shooting of Trayvon Martin, which occurred in Sanford, Florida.

The hashtag was created to draw attention to the importance of black lives as those in positions of power did not appear to recognise this. The movement has since become a form of advocacy against police brutality towards black people, given the disproportionate killing of black civilians by white police officers in the USA, as well as a strategy for tackling institutionalised racism.

Although Zimmerman was not a part of the police force, he was a community watch captain, which placed him in a position of power over Martin. Since then, the organisation has transcended national borders to become a global movement largely in places such as Canada and the UK. 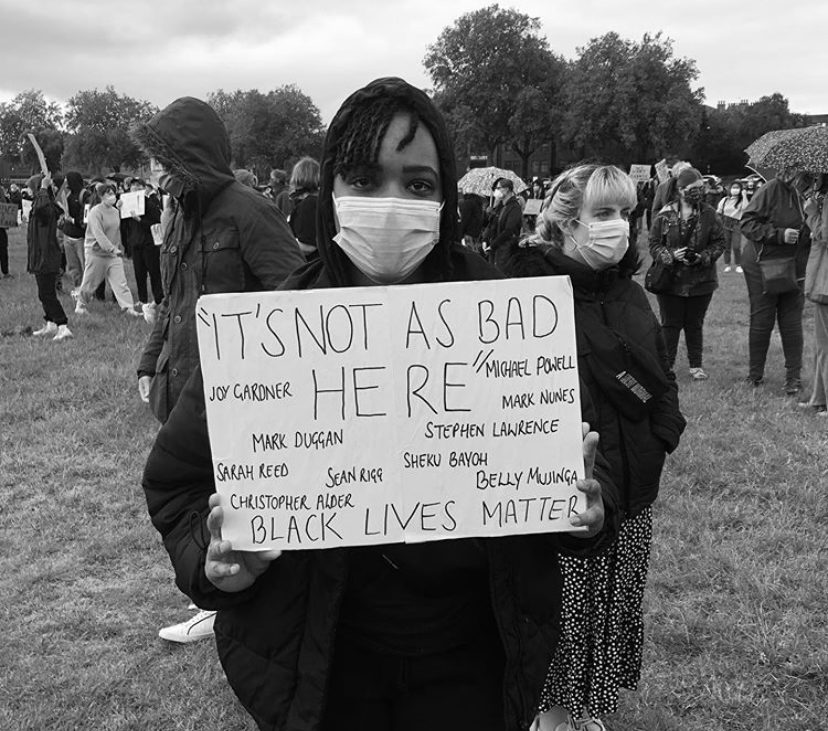 Generally, Black Lives Matter as a movement provides the opportunity for individuals to document their lived experiences of racial discrimination, victimisation and violence via social media through tools such as Facebook live and Instagram live.

It allows users to broadcast live from their own personal devices to a wider audience, drawing attention to the frequent occurrence of acts of injustice against black civilians, especially those perpetrated by white police officers.

According to the official Black Lives Matter Global Network Foundation, they “are working for a world where Black lives are no longer systematically targeted for demise”. As a global movement, Black Lives Matter protesters largely target and focus on rejecting and calling out systemic racism, particularly within the Western world where black people are often the minority.

In this way, #BlackLiveMatter is often utilised in a racial context which as a result often neglects to pay attention to the Black lives being lost in other parts of the world, as a result of police brutality.

Another movement which has sought to draw attention to issues of police brutality in a developing world recently is #ENDSARS. This is a movement that demands the deactivation of a specialised unit created by the Nigerian government called the Special Anti-Robbery Squad (SARS). It was created in 1984 in response to a sharp rise of violent crimes such as kidnappings, robberies, carjacking and murders of civilians in Nigeria.

The police officers operating within this unit, however, have been accused in recent years of being the ones committing the same kinds of crimes that they were originally selected and designated to put to a stop. The unit is accused of specifically targeting younger citizens, who appear to be affluent, and have particularly valuable items such as iPhones, watches, expensive clothing or new cars. 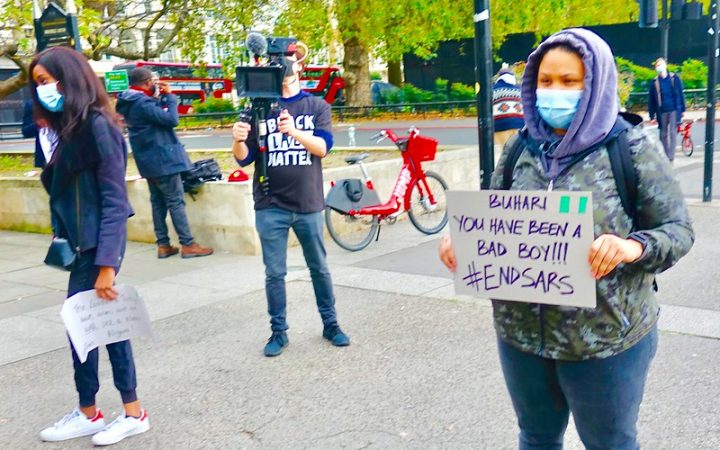 The hashtag was created in 2017 by protesters using Twitter. The protest erupted again in October 2020 following a video from October 3 that showed the unprovoked killing of a man by SARS officers in Ughelli, a town in southern Delta state.

The video went viral on several social media platforms which incited a response from Nigerian officials, who claimed the video was fake and arrested the person who had filmed it, provoking more anger amongst citizens.

This led to mass demonstrations throughout Nigeria and expanded globally to places such as the USA, the UK and other parts of Europe resulting in the hashtag rising once again.

Following on from this, citizens in Nigeria employed similar tactics as those in the US and the UK relating to #BlackLivesMatter. They used social media apps as tools to broadcast and showcase the violence and crimes being committed by those in power.

On October 20, 2020 the protests, which had largely been peaceful for many weeks turned deadly, after Nigerian police officers and soldiers had fired at protesters, an occurrence which was broadcasted on the global stage through Facebook live, Instagram live, Twitter and the sharing of images from the catastrophic scene.

Many went on social media to express their pain and support for the protesters and the reoccurring statement about how those that are in support of the BLM movement should also be advocating for #ENDSARS as those are Black lives as well. 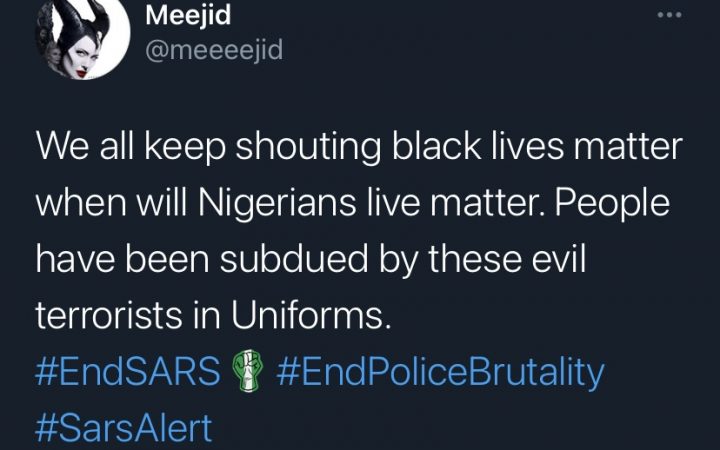 One Twitter user took to the platform saying: “We all keep shouting black lives matter when will Nigerians live matter. People have been subdued by these evil terrorists in Uniforms.” He added the hashtags #ENDSARS #EndPoliceBrutality #SarsAlert.

One Briton who’s of Nigerian heritage, 29 year-old Fola Adeoye, shared his experiences of being targeted by police officers in both the UK and Nigeria. Fola told of how he visited Nigeria at the age of 19, describing how his father had allowed him and his cousin who was a couple of years older than him to drive a brand-new Mitsubishi 4×4 around the local town.

“I remember going back home as a youngster, being in the car with my cousin and being stopped and being asked, ‘Oga anything for me?'” It was a request from the officer for money as a bribe to allow the car to leave. Sharing further detail Fola remembers the officer “keeping his hand on the gun in his holster, he clearly wanted us to know he’d draw it out, [the question from the officer] wasn’t a question, we didn’t have a choice but to pay him.”

Fola however, reiterated how lucky they were, to have an aunt who is married to a high-ranking officer in the Army, and that the mention of that name and his association to him “carried weight with that officer and they saluted us and let us pass”. As Fola admitted, that kind of behaviour is not uncommon within the country: “That’s how corrupt it is, so imagine what it’s like for those without a name or a connection?”

While Fola’s experience was particularly frightening, occurring in a country that was to a degree, foreign to him, the encounter with a police officer in Nigeria was very similar to what he had experienced in the UK.

Born and raised in South London, Fola spoke openly about his regular encounters with police officers and being questioned regularly about his possessions:  “I’m a black man, and I drive an ‘18 plate Mercedes, getting stopped by the police is nothing new to me.” Fola recalled that the line of questioning was the same from officers both in Nigeria and in the UK “the first thing they always ask me is, what I do?”

An advocate for the Black Lives Matter movement in the UK, Alika Samuels, echoed similar acts of racism and prejudice against black people within the UK, particularly by the police: “The issue is there’s a presumption that the only way that black people can afford nice things is through crime and illegal means.” 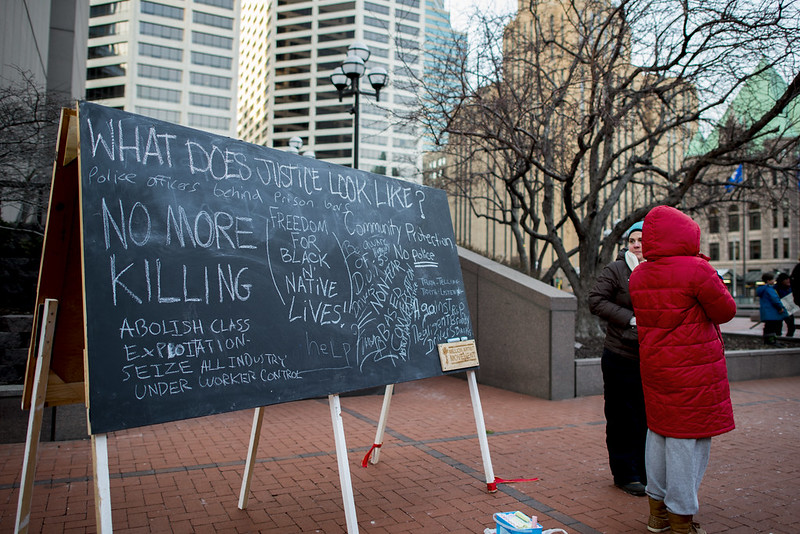 Some protestors in Minnesota used a blackboard to detail what the Black Lives Matter movements means [Flickr: Fibonacci Blue]

Similarly, Nigerian citizen and resident Precious Okoro’s description of SARS’ actions show that they are characterised by similar bias as they often perceive that items which hold value are attained “by doing yahoo yahoo” the word ‘yahoo’ referring to money made through fraudulent means.

Precious acknowledges that of course, people who make money through illegal means also exist, but this doesn’t warrant the degree to which police officers violently attack civilians, as this happens disproportionately.

Nigeria has a population of more than 200 million, the largest in Africa, according to the World Population Review. Along with this large number of inhabitants, the country has a fairly young population as the average age for both men and women is 18.4 years. Nigeria also has the highest GDP per capita, making it one of the wealthiest countries on the continent. As a result it is possible to infer that the bias and discriminations that the average Nigerian citizen receives from police are due to institutional prejudice.

These two movements have many disparities, ranging from culture and language to economic development, but the population seeks to draw attention to black people.

There are also similarities in both movements which point to black people suffering violence as perpetrated by the people who are in positions of power, or those who have been appointed to protect and save lives but who, sadly, are doing the opposite of that very act and duty.

#ENDSARS is an extension of the #BlackLivesMatter movement, like the issues, experience, and the realities of the people that the two movements advocate for are the same.

Black Lives Matter as a global movement is well-positioned to promote #ENDSARS and helps dismantle the institutions that have made it necessary for these movements to exist.

As the official Black Lives Matter Global Network Foundation states the significance of the “movement [is] needed [for the organisation] to be a contributing voice for Black folks and our allies to support changing the material conditions for Black people.”