Artefact recently reported on the long-running protest in Poland against a Constitutional Tribunal ruling which tightened restrictions on abortion; the grounds for which were already some of the strictest in Europe.

Poles from across the political divide were seen to unite in protest against the decision, as some right-wing supporters of the ruling Law and Justice Party (PiS) were seen demonstrating in support of the women strikers.

The anger on the ground in Poland could be clearly felt as pro-choice protesters spoke of this as an attack on their autonomy, while others were fearful of the Tribunal’s decision.

In response to the widespread anger, Poland’s right-wing government has delayed the implementation of the controversial ban which, to become law, has to be published in the government journal by November 2nd. 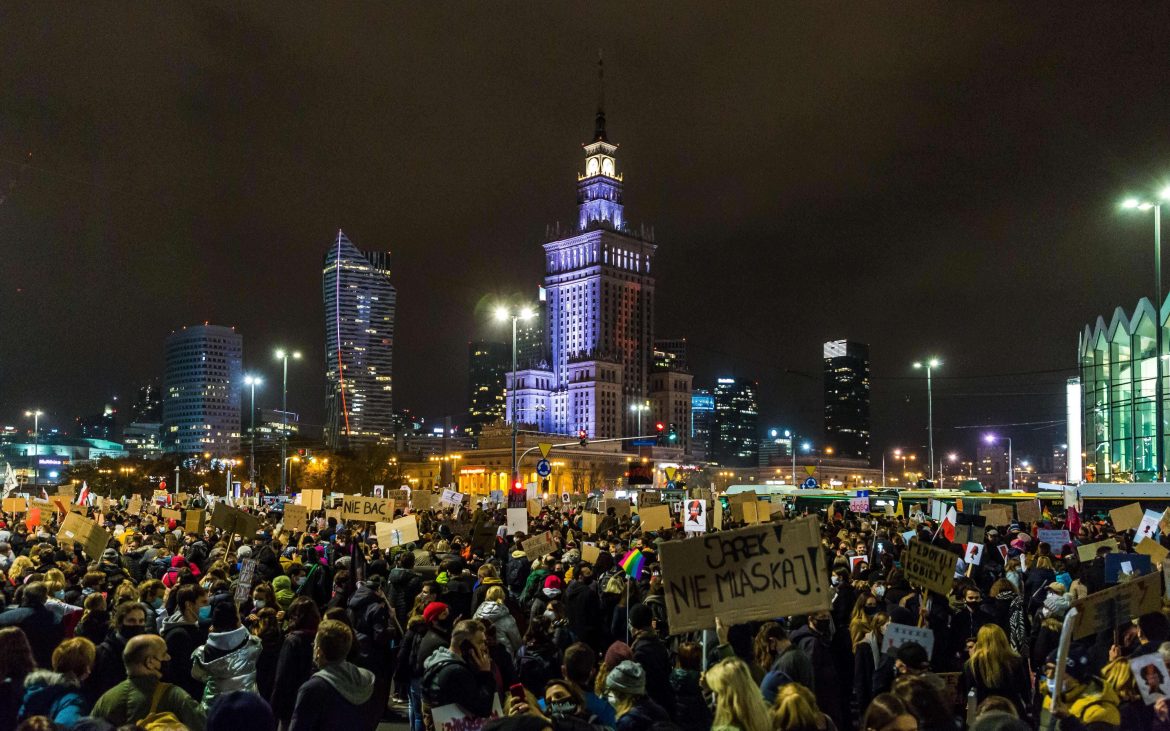 The Guardian reported that Michał Dworczyk, head of Prime Minister Mateusz Morawiecki’s office, said: “There is a discussion going on, and it would be good to take some time for dialogue and for finding a new position in this situation, which is difficult and stirs high emotions.” This appears to be a vain attempt to both calm tempers and stop protestors continuing to gather, defying restrictions on gatherings of having more than five people in a group during the coronavirus pandemic where cases in Poland are surging.

Protests on this scale have not been seen in Poland since the collapse of communism in 1989, and the anger ignited by the tribunal’s ruling is part of a growing dissatisfaction with the populist ruling Law and Justice Party (PiS).

The roots of this dissatisfaction within Polish society lies within the development of its democracy. In 1990, Poland had its first democratically elected President in Lech Wałęsa, the leader of the trade union, Solidarity, whose activism and leadership oversaw the end of Soviet-Communist rule.

“We are stubborn. It has gone too far to back out now.”

Under this new democracy, Wałęsa endorsed twins Lech and Jarosław Kaczyński for the Sejm (Polish Parliament) who would accuse Wałęsa of communist indifference within the party, ultimately defecting to found the far-right and incumbent Law and Justice Party (PiS).

In 2005, the Justice Party gained power with the late Lech Kaczyński as President and Jarosław as Prime Minister in 2006. Their campaign sewed lasting divisions in Poland that rested on conspiracy theories, denouncing communists, gay people and liberals as threatening the true Catholic values of Poland.

This affiliation to the Church and appealing to the majority Catholic country has muddied the water between State and Church, which remains heavily invested in public policy and a close ally of PiS.

After a time out of power in 2015, the Law and Justice Party successfully ran again, making history as the first party to win a majority since the end of communism. The party remains in power with Jarosław Kaczyński now the deputy prime minister.

Since then, the party has faced growing disapproval within Poland and criticism from outside. This year PiS passed legislation that removes the tripartite division of power, meaning the independent body that questions the appointment of other justices will be dissolved and judges who complicate the functioning of the judiciary can be reprimanded. The European Commission decided that this infringes the rule of law with legislation passed that “undermines the independence of Polish judges and is incompatible with the primacy of EU law.” 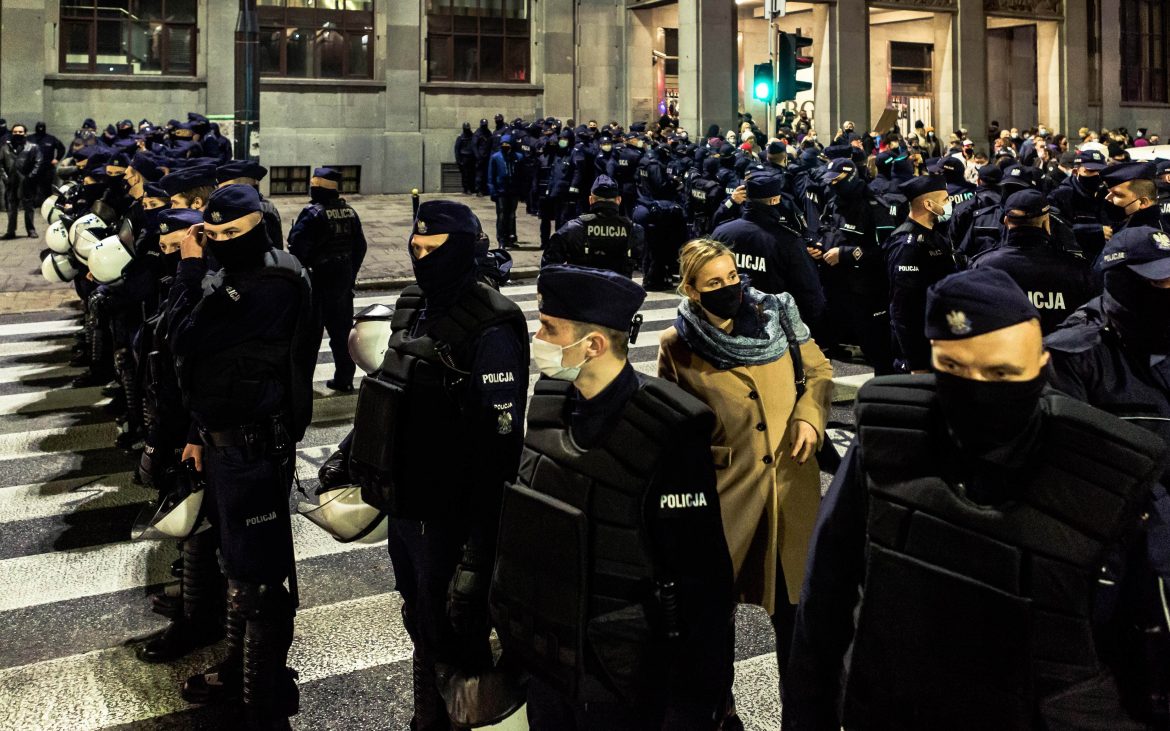 This opinion is shared by those in Poland, as well as by former President Lech Wałęsa who penned a letter to the European Commission, co-signed by 13 former Polish politicians to protect democracy and the rule of law in Poland.


The anger faced towards both the Law and Justice Party and the Church during the protests runs deeper than the standalone decision on abortions. Poland has lived within a status quo, in which the ruling party has steadily tightened its grip on power and is threatening the values of democracy. This is out of step with its own constitution and that of the European Union, of which Poland is a member.

“The rule of this party has been going on for years and has been dividing Poland for a long time. They won the elections with a slight advantage, and since then, they have managed to upset many social groups,” says Aleksandra Sojka, a student at Warsaw School of Economics.

“Social tension had been rising for some time as the party’s rule from the beginning was strongly oriented towards traditional values, which at the same time excluded so many social groups.

“We sat quietly and watched how people close to us were insulted by the government and how different groups of people were treated with less and less respect. Until the decision was made to tighten the abortion law, and a few people had the courage to shout that we’ve had enough,” Sojka told us.

“And others, who so far hid these negative emotions, decided that the negative tension that was building up in them finally had an opportunity to be released. And that their voice should be heard. We got pissed.”

“People are tired of priests being in their beds”

Though the Prime Minister’s office issued a statement attempting to cool tensions between the party and protestors, deputy prime minister Jarosław Kaczyński, said to be the real power broker, did little to achieve this.

“Defend Poland, defend patriotism, defend Polish churches, this is the only way we can win this war,” he said to his supporters, using aggressive rhetoric more akin to a call to arms.

The social unrest could not come at a worse time for Poland, with surging coronavirus cases that the government has been accused of handling poorly.

Yet for some, the timing of this decision seems deliberate: “PiS knew that this decision would not go through the normal road (which is Sejm, then Senate) so they went to the TK (high court) instead. They thought that because of the pandemic we wouldn’t protest, but oh boy how they were wrong,” says Anna, a finance analyst.

Aleksandra Sojka agrees but adds that it could also be an attempt to blame protesters for surges in cases, “This party is a bunch of terrible people, but unfortunately they are knowledgeable and well organised. It is possible that they deliberately planned to do it now so that there would be no protests.

“Or the other way around, they wanted protests to take place, to have something to blame for the pandemic, and not have to admit that they had taken too few steps to counter it. Either way, they do not care about people and our health. It is not our stupidity that made us risk our health; it is theirs.”

However, though many of the protestors are young, the trend has shown that increasing numbers of young Poles are likely to vote for right-wing parties. In the 2015 election, the incumbent Law and Justice party won 27% of the vote with those aged 18 to 29. But, it doesn’t make young Poles less democratic. They tend to be apolitical. The latest regional votes only saw a 37% youth voter turnout. 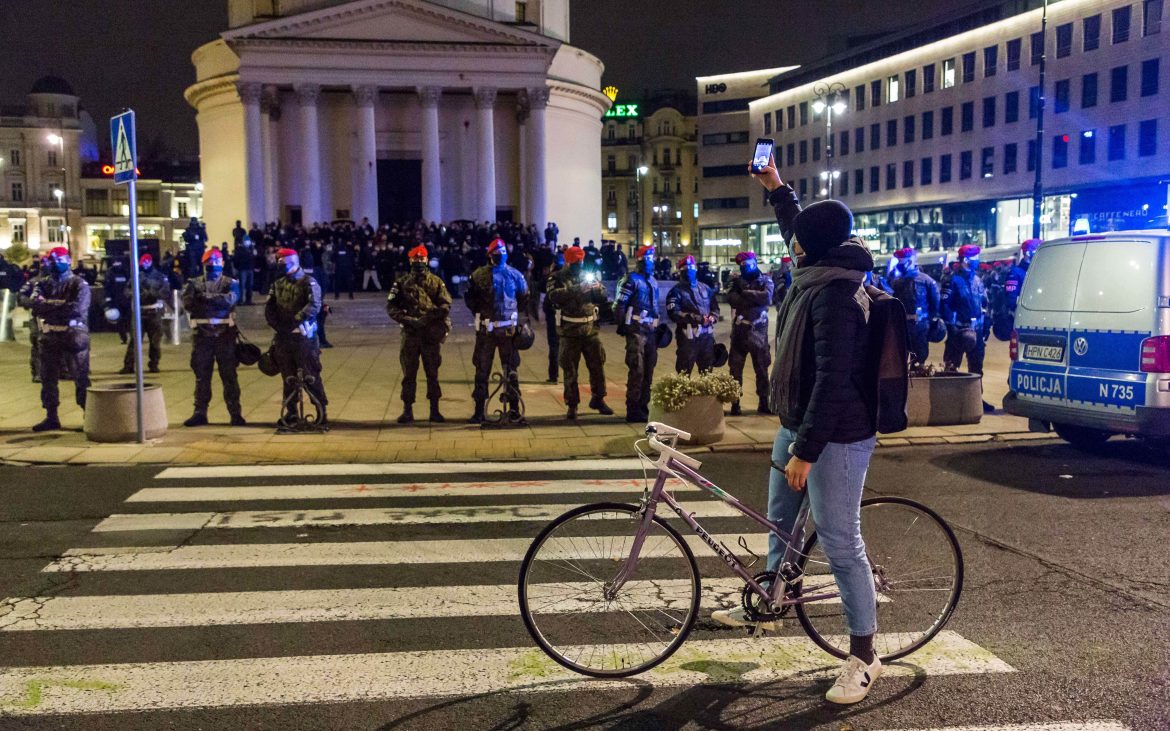 Poland remains a largely Roman Catholic country and of young people aged 16-29, 75% identify as Christian. This, in combination with a young voter base, could be the reason for the PiS government to believe this further restriction on abortion would be challenged but passable within this sector of society.

“I am a Catholic as well as my parents and my grandparents. Obviously, my views are far more liberal. I believe that young Catholicism is based more on faith rather than godliness. We are not afraid to admit that we believe in God, but if God thinks it is okay to force a woman to give birth to a child that will die in a few days, then we hope he will forgive us because we believe we are doing the right thing and causing more good than evil by fighting for women’s right to make their own decision,” said Aleksandra Sojka.

The Church’s influence over policy is clear, and it remains heavily allied to the Law and Justice party with its foundations set in the traditional and religious values of Poland. But young Poles are calling for separation.

“In my opinion, there should be a real separation between State and Church, not only on the paper. Not everyone in Poland is Catholic, and The State should be for everyone, not Christians only. I think that with the current government, the Church’s influence will never lessen, but with others, it’s possible. People are tired of priests being in their beds,” says 23-year-old student Julia.

Anna agrees but believes it will not happen soon. “Maybe in 50 years, but I hope that it will happen sooner. Because of PiS the Church’s influence on policy is stronger than ever, but people are angrier than ever. I feel big changes coming.”

These big changes start with the ruling on abortion. There is hope that the delay announced by the Prime Minister’s office could allow for the ruling to be reversed. However, with tempers high on both sides of the political divide, we won’t know the outcome soon.

Talks are currently being arranged with opponents to discuss a suggested amendment by President Andrzej Duda to allow terminations in cases of life-threatening congenital disabilities, but not as far as to allow for terminations in the instance of Down’s syndrome. This isn’t enough to please protestors and is said to be too weak by the policy’s right-wing supporters, suggesting that talks could lead to a stalemate. 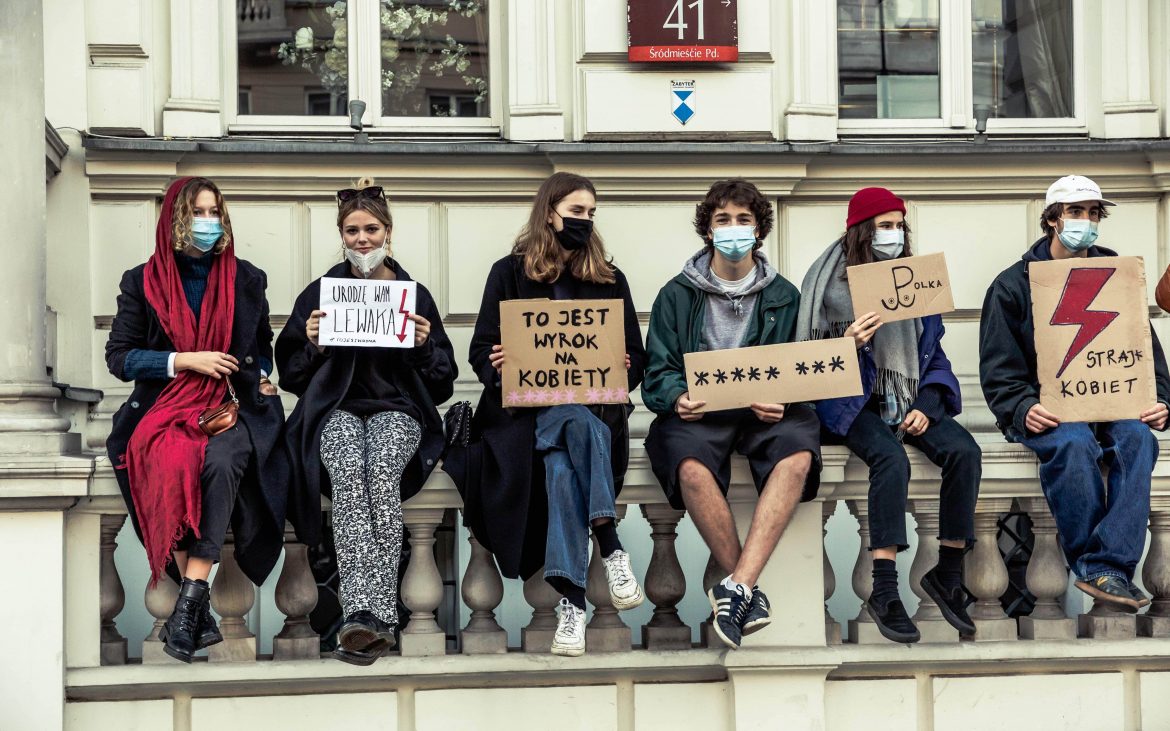 Those hoping the delay will be effective say they will not back down easily. “We are stubborn, and I believe that we will fight as long as we have to. If it is not effective, we will figure something else out. It has gone too far to back out now,” Aleksandra Sojka tells me.

Julia is not as optimistic, suggesting change cannot happen under the current government. “It would be possible if we had different laws, but right now, it will not happen. What can happen is government resignation and changing the constitution by a new government. It is, unfortunately, really risky and unlucky.”

Though the abortion ruling ignited these protests, it is clear that divisions existed long before and are more complicated than they first appear. A long-standing democracy such as the United Kingdom would view the situation in Poland from the outside and intuitively understand why anger would be so raw and protests so large. From within, you see the dynamics at play: a ruling party who threatens the basic values of democracy, who ally themselves with the Church, who chip away at the rule of law, and strengthen its position as an autocracy in the guise of democracy.

Though the situation will not change overnight, the women we spoke to are hopeful for the future of Poland. “It’s amazing to see so many people ready to risk their health or life even to fight for our rights, for a change. I didn’t expect that I would see our country being so united,” Julia says.

Anna agrees: “These are the biggest protests I have ever witnessed in Poland. I can feel the anger and pain. I see so many different people in the crowds. There is a saying that Poles hate each other, but when it comes to fighting for what we want, we can come together and overcome our enemies. I think that this is happening now, and I couldn’t be happier that I am part of it.”

This piece updates an article originally published on November 12, 2020.