Covid and the future of the creative industries

In a recent interview the Chancellor of the Exchequer, Rishi Sunak, stated that musicians and others in the arts sector “should retrain and find other jobs.”

The ITV News politics account tweeted after the interview: “@RishiSunak suggests musicians and others in the arts should retrain and find other jobs”. This claim became the headline of the story. 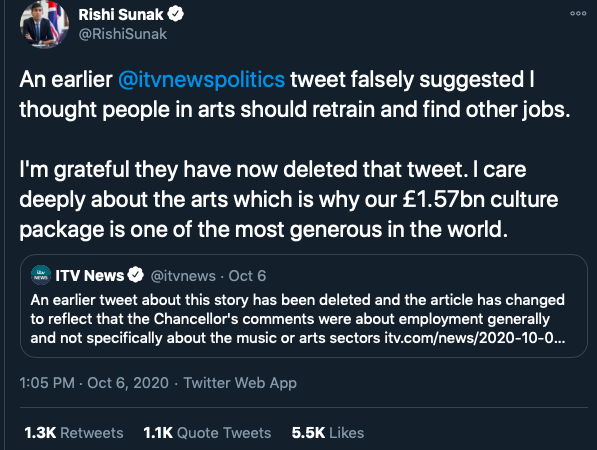 The Chancellor, Rishi Sunak, had to set the record straight [Twitter: @RishiSunak]

The original tweet has since then been deleted by ITV, and the article itself was changed to reflect that the Chancellor’s comments were about employment in general and that he was not specifically targeting the music and arts sectors.

Now, the headline reads: “Rishi Sunak says people in ‘all walks of life’ are having to adapt for employment,” while the Chancellor took to Twitter himself to set the record straight: “An earlier @itvnewpoltics tweet falsely suggested I thought people in arts should retrain and find other jobs. I’m grateful they have now deleted this tweet.”

The controversy over the interview was deepened by a government advertising campaign, CyberFirst, which launched in 2019. It consisted of a range of adverts, showing a ballet dancer, a barista, and a retail worker with a caption saying that their “next job could be in cyber” but they just didn’t know it yet.

Before the campaign website was deleted, it changed from “Rethink. Reskill. Reboot” to “If your career plans have been altered this year, you’re not alone.” 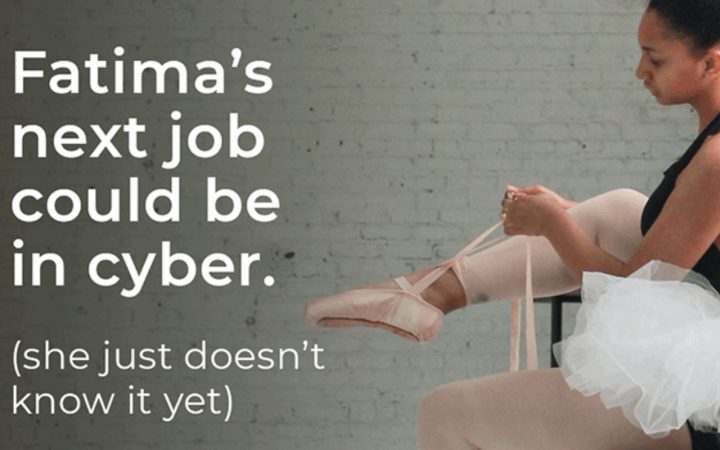 “Fatima’s next job could be in cyber” [CyberFirst/UK Government]

Each year the Arts Council commissions a report to showcase the contribution that the arts and culture industry makes to the UK economy, using data provided by the Office for National Statistics.

The report states that in 2019 the arts and culture industry has grown by £390 million and contributed £10.8 billion a year to the UK economy. It also contributes £2.8 billion a year in tax to the Treasury, and provides 363,700 people with jobs.

The cultural sector contributed £32.3 billion to the UK economy in 2018. The sub-sector of ‘Film, TV and Music’ made up three-fifths of this sector £21.3 billion according to statistics from the Department for Digital, Culture, Media & Sport (DCMS).

So why is an industry powerhouse that brings in billions of pounds to the UK economy and employs hundreds of thousands of people suddenly being called into question? Should those working in the industry really need to think about retraining and how important are they to society?

Toju Bello, 22, is a videographer, photographer, artist, author, and musician: “We have the impact of being able to inspire people and are able to portray the beauty of so many things that people may not realise or appreciate.”

Being self-taught, Toju has worked hard for over five years to make it in the industry. Having had the opportunities to work with artists like Lotto Boyzz’, Stormzy, Jacquees, and Ama Lou. He also worked on the project ‘Inspired Through Sports’ working with Team GB athletes and has worked as a photographer at many London Fashion Week events. 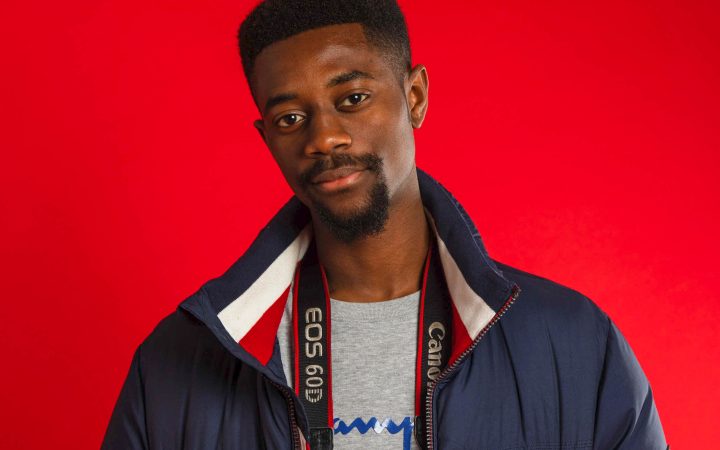 “It’s not a job; it’s the love and passion we have as creatives for our talents whatever it may be to keeps us going even during this Covid time. I totally don’t agree with it; I don’t like the way the word retrain was used. We shouldn’t stop what we’re doing and go work somewhere else. Find a way to adjust to this time I wouldn’t give up what I’m doing. I don’t believe you have to give up your skill or talent during this pandemic, just learn to be flexible and open,” he told us.

“I don’t believe they’ve done enough, because even though they claim to have invested certain things in certain places. Many people haven’t felt this so-called investment and support they’ve supposedly given. It shows that they haven’t used an effective method of helping those in this industry especially considering the number of people affected. I’ve had to do it on my own.”

Leonardo Soares is a 23 year-old singer/songwriter: “It lets me express myself; that’s why it’s so important today. Especially during this lockdown, it allows me to forget the moment, forget the crazy things happening right now. I hope that goes for everyone too.

“You always have to balance things I’ve performed at many pubs and cafes in Kingston, Wimbledon, and Surbiton and busked all over. Of course, I get an income from that, but I’ve always been studying and had a part-time job,” Leonardo told us.

“I think it was demeaning of them to think all of us don’t have other skills. We don’t need to hear that what people need now is support and clarity to know what to do next. They’re not being taken seriously.”

Freelancers and independent creatives have always struggled to earn in such a competitive industry even before Covid-19. Not everyone can adapt as quickly as Leonardo and Toju and those that can’t currently feel the government hasn’t been supporting them. Many have had to rethink career paths to pay the bills.

One report, entitled Cultural Catastrophe, projected a £74 billion drop in revenue for the creative industries and a loss of 400,000 jobs as a result of the Coronavirus pandemic.

“We urgently need a Cultural Renewal Fund for those in the creative sector who will be hit hardest.”

Oxford Economics was commissioned by the Creative Industries Federation to research the economic impact that Covid-19 will have on the sector. The report gives data for “music, performing and visual arts” which are likely to face a loss of £11 billion in revenues, a fall of 54%, resulting in the loss of 178,000 jobs.

Other sectors are also projected to face huge losses: 58% for design and designer fashion, 57% for film, TV, video, radio, and photography, 53% for craft, 44% for advertising and market research, 40% for publishing, and 24% for architecture.

“Our creative industries have been one of the UK’s biggest success stories, but what today’s report makes clear is that, without additional government support, we are heading for a cultural catastrophe. If nothing is done, thousands of world-leading creative businesses are set to close their doors,” said Caroline Norbury MBE, the chief executive of the Creative Industries Federation, in a press statement.

The effects of Covid-19 alongside the lack of Government support combined with the comments made by Chancellor Rishi Sunak and Cyber first ad campaign has not only caused outrage and discouragement for those already working in the industry but thousand of students who are training and studying to one day work in at art and creative industry. 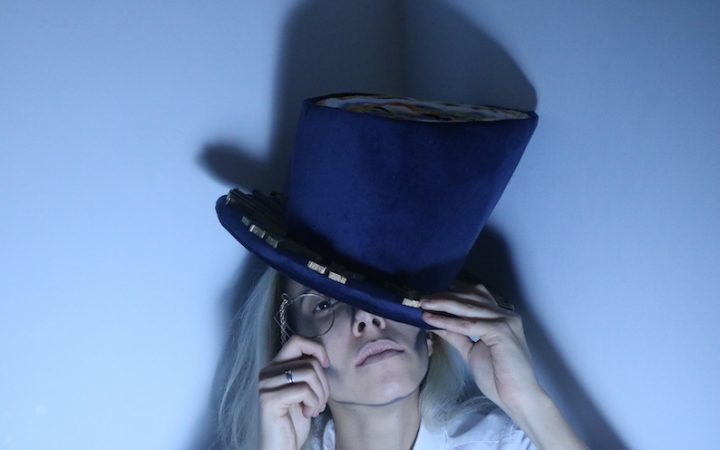 This headpiece is one of Mila’s many creations [Mila Dastugue]

Mila Dastugue is a second year student at UAL studying costume design: “The arts, in general, whether they are applied or not, are fundamental in our society. I don’t think people who are trying to discourage kids from becoming illustrators, photographers, stylists, etc., realise how our world would look without images. It is even the topic of a dystopian book. We, unfortunately, live in a time where arts are not valued.”

“I want them to imagine how bad life would be without the arts. It is outrageous to hear the government telling someone who wants to commit to working in the creative industry to retrain. Choosing to work in this field in our time is an act of bravery that should be encouraged,” Mila said.

“Culture and arts make us who we are. The music we listen to, the movies we like which clothes we wear. Even what we think is influenced by art. Please don’t kill the creative industries.”