The idea of “imperfect vegetables”, or produce that doesn’t meet strict cosmetic specifications, is one of the most astounding concepts I’ve come across since moving to the UK.

The notion that a crooked carrot is not of good quality would be considered wasteful in my home country of India, as it would in many other countries with a lower-than-average income per household.

Food waste is one of the biggest climate threats whose impact is often understated. A third of food grown goes to waste. If food waste were a country, it would be the world’s third-largest emitter of greenhouse gases, after China and the US.

Yet it’s an issue that almost everyone, especially in higher-income countries like the UK and USA are complicit in, and like every other major climate problem, changing consumer behaviour can only do so much, especially when major supermarkets keep avoiding “imperfect produce”, or produce that doesn’t meet strict cosmetic specifications.

Even though wasting food is generally looked down upon wherever you come from, the figures tell a different story about  people’s actual behaviour. The United Nations’ Food and Agriculture Organisation (FAO) estimates that about a third of all food grown in the world is lost or wasted.

But the difference between “food lost” and “food wasted” is where behavioural patterns of consumers and retailers diverge. 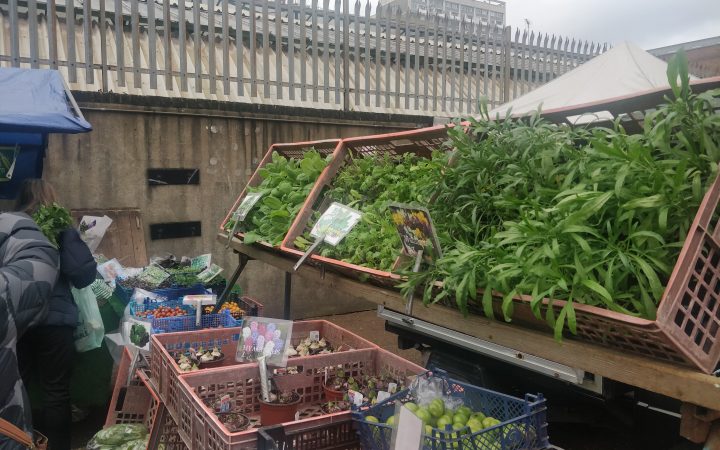 In lower-income countries, most of this occurs as “food loss”. This means that the food is mainly lost in the early stages of the supply chain, often due to poor agricultural practice, lack of adequate facilities to harvest and store crops, etc. An FAO study reports that in these countries, very little food is wasted at the consumer level.

On the other hand, “food waste” refers to the loss of produce that is suitable for human consumption, often at the latter end of the supply chain, like retailers and consumers.

While a major part of this comes from food that consumers buy and then throw away, supermarket practices play a bigger role in promoting a culture of food waste, for example overstocking supplies, deceptive “use-by”, “best-by” and “sell-by” dates, and arbitrary cosmetic specifications are some of the major causes of food waste on a retail level.

Cosmetic specifications are one of the biggest reasons for food waste identified by farmers. Feedback Global is a non-governmental organisation that has conducted extensive investigations into food waste on farms, and the impact retailers have on food waste.

According to their 2018 report, an average of 7.4% of a farmer’s crops couldn’t be sold due to these requirements, with some going as high as 40%.

“The criteria mentioned in the report include fresh produce that does not fit the specific size, shape or colour required by the supermarkets, even if the produce is nutritionally safe.”

“I don’t do the cosmetic thing. If it’s not damaged, it goes on the stall. People don’t mind the odd green bug in their lettuce because I don’t use any chemicals. You can either have a bug, or you can have the poisons,” said Nigel, a farmer who runs Nigel’s Lettuces and Lovage.

Nigel has been a grower since the ‘60s when he started working for his father, who himself set up a nursery after the Second World War. He’s been selling his produce at London farmers’ markets since the first one opened in Islington in 1999, and for smaller farms like his, farmer’s markets are the only way he can sell his produce at a rate that will allow him to continue living.

For Nigel, he refuses to work with supermarkets because of the impact these cosmetic requirements have on both the amount of food waste generated and the quality of the produce itself.
“Supermarkets have their standards, and the only way to reach it is to kill any bugs. It might be damaging the crops,” he said. Instead, he feels more natural methods like introducing certain organisms into the fields that only eat specific pests and avoid damaging the crops.

This demand for “aesthetic perfection” is fuelled by the notion that consumers are less likely to buy a carrot if it doesn’t have the colour and perfectly conical shape like the ones seen in cartoons and advertisements. If these requirements aren’t met, then the produce is rejected, and the growers are forced to sell them to wholesalers at half the price. 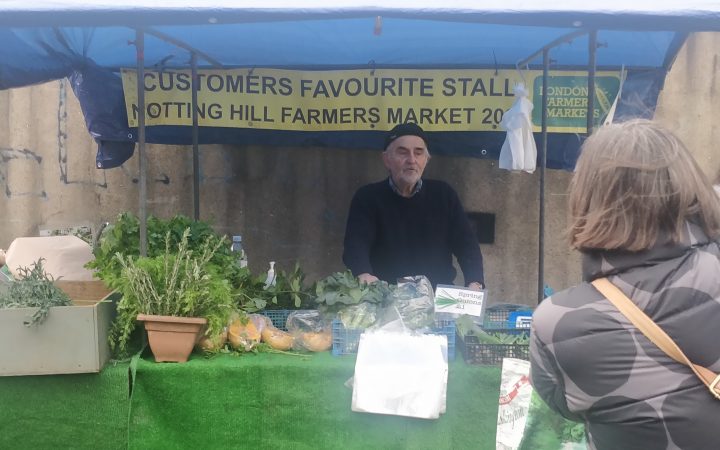 As he spoke, Nigel pointed towards his box of garlic. All of them a shade of brown, with some bulbs having chunks of dirt still clinging to their roots. But for Nigel, that was what he was proud of. “The garlic looks like it just came out of the ground ’cause that’s what it did. It’s got a bit of earth on it, it’s stained by the soil. The garlic’s delicious, everyone who says it’s not hasn’t tasted it”, he said.

“When you see this bleached white stuff in the supermarket, you have to ask what has been done to make it so white because it doesn’t come out of the soil like that. People don’t mind a little bit of dirt on things. You can just wash it off.”

In 2014, the National Farmers Union gave evidence to the House of Lords about food waste. In it, they stated that farms could lose unto 20% of their apple crops because retailers demanded red gala apples had to be at least 50% red in colour.

These rejected apples couldn’t even go into the juice market because the prices were too low to justify the cost of labour and transportation.

Food waste harms the world economically and ecologically. About 1.3 billion tonnes of food is wasted every year, who’s value is upwards of $1 trillion (£750bn). If even a quarter of the food wasted in the UK, US, and Europe were redistributed, it would effectively eradicate world hunger.

If all the food is wasted was grown together, it would cover an area larger than China and use up a quarter of the world’s fresh water supply. Yet corporations spend massive amounts of resources growing produce with irresponsible practices, only for those foods to be thrown away.

While supermarkets may claim that very little food is wasted on the retail level (about 2% of the total), often that doesn’t tell the whole story. These companies have a massive power over what farmers grow and what practices they use.

Often these include wasteful trading practices like “order cancellations, last-minute changes to forecasts, retrospective changes to supply agreements and the use of cosmetic specifications to reject produce.” 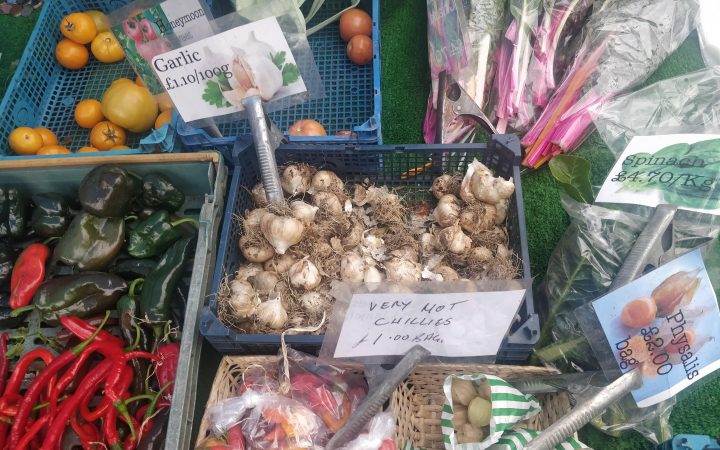 Fresh vegetables from a farmer’s market in Notting Hill [Ashkenaz]

“Our report on food waste on UK farms highlighted that supermarket practices, both fair and unfair, may drive farmers to waste around 10-16% of their crops,” Feedback said. According to WRAP (the Waste and Resources Action Programme), another organisation looking at sustainable practices across businesses, more than 2.5 million tonnes of food is wasted on UK farms every year.

The freedom to grow and distribute produce with autonomy is another reason why Nigel prefers to sell in farmers’ market over major supermarkets. “If I’ve got leftovers I’m quite willing to donate them to a charitable outlet. It works well for us because we’re on a small scale and we have the flexibility to do that. The bigger the systems get, the less versatile they get to be,” he said.

“If you’re working with a major supermarket and they say they want something you have to go out and fetch it. If they suddenly decide don’t want that stuff, what the hell do you do with it? Because you’re tied into a supermarket supply chain, you haven’t necessarily got the outlets to dispose of them. You’re trapped.”

These irresponsible practices from supermarkets often force farmers to overproduce, which further increases their food waste. According to the Feedback study: “Farmers overproduce because there is pressure to always meet buyer orders, or risk losing contracts. It is difficult to find outlets for the surplus.” They are afraid of losing customers due to a lack of supply.

This is what Feedback aims to resolve through their gleaning initiative. In this scheme, volunteers go to farms with a lot of excesses and help by harvesting this excess produce and redistributing it to various local projects and organisations.

“Gleaning highlights the shocking levels of food waste at the farm level,” Feedback told Artefact. “Volunteers see good food going to waste and recognise the need to urgently work together to create a better food system.”

Since 2012, the organisation has rescued more than 650 tonnes of fruits and vegetables and worked with about 60 farmers.

“Gleaning is an ancient practice with modern relevance – why, when food represents such a colossal environmental burden, are we allowing mountains of it to go to waste before it has even left the farm? We’ve been lucky to work with thousands of volunteers and hundreds of farmers to shine a spotlight on this hidden issue while ensuring that good, fresh food reaches people who have poor access to it”, said Jessica Taylor, the head of Policy at Feedback. 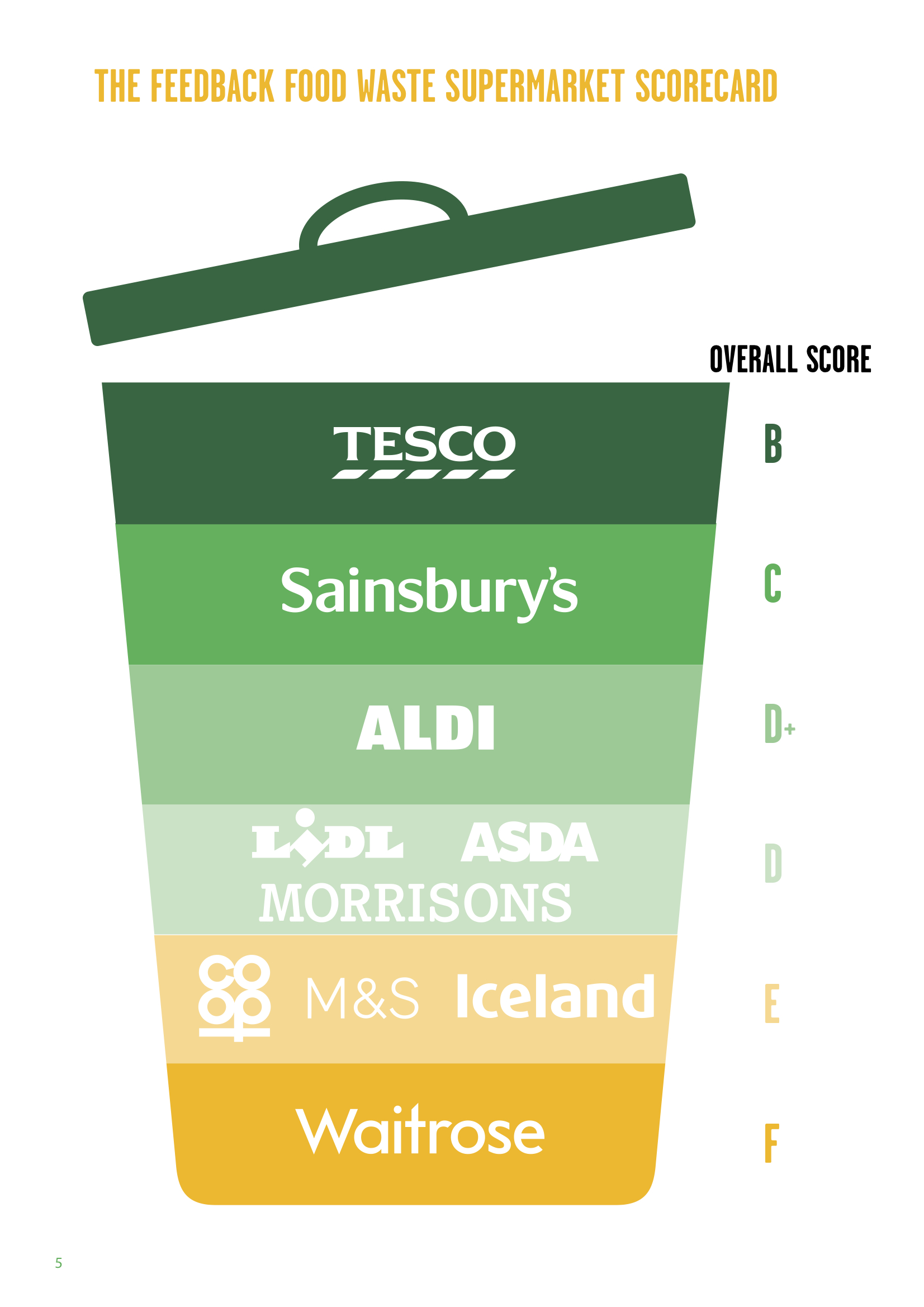 Feedback has done extensive research on the UK’s top ten supermarkets on their impact and initiatives on food waste. In that survey, they found Tesco currently leads the list on their food waste initiatives.

They were the first supermarket to publish third party audited food waste data and the first to sign up to the Sustainable Development Goal of halving food waste from farm to fork by 2030. According to the report, they increased their quantity of food distribution by about 40%.

Meanwhile, Waitrose lands itself on the bottom of the list in Feedback’s report. They have no publicly available data on food waste. That, coupled with their limited efforts in redistributing food and working with suppliers, make them the least sustainable supermarket on this.

Even though is report is two years old, according to Feedback, Tesco still leads the charge on food waste initiatives. “Even Tesco is now calling for reporting of food waste measurement to be mandatory”, said Christina O’Sullivan, Campaign and Communications manager at Feedback.

“Progress has been slow (…) retail food waste has reduced by around 0.5% per year since 2009, and while manufacturing waste has fallen much faster.”

“There have been some advances; however, the reality is a lot more needs to be done”, Feedback told Artefact. “Waste in the hospitality and food service sector is estimated to have increased by nearly 20%”.

One of the most important steps supermarkets can take in reducing food waste is having accurate and transparent information. This data should include food waste from every point of the chain, from the farm to fork.

Having publicly available information can lead to these corporations changing their business practices to reduce their food waste. For example, after Tesco made their food waste data public, their initiatives surged.

In 2016, the CEO of FareShare, a major food redistribution charity, Lindsay Boswell said: “We work with 450 food manufacturers and most big supermarkets, and they all initially protest that they have no waste. Four years ago, Tesco gave us no food, now they give us five million meals a year and are our largest supplier.”

According to Project Drawdown, reducing food waste is the best way to solve a climate crisis, beating technological innovations like electric cars and solar panels. So what we need to do now is force supermarkets to reform their practices.

“This involves holding large food businesses to account for the waste they cause across the food supply chain. We need real action on food waste now” said Christina.

One of the first steps involves pressuring retailers to release transparent reports to the public about the food waste they are generating and how effective their initiatives are.

When Tesco started doing it in 2016, their initiatives surged. In the meantime, what we can all do is be a little less picky about our next grocery shop.