Only two in every three adults in the UK are willing to get the Covid vaccine according to a recent survey.

With the approval of the Pfizer/BioNTech vaccine, the majority of the UK’s most vulnerable citizens will be able to receive the vaccination from as early as January, with the jabs then being made available to other groups, NHS England has confirmed.

However, according to a survey conducted by market research company Savanta ComRes on behalf of ITV News in late November, 23% of the respondents said they would not get the vaccine, while a further 10% were undecided.

The British government’s Medicines and Healthcare products Regulatory Agency (MHRA) approved the Covid vaccination for use in the UK on December 2, but questions have been raised around the speed of the decision.

“A few weeks of thorough examination…is better than a hasty emergency marketing authorisation of a vaccine.”

European officials have cast doubt on the level of thoroughness in the vaccine’s reviewal process.

Peter Liese, a member of the European Parliament’s public health committee described the decision as “problematic”, saying he would not recommend that other EU member states should follow Britain’s lead.

“A few weeks of thorough examination by the European Medicines Agency (EMA) is better than a hasty emergency marketing authorisation of a vaccine,” said Liese.

EMA, which has decided to make its decision on the approval of the vaccine on December 29, said its approval process was more suitable given that it was based on more evidence and requires more checks.

But vaccine developer, Pfizer, said that all the necessary testing has already been done. “We have provided complete data packages, the unblinded data, to both regulators,” said Ben Osborn who is Pfizer UK Country Manager.

“I think what you’re seeing is just the difference in the underlying process and timelines, as opposed to any difference in data submission,” Osborn said.

Within the UK, other groups remain opposed to the release of the vaccine, citing an encroachment on medical freedoms.

Save Our Rights UK, an anti-lockdown campaign group that started in April after the extension of the first lockdown, have protested the measures throughout the pandemic, calling the actions that the government imposed “not reasonable or proportionate”.

The group has raised concerns about the coronavirus vaccine and the potential risks posed by the relatively short time it has taken for the vaccination to be tested and developed.

The campaign group says it’s watching closely to ensure that the vaccination is not mandated. 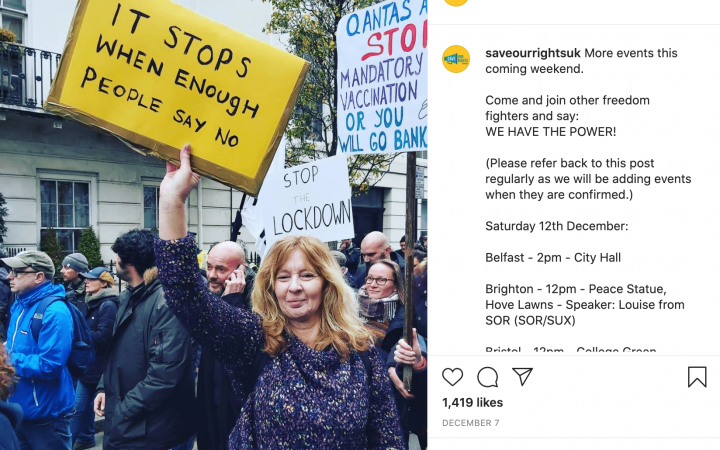 Woman holds placard during anti-lockdown protest [Save Our Rights UK]

Louise Creffield, founder of the organisation, told Artefact that the group was also campaigning for a “medical freedom bill”, in an attempt to lobby the Prime Minister and all MPs to pass new legislation that will protect the rights and freedoms of individuals.

“There are lots of companies and airlines saying that you can’t come in if you don’t have the vaccine,” Creffield told us.

“I don’t think the government will mandate [the vaccine] themselves because there would be riots on the streets. But by turning a blind eye, it essentially becomes mandated anyway. Corporations can put pressure on, they can lobby the government, and if they go ahead with this sort of stuff then they’re essentially making the decision for them [the government],” she said.

“The government is there to protect our rights and freedoms and if there is an issue such as this, they should be taking proactive steps to prevent it and that’s what we’re calling on Boris to do,” Creffield added.

Dr William Budd, who is a clinical researcher on the Covid-19 vaccine trials said that it was good that people were questioning the vaccine and taking an interest in it, but also encouraged people to “keep the conversation going” by being open to ideas from others and doing their own research.

“Don’t believe everything you read. Do your own research.”

“I think it’s quite good that people are questioning the vaccine in this case. It’s intelligent that people are thinking about what actually is going into their bodies. [However], it’s important to say that everything you’ve seen on social media isn’t always true,” Budd said.

“Social media can be a good power in terms of education and I myself use TikTok as part of a UN initiative called Team Halo to educate people in terms of the vaccine. But don’t believe everything you read. Do your own research.”

Budd said he believed that there should have been more communication to the public from government and specialists to explain how and why the vaccine was approved.

“I don’t think [the vaccine] should be mandatory and that’s my personal opinion but I think that there should be an encouragement for everyone to take it,” Dr Budd said.

“It’s still early days to assume that [the vaccine] should be mandatory or shouldn’t be, because you just don’t know how many people are going to take it anyway.”