“We used to just get drunk and just make stuff, in the early days we couldn’t record anything unless we’d had a drink.” For these guys most of their early work in the industry began with tales of booze-fuelled instances, it’s clear to see what they’re doing is the start of something special and perhaps alcohol is something to which they owe some success.

The aptly named ‘Punkband’ have broken into punk and alternative sound this year and have already made quite an impression on both scenes. They’ve been heard on BBC Radio 1’s Alternative show hosted by Jack Saunders a number of times, and have gained an impressive 6,686 monthly listeners on Spotify.

They’ve also begun to be recognised in more mainstream avenues, and most recently have landed themselves a spread in NME, a bastion of the music and pop culture scene in the UK since the 1970s.

It’s impressive to see a band so comparatively fresh to the charts gain as much intrigue and traction as Punkband have. Much of their success is down to their seamless merging of old school hardcore punk, and a modern Generation Z sense of irony and absurd humour.

With a number of songs already released, the two young men who make up the band, Toby Ergatoudis and Alex Cook, throw themselves with full bodied enthusiasm into this quirky and comical style in both the lyrics of their latest song Abcabcabcabcabc, and in their music video for the track.

The clip features a chaotic merging of the gritty urban imagery of classic punk, and modern pop culture icons such as Charlie Sheen and Rebecca Black in the form of cardboard cut outs.

The newest addition follows previous releases Kick It Up and Shit or Bust. The two lads have previously said that they’re “on a mission to be the biggest band ever” and that the band was formed “out of sheer boredom”. 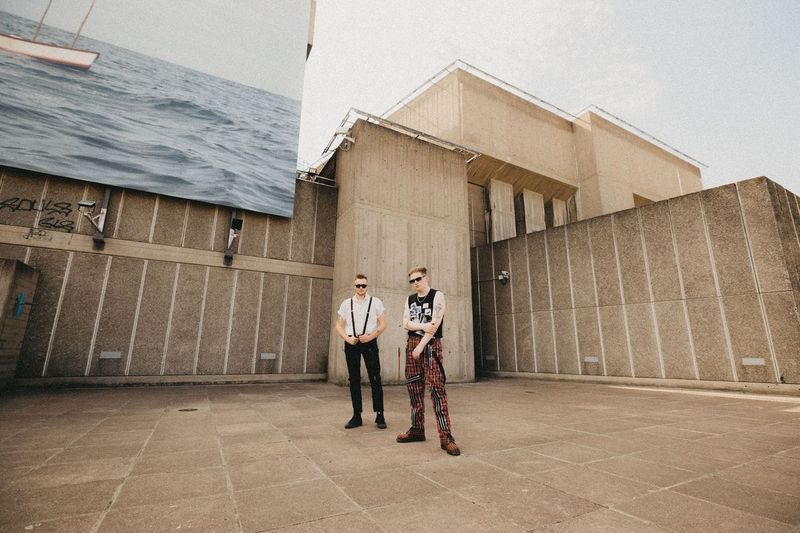 After managing to pin them down for an interview, despite the charmingly, tongue in cheeky assurances from lead singer Toby, that they “weren’t currently giving interviews right now”, they were more than happy to give some insight into the band.

Before the pair formed the band Alex was apparently doing “sweet fuck all”, whilst Toby was working in a bar. So where previous jobs didn’t have much influence over their decision to form the band, their love for music did.

“Going to the Boilerroom was a huge influence for starting Punkband, we used to go there and to The Hippodrome and watch other bands perform and think, we could do that,” they told us.

The Boilerroom is a ‘Music and Cultural Arts Space’ in Guilford and they pride themselves on being “curators of emerging, national and local music, community and creative arts events since 2006.” The venue has held Ed Sheeran, Foals, Marmozets, First Aid Kit, Catfish & The Bottlemen, The 1975, David ‘Ram Jam’ Rodigan OBE – many artists that have gone on to great fame and success.

The two lads showcase an alternative 70s-esk look from what they wear to their lyrics, and in their latest music video for Abcabcabcabcabc lead singer Toby can be seen sporting a ‘Napalm Death’ hoodie in homage to the Midlands-born extreme heavy metal band.

Alongside ‘Napalm Death’, the band finds their inspiration from the likes of “The Clash, Sham 69, The Buzzcocks, Joy Division and The Prodigy. All the old 70s punk stuff is really our main influence. But honestly we find inspiration from anything.”

Although they’ve got their influences, their lyrics and unique style have never been done before, with most of their songs containing explicit content and language.

The popular song Shit or Bust, which currently has more than 1,000 views on YouTube contains a chorus of “Fuck it X6, I’m getting a beer.”  Their newest release Abcabcabcabcabc is so crude in its language, that they were informed that it would “definitely not be allowed on the radio”.

However, Toby went on to say that “radio really isn’t that important in the great big scheme of things, to us it’s more about playlists. Spotify and Youtube are our biggest platforms thus far. Obviously it would be great to play live shows and that is in the pipelines. But radio to us isn’t what it used to be, back in the day it would be telling of success to be played on air.”

So whilst we’ve already seen a number of songs form Punkband, in 2021 we can expect to see some form of them in the flesh. After their ever-growing success on online platforms, it’s no stretch to see why plans for the band are in Alex’s words, “to do a headline show in London, then support someone on tour, obviously that’s dependent on what Covid wants to do next. We’d like to do a few small festivals next summer as well.”

Some fans are eager to find out when the next would be coming out. “February or March realistically. It takes a long time, especially not being able to just go and do a video at the moment,” Alex said.

Toby jumped in: “A few people have said to us to do a Christmas song but we’re not melts so won’t be doing that,” and fittingly the interview ended with a “yeah, fuck that” from Alex.

Whatever Punkband have coming our way next, it will no doubt follow their merging of old school hardcore punk, and a modern Generation Z sense of irony and absurd humour.

And we’re here for it.