When I set out to write an article about Grow Heathrow, I had a certain kind of idea for what I was going to write. It would be an incredibly narrow article about what it was like to live in an off-grid community, and purely about the lifestyle.

What I didn’t anticipate was how difficult it was going to be to produce the article.

Firstly, the group didn’t reply to the email I sent them or the detailed message I sent to their Facebook page. I decided to take a slightly more forward approach to try and meet them in the flesh. The first meeting they took down my contact details and then didn’t get back to me.

I went a second time and I made progress. A woman let me into the compound and took me to the centre building where I met Centaur. He didn’t want to be recorded and wanted to stay anonymous, which I couldn’t really understand. It seemed evasive, like he didn’t trust me.

I was able to get a second interview with another man who we’ll call Jeremy Wilson who was happy to be recorded, but unhappy to share his name unless I sent him the article before I published it. Comfortable, but not completely satisfied, I vowed to come back a third time to get three more interviews. This didn’t happen.

I had a long email conversation with Jeremy, which took place over seven days. This concluded with me being unable to come back for a third time to get the remaining interviews due to their general sense of discomfort about my presence.

It could easily also be down to Covid-19, but I didn’t get that impression.

They simply didn’t want me there.

Disheartened, I ultimately gave up on the piece. It wasn’t until I had telephone conversations with my Dad and Oma (Grandma in Dutch) who suggested that I write an article about how difficult it was to contact them, record them, or get their names.

This piece is dedicated to them for their encouragement to not give up in the face of adversity. So, here’s the story of my meeting with the elusive, mysterious activists of Grow Heathrow.

When I was let into Grow Heathrow, I didn’t feel welcome at all. The girl who let me in seemed only todo so because she just didn’t know what else to do. I was led into a beaten-down hut where Centaur was laying out a big mat to cover the floor. Clothes were on one side of the room on hangers. 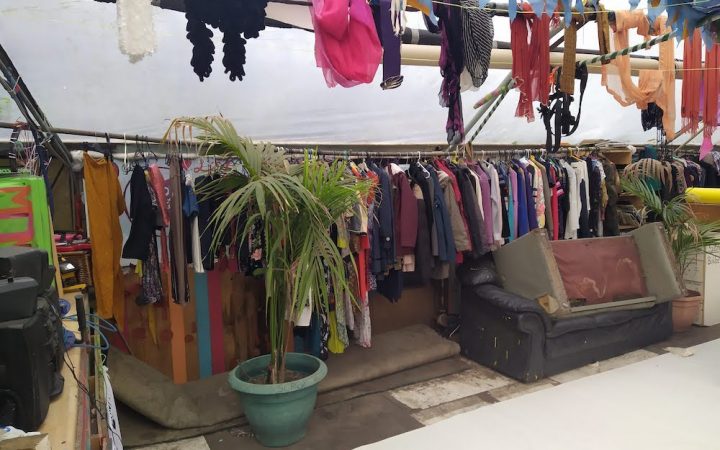 Clothing for the community [Emil Brierley]

My initial impression of him was that he was tired and annoyed by my presence. When I explained that recording him would make things easier for both of us, he froze up —leading to a slightly heated discussion with the implication that any recording was off the table because “the government could be listening”. He did, however, begrudgingly stop what he was doing and gave me a tour of the site.

The notes I took from the conversation are quite sporadic and don’t really capture the full essence of our conversation together. He later told me that those who live there are incredibly private people who hate the spotlight. “We don’t try and publicise [Grow Heathrow], so the right people come and live here.”

They run gigs and open mic nights. This is how Centaur was introduced to the community and started living there. People usually stay for about two weeks. They’re free to have up to 30 people live there at a time, but much of this has now stopped due to the coronavirus.

The first place he took me to see was the site toilet. They repurpose the waste, compost it, then use it to fertilise the plants. He says that over the last 10 years (since the site was initially created), more than 800 people have lived there, and at one time around 50 to 60 people were living on site.

According to the Diggers and Dreamers community forum, Grow Heathrow has four main aims: 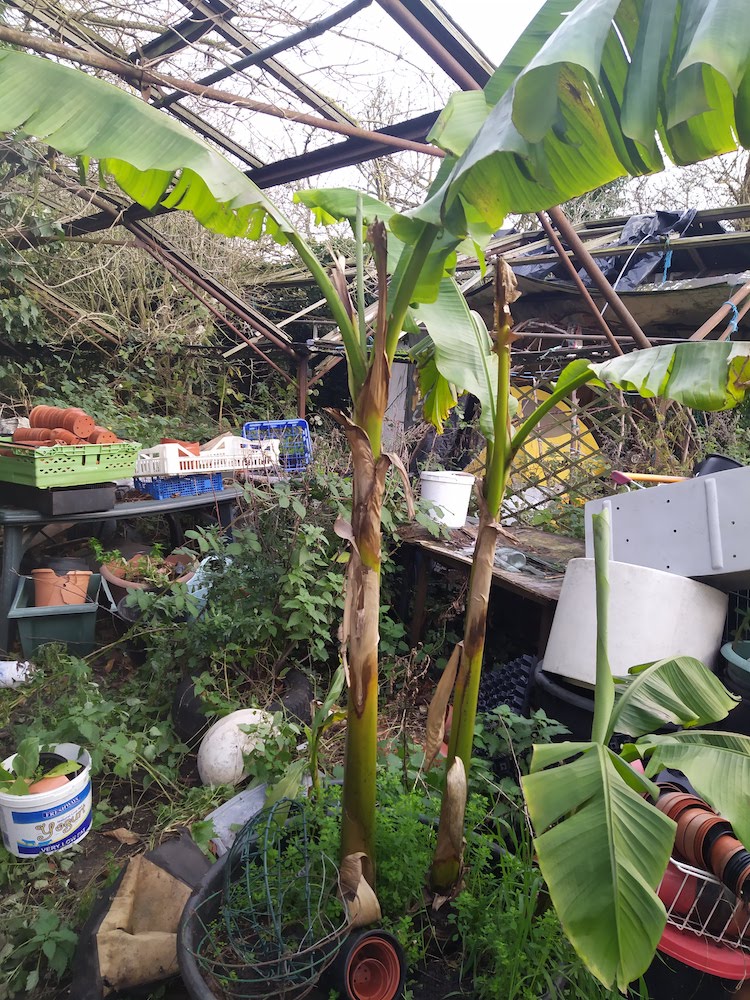 It was difficult for me to understand how these aims were put into practice because I barely had a chance to experience the community in action since I only spent two hours there in total. Currently, the community is closed due to Covid-19, so I was fortunate to have my time there.

Back on the tour, we then went to look at the polytunnels. They grow tomatoes, bananas and a variety of other vegetables. They also survive through donations and dumpster diving, so they’re not 100% self-sufficient. They’re also not wholly off-grid because they have running water and Wi-Fi. They also have a shower with water that is heated by fire, and all the living spaces are heated by fire too.

Grow Heathrow used to be a bigger space, but in 2018 they lost some of the land rights because the owners didn’t want them there. This area has now been converted into a car park, which Centaur claims they don’t have planning permission to build.

The land they’re squatting on now is owned by an off-shore company that’s happy for them to stay there because they don’t want the place to be used for fly-tipping. For many years the site has been a protest against plans for the third runway at Heathrow.

The piece of land was set up by the local MP John McDonald. When they initially moved in, it was a scrapyard. According to Huck magazine at least 120 tonnes of rubbish has been removed over the years. Before it was a scrapyard, it was a farm growing market vegetables. The old farmhouse has now been converted into a Muslim girl’s school. 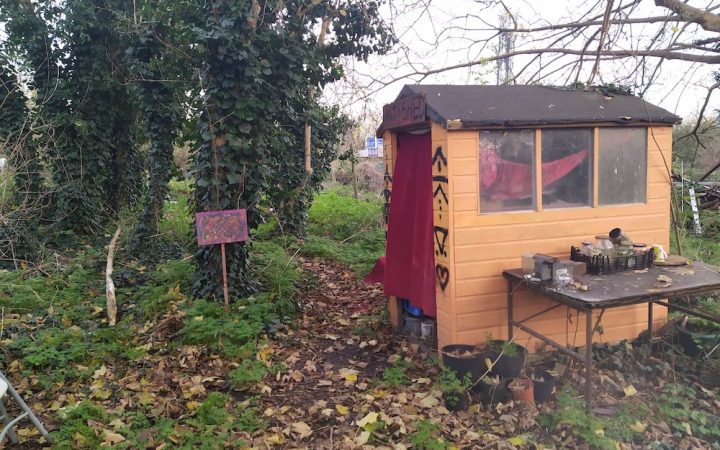 The land is a former scrapyard [Emil Brierley]

When the tour was finished, I asked him his name, but he gave me this one instead because “the more information you give away, the more can be used against you.”

I briefly spoke to a woman who was staying there with her girlfriend to get a break from one of the HS2 sites. I was barely getting any information out of her that was to do with the site, so I asked if I could speak to her girlfriend. Her girlfriend (again) wasn’t comfortable being recorded. She eventually found someone who was.

This was when I met Jeremy. From this began the most chaotic interview of my life. Jeremy had quite a nervous disposition and would completely miss out words in a sentence meaning the sentence wouldn’t make any sense.

From one perspective, the interview was an absolute train wreck. From another, an absolute gold mine. He seemed to have a lot of pent-up, if chaotic, energy that just wanted to burst free.

Jeremy initially found out about Grow Heathrow after meeting some people at Stonehenge, but said he was initially sceptical of the idea behind it: “At the time I couldn’t understand why you wouldn’t want a third runway at Heathrow. It wasn’t one of the issues I was against at the time. I had no real understanding of it. I had a look and came to my own conclusions.”

Things have changed for him since he’s been at Grow Heathrow. He describes himself as a ‘keyboard warrior’. He was regularly shadow-banned for some of the things he’d post. “Being here I’ve come off the internet mostly. To live a different alternative lifestyle. Calmed down a lot throughout it. I was really annoyed at the world for a while.” 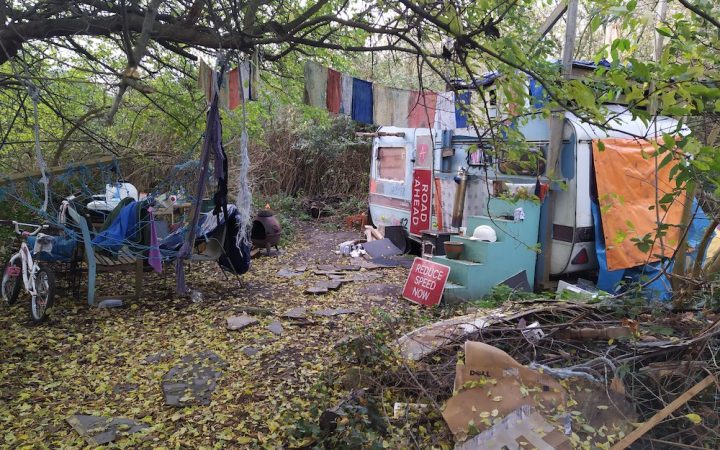 Before moving to Grow Heathrow, he was having difficulties with his work: “I was in a job that was providing me with not really enough to make my bills let alone keep a family happy. And I’m giving all my time into that and getting nowhere. Sometimes I’d be paid to stand there. If you’re on site work, sometimes there’s nothing to do until Wednesday. You’ve told me the materials don’t arrive until then. It wasn’t a fair exchange.”

Since moving to Grow Heathrow things have changed for him. “I’ve started to care a bit less. I was a bit pent-up with angst and wanting the world to change. I felt the world needed a big change.”

When pushed further, he said: “I think there are some major criminals in the high end of this country. I know lots of friends and acquaintances and friends of friends who have had to be punished for their crimes, and it’s an insult to them. That these high-class criminals can get away with it. I think Britain is becoming more and more openly corrupt.”

This perspective wasn’t shocking to me as Grow Heathrow comes across as a very Marxist, anti-capitalist group of people. Their distrust of outsiders and the system is evident, from the few interactions I had with those on-site.

At this point, the interview took a turn that I didn’t expect after asking whether his lifestyle was a way of rebelling. He started speaking about how the system unfairly treats prisoners using indefinite sentences. “There’s almost an underclass that’s growing up that are bound to be led into these conditions. They’re going to be led into these conditions. If someone’s an addict, don’t they deserve help to change their ways, or is it better to send them to prison when there are billionaire drug users?”

Still, off-topic, he moves on to speak more about the political system that exists in the country. “I consider myself separate from the government. I do not consent to being governed by this government. I’m not saying everyone shouldn’t. They have some benefits for society. I don’t know whether the benefits outweigh the costs. I don’t want to pay any taxes at the minute. I won’t take any benefits off them. I think it’s dirty money.” 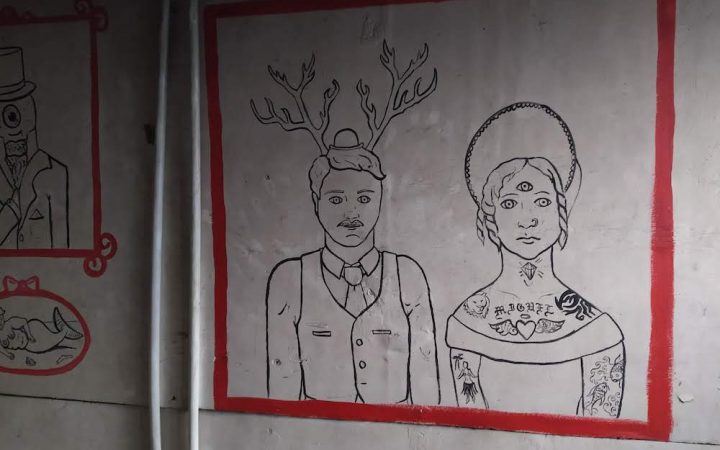 “I think there’s enough for everybody in Britain. I think there is no housing crisis. I nearly voted last time. I thought Corbyn might do some good. I don’t know whether he was saying it to get into power, but I don’t think his party would have let him make the changes he was talking about. The Green Party is alright, but they’ve got no chance of getting in. We don’t need climate change; we need system change.”

Jeremy’s life now is a lot different from what it used to be. He no longer works and spends most of his time working at Grow Heathrow. “I just garden mate. Plod around in the garden. Eat, get food. It’s a much slower pace of life. Chop a bit of wood. To light a fire, you’ve got to chop the wood. You want a cup of tea you put wood on the fire and boil the kettle. I enjoy yoga. I enjoy the gym. I try and stay reasonably fit. If I could do whatever I wanted to do I’d travel, see a bit more of the world.”

Living off-grid isn’t particularly challenging for him, he says. “We’ve got a supply of food. It’s a bit more basic. We do have laptops. People play Xbox sometimes. We sometimes wire the Xbox up to the pedal bike, just for a bit of fun. Lots of people have loads of time. You have time to read. Sometimes money is a constraint, but then people work.”

After our interview, Jeremy picked some lemon verbena from the garden, and we sat in one of the warm huts sipping our tea.

It was an exciting experience meeting the people of Grow Heathrow with lots of unexpected twists and turns. I want to go back in the New Year to develop my understanding of off-grid living. I’m hoping for a time where they’ll be more welcoming, but until then I’ll have to make do with this article.