After her class for the day ends, Charlie* hops off her chair and heads right to the bathroom. The walls of her small bathroom have black paper plastered all over it. For some corners, she used a black towel with some duct tape.

Lighting equipment is placed on every ledge that didn’t hold a bottle of shampoo. Wires hang all over the room, some precariously close to wet areas like the sink. At the other end, there is fabric hung from the ceiling, draping over the bathtub as a makeshift green screen.

For many art students in the UK, this is their “new normal”. With the pandemic still raging and deaths rising, many universities have partly or completely shut down classroom teaching.

For art students, this means they lose access to many of the facilities they need for their course. Green screens, dark rooms, lighting equipment, professional cameras, a fully furnished studio and workshops are just the tip of the iceberg for art students like Charlie.

Lack of support from universities means that these students have to improvise with what they have and what they can afford. “Photography is one of the degrees that need the most of those school facilities. From dark rooms, computers, scanners, printers; none of that has been arranged for,” Charlie said.

“My flatmates and I have had to arrange everything ourselves, developing photos in our bath. Seeing how the university has little plan to help students create or even study the degree they’re paying for. Thankfully we have a good scanner to use, but if it wasn’t for that, I wouldn’t be able to create a single piece of work this entire year.”

Charlie studies photography at Glasgow School of Art (GSA). Over the past month, the university has been facing protests from its students over its lack of preparedness for the pandemic. The students demand that the university should stop charging full price for its tuition while giving them next to no support and facilities. 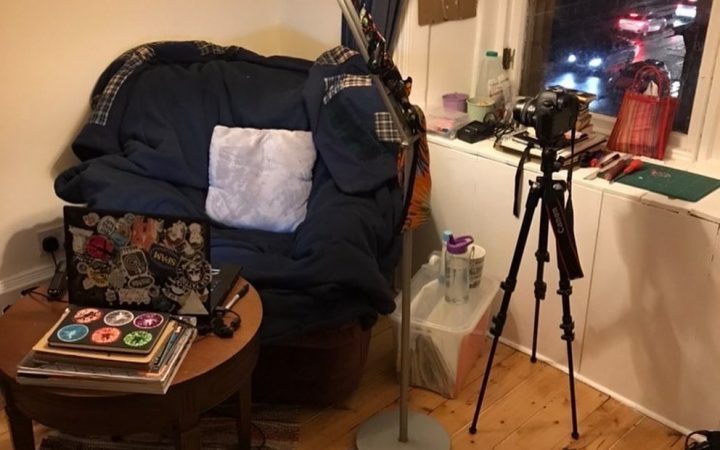 Charlie uses her bedroom as her studio.

“We came back and we were promised like ‘blended learning’ implying it would be blended between online and physical education”, said Spencer, another student from GSA. “They didn’t explain how anything was gonna work until just we came back. We didn’t have any studios for like a month in the beginning and then we had one day a week. Eventually, that was stopped as well so we’ve all basically done everything from home.”

Spencer does Fine Art Photography at GSA. For courses like his, one day a week of studio time was not enough. This would mean that they would have to bring something in on that day, and then not work on it for the rest of the week until they could visit again.

“They’ve provided nothing, no financial support for materials or in my class’ case, developing of film or printing,” Spencer said. “The film processing, printing, and other facilities have not opened at all this year, and they’ve offered no alternatives. They won’t take out the film and develop it themselves, they won’t subside us paying to develop it at a usually super expensive film processing lab and the facilities aren’t open at all.”

This story echoes throughout the UK. Pause or Pay UK is a student-led campaign started by a group of MA students from Central Saint Martins and the Royal College of Art.

They demand that universities either: “Pause all studio-based learners’ studies until they can safely resume the course they signed up for, or pay a rebate for loss of teaching, studios, access to facilities, and industry networking opportunities.”

“I came into this degree and uni specifically because of its reputation,” said Aly Zein Mohamed, a freelance videographer and a second year BA Contemporary Media Cultures student at London College of Communication. He also is a part of the Pause or Pay campaign in London.

Being a freelance videographer, he already knew the practical side of the course and expected to be taught the philosophical side of film making. But, he said, that’s not what he got.

“I have a module called film theory and cinematic practice,” he said.  “They’re not teaching that, they’re teaching videography. That’s my day job. I’m walking into my classes knowing more than what’s being taught. That’s a waste of money.” 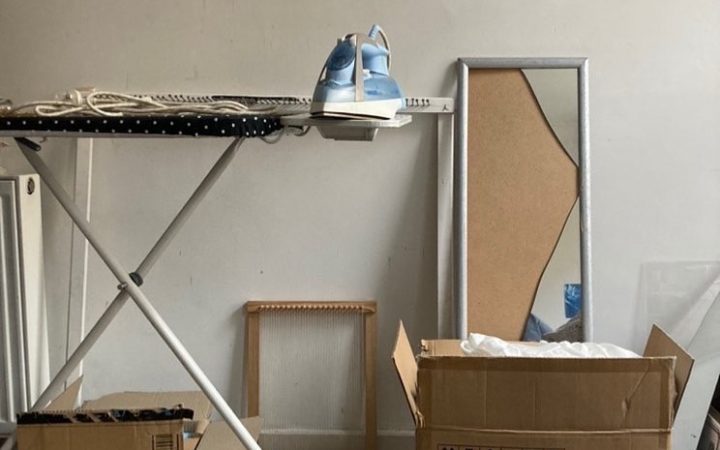 Spencer uses his living room as a studio [Instagram: @seapxnk]

Even though UAL allows students to borrow equipment for their course, students often find themselves unable to use them because they have a “course-specific access”. Even though he’s studying a course that requires him to make films, the university prevents Aly from using the professional cameras and lighting used in big-budget movies.

“I’ve come into UAL (University of the Arts London) to find out that all I’ve got access to is some crappy DSLRs, no sound mixers, and no lighting. So no actual sound department access, no lighting, no monitors, not even half the stuff I’m used to working with in film”, he said.

The pandemic made matters worse for Aly and his course. His lessons, including the practical ones, were moved online. “How are you gonna teach the practical concept online?” He asked. “Not only does my course teach videography over cinematic practice, but we also aren’t even learning with real cameras. The class exercises are ‘go through something with your iPhones’. How is that cinematic?”

“We have no lessons because of the pandemic. The quality of the course is crap and the fees are way too expensive. I have no class, no kits, no value. What am I paying nine thousand for? I’m getting nothing from the university.”

Pause or Pay also conducted a nationwide survey in July looking at how students view their online learning experience. They found 87.5% of participants wanted a refund for studio-based learners to be important government action, and 48.8% wish to proceed with online learning with financial compensation and/or courses to extend, as well as student visa extensions for International students. 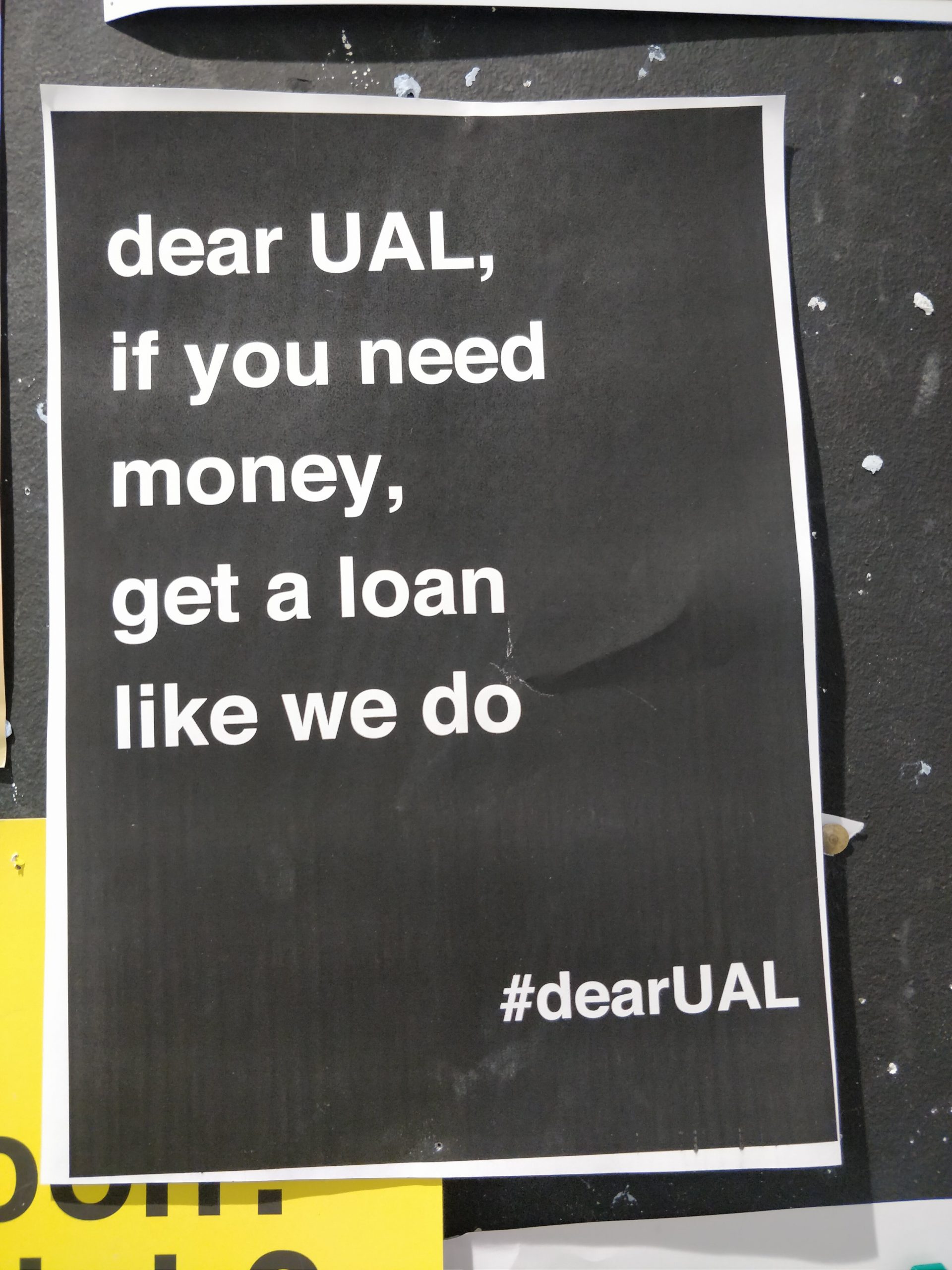 A poster at a UAL campus

This situation feels even less justified for international students, who pay fees as high as 22,000 pounds a year in top universities like UAL. Many of these students often get little financial support from home outside of their rent and tuition fees and have to work to support themselves. Since the pandemic, these students are facing double isolation, being away from family while also not being able to socialise as normal. All these circumstances make international students feel less like a priority and more like a cash cow for the university.

“I’m here protesting because I feel like the fees should be reduced at least to the level of local students,” said Mahesh, an Indian student from Goldsmith’s University. “Given the fact that our online and offline experiences have been impacted rather badly by Covid, charging the regular tuition fees is something egregious, and something that I do not agree with. That’s my primary motivation”, he told Artefact at a protest in London.

Many international students were threatened with suspension over delays in paying fees. For these students, it meant the possibility of being deported. The constant threat of being unable to pay on time loomed over their heads and affected their education.

“Being dropped out also would get me sent back to my country”, said Charlie. As a student from Mexico, she faced a lot of trouble in paying her tuition fees when GSA suddenly decided to change their payment method this year. 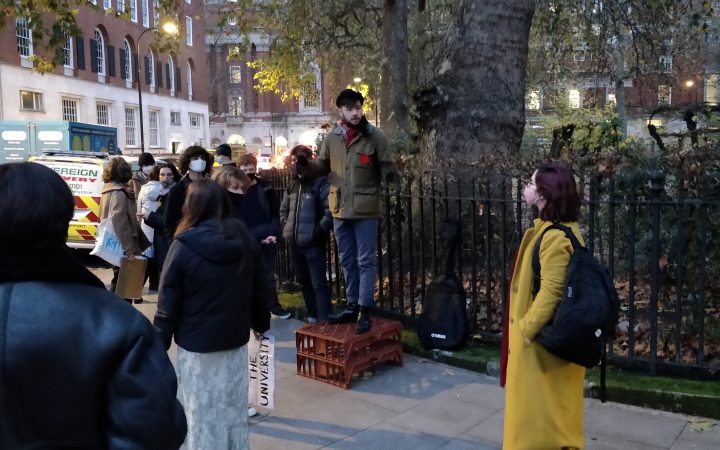 A student speaking at the protest in London [Ashkenaz]

“I tried talking to them and they still gave me the same ultimatum, I was ready to pay the fees any second, but they were making it complicated and risking me being deported,” she said. Despite sending several emails to school authorities, the issue hasn’t been resolved. “My parents are dead worried because 16k worth of fees is piling up due to the university not being able to do a single credit card payment, I am definitely not the only student going through this.”

“I remember thinking how proud I was being able to study at GSA, coming from Mexico, I was in denial for a long time about how they were treating us, now I’m just ashamed, and I’m afraid to say that I feel like all this work is for nothing. They just want us for our money, doesn’t matter what we’re going through.”

Elena then sent an email to the Dean at UAL, demanding their support for their course. The email was signed by everyone in her class. Eventually, they relented and they got most of their budget back. “Everyone signed, and it helped so much,” she said. “It took a lot of effort and energy but it’s such a big improvement.”

Elena now runs DearUal2020, an online students rights groups campaigning for the same causes that for other students and courses in UAL. Despite the slow progress, she believes there’s hope.

“No one believed in us. I need to push my fellow students so much to get their signatures. Our tutors didn’t think we’d get a rise in the budget again. It’s a matter of uniting and trying things out.”

A spokesperson for UAL said that current Department for Education guidance does not permit face-to-face teaching for our courses until “at least mid-February”.

“We believe it is better to give students some certainty about their learning experience, rather than hope for an early end to restrictions. Although we expect to deliver all teaching online for the whole of the spring term, we will reopen studios and workshops for self-directed learning as soon as we are able to allow students on campus again. For the summer term, we are committed to returning to the blended-learning model, subject to the national situation and government guidance,” they said.

“UAL has not made any financial saving during the course of the pandemic and, in fact, our costs have increased in almost all areas. The cost of making our buildings Covid-safe and running them at reduced capacity (when we were legally able to do so) has already run into several million pounds,” the university added.

“We are also aware that many students are experiencing financial difficulties as a result of the pandemic and so have expanded our welfare provision – with our Hardship Fund open to both home and international students.”

GSA declined to comment specifically on the piece but said they were in regular contact with both returning and new students providing up-to-date information on how our hybrid model of learning, would be delivered in the context of Scottish Government Covid-19 guidelines and instructions.

“Unlike at many universities, all students who had booked accommodation in the two GSA Halls and were unable to take it up due to travel or other restrictions are not being charged for any period when they are not in residence,” their statement said.

“Clearly, it was disappointing that the studios needed to be closed, but this was a requirement under the Level 4 restrictions. Unlike many other Universities we have already confirmed to students that we will have ‘no detriment’ assessment for the 2020-21 academic year,” the GSA statement added.

“Last week we confirmed that some bookable safe workspace would be available for GSA students who are currently in Glasgow and who do not have a safe workspace at home during the current Lockdown in which to make work.”

This article was updated on January 22, 2021 to add the statements from UAL and GSA which came back after the original publication date.