“Camouflage is immediately recognisable, yet it has contradictory meanings. Like the fragmented world that the pattern embodies, in socio-cultural terms, the camouflage pattern embodies conflicting connotations – violent yet peaceful, urban yet natural, conformist yet subversive.” – Sarah Scaturro.

Camouflage clothing is no doubt a print that you’ve seen dotted across high street brands as well as from high fashion labels such as Burberry.

Marie Claire magazine claims that camo wear is everywhere, functioning almost as a neutral, like leopard print or pinstripes.

What is now a popular statement to make, was once only a product of the army and ultimately of war. So why has the design become so popular, and what has it been through before landing on my shelves and on high fashion runways?

The word camouflage originates from the French language and translates from an expression meaning ‘puffing smoke’ perhaps referring to the likeness of camouflage being undetectable, like being covered in a cloud of smoke.

Camouflage clothing was originally developed during the early 20th century for the armed forces, to make them less visible to enemy forces during times of war. These designs were originally developed by American forces, but was soon adapted by French and English and used during both World Wars.

Although forms of camouflage will have been used for centuries by hunters and anyone wanting to avoid detection; camouflage is often seen in nature, from the bark-like coloration and patterning of many moths to the stripes of tigers and zebras – many animals, like frogs and deer, have evolved to be camouflaged in colour and pattern to avoid predators. 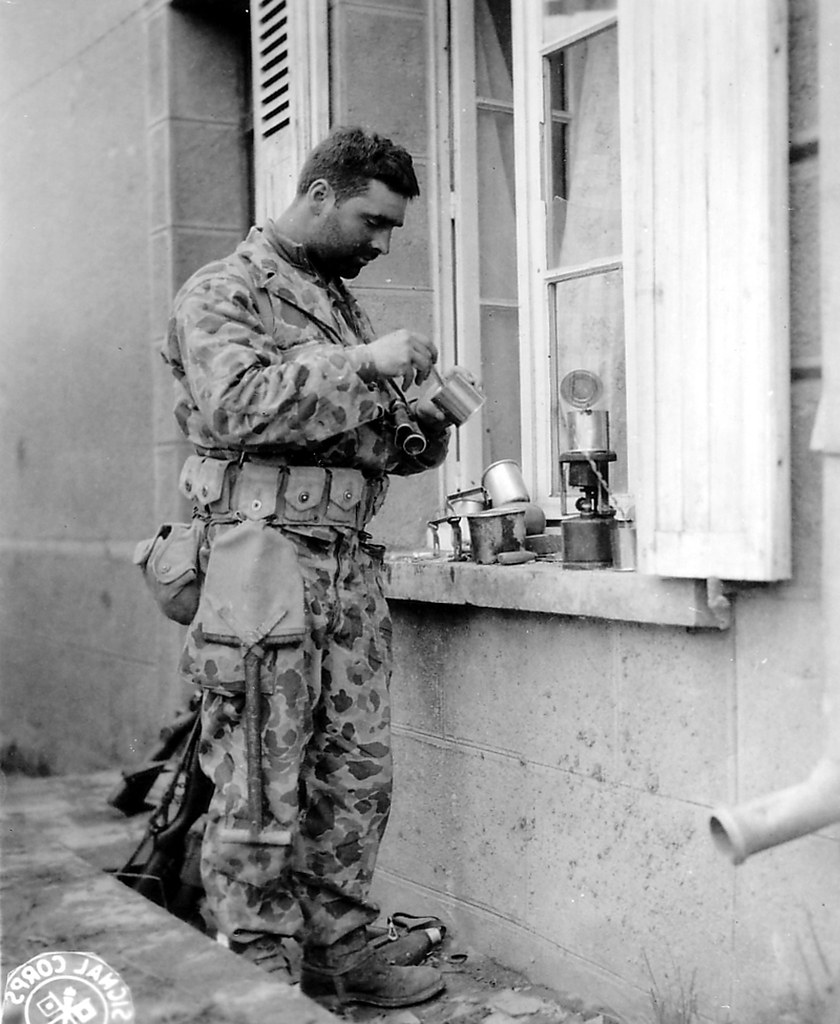 Camouflage was used in many conflicts and battles [Wikicommons: PhotosNormandie]

Soon after the Second World War, camouflage clothing had begun to make its way into army surplus stores, now used and useless to the forces.

Later, during the 80s and 90s people began to use the pattern for fashion purposes but the clothing was a symbol of anti-fashion and counterculture; it had an edgy, military style appeal. This meant that the style attracted a very alternative audience, with punks, rockers and grunge wearers adding ‘camo’ to their wardrobes.

Wearing camouflage took a sort of antagonistic, antiauthoritarian stance that said: “I will fight for my convictions. I am tough, and you don’t want to fuck with me.” It also suggested: “I don’t give a shit what I look like, but this is what Kurt Cobain and Eddie Vedder are wearing right now, so fuck you.”

According to Christina Buff, camo gear broke into the mainstream fashion world as early as in 1943, when Vogue did a story on the print and ran with the army trends and incorporated them into the fashion world.

“It basically just explained what military camouflage was to Vogue readers and its main function. It wasn’t until 1971 when the next article came and featured a trend collage on camo, with images of girls dressed in the tactical gear.”

Camouflage clothing today is used by designers and people alike in order to attract attention rather than to avoid it. The unusual pattern is a flair of abnormality in an everyday wardrobe.

Many designers have flirted with the print and we have seen camouflage on the runway from brands such as Moshino, who back in 2017 at Milan Fashion Week showcased multiple camouflage and military-based designs.

[pullquote align=”right”]“Camouflage is so prevalent, and can have so many different meanings, that it has become a fashion classic and neutral.”[/pullquote]GQ reviewed the designs and stated that Jeremy Scott’s collection for Moschino had a “military undercurrent (or is it overcurrent?) where standard issue silhouettes and tactical accessories were set against patterns as varied as ones featuring Transformer-like robots flying through space.”

In 2019 camouflage hit the fall runways in abundance with designers such as: Palm Angels, Sandy Liang and John Elliot showcasing camouflage at New York fashion week. As well as camouflage clobber hitting the runway, streetwear has seen it in brands such as Off-White who frequently include the pattern in their designs.

To gain some insight into the world of camouflage couture Artefact spoke to Sarah Scaturro, who works at the Museum of Art in Cleveland and also wrote her thesis on camouflage clothing.

“The power of camouflage is that it can shape shift its meaning. It operates on so many levels and is paradoxical at its core. For example, it’s a textile pattern designed to mask the wearer from observation – and yet, the pattern itself declares which nation, army, or group that the wearer belongs to.

“Similarly, it can be simultaneously conformative and subversive: camouflage can be worn to show that one is a patriot or supporter of the nation, while at the same time a protestor might wear it as a sign of subversiveness,” Sarah said.

“Camouflage is so prevalent, and can have so many different meanings, that it has become a fashion classic and neutral, much like its other military inspired color, khaki.”

Referring to camouflage clothing in high fashion and the ever growing market for expensive and couture clobber.

“Ever since the youthquake of the 1960s, trends from the street have always made their way up to high fashion. I think that beginning in the 1990s, fashion brands like Dior saw camouflage as an opportunity to be edgier, more novel, cooler, and more in touch with their younger customers,” Sarah told us.

“Most of the camouflage that fashion designers use, and what we today think of as the ‘classic’ camo pattern is actually a version of the US Woodland pattern that came out in the 1980s. What I think is really exciting is the brands like BAPE or Maharishi that created their own camo patterns that embedded symbols like bonsai trees or apes into it, which further adds a complexity in how we consider camouflage – a pattern designed to protect soldiers is now being used to sell clothes and promote brands and other kinds of symbolism,” Sarah said. 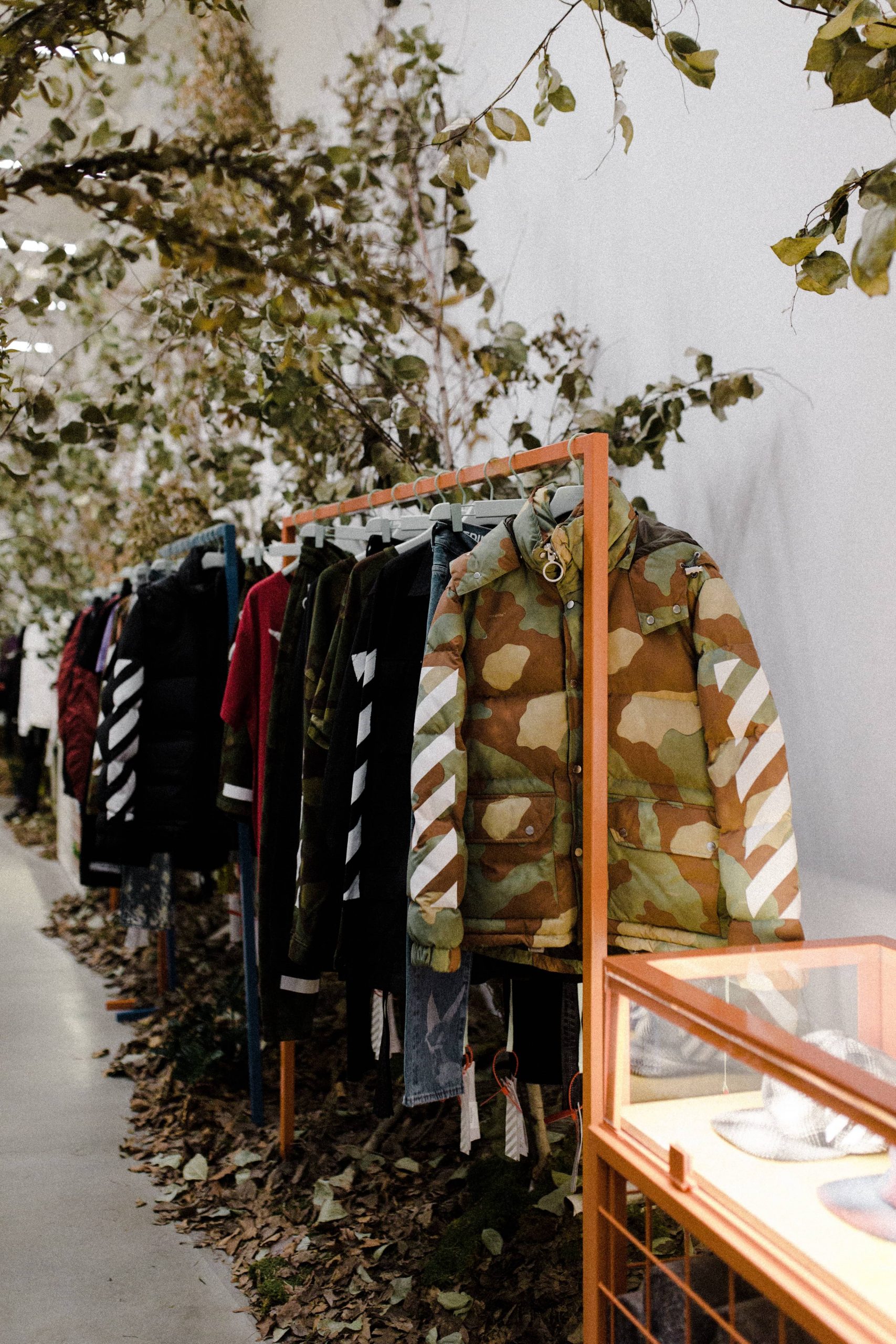 “I think there will always be a love for camouflage. Ever since it really became a fashion hit in the mid-20th century, it has had cycles of more or less uptake. The never-failing reality is that it always comes back into style. Another powerful thing about it is that it is a pattern that can be applied to all sorts of objects, not just fashion.

“You have camo-patterned dog carriers, baby bibs, car wraps, snowboards, you name it! Lastly, camouflage is not just one single pattern, but essentially any pattern that has heterogenous blocks of color (typically at around three or four colors) in a variety of shapes. The potential power for brands is that they can create their own camouflage that includes symbols, colors, shapes and even words, all which can link back to the brand identity.”

However popular camouflage clothing has become, Sarah still believes it is somewhat a controversial statement to make: “I think it still has a tiny bit of edge left to it – I mean, imagine someone in the government wearing a camouflage evening dress or tuxedo (not a uniform!) to an important ceremony, or a bride or groom wearing it to their wedding, or a business person to an important meeting. It would still make a statement that showed the person wearing it had an edge. I personally love wearing my Belgian camouflage jacket that I was able to woo off of an actual Belgian sniper! Of course, I wear it with red lipstick, heels, and dark eyeliner, like any proper fashionista.”

Camo wear is clearly no longer just about actually being camouflaged, but is an ironic twist now about stand out from the crowd. People are choosing to be bold and make a statement by wearing clothes that were originally intended for military operations and war.

So is the message a bold and daring statement or simply undermining the essence of what camo wear is intended for?

Conflicting views will always be held about camouflage clothing, however with the print falling in and out of fashion for decades and with it seemingly, firmly on our shelves and on couture runways for the foreseeable, it has definitely become a clear classic.