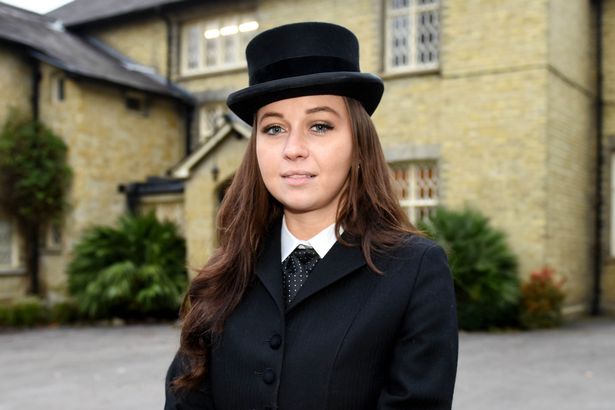 Typical responses to the question “What do you want to be when you are older?” are usually: Ballerina, astronaut, doctor and even these days, a Youtuber or an influencer.

“Funeral Director” rarely gets put forward and it was not something that 27 year-old, Mollie Stoneman had ever considered.

However, many years after those sorts of questions stopped being asked, at just 22 years-old, Mollie found herself joining her family’s business – Stoneman Funeral Service – a company that was established in Redhill, Surrey in 1865 and is now a sixth generation family business.

It was the loss of her grandfather that inspired her to join the business: “When our grandpa died we had a horse drawn hearse and I knew everyone working on the funeral. Their kindness and comforting manner made a very sad day more bearable.  I just thought ‘I want to make other people feel like this when they’ve had a bereavement, I want to be that person for them’.”

The journey to becoming the second female director of the family business was by no means a quick one: “Being trained how to use the software, sitting in on funeral arrangements. Then after six months of that, I did a funeral service awareness course, then a diploma in funeral arranging and administration.” This experience and education allowed Mollie to actually start arranging funerals, with her first taking place in January 2017. 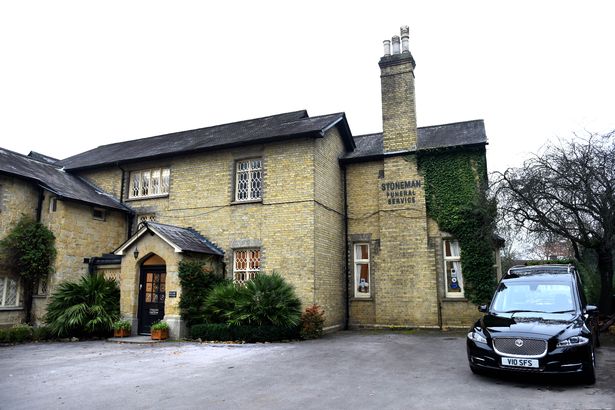 Stoneman Funeral Services is based in Reigate [Ben Mole]

“It is definitely a male-dominant industry. Obviously, lifting coffins and the bearers, 90% of the time, they’re going to be males. That’s where women are least represented but you do get noticed more. You stand out amongst old, white, males. So I quite like it,” Mollie added.

It is somewhat surprising that such an emotionally-heavy job is dominated by men. As we are so used to a world where men run it, according to Laura Lorenzetti, senior editor at LinkedIn: “Women are gaining the skills and education needed to get in the door within specialized careers, and in many cases, they are gaining those skills at a greater rate than men,” with Mollie being a prime example.

Dr Marco Iacoboni, director of the Neuromodulation Lab at the UCLA Ahmanson-Lovelace Brain Mapping Center proved in a study that: “When watching others in pain, women’s brains show more empathy. In females, the area that mimics the pain of others shows a bigger response. That’s an indication that women’s response is more empathic; they’re feeling other people’s pain more than the male participants are.”

Mollie went from directing small and intimate funerals to ceremonies of up to 300 people, the largest one being for a paramedic: “It was on BBC News, we had people lining the whole street. That was really hard not to cry whilst walking in front of the hearse. It was really overwhelming because of the amount of people there and the amount of lives they had obviously touched.” 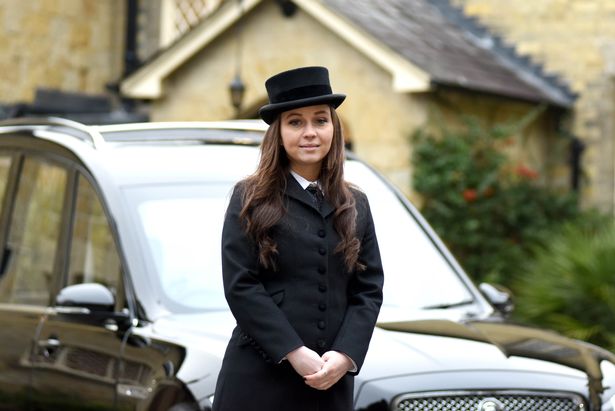 With so many aspects of our lives being modernised, Stoneman’s stick to the traditions that are deep-rooted within the business, one of the most obvious being the funeral director leading the hearse: “It’s a mark of respect. People find it really comforting because we are escorting their loved ones to their final place. A lot of them don’t know it happens until the day,” Mollie told us.

Once the hearse arrives at the service, all the Stoneman staff will be standing outside, they will all then bow, in unison, at the coffin, as will the minister or whoever is taking the service. “It’s definitely the marks of respect that have carried on through,” Mollie explained.

All businesses have had to adapt during these Covid-19 times, but Stoneman’s have had to adapt in ways many of us wouldn’t have even thought twice about. “To be honest, at the beginning, it was a very blasé thing, and then it hit at full force. It was such a shock, it happened all over a weekend,” Mollie admitted.

“At one point between our two sites we had nearly 100 bodies. It was just awful. Everyone really pulled together, we have an amazing team.” 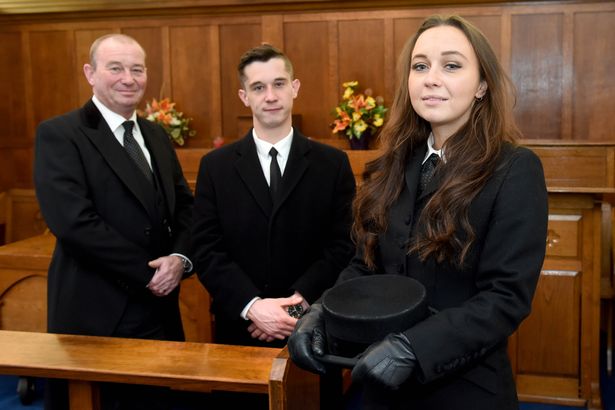 With limited PPE resources and no clear guidance at the beginning, Mollie had to make some tough decisions: “Straight away we stopped carrying coffins. We didn’t know enough about how the virus spread, we didn’t know if it was a good idea for the boys to be putting their faces near coffins. The best thing was to be overcautious,” she said.

There were a lot of grey areas and ‘rumours’ about the spread of infection after death within the industry at the beginning of Covid-19. “Initially we were told that apparently Coronavirus stays infectious 3-72 hours after death. We’ve also been told it’s only when you initially move the body and the air comes out of their mouth. So the whole time, you have a mask on before going near the body and the first thing we do is cover their face.”

Since then, the government has provided a guide for the handling and care of deceased: “Any infection risk from people who have died as a result of confirmed or presumed Covid-19 will primarily arise as a result of droplets or aerosols generated in postmortem handling of the body, or by coming into contact with contaminated surfaces,” the government website says.

The guidelines go on to say: “The wearing of PPE that should include disposable gloves, fluid resistant face mask, water-resistant apron and disposable eye protection (can be achieved by use of a surgical mask with integrated visor, full face shield/visor, or polycarbonate safety glasses or equivalent.” 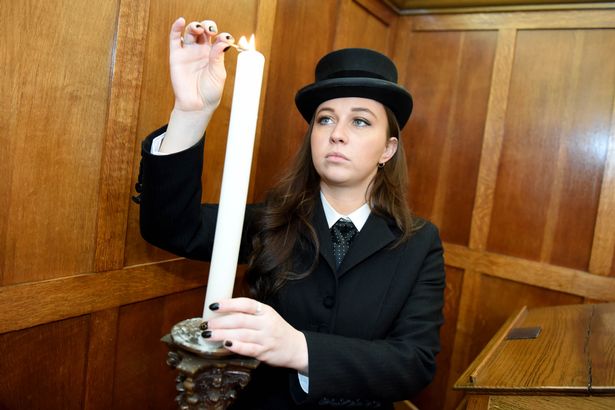 Many of us hope to never see a dead body in our lifetime but for Mollie, it is an everyday occurrence: “I check through when bodies are being embalmed in the mortuary. Embalming is the process where a body is preserved by using chemicals to slow down the effects of decomposition. The embalming process can help make the person appear restful or can even help with the effects of disease or other causes of death, or if they’re dressing someone.

“It isn’t a shock anymore. It is very normal for me now. At viewings, it’s just a relieved feeling when you see them and they just look peaceful. It’s comforting to know that the family is then going to go in and see them like that too,” Mollie told us.

Although it is a normality in Mollie’s life, it doesn’t always come without feelings of great sadness, she went on to say: “I have witnessed really sad ones, like a teenage suicide and a domestic murder. I couldn’t be as involved with the domestic murder one. I saw her and it was just awful. Those ones really stick with you and I get really tearful.”

There is no magic potion to take the pain away from her job. Like you and I, after a bad day at work, Mollie finds the best release to be “a big cry to get it out of your system, because it is like you’re holding someone else’s grief.”

Regardless of the grief and sadness Mollie deals with on a daily basis, she couldn’t see herself doing anything else, and she’s now thinking about the future of her career within the company: “My business partner and I have set up a thing on the side. We’re going to start designing software for funeral services. Anything I could find to improve the service for our funeral directors and those across the country. It’s not a normal business, it’s grief. Anything I can do to make that easier for them.” 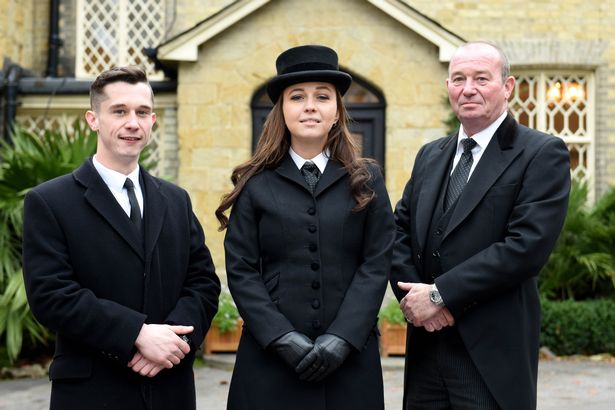 Whilst that’s one thing she can change, she told me the only other thing she wished she could change is “the way the media talks about us. A lot of the time they’ll report on big chains, who employ bank managers, people who don’t have the right training or experience, not having the grief factor mixed into it. It’s not always a business decision, its ‘OK this is going to cost us a bit more but it’s going to make it easier for that family’.”

Grief is a serious thing, something we will feel within our lifetime and something no one knows how to prepare for. According to an article from Psychiatric Times, “The normal reactions of grief overlap several symptoms of depression and anxiety disorders. 40% of grievers meet the criteria for major depression one month after their loss, and 24% still meet the criteria after two months.”

Unlike nurses, doctors, carers and other front line workers, funeral services tend to go unappreciated and unnoticed. But that is exactly what makes Mollie so exceptional, she is there to pick up the final pieces, honour strangers she never knew and comfort strangers she has just met.

It is not a normal nine-to-five job, nor is Mollie – the kind face you’d expect to be greeted with when arranging a funeral, but thank God she is. Mollie is pioneering in her field, not only her presence as a woman, but the way funerals are viewed.

I know for sure when the inevitable time of grief comes for me, I want someone like Mollie to help me take the first steps of overcoming it.