Behind the lens: Filmmaking during Covid

As the pandemic upended our world, as well as the ensuing lockdown, many of us turned to the arts as a means to cope. Be it music, movies, live streams, or binge-watching all six seasons of Schitt’s Creek. It was, and is, an escape from reality – which in 2020 proved grim viewing.

For those who make a living in the arts, having jobs cancelled, projects indefinitely postponed and no possibility of working from home, lockdown meant an uncertain future.

They also face unique challenges; the need for creativity and the loss of everything that inspires it. But it is said that creativity thrives best when constrained, and what better than a national lockdown to achieve that.

This was the situation that film-making students at Goldsmiths University found themselves in during the first national lockdown. Having met during their masters and with a now unviable film already in pre-production, the pandemic threatened their graduation film, Mari Lwyd, and inspired a new one, Once Familiar. 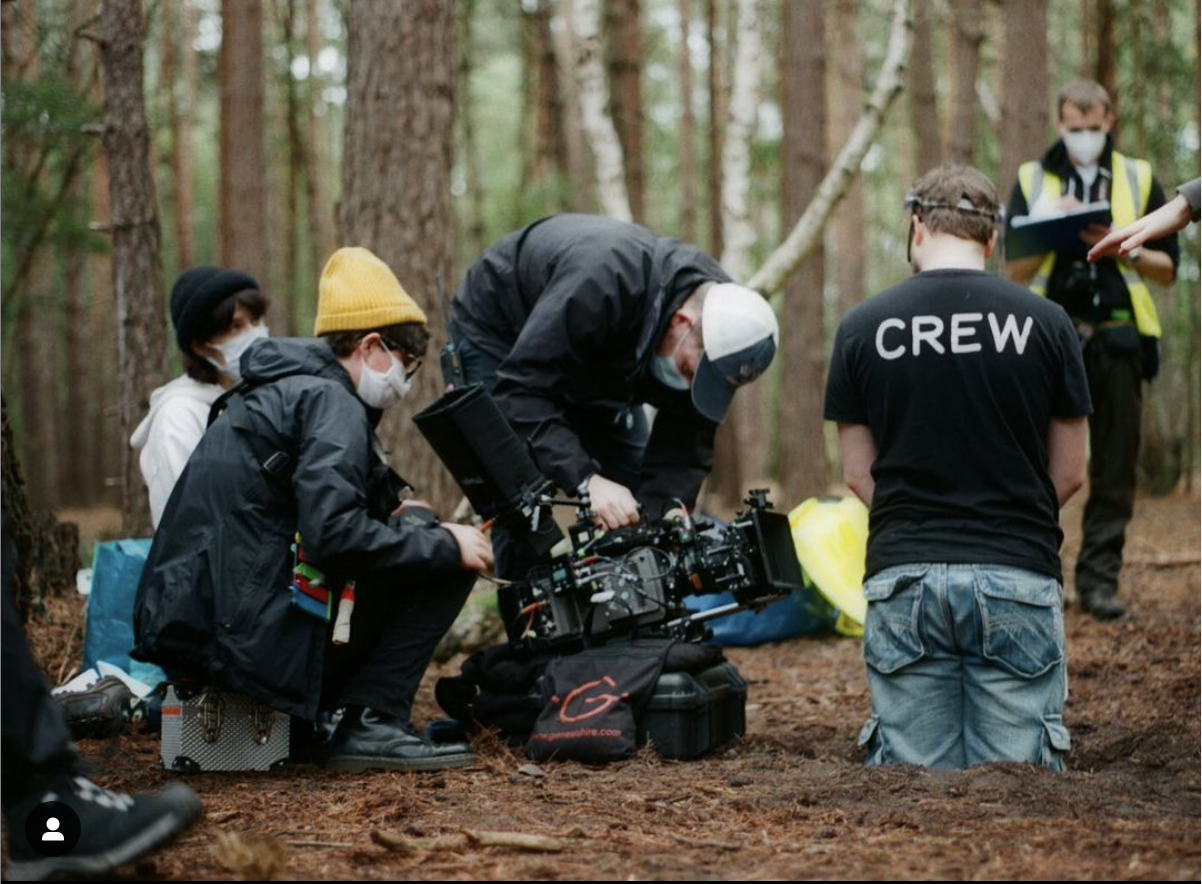 Rubén González, writer, and director behind the film, told us of the initial anxiety felt during the lockdown: “We were in the middle of pre-production when Covid cases started rising, and the lockdown was imposed. We didn’t know anything about what would happen for weeks, no-one was prepared for this, including big institutions and the film industry.

“Those were incredibly uncertain times, and we knew we wouldn’t be able to shoot Mari Lwyd in May. There was still a bit of hope until we eventually got confirmation the university had cancelled our shoots, but there remained a possibility we could make a smaller-scale film in the autumn,” he told us.

It was during this period of uncertainty that González conceptualised Once Familiar, having been forced back to the drawing board, he remembers “long nights of writing random words and sentences, I had no idea where it would end up going. And it slowly started taking shape, the story started writing itself, out of intuitive feeling, and I had no idea what exactly it all meant, I figured that out much later, and it was incredibly exciting when I did.”

The crew describes the eight-minute supernatural thriller as a “representation of the mental struggle of growing estranged from oneself. Being stuck in what can sometimes seem like a predetermined existence, moving around in circles rather than moving forward.”

The film does not aim to be a commentary on the pandemic, but its story draws parallels through the many lockdown experiences, such as coping with deteriorating mental health and cycles of self-destructive behaviour. It touches on these realities in visually striking and unsettling ways.

As was to be expected, Covid did play a role and affected the whole production process, including the film’s shaping. Limitations meant the cast’s size could be no larger than two, no intimacy was allowed, and an outdoor location was preferable.

Though a new, Covid-safe, proposal was able to be developed, there remained a real threat that they could graduate without producing the film.

“Absolutely every aspect of production becomes more expensive in a Covid-19 reality.”

Lex Guelas, editor and associate producer on Once Familiar, is an international student at Goldsmiths: “Most other universities converted their programmes to solely being online, but for a production-based masters in filmmaking this possibility was incredibly worrying particularly because these grad films are what we intend to take with us to find work in the industry.

“As an international student paying for everything with loans, I would’ve felt cheated if we weren’t going to make a film,” she added.

If the threat of graduating without a film was not stressful enough, the students also had to consider the financial burden they were taking on.

Though their university offered state-of-the-art cameras and professional equipment for shooting, the crew themselves needed to cover the production costs and ensure it was set in a Covid-safe environment, which runs into the thousands.

Fellow collaborator, and producer on Once Familiar, Wojciech Czarkowski told us how “Absolutely every aspect of production becomes more expensive in a Covid-19 reality. From masks and additional hand-washing stations to individually pre-packaged dinners, a large chunk of the budget needs to be ring-fenced, and there is much less room for cost-cutting manoeuvres as people’s health and safety, more than ever, come first.”

To cover the production costs, the students set up a Kickstarter campaign with an initial target of raising £2,500 to ensure the film could happen. As an incentive, rewards such as a ‘development collection’ detailing how the film was made, and props from the set were offered.

Czarkowski, who set up the fundraiser, detailed how they could make the shoot Covid-safe: “Departments have to stay in bubbles and not socialise with others. Meanwhile, a specially-appointed Covid supervisor constantly makes sure the safety etiquette is being respected at all times.”

These factors are what make shooting significantly more expensive as well as challenging, as Czarkowski admitted: “it’s a working environment we are all still getting used to.” 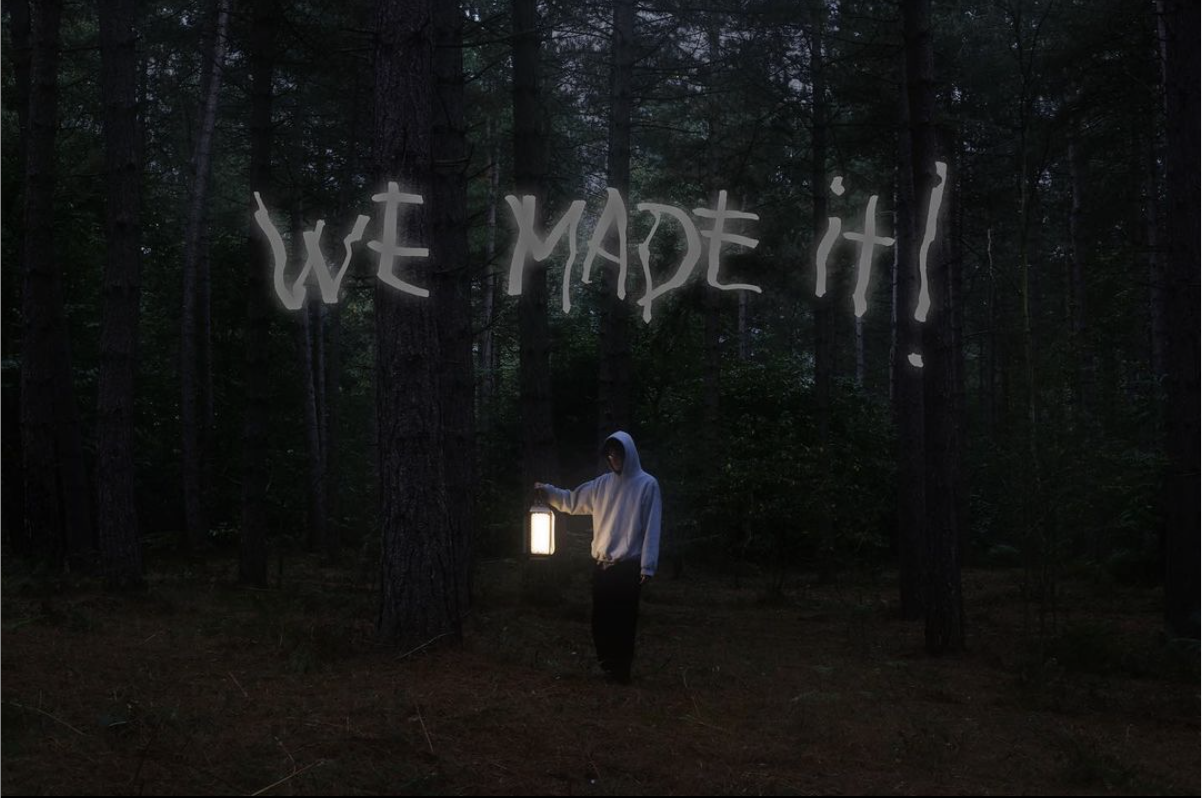 Perhaps a sign of the solidarity found amongst us during the pandemic, they were not only able to meet their goal within just five days but after setting a stretch goal were able to raise more than £4,000 to make Once Familiar the visually striking film they hoped to create.

González told us how he “can’t believe the generosity of everyone that contributed, especially during the times we are living in. We are incredibly grateful to everyone; I still can’t believe it happened.”

This feeling is shared by Guelas: “I was really quite surprised and touched by the number of friends and family back home who were able to donate.”

Guelas noted how creating the film during the pandemic made them push themselves further: “The circumstances that we had to work under really put our creative problem-solving skills to the ultimate test. Knowing that our loved ones funded this project during such strange times was a huge motivator, on top of the personal standards we had for ourselves, to begin with.”

Echoing this sentiment, Czarkowski adds that “raising money through crowdfunding puts more pressure on you to do your best. We have had just under a hundred people donate to our campaign, many of them our friends and family. They put their hard-earned money into our project and are waiting to see the finished product. I often feel that expectation on me, and that drove me to go the extra mile.”

González explains the crew were “lucky to have had the shoot scheduled during the little window between outbreaks and lockdowns.

“By the time we shot, we had all become very familiar with and sort of used to how to interact with each other and how to behave to be safe. It was hard to communicate with the crew while all of us wearing masks. A lot of communication on set is physical and not being able to see each other’s faces made it feel a bit cold sometimes,” González added. 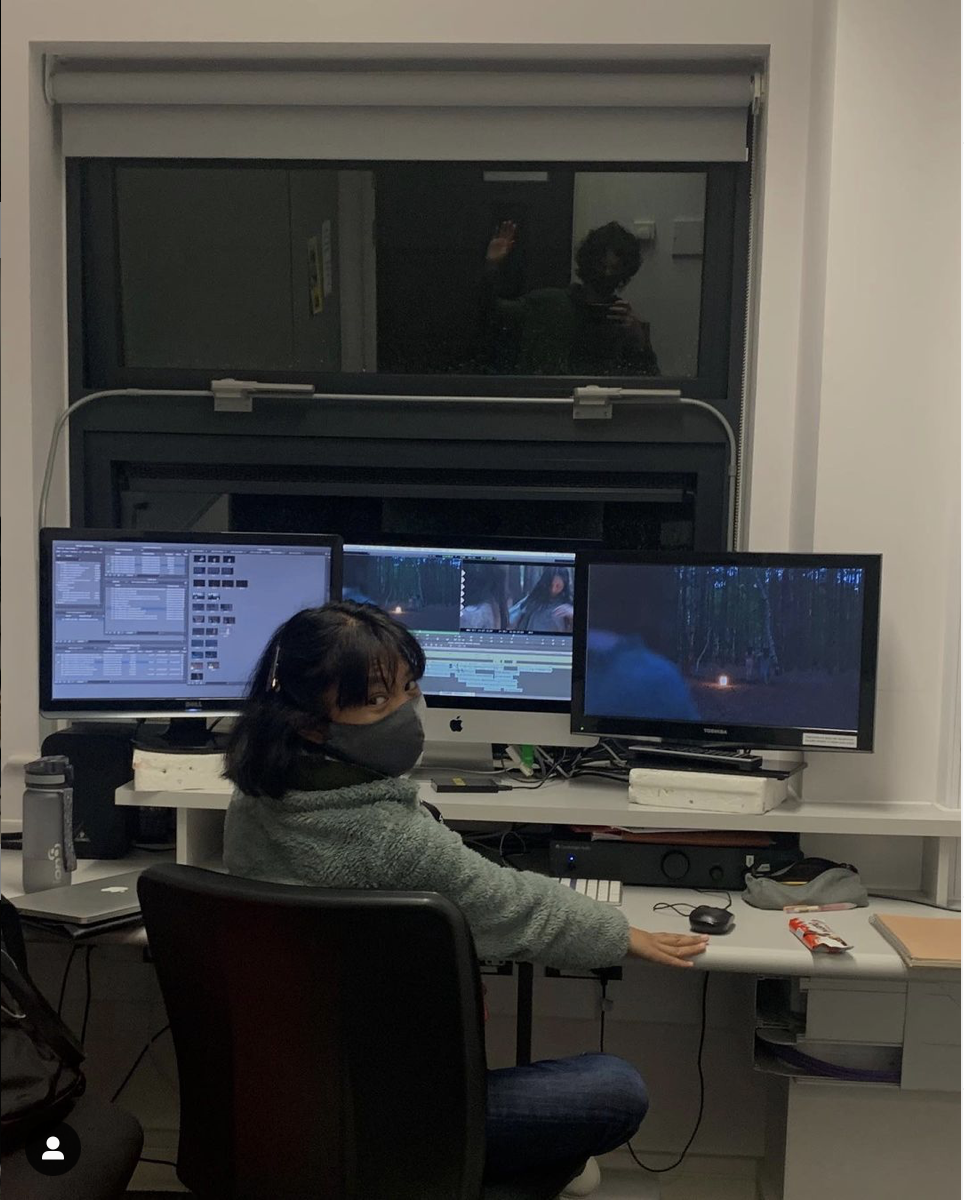 Though the crew could adapt to a new way of working alongside each other, anxiety remained during shooting over the pandemic. Indicative of these times is the anxiety of getting Covid, and its consequences, for González it raised questions of “what happens if I get the virus and I can’t go to the shoot? Will someone else direct it? Will I direct via Zoom?”

He recalls the fear when, every morning, the Covid supervisor would take his temperature, “I was sure every day that it would show a high temperature just because of how afraid I was for it to happen, it was as if I could feel my body getting warmer as I saw that gun-like thermometer getting closer to my forehead.”

Thankfully, these fears were in vain as the entire crew and cast got through shooting safely, a testament to how their fundraising efforts ensured the project could be Covid safe.

However, during post-production, González discovered the pitfalls of working from home with a dodgy internet connection, as he needed to self-isolate due to a housemate testing positive for the virus.

“Editing via Zoom was a nightmare, especially since I did not have a very good internet connection at the time, but Lex and I figured out a workflow to handle the situation, and I think it worked out pretty well as a solution until I could go back to the edit suite.”

The project was a labour of love for all involved and their passion for it is evident, but they admit they couldn’t have done it without the efforts of the head of MA Filmmaking at Goldsmiths.

Producer Czarkowski told me how the team were “anxious” that their projects would be replaced by written assessment, as many institutions were forced to do in response to the pandemic, he added that they were “incredibly lucky with the head of the programme who appreciated how important making these films was to us and pushed back until we got the green light to shoot.”

González admits the thought of their final projects being cancelled “terrified” the team, and that he is “incredibly grateful” to the head of the programme for working so hard to ensure their shoots went ahead.

He doesn’t believe Once Familiar would have occurred to him if it were not for the events that preceded it: “It was this rollercoaster of circumstances and the bizarre environment that we were in that originated the concept.”

Hope for us all that though the pandemic has changed many things in the past year, a silver lining can always be found.

While arts universities understand the needs of their students, the government’s treatment of creatives throughout the pandemic leaves plenty to be desired, the suggestion that those in the arts and creative fields needed to retrain in other more traditional roles was widely, and justly, condemned. Czarkowski’s stance on this is clear: “They can go to hell.” 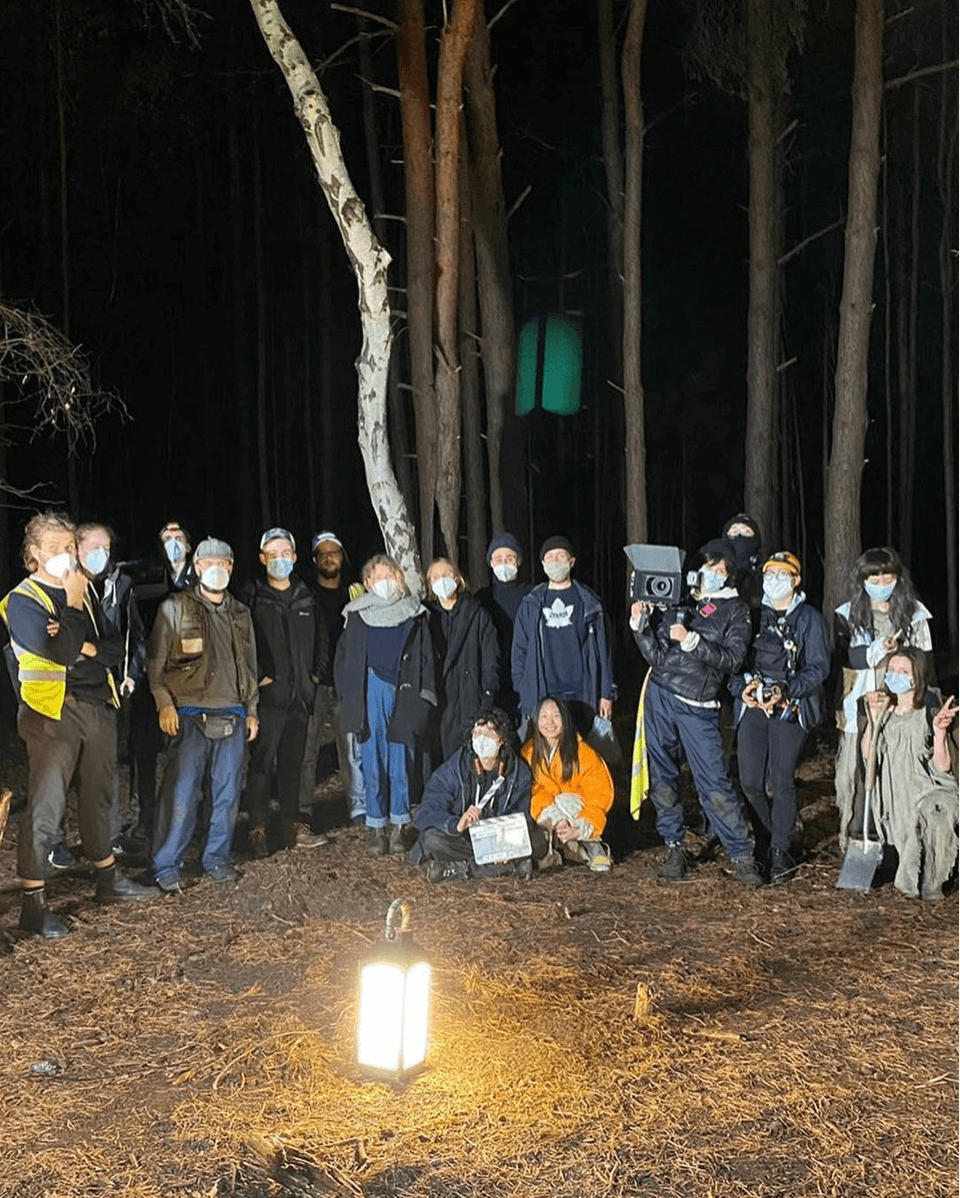 The crew on the last day of filming [Instagram: Once Familiar]

This feeling of contempt is felt amongst those in creative industries because of the way they are viewed, especially by those in power. Guelas’ advice to government is to “stop treating artistic expression as a hobby but rather a necessity. People do not devote their lives to creative work because they want to; they do it because they need to.”

Speaking to the crew behind this film we get a true sense of the passion they hold for it, not only because it is the culmination of months of work, but because of the times they found themselves making it in. It acted as more than a grad-film, it provided a focus and a drive in a time of uncertainty and fear.

Looking back over the time spent realising his vision, González told Artefact: “Every day for the past six months I would wake up and go to bed thinking about Once Familiar, and I sort of feel very lucky for it. It would have been much harder to cope with this pandemic if I did not have anything so exciting for me to keep myself busy and look forward to during all these months.”

They realise the achievement they have made. Hopeful for the future, Czarkowski says he is “amazed by my team and myself. Making this film has been the biggest challenge of my life so far and having actualised it makes me feel like I can do just about anything now.”

A true sign of the times though, the crew could not have the traditional wrap party once post-production had culminated. González tells me how he wished the crew could have “simply gone to the pub, or just have dinner with the whole team for some closure and celebration with everyone involved after all the stress this has been.”