“Unlike the music industry, where strict copyright laws have slapped the likes of Robin Thicke and Pharrell Williams hard, plagiarism in design is a much tougher task to prove; especially so with the financial disparity of a Zara and a Tuesday Bassen; social media, though, has allowed creatives to at least alert the public to such wrongdoings.”

The competition for up-and-coming designers is fierce, and social media sites such as Instagram are such an important platform for creatives to showcase their work. But what happens when hard-working, independent designers come across designs on fast fashion sites all too similar to their own?

Unless items have been trademarked by the designer, a process which costs money that creatives sometimes don’t have, the power of advertising and social media means that designs could be pinched.

Loopholes in copyright laws also mean that fast fashion brands can take designs off the runway and recreate them almost instantaneously. HuffPost wrote that “High fashion is basically a muse for designer copycats.” 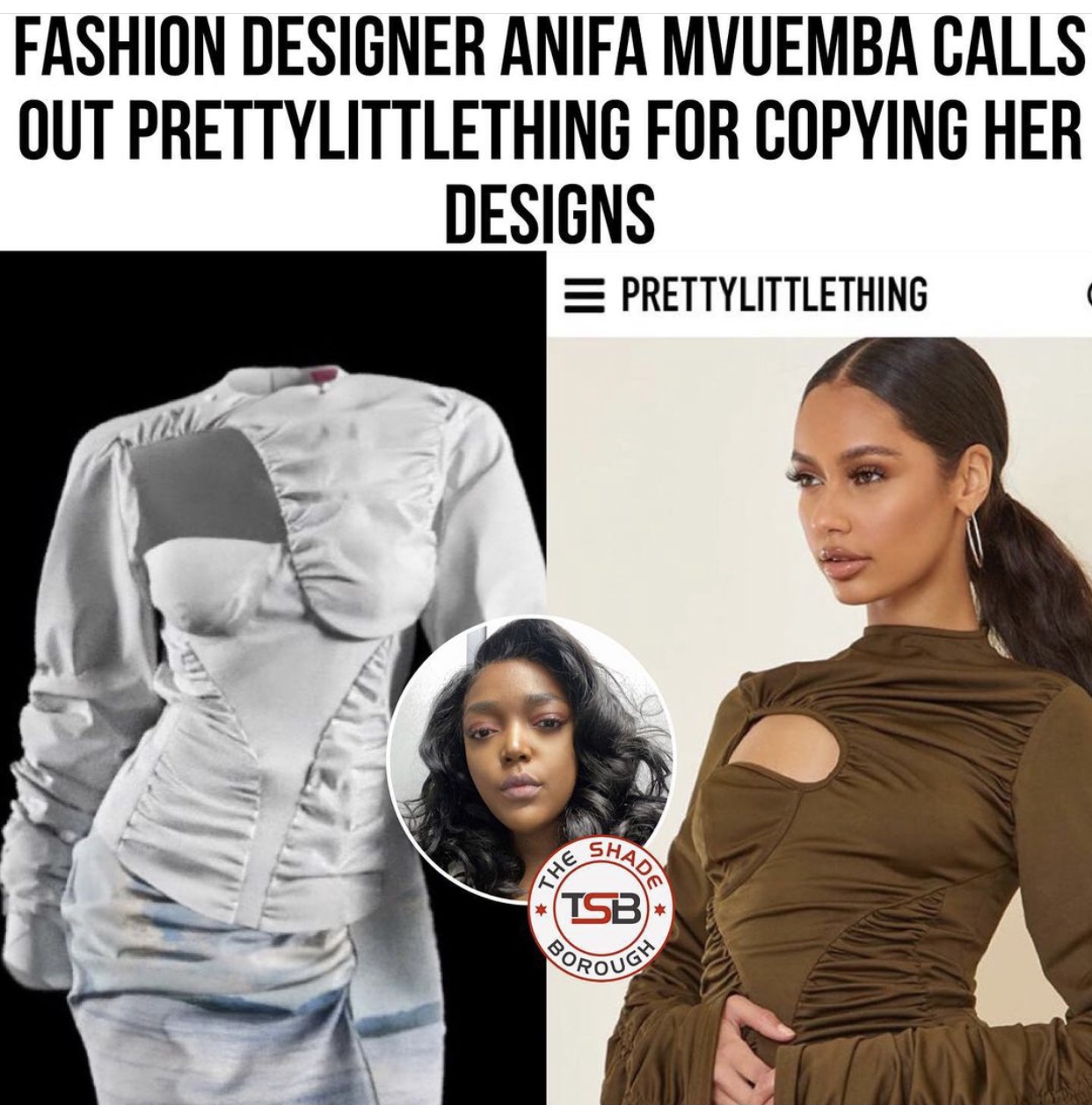 This is just another reminder that power and money normally and naturally come out on top. Fast fashion labels have the money to fight accusations from smaller businesses and in some cases, can and will issue “cease and desist” letters to independent designers to silence them.

On many occasions, fast fashion brands have been accused of ripping off independent designers ideas. Many up and coming creatives have taken to social media platforms to express that they believe clothing designs have been copied by big brands and put to market, almost overnight. Designer Anifa Mvuemba called out Pretty Little Thing for allegedly copying her designs, taking to Twitter to comment: “I usually don’t speak on these things; however, Pretty Little Thing is trash for this.” Along with the images of the “knock-off” versions of her fashion designs.

Designer Jess Craig took to social media site Instagram to describe her situation after finding out that fast fashion brand “AliExpress” had ripped her work off.

“It’s been such a long journey to finally start my small business and get out there than to come home from work to find out something I have worked so so so hard on has been copied onto a fast fashion Ali Express!!! It’s not the first time I have seen this happen and I’m sure it won’t be the last, but it needs to STOP. Stealing small independent brand designs is one thing and using photos without consent is another.” 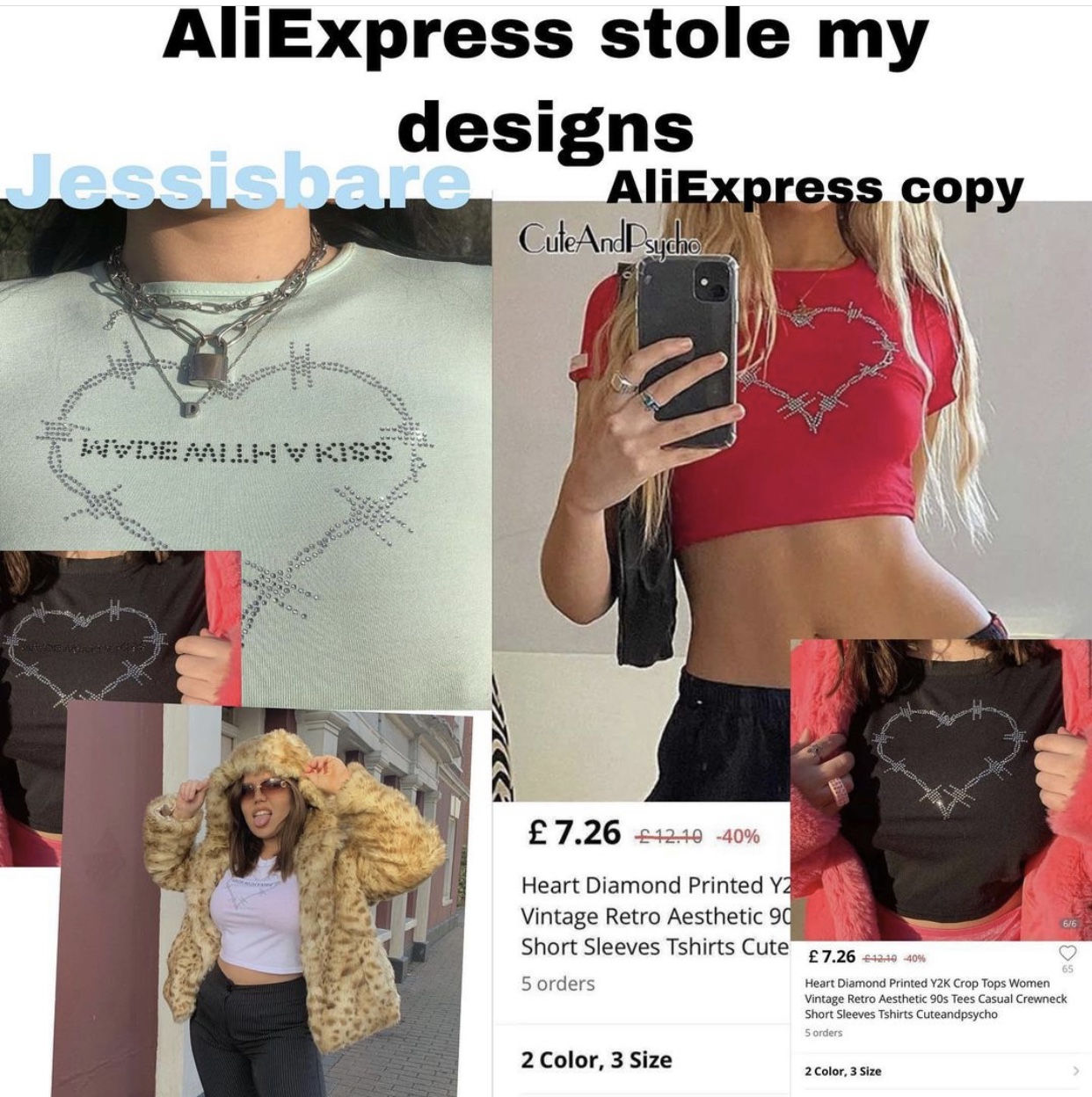 Jess went on to say: “I hold my hands up and I have been a culprit of shopping on fast fashion websites, but it will now stop, I know it shouldn’t have taken me to the point of my own designs being stolen. I have for the past few months been shopping second hand on other sites such as eBay and Depop and always researching the background of companies to see how things are made and manufactured.”

Another instance is when, according to The Bear Jai Nice, the founder and brains behind Kloset Envy, has claimed that Fashion Nova stole her designs on several occasions.

Jai founded Kloset Envy at only 18 years old and now has more than 775,000 followers on Instagram. In 2018, Nice accused Fashion Nova on social media to order clothes from her online shop, copy the designs, and then return them.

Fellow independent designer Aimee Smale, from Essex, was left devastated after stumbling upon an almost perfect copy of her £135 blazer design, on Pretty Little Thing for just short of £30. She claims to be convinced staff at the Manchester-based retailer saw the unusual jacket.

Several PLT buyers had followed her business Instagram account not long before the item appeared on the site. Aimee took to Twitter to write about her frustration “As a small business and independent designer. I want to be heard. The Fast Fashion Industry replicates years of hard work in a matter of minutes & it is NOT fair. Please read and share.”

Pretty Little Thing has been contacted to respond to the allegations, but are yet to comment.

A poll conducted on Instagram showed that 56% of people who answered would still wear fast fashion after copyright claims, whilst 44% said they wouldn’t.

So whilst some are consciously moving away from fast fashion, there is still a huge market for these affordable and fast items, which makes it almost impossible to police the problem of design theft. It is also hard to prove these allegations. 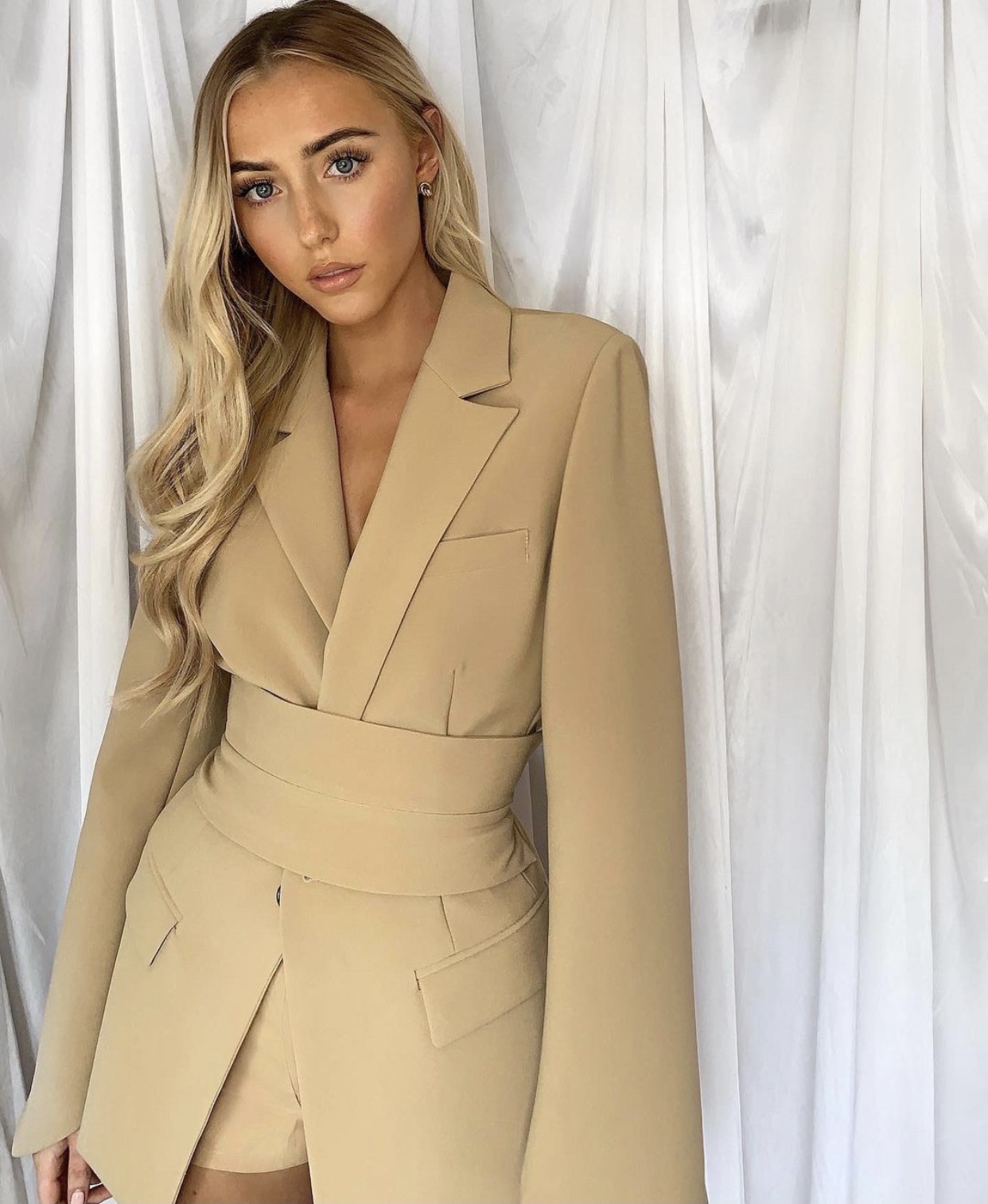 Anna Herman, ethical designer and owner of eco clothing line Herman’s Eco Inc is another creative who feels she has had her concepts stolen over the years.

“I feel like these big brands have snuck into my dreams whilst sleeping and copied my brain. Several years ago I came out with a suit. It took a lot of courage to design like that. Then one of the big companies puts out the concept like it was their idea. It isn’t the first time these big dogs have done this. My carpet bags are being knocked off by another big dog. My designs are original enough so that I can tell and I make my designs extremely hard to copy and have been copied many times,” she said.

“I hope things will change for the better. I should, at the very least, be receiving royalties on everything that has been bootlegged. I sell very little on Etsy anymore because they don’t protect the talented people that sell on the platform.

“I don’t see fast fashion changing from within. They are good at greenwashing. It’s the independents who are driving the shift. As I have said previously, I am here to break every stupid rule the fashion industry has ever made. How long do designers need to emerge? Fast fashion is a master manipulator. We have a long way to go.”

Fast fashion brands such as Pretty Little Thing and Missguided are a firm favourite online clothing store for many. With their target audience predominantly young women, Instagram is often swarmed with outfits conjoined with PLT tags.

Fast fashion has and always will be a huge industry surrounded by a lot of money and popularity. Still, it is clear to see from independent designers allegations that there is work to be done on the relationship between productivity and authenticity.

Many creatives feel that fast fashion labels take away from the hard work, time and money it takes to produce clothes ethically and as a new and up and coming designer.

But the harsh reality is that money and power talks, and big fast fashion brands will continue to have both. Social media continues to be a powerful tool in spreading awareness and carrying the accusations.