Swiping through Instagram, I found myself looking through my favourite Instagram account, The Shade Room, to pass time and catch up on celebrity gossip. One of the posts unfortunately featured my favourite City Girls (Miami female rap duo) band mate, JT.

The Miami native and rapper (who’s verses I know all the words to by heart), was being virtually scolded by the gossip page’s followers for tweets she had shamelessly posted in the past. The most recent tweet from only two years ago which garnered the most attention.

It read, “I love pretty dark skin girls, not tooo crispy na! But the milky ways be the shit.”

JT is not the only notable rapper to publicly express her dismay for people with darker skin tones; Saba Baby, after releasing a song with during the Autumn of 2020 was criticised by listeners after some of his old tweets were pulled up from the depths of his Twitter account.

One of the posts that garnered a lot of attention blatantly read, “I hate dark skinned people.”

And many remember the infamous Kodak Black interview with Essence magazine (an American publication who’s target audience is black women). The rapper was quoted saying “No I have dark skin. But dark skin women are more difficult. I like light skin women. They are more sensitive.” 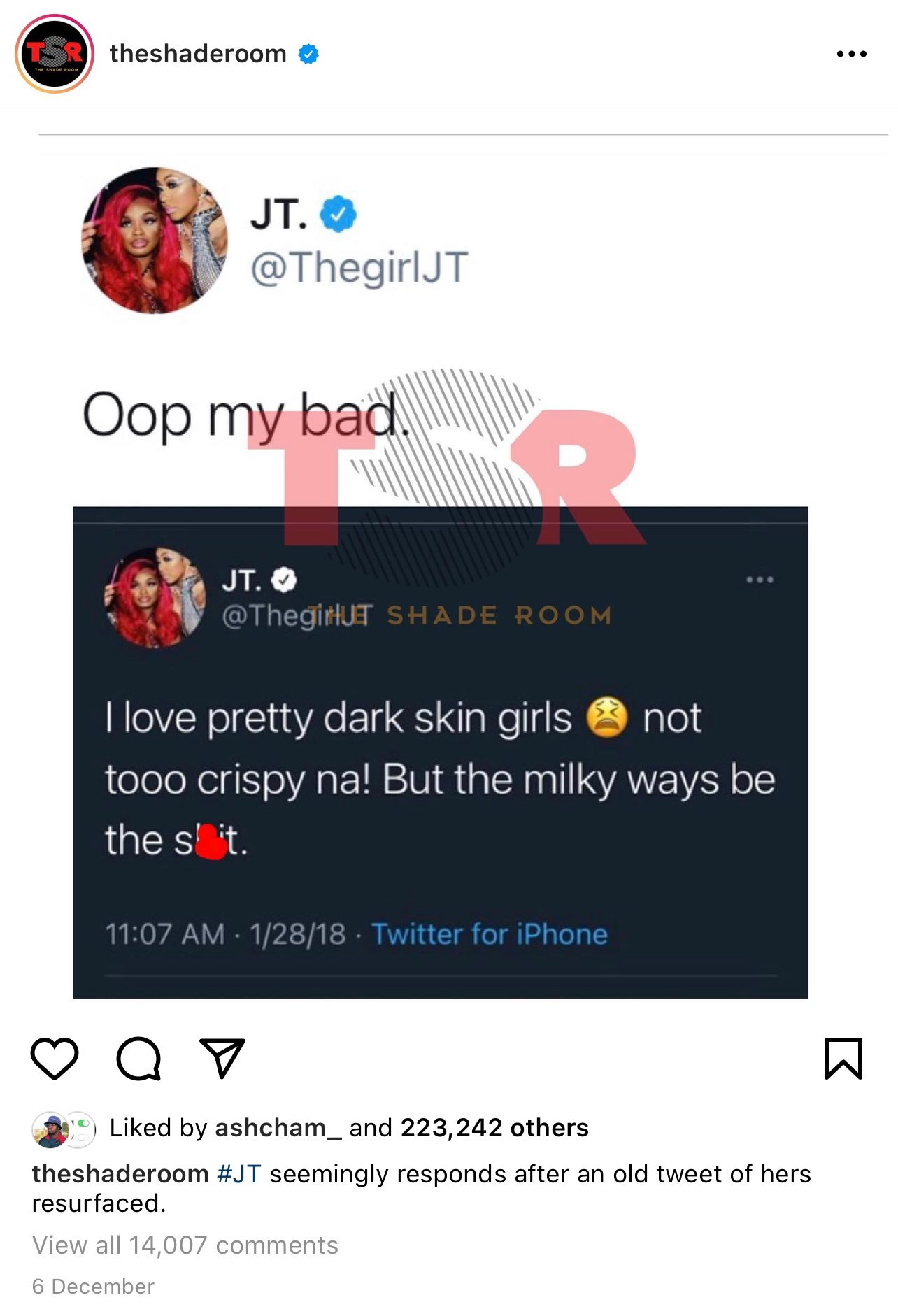 However problematic the tweets and statements above are to some people, including myself, they may not be seen as bad to someone who is not as informed on the topic of colourism or does not understand what colourism is in the first place.

Colourism is one of the products of colonialism. Once described as “the daughter of racism” by actress, Lupita Nyong’o, colourism is the prejudice that one uses to discriminate against another within their own race. This prejudice is due to someone seeing their skin tone being more superior than another one; typically, it is against a person of a darker skin tone.

Historically, within colonial societies, black and Asian people of a fairer skin tone were treated better in comparison to those of a darker complexion. The colonisers who invaded their countries often treated those of closer resemblance to a white person better, due to the idea of white people being the superior race. This led to affording light skinned people better opportunities than that of a darker skinned person.

Typically, lighter skinned slaves would work within the house serving the slave owner’s family, completing domestic tasks within the home. They were often given hand-me-down clothes from the family, fed food that was left over and, in some cases, even educated. This was a stark contrast to the field slaves, who were often of a darker skin tone. They would be subjected to outdoor tasks such as farming and general upkeep of the plantation with insufficient clothing and food.

To determine how you would be treated, they often used the brown paper bag test.

During the 19th and 20th century, the test that was carried out on black people to divide them into the two groups, light and dark. It would be carried out by comparing your skin to the colour of a paper bag.

If you were of the complexion of the bag or fairer you would pass the test. Unfortunately, if you were darker you would fail, leaving you at the bottom of society’s hierarchy.

Unfortunately, this form of prejudice is still very prevalent and is extremely visible when you look at the music industry. Matthew Knowles, Beyoncé’s father discussed colourism within the industry with the radio station SiriusXM.

He pointed out the lack of darker skinned female musicians who have great mainstream success, telling listeners, “In the music industry there’s still segregation.” He goes on to explain his statement: “If you look back even at Whitney Houston, if you look at those photos, how they lightened her to make her look lighter-complexioned.”

Knowles gave the example of his own daughter, Beyoncé and her former Destiny’s Child band mate Kelly Rowland. He expressed how he felt Beyoncé’s career was “affected” positively by her skin being lighter when compared to Kelly’s, being closer to the western idea of beauty.

He went on to say that some of the black women who have dominated the music industry all seem to be of a fairer complexion, mentioning the names Mariah Carey; Alicia Keys; Rihanna; Nicki Minaj.

Colourism impacts all aspects of life beyond just entertainment and our perception of beauty. It impacts criminal justice too. Villanova University studied a sample of 12,158 women who were imprisoned between 1995 and 2009. Their research found that on average lighter skinned women received 12% lesser sentences and served 11% less time than their darker skinned counterparts.

In some cases, like racism, colourism is not as barefaced; it can show itself in micro-aggressions. This was evident to Shea, a friend of many years who spoke to me about her experience with this form of prejudice. She briefly expressed to me that she noticed colourist micro aggressions within her own home as she was growing up.

Often hearing her mother say phrases such as “he has been bathing well”, when referring to Shea’s brother’s skin looking “lighter than usual.” She had assumed his normal complexion was that shade because he hadn’t been showering properly. In reality it was winter, and he wasn’t in the sun as much. Other times her mother would be more direct, telling her that if she was lighter, “more people would think I was pretty.”

An obvious example of the effects of colourism is skin bleaching.

Skin bleaching is the practice of lightening your skin using chemicals so your skin to appear lighter in complexion. Although, it is often used to treat vitiligo, hyperpigmentation or other skin disorders, others choose these products to lighten their whole bodies or in some cases the parts of their bodies that are usually seen by others (face, hands, legs) to obtain a lighter skin tone.

The pressures to lighten your skin often come from the idea that if you were to lighten your skin you would be afforded better opportunities. Which is not a myth, as Dr Darrick Hamilton, professor of economics and sociology at Ohio State University, found that the fairness of your skin may affect your chances of getting married.

Unfortunately, skin bleaching is not a permanent solution due to melanocytes, which is the process of new melanin being produced by special cells. Therefore, you must consistently bleach your skin to keep up with your new skin tone. However, the consistent use of harmful chemicals on your skin has repercussions.

According to the NHS, some of the consequences of using lightening creams for a long period of time is scarring, kidney liver or nerve damage, thinning of the skin, skin turning dark or too light and abnormalities in a new-born baby (if used during a pregnancy).

The skin lightening industry is set to make $8.9 billion by 2024 according to Zion. In 2017, they found the industry to be worth $4 billion.

With an industry worth this much, large companies such as L’Oréal, Unilever and Neutrogena came in for criticism, and so rebranded their beauty products by removing trigger words such as “fair”, “white” and “light” but continue to sell the products, but these words will be replaced with “even tone”, ”radiance”, ”skin clarity” and “glowing”. 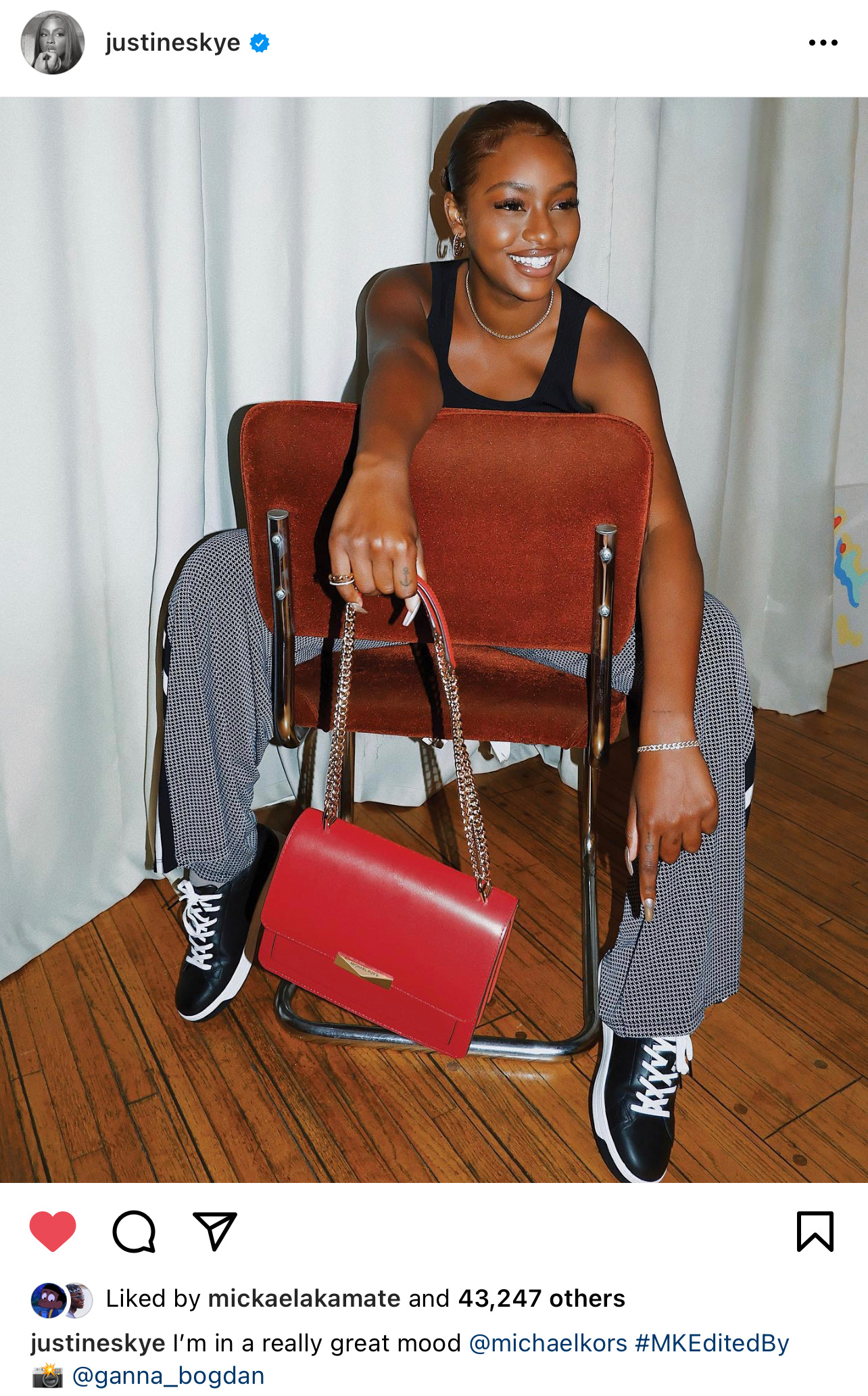 “I love her but she’s toxic. The thing is, I don’t think she saw it as toxic because when she was growing up, she saw her mum using Ponds (a skin lightening cream). It was normal to her and she adopted it into her skin care routine still to this day,” said Shea.

When Shea was asked about how colourism had affected her self-esteem as an adult, she confessed how instrumental Instagram, call out culture and “just growing up”, had impacted her perception.

When I asked why Instagram she said: “I get to see more people who look like me. And celebrate it. Which I don’t think I saw a lot when I was younger. Seeing influencers like Melissa’s Wardrobe and Justine Skye thriving on Instagram are good for my self-esteem.”

She explained to me how “most of the music videos that I watched growing up the video girls that I saw were all lighter than me. I couldn’t control what I saw on MTV and Channel U, but I can decide who I want to follow. I can unfollow them if I think that their posts on my TL (social media timeline) are effecting me negatively.”

A way people including Shea have combated this prejudice more recently is calling people out on their actions online.

“Call out culture is very different from cancel culture, I don’t think it’s about shaming people or wanting for people to no longer acknowledge them” Shea explained.

“It’s about educating them and those who come across the tweet to be aware of why their tweet is not okay. JT’s tweet was definitely not okay and social media made her aware of that without cancelling her.”