Women’s football has always lived in the shadow of the sports scene, but something is finally starting to change in the minds of spectators and people in the field.

Hope Powell, current manager for “the best club in England”, Brighton and Hove Albion, sits (or e-sits, rather) with Artefact to share all the ins and outs of her life in football and how the sport has evolved through her eyes.

“If I look back 20 years and where we are now, the gap has definitely narrowed. The problem is that the gap is the ocean times a thousand. That’s the problem, the gap,” says Powell when asked about the disparity between men and women in football.

Powell tells us that she has always been into football as she “started playing from a young age on the streets”, which eventually landed her a spot with the Millwall Lionesses and ended up with her playing for England, all while being a coach, too.

Being a woman in football has not always been as ‘easy’ as it may seem to girls who aspire to become professionals today.

Powell recalls her early days and how, culturally, her mum “did not quite understand it, being from the West Indies, she wasn’t quite sure; ‘girls don’t play football, girls cook and do all of that,’ she’d say. But, I think, as soon as she started watching and I became more and more successful, she kind of understood that it was probably a really good thing and, in the end, has been supportive ever since. She’s a really big fan and gets really upset when we lose, can’t understand why we lose when we do.”

She also tells us she was fortunate enough to have support outside of her family from people from different backgrounds that understood the culture of football in England.

Although now very successful in her field, it was never something she had planned. She initially played just for fun with the boys, and after joining secondary school was invited by another girl to try out for the team she played with. Powell was very quickly appreciated and started playing in league games where she got recruited by an England scout.

“That was my first real experience. I got the opportunity from England to travel a bit more globally. The only place I travelled abroad up until that point was Jamaica.”She remembers, at the time, there were no women footballers she could look up to. Nonetheless, there were a lot players on the TV that she used to admire; big names like Kevin Keegan, Kenny Dalglish and Ray Wilkins, “which, you know, he had the best legs in football I thought. It didn’t really matter that they were men. To me, they were just players that played and that I tried to mimic.”

I think as you get older and start understanding what’s going on around you, you kind of recognise that you have a bit of a responsibility. But that didn’t happen for years, to be honest. I just wanted to play.

Powell admits that when she was young, the lack of female representation in football did not push her to try and become someone that young girls could look up to. She recalls that she could play any sport, really, but football was the one she found the easiest. “So, it was not a conscious decision. It was simply something I really enjoyed doing, and that’s how it developed, really.

In 1998, she was youngest and first-ever full-time female national coach for the England Women’s Team and has been coaching ever since. She got her coaching qualifications very young because she “knew she couldn’t be a professional footballer, but knew she wanted to be involved in the game.”

At the beginning of her coaching career, around 17 years old, she worked for Crystal Palace Football Club where she started running holiday camps and Sunday league or “whatever it was to get some money in.”

What has always been lacking in women’s football is the status of professionalism, which is important for the protection of rights of all female players on the pitch. It may seem a very trivial aspect for those who do not follow these talented women but has been a real injustice for many years.

In 1921, the Football Association banned all women’s teams from playing on grounds affiliated to the FA because “football damaged women’s bodies”. This was up until 1969, when the Women Football Association was founded but restriction got removed by the FA only two years later in 1971, so Powell says it’s “almost like playing catch up.”

“In essence, women’s football is financed because of the men’s game being so popular. For example, Man City men are successful. They’ve got more money to spend on Man City women. That’s why it’s important for us to stay in the Premier League, because you get that finance that drips down into the women’s game.”

Powell says there has been a shift in the disparity between men and women’s football. “The gap has definitely narrowed. The problem is that the gap is the size of the ocean times a thousand.”

She continues more optimistically, saying: “now we have full-time players on decent wages, it’s so different. Today, a young girl can aspire to be a footballer. Whilst for me, I wasn’t recognised as a player, I still had to have another job. Today, the best players are recognised when they walk down the street so that disparity has definitely lessened.”

Powell also mentions she did not have a sponsor. Whilst, today, girls have sponsors and do not have to worry about the costs associated with being a full-time player.

Things have definitely progressed since Powell started out in the game as a milestone was reached in June 2020 when Norwegian footballer, Ada Hegerberg became the first female player to sign the same type of career-long Nike sponsorship deal as Cristiano Ronaldo, Serena Williams and LeBron James.

The Guardian reports that a FifPro survey of women footballers revealed that 88% of Women’s Super League players earn less than £18,000 per year and that 58% have considered quitting for financial reasons. In Powell’s opinion, “female players who retire from football today will still have to work tomorrow. Male players that retire today will never have to work another day in their life.”

On the other hand, for Powell this was never something she had considered as she goes on to say: “I wanted to work in the industry, knowing full well that, at the time, there was no provision for me to be a full-time footballer. But there was every opportunity that I might be able to stay in the game through coaching. And it didn’t put me off. It didn’t deter me.

The love of the game kept me in it and then I was fortunate enough to be given an opportunity.

After the 2019 World Cup, women’s football was getting more popular than ever. According to the BBC, TV records have been broken across the globe, including in England, the United States, Germany and China with almost 59 million people watching Brazil’s last-16 game against the hosts, France, making it the most-watched women’s football match of all time.

Asked whether this popularity has been affected by the Covid-19 pandemic, Powell says she thinks “the fans that were fans before are still going to be fans when they’re allowed back. Therefore, I don’t see that as too big an issue. I think the real issue is the safety for fans to come back; do they feel safe enough?” and she also takes pride in how clubs have kept the momentum via social media.

Likewise, she tells us about how players and staff have adapted to new strict protocols after lockdown. “Everyone’s been brilliant. We are very fortunate to be tested weekly to make sure the players and staff are safe. We stay within our bubble and we’ve all just got on with it.

Despite the unprecedented times, there has not been anything different apart from the fact that we have to wear masks and we can’t associate with anybody else. We’re in our own little bubble in the club.”

Off the pitch, recruitment for women’s football did not feel a big impact from the pandemic either, as women’s player recruitment lead, Ronald Thompson, tells us: “it has been affected solely by the finances that any club has, as fans coming through the turnstiles is what would usually boost the profits for any football club. We are still okay in terms of how we are going to recruit because our club has been able to keep backing us financially. It’s the usual context of convincing the players that we are the best option for them, their career and their future.”

A special dispensation has been put in place by the Government for elite sportspersons, and people accompanying them, to be exempt from the requirement to self-isolate when travelling to the United Kingdom.

Thompson confirms they were still running “business as usual” as he was able to travel even during lockdown to go and look at a few players in foreign countries. 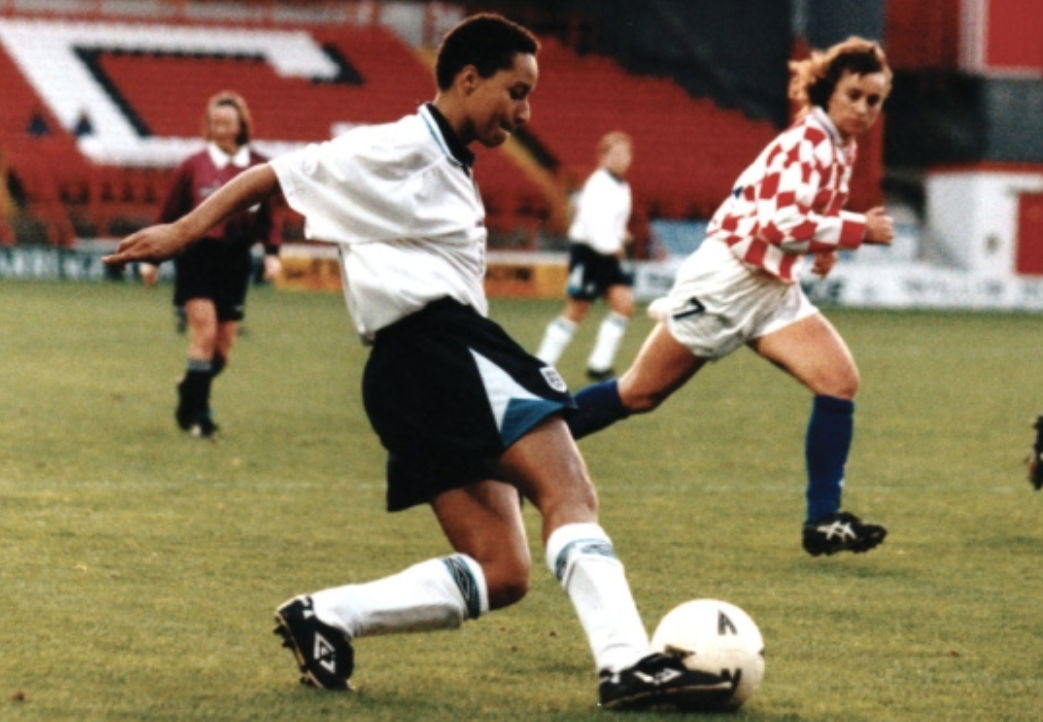 In the future, Powell hopes to see more females lead the game from top to bottom and to have a full-time championship as the men do. Lastly, she would love to see more opportunities for youth coaches to be paid a decent wage. Powell was the coach of the England women’s national football team and the Great Britain women’s Olympic football team until August 2013.

Despite these achievements, Powell is not done yet. She tells us that she would like to do one more thing;  be a technical director within the women’s game. That would mean coming off the ground, which she is determined to do as she feels like she takes on this role anyway, but jointly with that, she is still leading the team on the pitch.

Therefore, Powell would like to come off the pitch and look at the game from a different supporting angle and help the team win matches, all be it from behind the scenes.

Although the changes we are seeing in women’s football seem incremental to us spectators, viewing the bigger picture through Powell’s eyes can help us better understand how far we have really come and what is yet to be achieved.