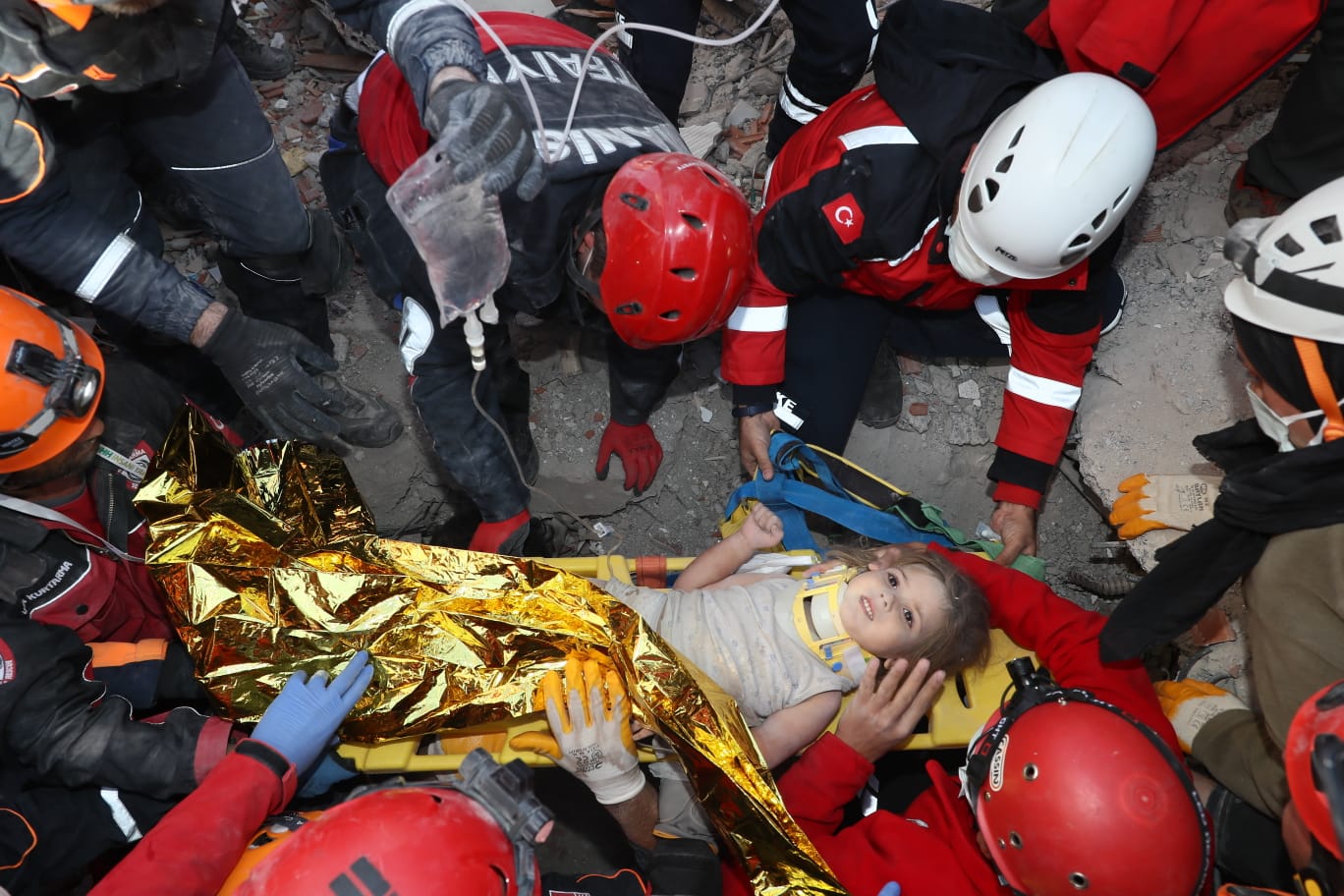 On Friday, October 30, 2020 a deadly magnitude 7.0 earthquake struck the Aegean Sea according to the United States Geological Survey – the tremor was a result of a normal faulting at a shallow crustal depth within the Eurasian Plate in the eastern Aegean Sea.

Both Turkey and Greece were badly affected resulting in many losing their homes and their lives. This is the greatest magnitude quake that Turkey has been hit with since the 1999 Izmit earthquake which resulted in over 17,000 deaths and caused damage estimated at around $8.5 million (£6.1m).

Karagül Site, Doğanlar and Rızabey apartments were destroyed in this earthquake. The reports about these buildings were sent to the relevant places, raising questions about what was done, what measures had been taken and why some people may not have done their duty.

“This is a change related to the systems used, and some economic reasons, because if it had been declared as a 7.0 magnitude, then the government would have to declare state of emergency and provide all earthquake losses here free of charge according to the state law. So, it is said that the magnitude is kept low for that purpose however nobody has officially declared this.”

According to the Turkish Minister of Internal Affairs, Suleyman Soylu, there were around six buildings that collapsed in Izmir, however, the number was later raised to 20  by the city’s mayor Tunc Soyer. The majority of the buildings collapsed in the Bayrakli district. 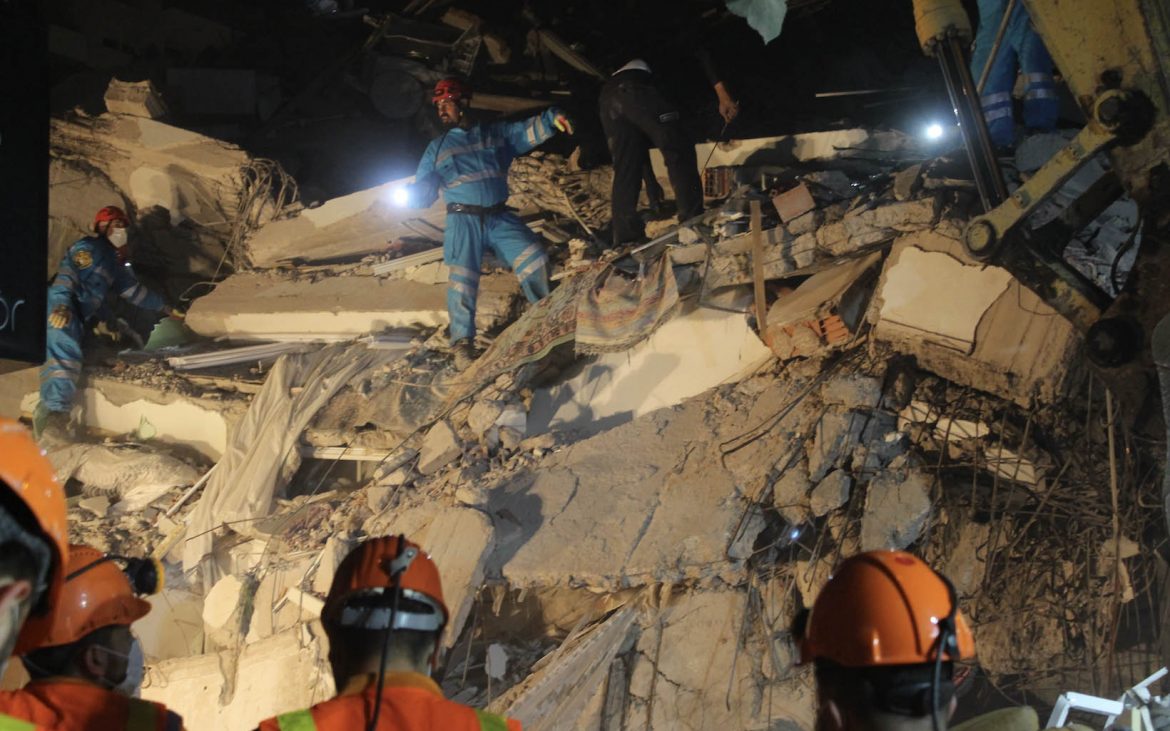 Bayraklı municipality reported the rotten structures 10 years ago. The CHP (Republic People Party) delegation who went to İzmir for earthquake investigation revealed a scandal and made striking evaluations at the press conference.

General Vice President Seyit Torun said “Municipalities inspected over 11 thousand buildings in İzmir. Bayraklı Municipality revealed 208 rotten buildings in Bayraklı including three destroyed buildings and reported them to the Ministry of Environment. why was nothing done?”

“In Izmir the destruction took place in a single area; that’s the place where the people were and the buildings were destroyed called Bayrakli area. This region was a region with agricultural land in the last century from the 1900s to the 1980s. As the city grew the lands came under development so the owners of the lands gave their land as flat equivalent.

“Some number of contractors came and parsed those lands and built houses. While the houses are being built the ground-survey is done first. According to the result, you do the concrete melting and static project and move on to other implications. According to a recent investigation held out by the police, the ground-survey was not done properly in that area,” said Ilknur.

Torun added that in 2010, the Bayraklı Municipality established an Earthquake Study Centre and identified the “rotten” and non-earthquake resistant buildings not only in Bayraklı but also in other counties.

“When hit with a hammer, the building became dust. It was falling apart; it was like a toast.”

Of 11 thousand buildings inspected in Izmir, 80 buildings in Bayraklı were found to be uninhabitable, 128 buildings needed some form of strengthening.

A search and rescue team formed by miners who had been protesting for their compensation for about 20 days in Manisa’s Soma County went to the earthquake area and participated in the rescue operation.

Independent Mineworkers Union Organisation Expert Başaran Aksu told the Republic newspaper about the impressions of miners in the region as “we are familiar with this picture. Compared to 1999, the speed of intervention has increased.”

“The chaotic picture was also quickly overcome. But, when hit with a hammer, the building became dust. It was falling apart; it was like a toast. Witnesses said that the building collapsed within five seconds,” Aksu said.

“It didn’t give people a chance who lived in the building to run out. It is so sad. When we analysed the quality of the building, the structure is a problem, both the people who built the building and those who allowed it to be built must be held responsible for these deaths.”

After the earthquake an investigation took place regarding the buildings which collapsed in the Bayrakli district. The suspects cannot be named for legal reasons, seven of them were arrested and two were released on probation.

The judge concluded that: “There is concrete evidence that the suspects have committed the crime of ‘causing death and injury of more than one person by deliberate negligence’ due to the duties undertaken by the suspects in the construction of the buildings mentioned, the incident, the result and the documents in the file.” 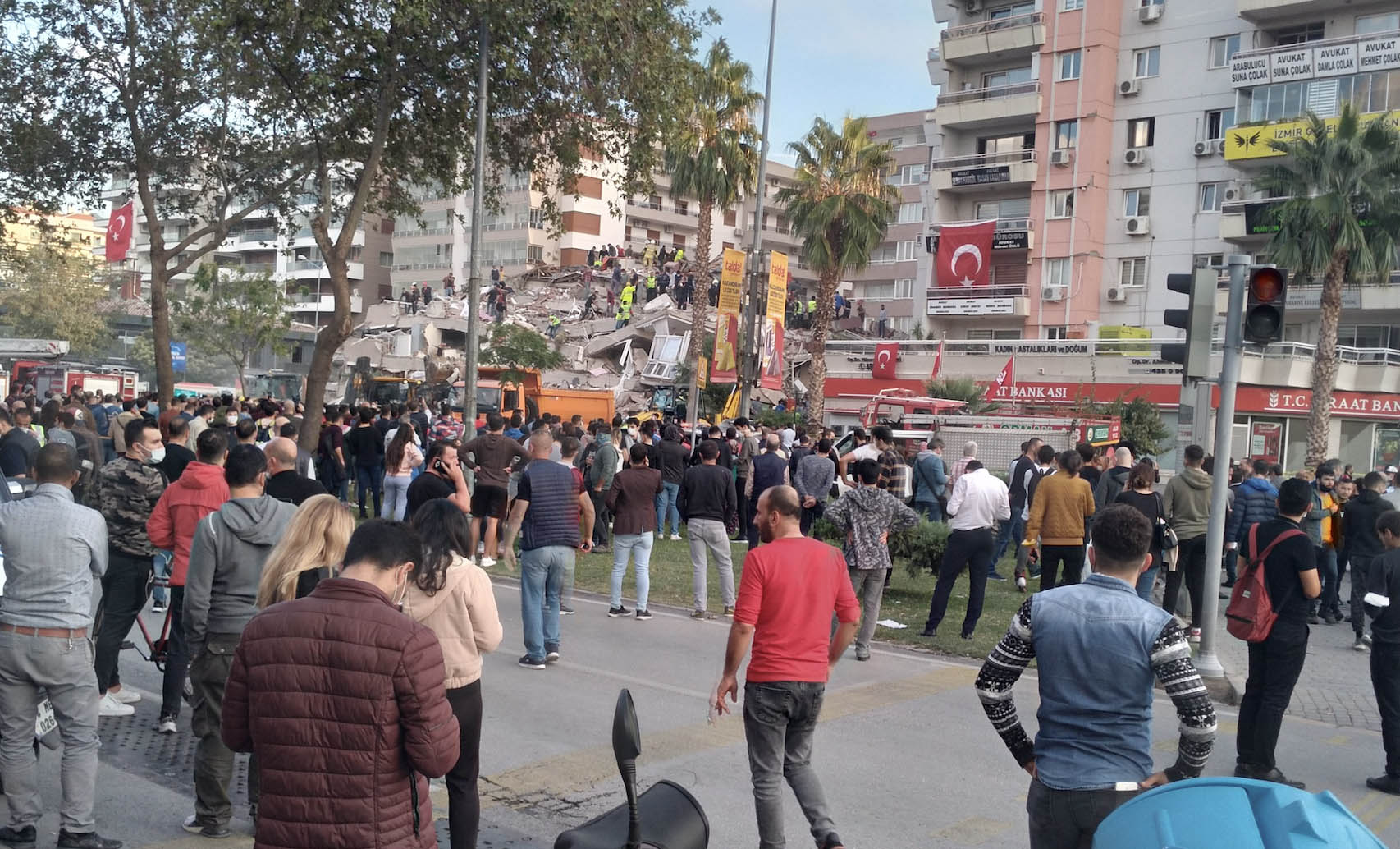 Crowds gather around an earthquake-ravaged building in Izmir. Photograph by ApChrKey.

One suspect, known as MY said in his defence that in the Yilmaz Erbek Apartment, where two floors collapsed during the earthquake, he was not a contractor, and that he was the owner of the land where the apartment was located, and the building started to be built in 1997.

Ilknur says that, “The contractor is not the only one who’s guilty. Because how the system follows is that someone examines the building, and someone must do a good and acceptable project and the council then approves the project. It’s in the form of a chain and therefore you can’t put the guilt on one person alone.”

It is not yet known why this project, which carries a high risk of collapsing, was ever approved. The investigation is still on-going.

“Some of the contractors don’t have construction engineers. People who have a little money in their hands become a contractor without any qualifications and they don’t show what is necessary. I call it ignorance. When you open a hairdressing shop you need to show some documents that show you can do the job. Unfortunately, in Turkey to become a contractor you just need money,” Unluoglu added.

As part of urban transformation in Turkey, buildings are categorised into three groups: “those which must be demolished, the ones that can be retrofitted and “buildings without earthquake risk”.

The Ministry of Environment and Urbanisation should make available information about buildings that must be demolished and rebuilt according to the data.

“The contractor, project, implementation, materials and inspections should be controlled and approved. Therefore, as 93% of Turkey is in the earthquake region a building law should be created that will gather all regulations under the same roof, reduce the number of bureaucratic correspondences, envisage punishment as well as incentive and strengthen supervision and observance,” said Battal Sengul, 43, a mechanical technician and occupational health & safety specialist.

“Accordingly, a system with a strong institutional capacity and that is functional (such as a ministry) should be established including proper ground studies to technique, planning, material resources and their qualities, smart project examination, approval, monitoring and supervision mechanism.

In 2007, a standard was imposed which required one cubic centimetre of concrete to carry a load of 200kg. In 2010, this was increased to 250 kilograms.

However, it seems that strengthening buildings and renovation in Turkey has been neglected, and as a result standards have fallen in Turkey compared to Europe.

“The buildings made with the new regulations – that were built the after 1999 earthquakes – were not damaged during the earthquake. But here in my personal opinion, I believe the problem is the labour and not paying attention to structures during manufacturing. Sometimes although the materials are of high quality if the labour is poor that will also lead to damage in building after earthquakes,” Esref said.

Ilknur said: “As an architect who has worked hard to get to where I am today, seeing people who abuse the industry for money is upsetting and I hope this tragedy has opened other people’s eyes.”