Music has been around for centuries and with each passing decade, music adapts to the culture and technology of that time. The same can be said for music groups that have changed massively within the last 100 years.

A new type of group is making waves as technology finds its way to meet with music in a very interesting way – through virtual reality groups.

These groups are unusual in the fact that they don’t actually exist in real life, well not physically but they do exist. Usually in their own unique world and this can be through games, animation, and even films.

Now more than ever, there is now a growing market of virtual groups coming into the spotlight. 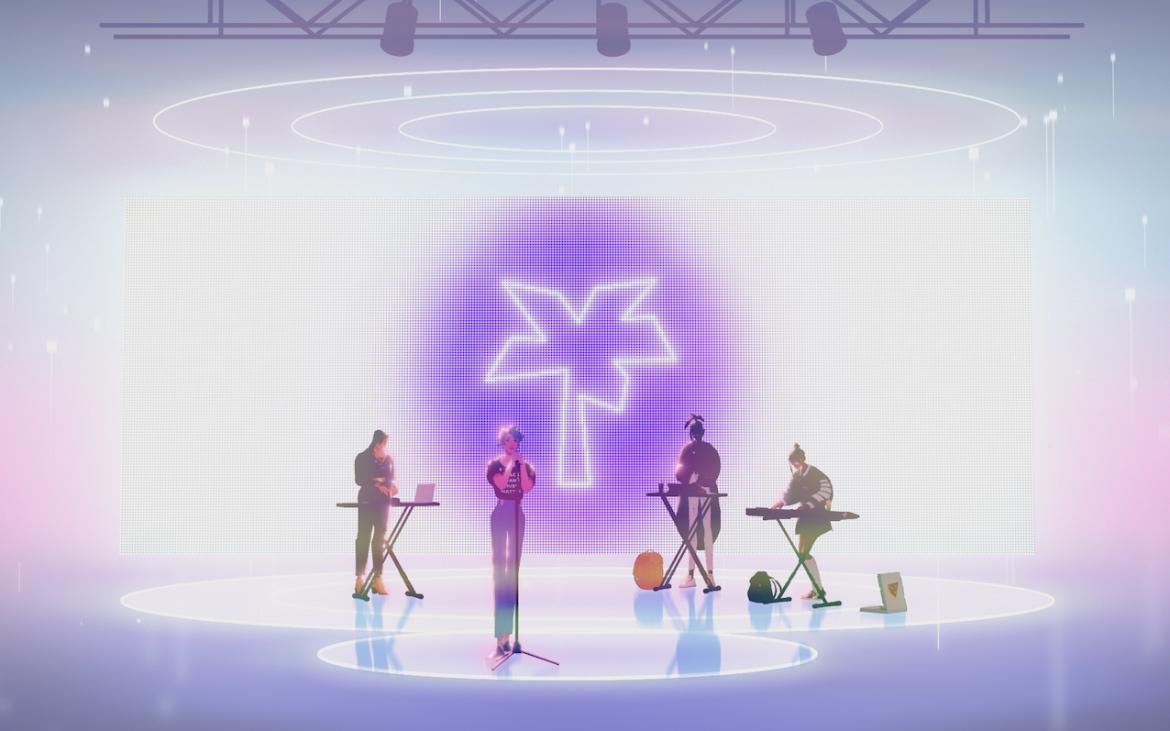 One in particular, is OFK, who made their explosive debut at the 2020 Game Awards with their single Follow/Unfollow as well as teasing their journey of how they became a group in the new interactive game We Are OFK.

Artefact got in touch with Teddy Dief of Team OFK to find out more about the anticipating debut and upcoming game release. 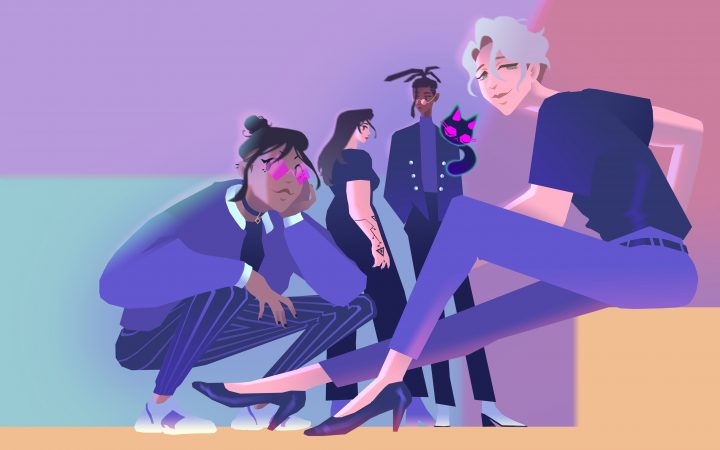 We Are OFK along with the virtual band OFK debuted at the 2020 Game Awards, how did it feel to see that happen?

“After working on this project and keeping the band and the music under wraps for the last three years, it was surreal to see them perform on stage in front of such a wide audience for the first time, and affirming to find it resonate with so many people!”

The Group’s name is OFK, is there a special meaning behind the name?

“Yes! We hint at its origin in the series, so you’ll have to wait and play to get that context.  But generally, we like to encourage everyone to find their own meaning in the name!  The whole team has been having a lovely time reading some fans’ guesses.”

The visuals for both the interactive series and OFK’s style are very colourful and pleasing, was there any reason to go for this specific style and palette?

“The style pulls reference from our art director Jenny Yu’s personal art style, and we feel it captures the energy and emotion of the story and of Los Angeles more generally – the glamour and sunshine, paired with the frequent loneliness of chasing one’s dreams. Jenny’s paintings express a feeling that the world is so large, and we can often feel so small and vulnerable.” 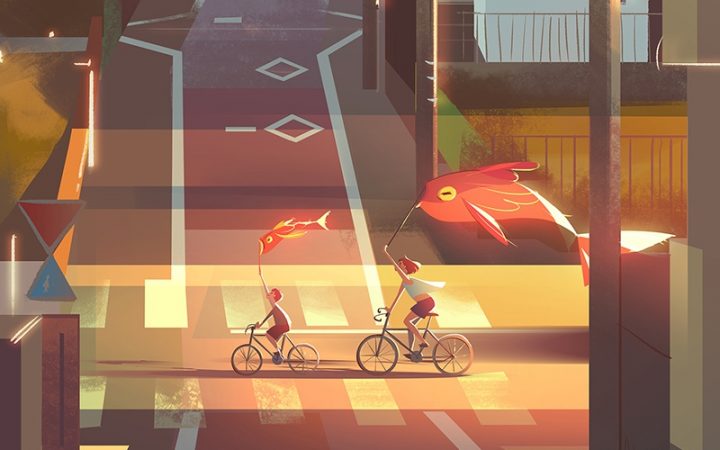 What do you want OFK to represent to the fans interested in the group and the interactive series?

“The story of OFK is the story of trying to make it, trying to create art and connect with humans and just feel okay. In telling their stories through this interactive series, we’re hoping other people just trying to get by and feel okay will feel a little less alone!

“Maybe the project will act as a bit of respite for fans as well!  We want our audience to see that the most crucial piece of making any art is the people around you, and how you treat each other.  Mutual support, respect, and empathy are what we aspire to on the team, and are values we want to broadcast.” 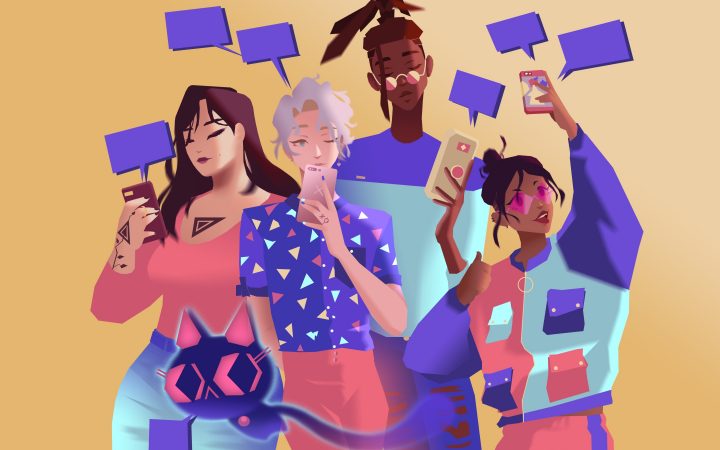 In the episodic interactive series, (L-R) Jey, Luca, Carter, and Itsumi embark on their journey as artists and as young adults. [Teddy Dief/Palmtree Team]

With the increased popularity in virtual groups over the past few years, what makes OFK stand out amongst the other groups.

“We are all, the members of OFK included, big admirers of many of the other virtual groups out there! What sets OFK apart is mostly that they aren’t pop stars (at least not yet). They’re just another group of friends in Highland Park Los Angeles, just trying to make music and hoping there’s someone out there who will connect with it.

“Our team developing the series about them, are the same – we’re not a massive corporation, thousands of people behind a virtual group. We’re 30-or-so people trying to make something together we can be proud of.”

We Are OFK is the new interactive game that features the group and their journey as talented musicians navigating life, how did this idea come about?

“No matter how far I’ve ever tried to let my imagination wander, what fascinates and inspires me most are the people around me, and how we form a connection. Living in Los Angeles one meets new people from different creative fields, interests and backgrounds, and gets little glimpses into how each came to be in this weird city, what their dreams are for the future.

“So when I came to concept this project, I was drawn to stories around the types of people I’ve come to know here – people trying to make art and live creative lives, and how they make it work as friends, lovers, collaborators, etc.

“I met Itsumi at the Game Developers Conference back in 2018 and over time she shared little bits about OFK as they formed together and went through some rocky times. Their story fits perfectly in the framework I was dreaming up for this project.”

What musicians are OFK inspired by, and how would describe the genre of OFK’s sound?

“Each member of OFK is uniquely inspired in different genres. Itsumi comes from a classical background where she errs towards the romantic and baroque era and more modern interpretations of those traditions. Jey comes from dance music where she used to DJ warehouse parties in DC and NYC.

“Luca is a pop boy, ravenously consuming anything and everything he can get his hands on, but especially lots of Hall & Oates, Queen, really anything with a great vocal hook or riff he can imitate.

“Carter is the most visual of the group and pulls their influence from the modular synth boom of the 80s and 90s; lots of industrial and IDM, Trent Reznor, etc.

“The four collaborating together with their co-writers and co-producers Luna Shadows and Thomas Powers, you can really hear each character’s influences take form.” 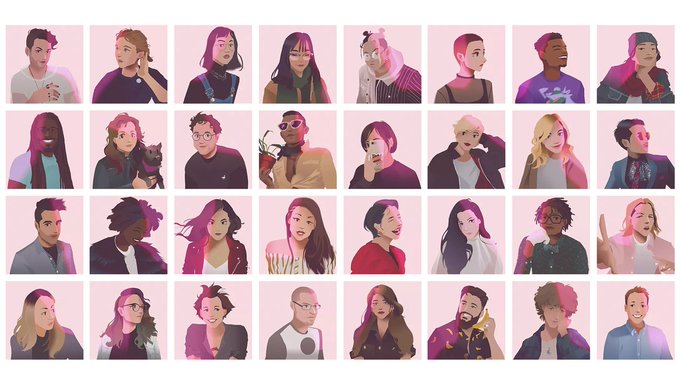 The team behind it all: Team OFK is made up of a group of talented and diverse creatives. [Twitter: OFKband]

One of the great things about this project is Team OFK which is a massively diverse group of creative people behind this, what was it like to collaborate with each other?

“Our team is incredible, they are such a joy and an honor to work with. We chose to work with people whose work we admired regardless of their location, background, industry, experience, or situation, and each has blessed us with their knowledge and expertise from their lives and realms of influence.

“Each person who has contributed to this project has shaped it in some way and this project would be, if not impossible, at least terribly boring without each and every one of them.”

Can you give us any more hints as to what we can expect from We Are OFK?

“Lots more music! A plethora of beautiful art! And an opportunity to get to know the band members better! OFK will be teasing some of the series on their social media in the lead up to the release, and to be the first to hear updates on the series, fans can join our mailing list below.”