Being nostalgic is being sentimental for past events, whether it be objects, events or clothing. For the younger generation, nostalgia seems to be quite prevalent with fashion. They are consistently emulating past trends and styles from past eras; they copy the aesthetic and pull pieces from the previous generations, which is typically the ’90s and as of late, the early 2000s.

Millennials and Generation Z have been named ‘the most nostalgic generation’ by the BBC, but how can you be nostalgic for an era you didn’t even live through?

So, why do younger generations copy these past decades so often? Is it due to the decade of not having social media or mobile phones or simply because they like the styles and want to recreate them for the modern-day?

Geraldine Wharry, a fashion futurist, public speaker and designer with twenty years of experience in the fashion industry, with work for Vogue and BBC, gave her own take on whether she thinks nostalgia has an impact on fashion.

The decade that stands out the most with popularity with fashion is the 1990s. The trends that stood out the most are the rave and streetwear styles, which are still popularised to this day.

“I’ve been interviewed about the 90s, and it’s styling for years; at parties, I feel like I am in a time warp with what the kids are wearing. They feel such a strong bond for the decade, and some of them weren’t even born at the time,” Geraldine said.

As the younger generation feel such a strong connection to this decade, Geraldine’s thinks the connection is due to how much simpler the times were.

“I feel like it was the last decade in which we were truly innocent, as although there were problems during the ’90s, we didn’t have the problems that we face today. There was no social pressure- we weren’t as globalised as we are today,there was no data tracking and no internet shaming/bullying.”

As the ’90s were so much simpler than the times of Covid-19 and pandemics, Geraldine believed that the older trends were not resurfacing due to this; it has simply been around for years.

Following this question, the times before social media and being so easily accessible to each other were times when you saw friends/family more. Indicating that the new generation is too connected at all times.

“It was just a different time. There were no smartphones, but I’d call my friends, or we would show up at each other’s houses. Everyone is too hyper-connected now, yet it is impossible to make plans. I saw my friends in the ’90s and early 2000s way more than I do now.”

According to the writers at The Polished Pearls, trends tend to repeat every 20/30 years, so perhaps the use of imagery on the internet can influence trends repeating.

“Fashion has always been cyclical, but I think with the internet and social media since the ’90s, there has been a greater understanding of previous generations because they’re as a collective memory through photos/videos that are seen on social media,” Geraldine said.

Brands have benefited from the ‘nostalgic generation’. In the past few years, designer brands have brought back the most loved bags from the ’90s and early 2000s. 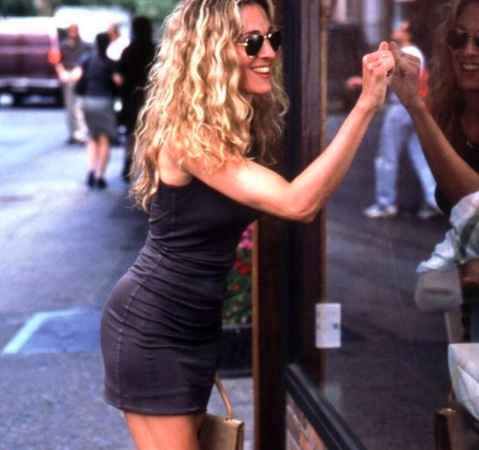 Sarah Jessica Parker as Carrie Bradshaw in Sex and the City, 1999 [Instagram: @90ssclassy]

“It’s something that fashion houses will do. They have a collection that they have archived, and the best selling bags will always get updated and relaunched. Trend forecast books will show past years for design inspiration, and designers will always go vintage shopping if they have an idea to update a collection,” Geraldine explained.

In the next few decades, perhaps it could be possible that the 2010s/20s could be the era that the younger generation of that day takes inspiration from.

“It’s possible that someone can look back on our era to try to figure out why it was like it was and pick out the most popular trends. Some decades are picked up a lot more than others; for instance, the ’30s/’40s weren’t as popular, whereas the ’50s/’80s have always been so popular, which is interesting. The ’90s weren’t as exciting style-wise, and it’s fascinating to me that it began such a thing for Generation Z,” Geraldine told us.

There have been Instagram accounts specially dedicated to past nostalgic imagery and pop culture at the time. These accounts include @90ssclassy, @90sanxiety and @_90sart_ which all have a cult following.

The Instagram account @90ssclassy is run by Yeraldy Nuñez and has 500,000 followers. She posts images from the ’90s of different memorable pop culture moments, for instance: the television show Friends, shots, runway shows and the movie Pulp Fiction.

Yeraldy decided to create her account due to growing up around this era and finding it inspiring.

“I grew up on TV shows and movies from the ’90s, so I think I have always loved this decade and what it represents. I love how different and simple everything was back then, especially in movies and fashion. I started noticing all the different aspects from today; I think that’s why I wanted a platform to express my love for this era,” she said.

The take that Yeraldy has on nostalgia is similar to Geraldine’s that the ’90s has had a big impact on this generation.

“Nostalgia is a huge factor. This era, in particular, seems to have a great impact on today’s generation. People are bringing back all these fashion trends that we saw in TV shows and movies like Friends or Clueless, and I think that’s pretty cool.”

Although there is more to the account than the case of nostalgia, Yeraldy makes sure the posts specifically fit the account.

“Nostalgia is critical, but I think it is more than that. It’s the way you collect all the past information and present it to an audience. For some reason, I feel really comfortable posting “classy” runway looks or minimalist fashion photography. There’s always a part of me behind a post, and I’m glad my followers love this kind of style as much as I do.”

For Yeraldy, the account is overall to show what the ’90s were and to celebrate past events.

“I truly believe this generation wants to pay tribute to the ’90s and learn more about the past. Nowadays, we see many celebrities trying to recreate 1990s fashion wearing iconic dresses from that era or companies making reboots of cult classics, and people love that and obviously want more of that. It awakens curiosity and makes us want to celebrate this decade 30 years later, which is great.”

The simplicity of the ’90s is missed by all the generations, even the ones that weren’t born during the time. By the sounds of it, trends will resurface every few years, although the 1990s will be around for a while longer.