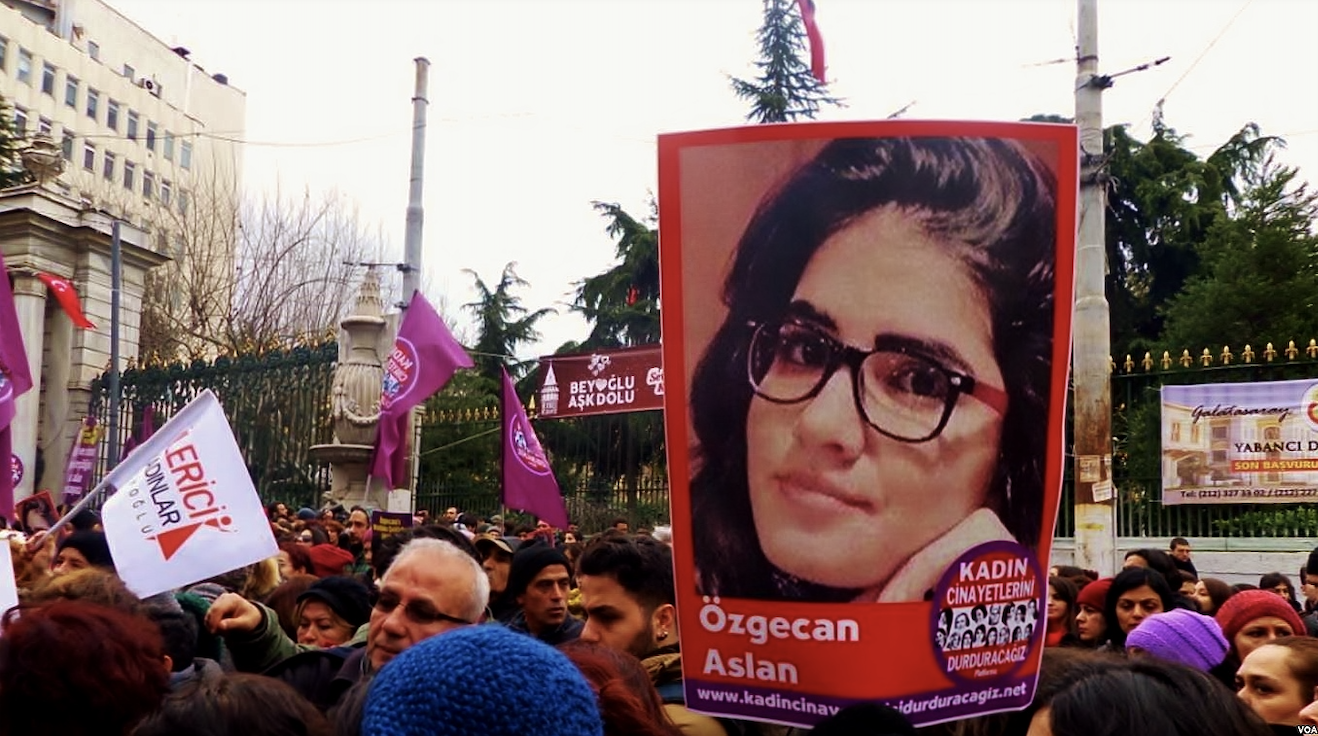 As international women’s day on March 8th, approaches, the discussion around domestic abuse is still very much a hot topic, amid concerns that femicide – gender-based killings – are a growing issue in Turkey.

According to a poll conducted by the Hurriyet Daily News, 34% of Turkish men believe that occasional violence towards women is necessary, and 28% of men say that they believe violence can be used against women.

The figures have increased steadily year by year, according to statistics provided by We Will Stop Femicide, 121 women were killed by their partners in 2011, and by 2018 the numbers had more than tripled at 440 women murdered.

The problem is getting worse year by year, there were 474 women who were killed by someone they knew in 2019 alone. These murders are more commonly known as ‘honour killings’.

A prevention strategy study done in 2009 revealed that 42% of women between the ages 15 to 60 have been a victim of some sort of physical or sexual violence by their husbands or partners. 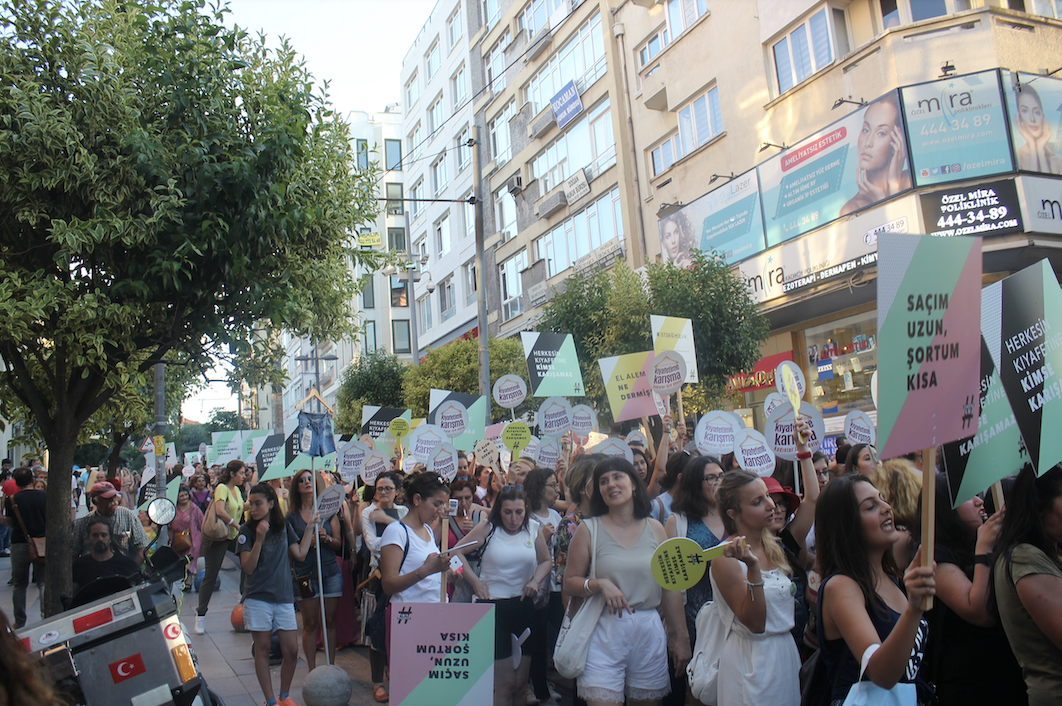 Marchers on the ‘Don’t interfere with my clothes (Kiyafetime karisma)’ protest in Kadikoy, Istanbul in 2017 [Wikimedia: Neslihan_Turan]

In 2011 Turkey was the first country to adopt a Council of Europe convention regarding violence against women and domestic abuse; known as the Istanbul Convention, its aim was to protect victims and prosecute the offenders in an effective way.

However, it wasn’t long until a basic right put in place to protect women was threatened by the current President Recep Tayyip Erdogan, whose Justice and Development Party (AKP), tried to undermine the legislation as it ‘threatens traditional family values’.

Other members from the AKP also petitioned to revoke the Istanbul Convention because they claimed it encourages ‘immoral lifestyles’ and women divorcing their partners.

The current government party have been in power for over a decade and the coincidences between the rise of violence against women in the past decade cannot be overlooked.

The government play a role in this biased culture against women, having a proven track record of things they’ve said on record regarding women and their place in society.

The current president Recep Tayyip Erdogan said in his speech at the first International Women and Justice Summit: “It is against nature to bring men and women to an equal position.”

Erdogan wasn’t the only one to make remarks about equality amongst men and women. Former minister of Finance, Mehmet Simsek, said in a speech about unemployment: “You know why the unemployment rate is increasing? Because more jobs are sought in times of crisis. Particularly among women.”

Melih Gokcek, the mayor of the Turkish capital Ankara, expressed his view on women in a television interview he attended on Samanyolu Haber TV saying: “If the mother is raped, why should the child die? What is the child’s sin? The mother should die.”

“It is against nature to bring men and women to an equal position.”
President Erdogan

The government plays a role in this bias culture against women. Women are seen as ‘objects’ and from a young age they are taught that their duty is to their husbands or the men in their lives.

Adile Dogan, works for a women’s association, Esenyali Women’s Solidarity Association, and has come across many women, with many stories.

She met a mother of seven, whose name can’t be revealed for legal reasons, who has been married for 27 years and is currently requesting a divorce.

The mother was married off at the age of 12 as a berdel, which is when a girl’s older brother gets married and the girl is then married off to the bride’s brother, a type of swap or exchange.

At first she refused, then the parents called in an ‘religious man’ to talk to her and convince her to accept getting married. This ‘religious man’ scared her into accepting by telling her that she will become blind but then years later it came to light that that man was not a religious man at all.

She was married at the age of 12 and had her first baby at 13. A year later she had her second baby who was killed by her husband, who hit the baby on the floor. He was not charged with the baby’s murder.

The woman said that all seven children were a result of rape, and at no point in her marriage did she want to be with him intimately. The husband does not work and as well as looking after seven children she provides an income to the household by doing cleaning work.

One day, after saying she didn’t have any money when her husband asked, she was beaten so badly that a hole was opened in her stomach, after complaining to the police her family intervened and pressured her to take back the complaint.

However, due to the severity of the abuse, he was fined with 4000 Turkish lira, which is equivalent to about £400. Due to the fact that the husband doesn’t work, she had to pay the fine herself.

Even an innocent children’s TV show has a role to play in this. In the TV show Pepe, the family has different roles. There are three kids, Pepe’s mother works but when she comes home from work her job starts at home, she prepares dinner and the father never helps her.

Pepe also has a sister and while Pepe is playing ball with his friends outside his sister stays at home and learns how to cook from her grandmother.”

“If the mother is raped, why should the child die? What is the child’s sin? The mother should die.”
Melih Gokcek, Mayor of Ankara

With the pandemic in 2020, lockdown regulations and rules were implemented in Turkey, and the figures on domestic abuse are expected to increase.

However, what’s more worrying is the fact that nearly 90% of women do not come forward or seek help from any organisations.

“Women have an unfortunate position in Turkey. They can’t speak out because they are scared. If they speak out, they will have to pay the consequences. First, if they did speak out what will happen is their parents won’t want them back and if they do there’s pressure from the family. Women can be told things like ‘he is your husband he will love you and beat you’,” Adile tells us.

“Women start to believe that he may be jealous, he works and when he comes home tired two slaps won’t hurt you. Some women believe that violence is a normal part of their life or that she deserves domestic abuse which is sadder.”

The legal age for marriage in Turkey is 17, however, children as young as 12 can be forced into an arranged religious marriage not ordained by the government.

This leads to the child falling pregnant within a year or two, and dropping out of school, so the girl has no education where she can then later go on to find a job to provide for herself. Women often find themselves financially dependent on their husbands.

“They can’t speak out because they are scared. If they speak out, they will have to pay the consequences.”

The women’s shelters are ‘terrible’ and have become ‘worse’ since the pandemic. However, a woman who is seeking help and has no family doesn’t really have a choice.

“Shelters are not enough for the women’s needs, for example, a woman with a baby needs baby food and the government should support them but there is no support. The woman then has to buy the food with her own money,” says Adile.

The lack of support for the shelters seems designed to ‘push women back’ to their husbands. There are two steps to the shelter system, the first women are put in shelters with access to therapy and are like treatment centres where the woman is asked if she plans to stay there longer, if she says she wishes to stay longer she is then sent off, which could be anywhere in the country and she’s left to fend for herself.

“When the women leave the shelter, she is on her own, she has nobody, that’s why the government wants them to go back home so they don’t have to spend money for them.”

The story of the mother of seven is only a story of one woman, there are thousands of women who go through similar or even the same treatment in their life. It is a constant survival.

“Women in Turkey are exposed to extreme violence,” Adile concludes. “They should learn their rights as only this can save them. Not only in Turkey but all over the world. We need equality. The equality of women and men.”