The beauty of modern-day technology makes life in the midst of a pandemic a little bit easier, especially for young people.

Indeed, for most young adults, social interaction and meeting new people is one of the many highlights of freedom as well as the ability to be your own person.

However, living in a pandemic has meant that the day-to-day behaviours of many have been altered. Life has to be lived virtually as almost all of our social communications are conducted straight through our mobile phones. This has had a significant impact on the way in which people are dating.

With no definite time frame of when ‘normal’ life will resume, it is difficult to expect people to put dating and regular life on hold.

Online dating, although not a new phenomenon, has become the most convenient way to make relationships in this digital age.

Research conducted by the Future of Dating report in 2019, utilising data from e-Harmony and birth rate projections from the Office for National Statistics, found an estimated third (32%) of relationships between 2015 and 2019 to have started online, compared to only 19% between 2005 and 2014.

The research also estimates that by 2035, 50% of couples in the UK will have begun their relationship online, it would be very interesting to see what impact COVID-19 would have on this figure, and if we will reach 50% much sooner than predicted.

Further research by the renown dating platform e-Harmony and the Imperial College Business School identified that the year 2037 will be the year when the majority of babies in the UK are born to parents who met via the internet, which includes social media apps such as Twitter and Instagram.

Three singles from different walks of life shared their stories, which provide insight into their varied dating experiences when answering the same questions about dating in the midst of a pandemic.

One 31-year-old American, Joy, who lives in Seattle considers herself “a little bit of both” when asked if she would describe herself as introverted or extroverted? Whilst 25-year-old Italian-born, Fabio Impellizzeri described himself as being “definitely an extroverted person’.

Meanwhile 23-year-old Carmelia noted that she would consider herself “a little bit of both, but [she] leans more towards the side of an extrovert, and further described herself as someone who is “fun and bubbly”.

When asked if she feels any form of anxiety or drawbacks from dating online, Carmelia said it makes her “more anxious than at ease as [she] doesn’t know if [she] is getting catfished”, a term commonly used for people who portray themselves to be someone they are not on the Internet often by using other people’s images.

Joy shared similar sentiments with Carmelia as she finds herself experiencing “slight anxiousness especially if it’s someone [she’s] interested in and want to make a good impression.”

However, on the other side, Fabio feels as though “talking to someone online doesn’t make [him] feel anxious, but it doesn’t feel the same”.

The same research by the Future of Dating report identified that around 47% of people in the UK felt as though the internet makes it easier for introverted people to meet a partner as it limits face to face interaction, allowing individuals time to think and formulate responses to conversations in their own time.

This is evident with all three singles who all find themselves leaning towards being more extroverted. 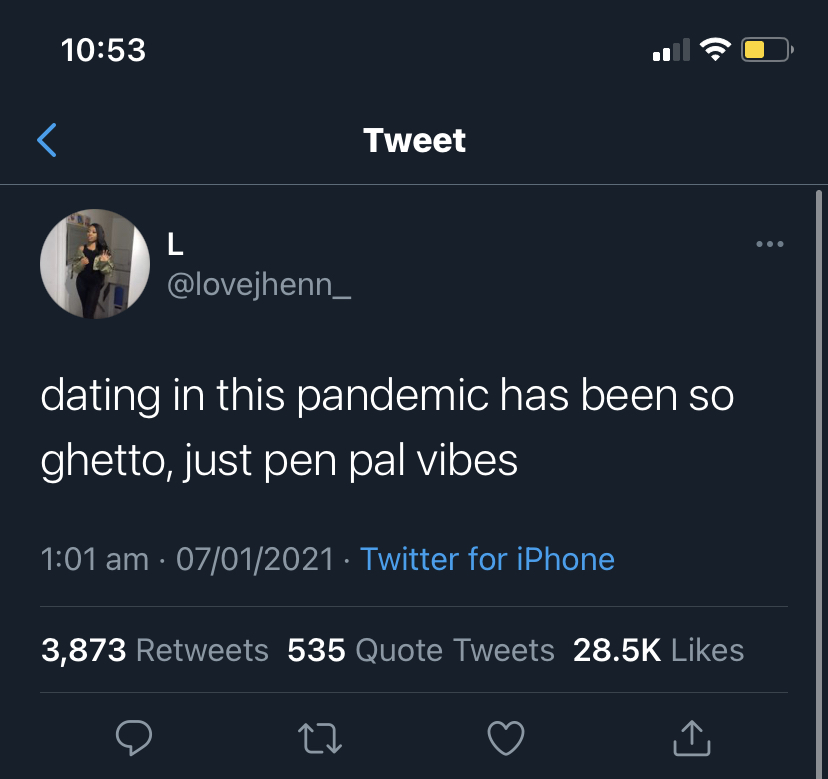 Although the pandemic and lockdown restrictions place limits on what people can do, we are able to have in-person meetings as there is a variety of dating apps that have made it possible to overcome some of the limitations by offering a video calling feature.

Apps like Bumble, Badoo and The League added with other mobile apps that are not specifically tailored to dating, such as: Snapchat, Facetime, Skype and Whatapp – these can be tools utilised to achieve a virtual version of in-person meetings.

When asked about utilising the video calls as part of the dating experience, Joy found this to be an aspect she is “uncomfortable with, because it can be awkward especially when it’s the first-time meeting/ talking”.

Whilst both Fabio and Carmelia see video calls to be a more “direct” way of speaking and getting to know someone.

Confidence is a major factor as well as the reason to why many people opt to dating online, the idea of being behind a screen and the luxury of replying when you please mean in certain circumstances some people may create a persona of who they ideally want to be, not exactly who they are

“Everything is fake [online], most of the time you say things just to keep the conversation going,” Fabio reiterates these sentiments.

Online dating has heightened the idea of presenting your best self to the person you are speaking to as it is human nature to want to be “liked by someone, since it can make you hide parts of yourself” things that “you may feel like are undesirable” which once again leads to the conversation of catfishing; so much so that there’s a TV show based on this, produced by MTV.

Living in lockdown with very strict restrictions on the social interactions has meant that the dating landscape has changed drastically in a short space of time, so much so that people have had very limited time to adjust.

The luxury of choice has been revoked, evidently, this has been a struggle for many, since individuals took to Twitter to express how hard it is to date in the midst of a pandemic.

Users have shared their views on dating by referring to it as a ‘talking stage’ describing the act of getting to know someone in the early stages of dating.

One user asked her followers: “Anyone else had a new talking stage every week during lockdown or is that just a me problem”?

Unfortunately, it is not just her own problem as another user expressed “dating in this pandemic has been so ghetto, just pen pal vibes.”