“When the president condemns a free press, you are hearing the words of a tyrant,” is a famous quote which has been around for centuries yet still applies to our modern society.

Turkey is one of the highest-ranked countries regarding governmental media control and censorship. It is also is the country that has the most journalists in prison. From 2010, the freedom of press in the country has deteriorated steadily over the years.

According to the Washington Post, Turkey accounts for one third of all-journalists imprisoned around the world, while the Committee to Protect Journalists even ranked Turkey to be the worst ‘journalist jailer’ in 2012 and 2013, where the country was ranked ahead of both Iran and China, after 49 journalists were arrested and imprisoned during those years.

According to Twitter’s transparency reports in 2014, it was revealed that Turkey requested content removal five times more than any other country. This request then saw a 150% rise in the following year.

Media censorship can happen for a number of reasons, whether it be personal reasons such as journalists fearing for their own safety or the security of their jobs, to the impact it may have on certain relations, such as with the government.

Governmental control over the Turkish media has been a rising issue over the years, and is getting steadily worse each year. 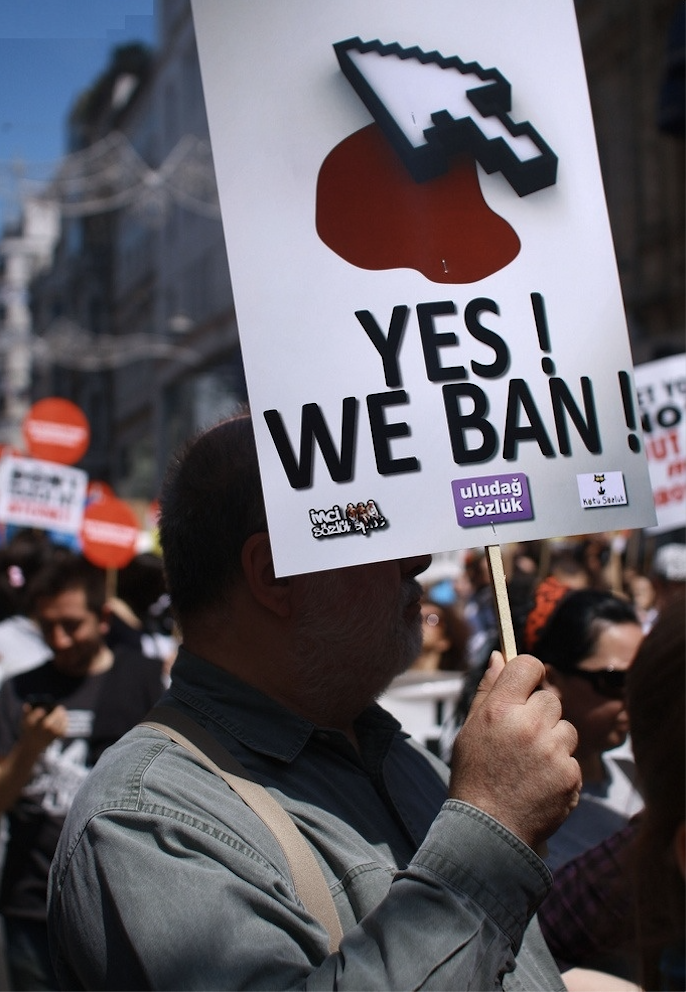 Cagri Sari is a journalist at Evrensel newspaper and Turkey Journalists’ Trade Union Leader in Istanbul: “During my 15 years career as a journalist, I have witnessed and heard from my colleagues, we saw every kind of censor between the years 1990 to 2000. But I can say that we are having the worse censorship from this government. So, media, journalist, lawyers even the unions lost their freedom because of AK party.”

According to Turkish law, the freedom of the press is protected by the Constitution of Turkey, under Article 28, it says the press shall be free and not censored. But, these laws are not regulated and followed by the government themselves. “Crimes that are against the constitution, against human rights and against international laws are committed,” Cargi told us.

When we look at England for example, or any other European country, there are many news organisations, communities and unions available for journalists, however, the rates for Turkey in comparison are much lower.

“As time passed, pressure increased against the media and journalists, that’s why the unions and communities started losing power,” Cargi said.

In the process of becoming a journalist in Turkey, going to university or landing a job is not enough. To be able to practice journalism in the country reporters need a press card.

However, press cards are not provided by the unions or employers but rather the government. “If I make news the government does not approve of they may not give me a media card,” Cargi confirmed.

This can lead to many injustices, and more indirect censorship in the media. Although, many press and news organisations have tried to prevent this, however, it has ended in with journalists being psychically attacked, threatened, and arrested.

One of the biggest issues journalists face while doing their job is the risk of being arrested. Since the attempted coup in 2016 the freedom of press has since decreased.

Many NGOs were closed down, media organisations were either seized or shared the same fate as NGOs and many journalists – media employees were arrested.

Journalists faced prison time under Article 299 of the constitution: “Anyone who insults the president of Turkey shall face imprisonment for one to four years”, although this article was rarely used before president Recep Tayyip Erdogan came in power.

Alternatively they may be charged under Article 301 where it is illegal to insult Turkey, the Turkish nation, Turkish government institutions, or Turkish national heroes or Article 312, promoting religious or racial hatred.

“If we write a story we can face the police, and the trial process can make us terrorist or accuse us of insulting the president and after all this you go to jail.

“In Turkey 180-200 journalist were jailed, today 57 journalists are in jail according to our trade union report results. For example, there was a trial last week a journalist sentenced for 20-year prison sentence because of an article they wrote,” Cargi confirmed.

“At Newroz in 2016 a young boy argued with the police and he run away from them, while he is running the police shot him from the back. Next day on the news we heard that the boy was a bomber but the journalist was around when it happened so he filmed everything and took pictures.”

The evidence suggests that the boy, Temel Korkut, wasn’t a bomber and the police never tried to stop him but instead it’s claimed they just killed him, and the proof of this lies in the photographs taken at the time. But it’s the journalist that is now on trial for “propelling the people to hatred and hostility.”

“The worst thing is here they freed that police and he is walking freely. And the journalist who proved what really happened with the photographs he took, became guilty and was sentenced to 20-years in prison. What would happen if Abdurrahman didn’t take the pictures?” Cargi asks.

A second major concern is the number of journalists that are being killed. Where since the year 1995 many journalists died in police custody, often after being beaten by police officers.

Although some of the deaths were ruled as suicide, the families claim that the victims previously received death threats and were violently assaulted. 33 journalists died between 1990 and 1995.

[pullquote align=”right”]“There was a trial last week a journalist sentenced for 20-year prison sentence because of an article they wrote.”[/pullquote]Journalists have also suffered from a variety of injuries from tear gas, to physical assault. After the death of an Armenian journalist Hrant Dink, who was killed in Istanbul, a list was published by the Turkish Association of Journalists which revealed the names of all the journalists killed from the early 20th century to 2015; it contains 79 names.

“I was nearly sent to prison for six years. But I was lucky and was freed. Journalism is considered a dangerous line of work in Turkey along side mine work,” says Cagri.

“So, in the middle of the night police can force entry to your house. We can get dragged on the ground and get handcuffed. We have friends imprisoned for a year and still don’t know why he was sent to prison.”

A television channel called OLAY TV began broadcasting in November 2020, the value behind the channel was that they believed in democracy and freedom of speech, promising to tell the truth.

It was only a month until owners couldn’t handle the on-going pressure and had to close the channel on December 25, 2020. This then meant that nearly 180 journalists were unemployed.

“The owner of the channel has factories and he was threatened by the government so he thought he won’t be able to earn money so, he stepped down,” says Cagri.

Despite this, Cagri remains optimistic: “I’m sad with what’s happening in Turkey, I’m sad but I’m still hopeful, I believe things will change.”

By Rebecca Keen
4 Mins read
Ethno-jazz band Derya Yildirim and Grup Simşek take us back to the 60s with their modern take on traditional Anatolian folk.
Entertainment

By Shannon Casey
4 Mins read
Viewers of the new Blonde film on Netflix have major concerns about the way that women like Marilyn Monroe are portrayed.
AudioLife